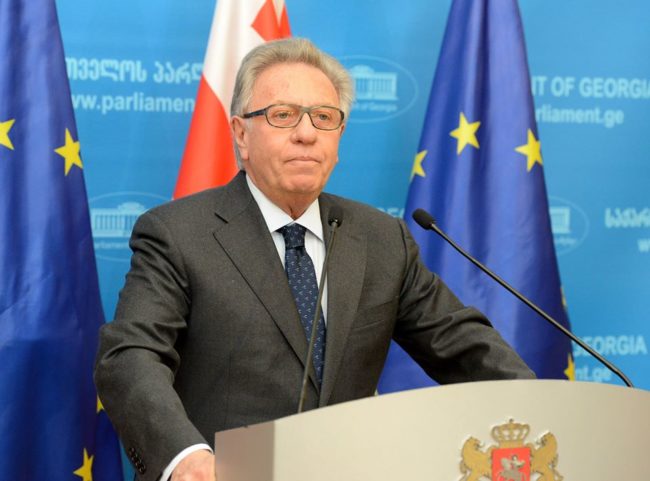 The head of the Council of Europe’s Venice Commission has criticised Georgian authorities during a visit to Tbilisi, after Parliament voted to adopt constitutional amendments in their initial hearings despite objections from opposition parties.

Gianni Buquicchio, who heads the advisory body of independent constitutional experts, told journalists on 29 June that he was disappointed, as the political process surrounding the constitutional changes was at a ‘dead end’.

Education Minister and Deputy Prime Minister Aleksandre Jejelava hit back at the media, claiming they had misreported Buquicchio’s statement by focusing on the word ‘disappointment’, which he said could be interpreted as a ‘strong word or a weak word’.

Buquicchio responded later the same day, by reiterating that he was becoming ‘more and more disappointed’ with recent developments in Georgia’s constitutional changes.

According to Energy Minister and Deputy Prime Minister Kakha Kaladze, the ruling Georgian Dream party agree with Buquicchio, and are planning to continue cooperation with the commission and are ready discuss changes with opposition parties.

Prime Minister Giorgi Kvirikashvili said on 30 June that Georgia ‘will have a constitution which has been refined with the political will of the Georgia Dream team, and it will be in accordance to the highest democratic standards in the world, especially in Europe’.

Kvirikashvili added that the changes were a big step forward on Georgia’s path to democratic development. He said he had expressed a ‘willingness and readiness to continue working with the Venice Commission’.

After meeting with local civil society organisations on 30 June, Buquicchio said he was ‘a little bit optimistic’ as he thought ‘there is ground for compromise’. Non-governmental organisations can ‘make a very important contribution’ to solving the problem, he claimed.

One of the central issues of the the constitutional changes is a shift to a fully proportional electoral system. Parliamentary elections will be held under a fully proportional system only after 2024, and not for the 2020 elections. Buquicchio said he was saddened by GD’s decision to delay the shift.

Parliament adopted the constitutional amendments in their first and second readings on 22 and 23 June with 115 votes for the changes. No MPs from opposition parties voted with the Government. Parliament will now vote on the changes in their third and final hearing.