The Kajarova sisters, 68-year-old Fatma and 72-year-old Tukazban, have been helping their grandmother weave carpets since childhood. The sisters have lived their whole lives in the village of Kosalar, located in the southern Georgian region of Kvemo Kartli.

The Borchalo carpets they weave are made only in Kosalar and the village of Iormughanlo, in the neighbouring Kakheti region — only a few dozen women carry on the carpet weaving tradition.

Weaving carpets by hand is a long and laborious process, with the average carpet taking at least two women working between one and two months — the difficult nature of the work means the tradition is left almost solely in the hands of the elderly.

‘There are now very few women left in our village who weave carpets, and it’s very rare for anyone from the younger generation to be able to make a carpet from start to finish’, Fatma said.

Borchalo carpets have a centuries-old history in Georgia, and are decorated with unique and complex symbols to express a variety of often abstract concepts such as the strengthening of the family, its protection, or even migration.

According to Tukazban, there are only around eight to ten families left in Kosalar where the women are involved in carpet making, though for some it is not out of choice but of necessity.

‘Everyone has cattle and people grow their own fruits and vegetables. But the water is often unavailable, so we cannot grow fruits and vegetables to sell’, Fatma said. ‘Because of the lack of work, some women are engaged in carpet weaving to take care of their families’.

Unfortunately, even carpet weaving has been affected by the pandemic, and, according to Fatma, the number of orders they’ve been receiving has halved.

‘While before we used to weave up to 10 carpets a year, now that number has dropped to a maximum of five’, she lamented.

In previous years, the most difficult aspects of weaving a Borchalo carpet included dyeing the yarn. Though now, pre-dyed yarn is imported from Iran.

Tukazban and Fatma are among several dozen women who work for reWoven, a social enterprise founded by the late Ryan Smith. Smith and his wife arrived in Georgia in 2011 and created the organisation to help revive the tradition.

In 2018, tragedy struck, after the couple and their 4-year-old son were murdered. Malkhaz Kobauri, a shepherd convicted of this murder, is currently serving life in prison for the murders.

In order to preserve the Borchalo carpet weaving, the Solidarity Museum, a Georgia-based NGO that promotes the preservation of the culture of the country’s ethnic and religious minorities, launched an advocacy campaign in 2020 to have the carpets recognised as a Monument of Intangible Cultural Heritage in Georgia by the government.

‘We want Borchalo carpets to be given the status, so that the culture created by ethnic minorities in Georgia is recognised as Georgia's cultural heritage’, the NGO’s head Elnur Alisoy, who is also the acting director of reWoven, told OC Media.

Citizens of Georgia, Alisoy stressed, regardless of their ethnic origin or religious beliefs — Georgia’s ethnic Azerbaijani community is predominantly muslim —  form part of Georgia’s civic identity and are an indelible part of Georgian culture. 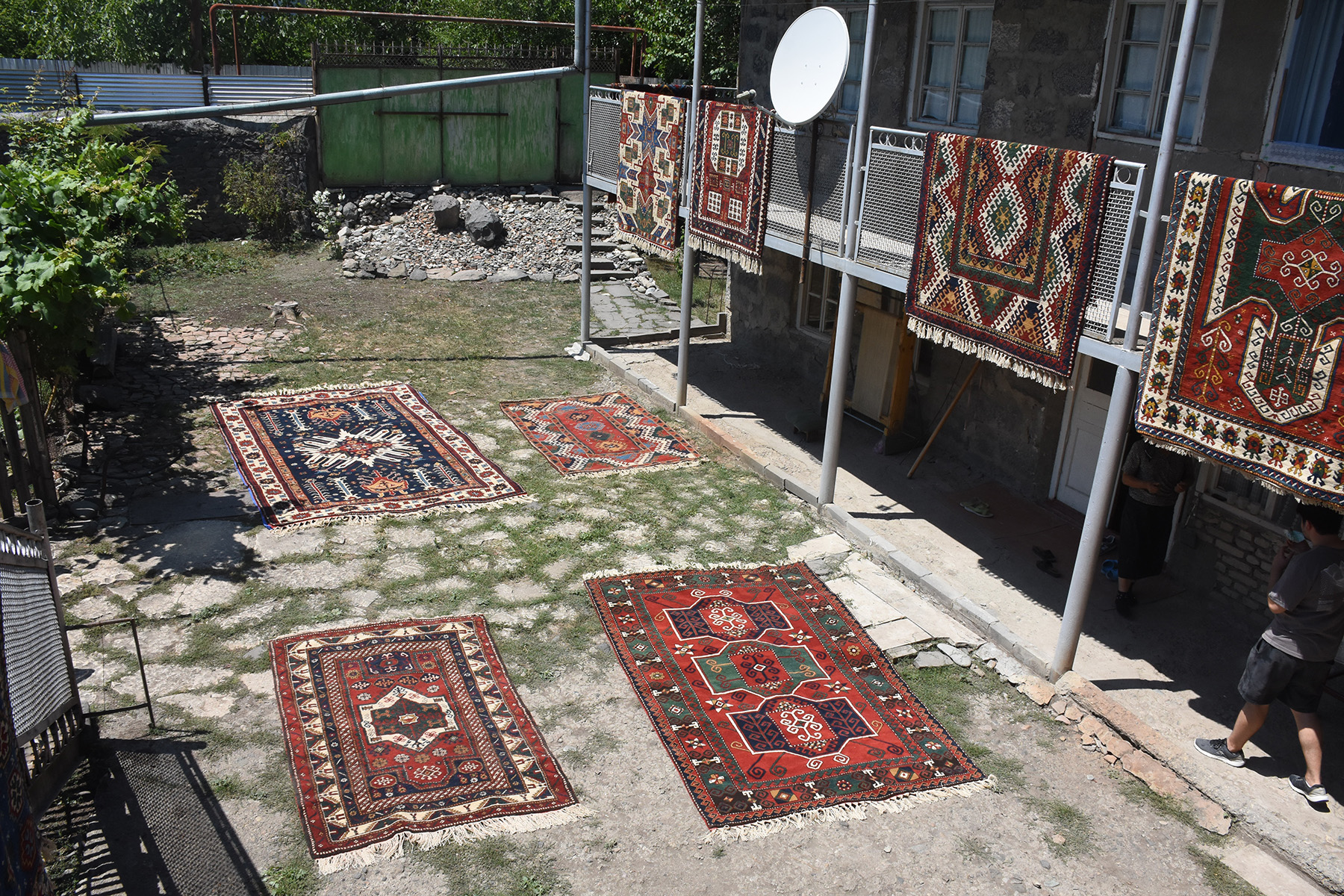 Each rug is dedicated to one idea, such as strengthening the family. Designs are also woven around the central medallion of the carpet. Photo: Tata Shoshiashvili/OC Media.

He also explained that the implementation of projects for the preservation of Borchalo carpet making would become much easier if the carpets were officially recognised as part of Georgia’s cultural heritage.

‘We want Borchalo carpets to be displayed in the museums of Bolnisi, Dmanisi, Tetritskaro, and other towns’, he said.

Unable to return home, residents of Nagorno-Karabakh caught on the Armenian side of the Lachin blockade have temporarily settled near the border.