With all of the votes counted, Nikol Pashinyan’s Civil Contract Party received 54% of the vote, according to preliminary results. Its main contender, the Robert Kocharyan-led Armenia Alliance, ended up in a distant second with roughly 21% of the vote.

According to OC Media’s projections, Pashinyan’s Party will maintain its two-thirds majority in the Armenian parliament with 71 out of 105 seats. The Armenia Alliance will receive 27 seats, and the I Have Honour coalition — despite not passing the 7% threshold for electoral coalitions —  will receive 7 seats, as a minimum of three parties or blocs must enter parliament.

‘The most serious reason for the lack of trust is the hundreds of warnings coming from different polling stations on the day of the election, which testify to the systematic, pre-planned falsification of the election results.’

This has not been corroborated by election observers or local election officials so far — with one independent observer noting that of the violations that did take place, the majority were carried out by the Armenia Alliance. Election observers from the Organization for Security and Co-operation in Europe (OSCE) are scheduled to deliver their assessment of the election later today.

Nikol Pashinyan hailed the results of the election in the early hours of 21 June. Speaking to supporters outside of the main Civil Contract office in Yerevan he acclaimed a ‘second’ revolution of ‘steel’.

‘The dictatorship of the law is the next mandate that the people have given us’, he said. ‘We cannot wait to use that mandate.’

He has also called for his supporters to join him at a rally in Yerevan at 20:00 on 21 June.

Despite predictions that Kocharyan would win some of Armenia’s border communities and perhaps even Yerevan, Pashinyan handily carried the vote throughout the country. 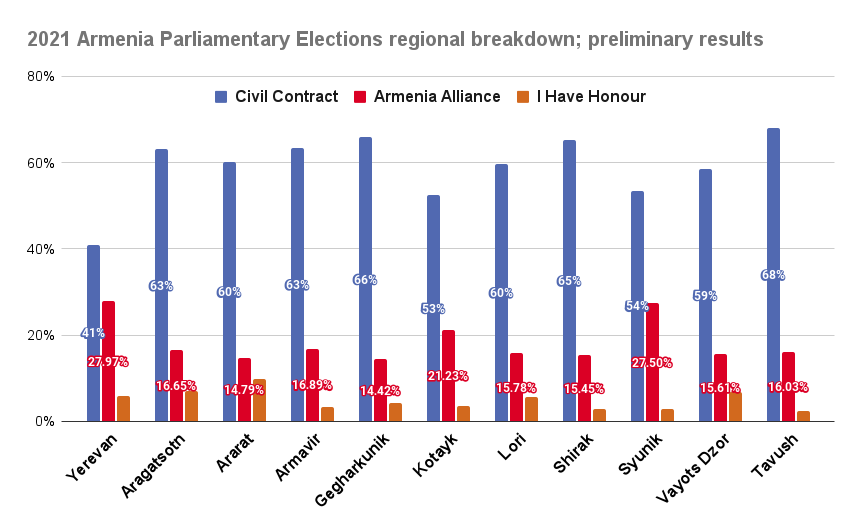 Despite the ongoing border crisis with Azerbaijan, Pashinyan won a majority of votes in Armenia’s southernmost Syunik region, winning 53.5% against Kocharyan’s 27.5%.  He even won in the border village of Shurnukh, which lost a portion of territory and nearly a dozen houses to Azerbaijan after the war.

Pashinyan also won in Geghamavan, the home village of Ishkhan Saghatelyan, the head of the Armenian Revolutionary Federation (ARF) and a member of the Armenia Alliance coalition.