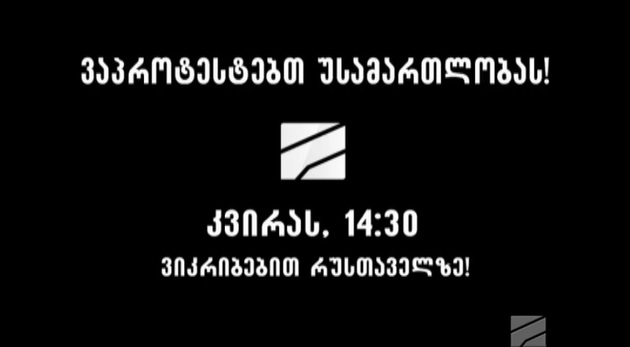 On 19 February, thousands of people gathered in front of the parliament building in Tbilisi to demonstrate their support for opposition TV station Rustavi 2.

On 18 February, Rustavi 2 halted their usual broadcasting in protest, instead displaying a message calling on people to join the rally.

Deputy director of Rustavi 2, Zaal Udumashvili, spoke at the rally. ‘Today, we have to tell the government that this country will never agree to the curbing of freedom of speech’, Udumashvili said.

Udumashvili told OC Media that the government was trying to take over Rustavi 2 using all possible institutions.

‘Today the issue of Rustavi 2’s  existence is in question. We will manage to save the TV station only if we consolidate our efforts in defending free speech in our country’, Udumashvili said.

The rally was attended by both parliamentary and non-parliamentary opposition parties, students, journalists, and nongovernmental organisations. Their main slogan was ‘defending the freedom of speech’.

One of the organisers of the rally and member of the opposition United National Movement party, Nika Melia, told OC Media that the rally should be a signal to the government that people weren’t going to give Rustavi 2 up.

‘The government is acting directly against the free media, which has made the public loudly voice their complaint. This is a warning’, Melia said.

The rally was also attended by journalist and editor of online media outlet Kronika+, Eliso Kaladze, who said that attending the rally wasn’t only to show support for Rustavi 2, but also to the judges who have found themselves under pressure from the government.

‘I hope that the Supreme Court will free itself from the severe psychological and moral pressure, which the State Security Service has exercised on them using their own media outlets. The judges need to know that society supports them’, Kiladze said.

A group of students also joined the rally. One student from the Georgian Technical University, Levan Laghidze, told OC Media that there was a struggle going on between two visions for Georgia’s future — the European choice and the Russian choice — and the transfer of the only opposition TV station into the hands of the government could impede the country’s democratic transition.

‘Today, I am here to defend freedom of speech. I have chosen Europe because this is the difference between freedom and Russian imperialism. I will protect this TV station even if I have to stay multiple nights at the rally’, Laghidze said.

Last September, the general director of Rustavi 2, Nika Gvaramia, said that the Supreme Court judges were being pressured, although the chairman of the Supreme Court, Nino Gvenetadze denied this.

Businessman Kibar Khalvashi, who owned the TV station in 2004–2006, took Rustavi 2 to court in 2015 to demand shares in the station. Various opposition parties interpreted this as a scheme aimed at taking control of the TV station.

Khalvashi’s lawyer, Paata Salaia, said during a press conference that his client gave up his shares in 2006 as a result of direct pressure from then president Mikheil Saakashvili, and he was planning to win his shares back.

‘Attacks were carried out against businesses, and Kibar Khalvashi’s shares were violently seized from him. Under suspicious circumstances his warehouse, where he kept property worth several million dollars, was burnt down’, Salaia said.

Following an appeal, the court allocated a controlling share of Rustavi 2 to Khalvashi. The TV station appealed the decision, but the Court of Appeal upheld it.

The current owners of Rustavi 2 filed a lawsuit at the Supreme Court, which has yet to  announce its decision.

In their 2016 report, Human Rights Watch criticised the authorities for interfering in the Rustavi 2 case.

‘Media pluralism was threatened by (…) a dispute involving past and present high-level officials’ alleged interference in the ownership and management of the most-watched television station, Rustavi 2’, the report reads.