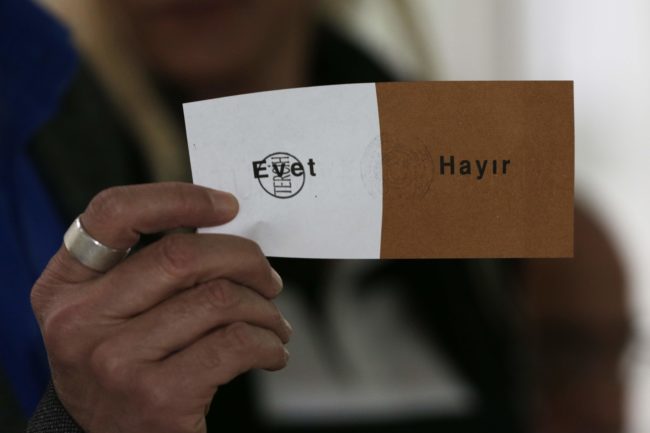 On 16 April, 51.34% of Turkish voters decided to approve proposed amendments to the Turkish constitution, effectively abolishing the office of prime minister and replacing the parliamentary system of government with a presidential one.

Turkish citizens could vote in polling stations in Tbilisi and Batumi in Georgia, where 59.3% voted against the amendments. In Azerbaijan, 61.7% of Turkish voters said no to the proposed changes.

There was an instant reaction from politicians and analysts in Armenia, Azerbaijan, and Georgia regarding the future of the three countries’ relations with Turkey.

The governments of Azerbaijan and Georgia congratulated Turkey on the referendum results. Georgian Prime Minister Giorgi Kvirikashvili remarked that Turkey’s ‘stable development’ was important to Georgia.

We respect & welcome the choice of Turkish people. #Turkey is a strategic partner & its stable development is important to Georgia & region.

‘The heads of state expressed their confidence that friendly and brotherly relations between Azerbaijan and Turkey will continue to successfully develop in all areas’, a statement on Aliyev’s official website reads.

Deputy Chair of the National Assembly of Azerbaijan, Bahar Muradova said that the referendum was held to high standards and its goal was achieved.

‘Recently, we have seen intense debate between citizens of Turkey. We can see the result. The goal has been achieved. The referendum was held to a high standard and in accordance with all democratic standards’, Bakharova said.

Georgian political scientist Kakha Gogolashvili said that Turkey was rejecting the democratic model of governance, which was an alarming development for Georgia. He compared Turkey to Russia, as an authoritarian country.

‘A relation with an authoritarian state is always risky, as it can always bring its authoritarianism to foreign relations and try to get involved in internal and external political issues of Georgia’, Gogolashvili said.

Aleksandr Iskandaryan, director of the a Yerevan-based Caucasus Institute think tank, criticised the result of the referendum, saying that the most developed and educated sector of Turkish society was against the amendments, while the more rural, traditional part of the population voted for it.

Armenian Turkologist Levon Hovsepyan said that the Turkish constitutional changes would have a negative effect on Armenia.

‘It is much better for Armenia, as a neighbouring country, to see Turkey as a predictable and democratic country’, Hovsepyan said.