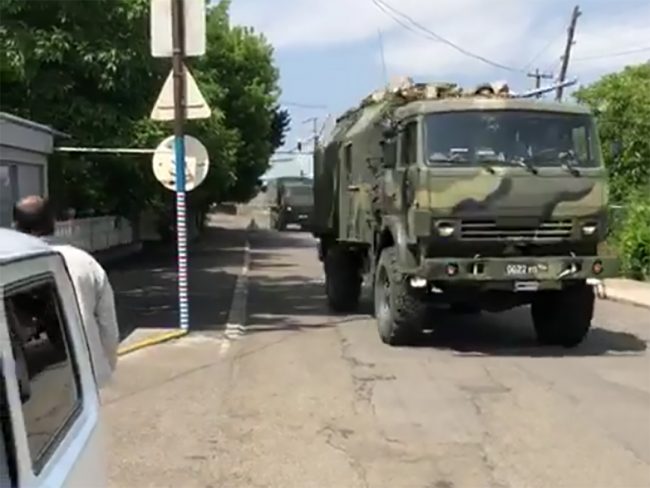 A surprise Russian military drill in the Armenian village of Panik caused panic on Tuesday, local residents report. The 102 Russian military base, located in the nearby city of Gyumri, apologised to the authorities of Shirak Province for the surprise drill.

In videos uploaded to Facebook, Gunfire and explosions can be heard as heavy military vehicles drive through the village. Several local residents were seen to block the road in which the military column had been driving through and angrily confront the Russian soldiers.

Panik’s mayor, Vardan Makeyan, told Sputnik Armenia that the Russian military were shooting blanks, but that the local population had no chance of knowing this. ‘We appreciate the protection, but they should not come and start military operations on the village territory’, said Makeyan.

According to Aravot, the Russian units left only after Makeyan contacted the Armenian National Security Service and police.

Karen Sarukhanyan, the governor of Shirak Province, met the deputy commander of the base Aleskey Palyukhovich the following day to discuss the incident. Sarukhanyan said that Palyukhovich acknowledged the base’s ‘failure’ to inform the local community.

The Russian military command issued an apology for the incident and promised to identify and hold accountable those guilty for ‘negligence’  after an internal investigation is conducted, and to ensure no similar incident happened in the future.

Later on Tuesday, Arman Egoyan, the press-secretary of Armenian Prime Minister Nikol Pashinyan,  told the media the PM had been informed of the incident and the situation was under his personal control.

The Russian military in Gyumri

The Alagyaz polygon, situated near Panik, is frequently used for Russian military drills, according to Lenta. The 102nd military base in Gyumri was established in the mid-1990s and was followed by a 1997 treaty signed by Armenian President Levon Ter-Petrosyan and Russian President Boris Yeltsin guaranteeing Russian military assistance to Armenia if it is attacked.

The Russian military presence in Gyumri caused controversy in early 2015 after 19-year-old Russian soldier Valery Permyakov deserted his post and massacred a local Armenian family. Permyakov shot to death six members the Avetisyan family, including a girl of 2, and stabbed a six-month-old baby who later died.

Russian officials initially refused to hand over Permyakov to face trial in an Armenian court, which sparked protests in Gyumri and Yerevan. Following the protests, Permyakov was handed over to Armenia authorities and sentenced to life in prison before eventually being handed back to Russia in 2017 to serve his sentence.

2. 15 Armenian captives freed in deal negotiated with help of US, Georgia, and OSCE

15 Armenian captives freed in deal negotiated with help of US, Georgia, and OSCE