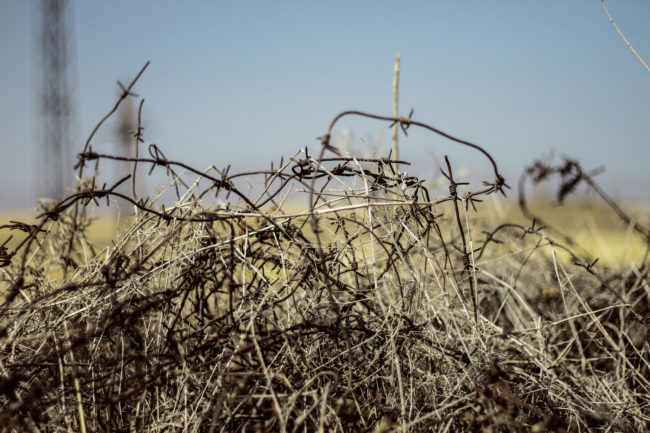 Holes dot the tarmac, there are so many that the passageway hardly looks like a road - yet that four-kilometre strip from the Gyumri Armavir highway is a lifeline for the 500-odd residents of Haykadzor, a settlement sitting right on the border dividing Turkey and Armenia.

Once a buzzing border village, Haykadzor has steadily lost its residents and, as access to water is increasingly difficult, those who remain are thirsty, just like the land surrounding them. The village cheers up once every three days, during the so-called ‘water days,’ when they have to store enough water for the 'dry days.’ The water from the nearby reservoir is supplied through an electricity-powered network that is too expensive for the villagers - as they cannot afford the cost of the system for the daily delivery, the tap is open just twice a week.

The old people who gather near the only shop to play backgammon still recall the days when they could swim in the Akhuryan, the river flowing along the border with Turkey,forming part of the geographical frontier between the two countries. All that was before the 1950s. When Turkey joined Nato in 1952, the river ended up beyond the barbed wire and, as the Cold War got increasingly chilling, Haykadzor became a sensitive spot. A buffer zone was created and part of the village was moved. The situation seemed to be about to improve at the fall of the Soviet Union, but then in 1993 Ankara sealed the border with Armenia in light of the conflict with Azerbaijan over the breakaway region of Nagorno Karabakh. The buffer zone remained and to date villagers who want to visit their land in the area need special permission from the border guards to cultivate their plots. Lacking an irrigation system, the soil gets water only when it rains, so the harvest depends on “God’s will.”

A few meters to the other side of the line is also the village’s only church, built in the VIII century, named the Saint Gregory The Enlightener, which they can visit three times a year.

As water is limited, so is the connection to the world. The last train to call in the  station was in 1991 and, about three years later the Bagravan station, about nine kilometres away, was closed - leaving the village in isolation. Today a 13-seat minibus is the only means of public transport, the inhabitants share it with four neighboring villages. It has steadily lost its residents, leaving behind mainly the elderly who see no reason to depart. Like Yeranos Gasparyan, 60, the only person remaining, along with his sister and wife, he is the last of what once was a large family. 10-year-old Vardan is one of the 37 pupils attending the only school - a top math student - he has seen Yerevan only once from afar, when he went to the airport to meet his uncle returning from Russia.

Killer of Davit Saralidze sentenced to 15 years for murder