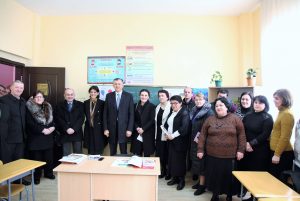 Abkhaz-language lessons have been introduced to the Peria village school and School #14 in Batumi, in the Autonomous Republic of Adjara. Each grade will be given the opportunity to receive four hours of instruction in Abkhaz a week.

Georgian Minister for Reconciliation and Civic Equality Ketevan Tsikhelashvili, together with the head of the Government of Adjara, Zurab Pataradze, attended a ceremony introducing the Abkhaz language classes to the two schools.

The opening ceremony in Peria included a play prepared by schoolchildren in both Georgian and Abkhaz entitled We will return, as well as a literary exhibition about amhajyrra — the mass migration of ethnic Abkhaz people from Abkhazia in the late 19th century, during the Russian conquest of the Caucasus.

‘I am happy that we managed to fulfill our promise — today we’re opening Abkhaz language classes and many are already willing to take them. (…) It’s our responsibility to protect the Abkhaz language, culture, and identity. Abkhaz is a state language together with Georgian, and in the future we will take even more steps in this direction’, Tsikhelashvili said during the ceremony.

According to the 2014 Georgian census, there are 113 people in Adjara who claim Abkhaz as their mother tongue. In total, there are 272 Abkhaz speakers and 4,551 people who identify as ethnic Abkhaz in Georgia. The census didn’t include the territories of Abkhazia and South Ossetia.

French parliament calls for government to consider sanctions against Azerbaijan