The Georgian media landscape is often described as pluralistic but ‘extremely polarised’. But does the media merely reflect the prevailing political polarisation or cause it?

The majority of sizeable TV channels in Georgia are politically biased. At the same time, for seven in ten Georgians, TV remains the main source of information.

While this is a classic chicken and egg problem, arguably, causation flows both ways. Nonetheless, it has been documented that partisan media can polarise consumers and radicalise partisan voters.

While it is not possible to untangle cause and effect through the available data, it is possible to describe the differences between viewers who trust different stations. Data from Caucasus Barometer 2020 suggests that party preferences go hand in hand with media preferences.

Moreover, after controlling for social and demographic factors, TV trust seems to be strongly associated with views on some current domestic political issues, but less so when it comes to foreign policy positions.

Overall, 66% of the adult population of Georgia named a TV channel that they trusted for news and politics in Georgia on the 2020 Caucasus Barometer survey. One in four Georgians reported that they trust pro-government station Imedi TV. In contrast, 14% named Mtavari as the TV station they trust. Mtavari is regarded as the station most critical of the government and pro-opposition.

Public trust in different channels reflects party lines to a great extent. A majority (57%) of Georgian Dream supporters said they trusted Imedi, while only 8% of the opposition-minded electorate and 15% of nonpartisans said they trusted the channel.

Similarly, 47% of opposition supporters said they trusted either Mtavari or TV Pirveli, while only 5% of Georgian Dream supporters and 20% of nonpartisans trust either of those stations.

A regression analysis suggests that, after controlling for other factors, people who trust Imedi were 10 times more likely to support the Georgian Dream party compared to people that trust Mtavari or TV Pirveli.

Views on the direction the country is headed, views of whether people should protest, and views of the country’s handling of the pandemic were also associated with which TV station they watch.

A regression analysis suggested that people who trust Imedi were sharply different from other groups in their assessments of the country’s direction. People who reported trust towards Imedi were 59 percentage points more likely to say that Georgia is moving in the right direction compared to people that trust Mtavari. 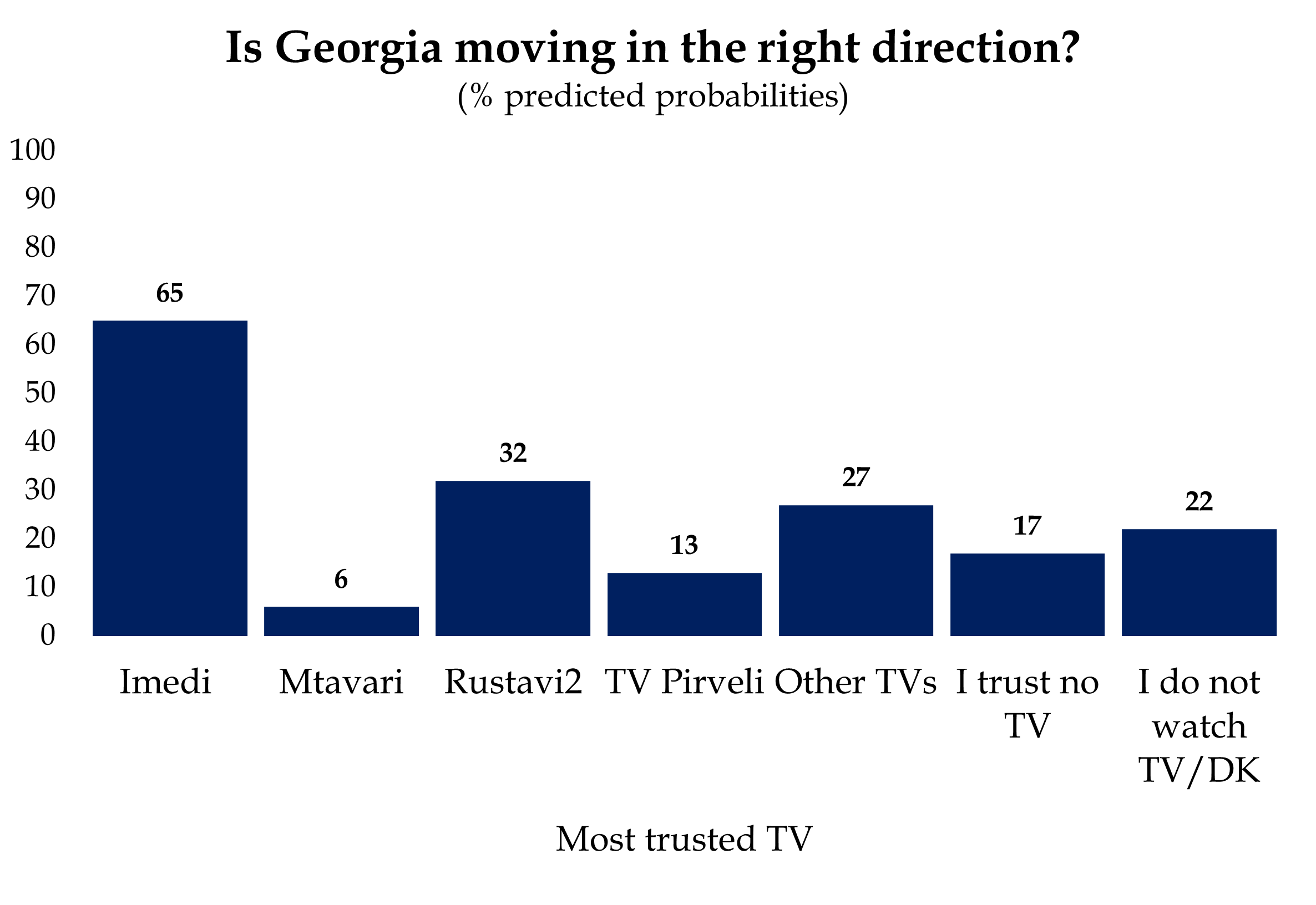 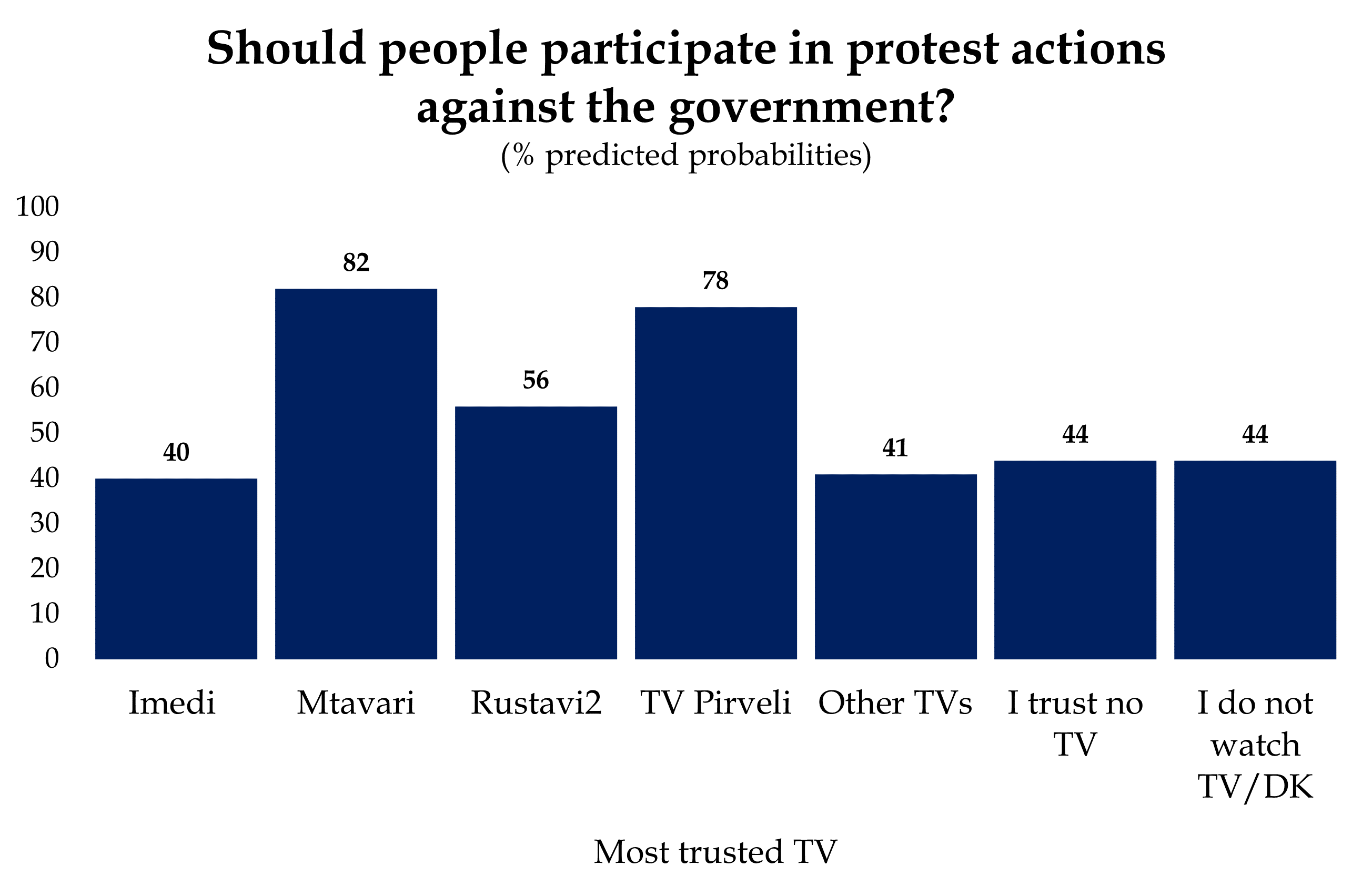 People who said they trusted the opposition-leaning Mtavari and TV Pirveli were less prone to praise Georgia’s handling of the pandemic than people who trusted other TV channels, people who did not trust any channel, or those who did not watch TV at all. 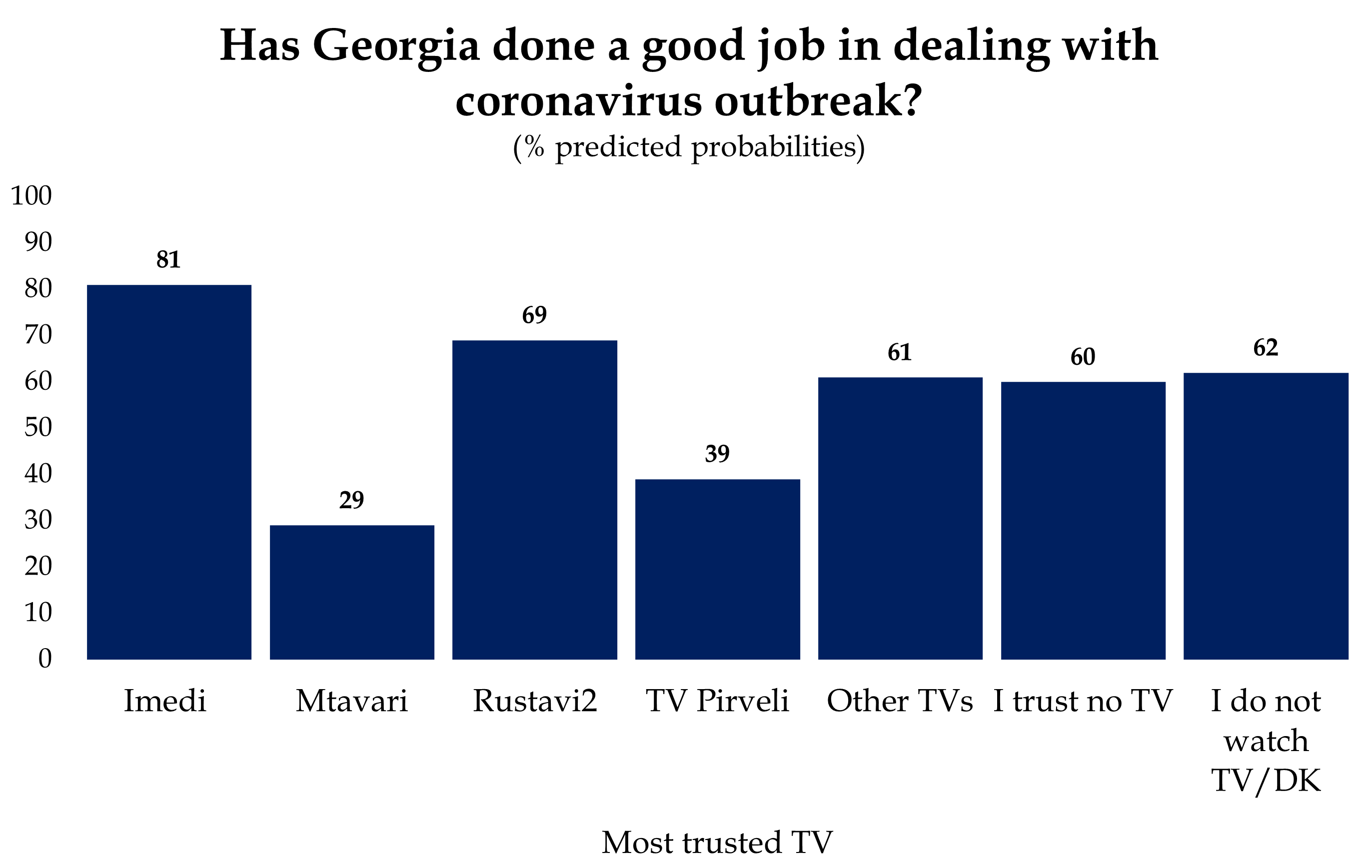 While there are some differences between the audiences of different channels, media consumption was not correlated with many factors.

For instance, there was no difference between TV audiences in terms of whether or not they believed that areas of neighbouring countries where artefacts of the Georgian culture are located should be included in the borders of Georgia. The public largely reports that such territories should be part of Georgia.

The question has implications for the Davit Gareja case, which attracted significant public attention during the pre-election and post-election period. The issue has been politically instrumentalised with pro-government channel Imedi adopting the slogan ‘Davit Gareja is Georgia’.

Still, the formulation of the question in the Caucasus Barometer 2020 dataset is in general terms and therefore proxies attitudes rather than providing direct evidence of what the public thinks regarding the Davit Gareja case. 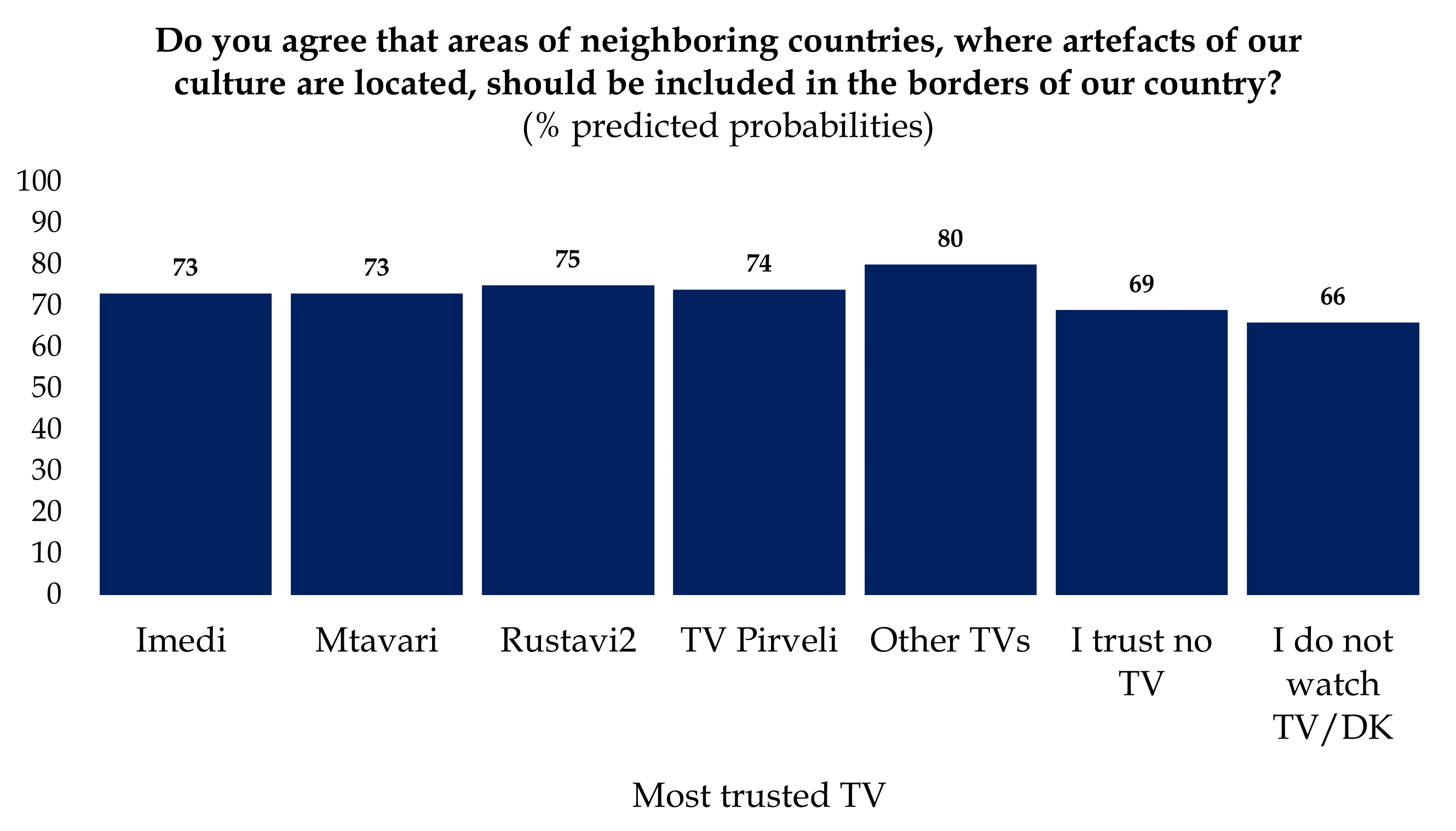 As with the question on territory, there are limited differences between groups on foreign policy priorities. Even though a regression analysis suggests there are some statistically significant associations, these differences do not carry huge substantive importance as all the groups, ultimately, tend to support Georgia’s membership in the EU as well as NATO. 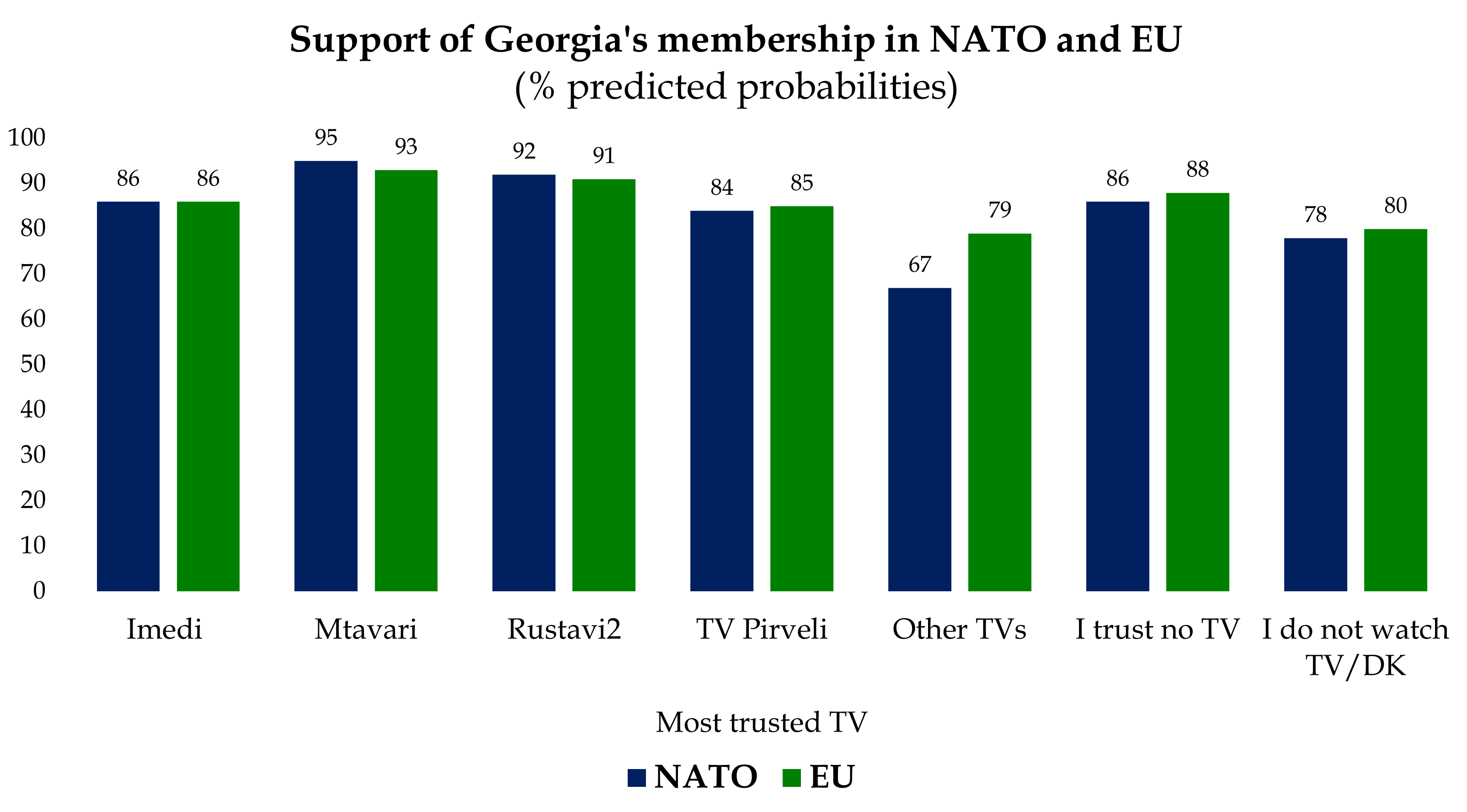 Another regression model was constructed to test associations between TV trust and support for Georgia’s membership in the Russian-led Eurasian Union. Some groups tended to sympathise more with Georgia becoming a member of the Eurasian Union than others, however, overall, the public disapproves of Georgia joining the Russian-led project. 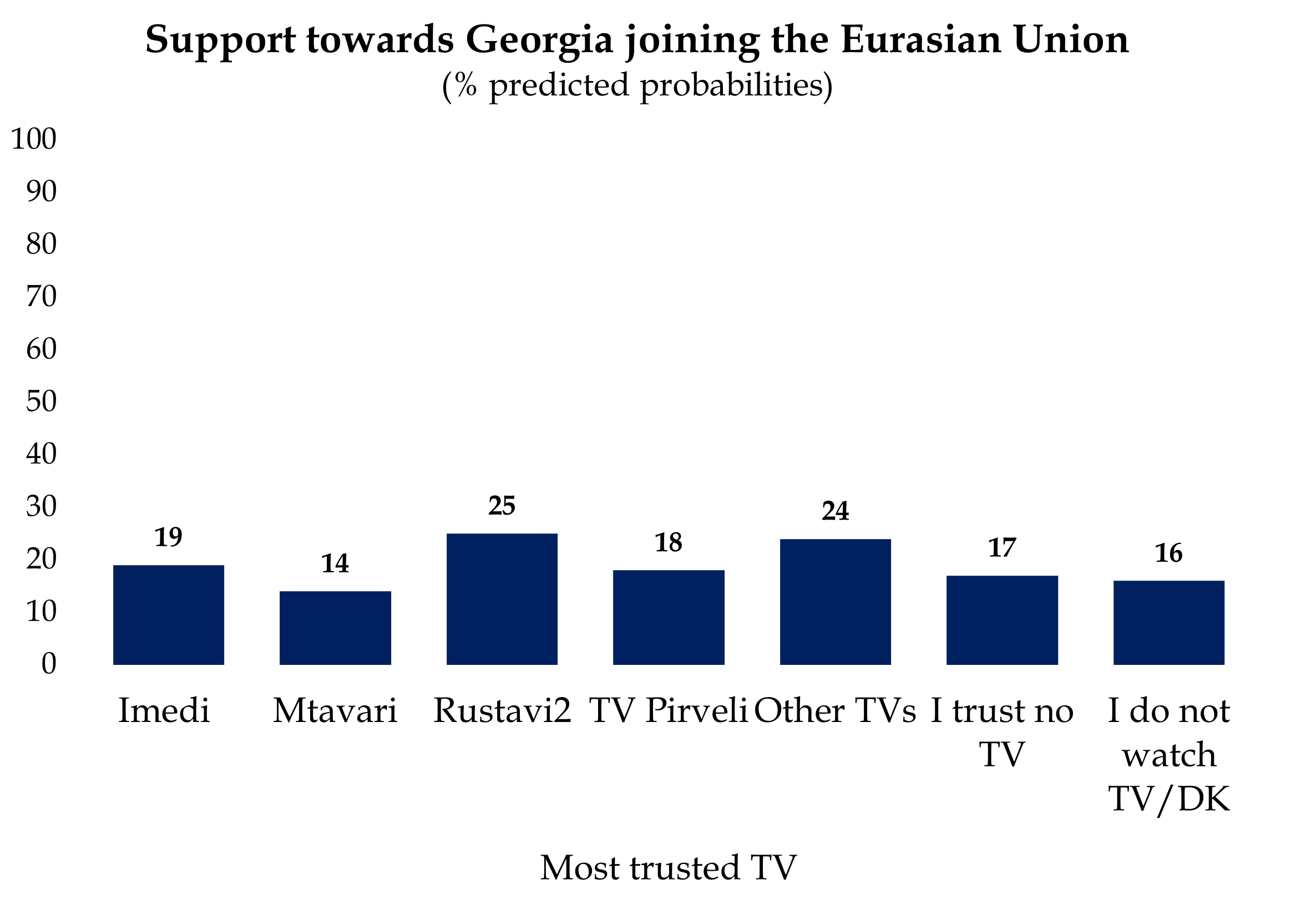 All else equal, the TV media environment seems to be at the core of the country’s polarised political discourse.

TV is strongly associated with party preferences and assessments of many current domestic issues and developments, but less so with a foreign policy orientation.

To what extent TV channels in Georgia persuade voters or make them more extreme, remains an open question.  However, what the above analyses suggest is that the socio-political landscape in Georgia is being increasingly divided into two camps. This divide revolves around contrasting perceptions of reality, and TV seems to be exacerbating rather than bridging the chasm.

Note: The above data analysis is based on logistic and multinomial regression models which included the following variables: age group (18-35, 35-55, 55+), sex (male or female), education (completed secondary/lower or incomplete higher education/higher), settlement type (capital, urban, rural), wealth (an additive index of ownership of 12 different items, a proxy variable), employment situation (working or not), IDP status (forced to move due to conflicts since 1989 or not), frequency of internet usage (every day or less often), and frequency of attendance at religious services (regularly/on special religious holidays/less often).