While polling suggests that 26% of Georgia’s population had not heard of the war in Nagorno-Karabakh last autumn, for those who had, opinions were difficult to gage. So how did Georgians view the roles of the belligerents, outside actors, and indeed their own country?

In December 2020, shortly after the end of military operations in Nagorno-Karabakh, 74% of Georgians reported they had heard of the conflict that had raged there only a month prior. Among those that were aware of the conflict, the data indicate that assessing the parties directly or indirectly involved in the conflict was quite difficult.

While Georgia’s role is assessed most positively, the roles Russia and Armenia played in the conflict seem to be viewed most negatively. In this regard, the data might reflect Georgian society’s views of its own unresolved conflicts.

Besides the belligerents to the conflict, a number of states and multilateral organisations were involved in the conflict and its resolution, including Turkey, Russia, France, the US, and the EU, among others.

During the war, both Azerbaijani and Armenian forces were reported to have violated international humanitarian laws and the laws of war, resulting in civilian casualties and abuses of prisoners of war.

Turkey was an open and strong supporter of Azerbaijan, while Russia, France, and the United States were involved in the ceasefire negotiations. Russia has since deployed peacekeepers in the post-conflict area to oversee the ceasefire. A joint Russian-Turkish ceasefire monitoring centre based in Azerbaijan, outside of the zone of conflict, has also been opened.

Although Georgia remained officially neutral throughout the war and offered to facilitate dialogue, there was a great deal of disinformation regarding Georgia’s position in both Armenian and Azerbaijani media. Meanwhile, the EU expressed concern over the fighting and allocated millions in emergency aid for civilians affected by conflict, but did not play a significant diplomatic role.

While this is the backdrop in which Georgians were asked their views of the different parties involved in the conflict, it does not mean that respondents were aware of it when surveyed. Indeed, a large share of those that were aware of the conflict found it difficult to positively or negatively assess the roles of each group asked about, with between 41% and 69% unable to assess each of the actors they were asked about either positively or negatively.

People were particularly uncertain about how to evaluate France, the US, and the EU.

Those aware of the conflict were most positive about Georgia (44%). A regression model suggests that the assessment of Georgia’s role in the conflict does not vary significantly across different groups in society. 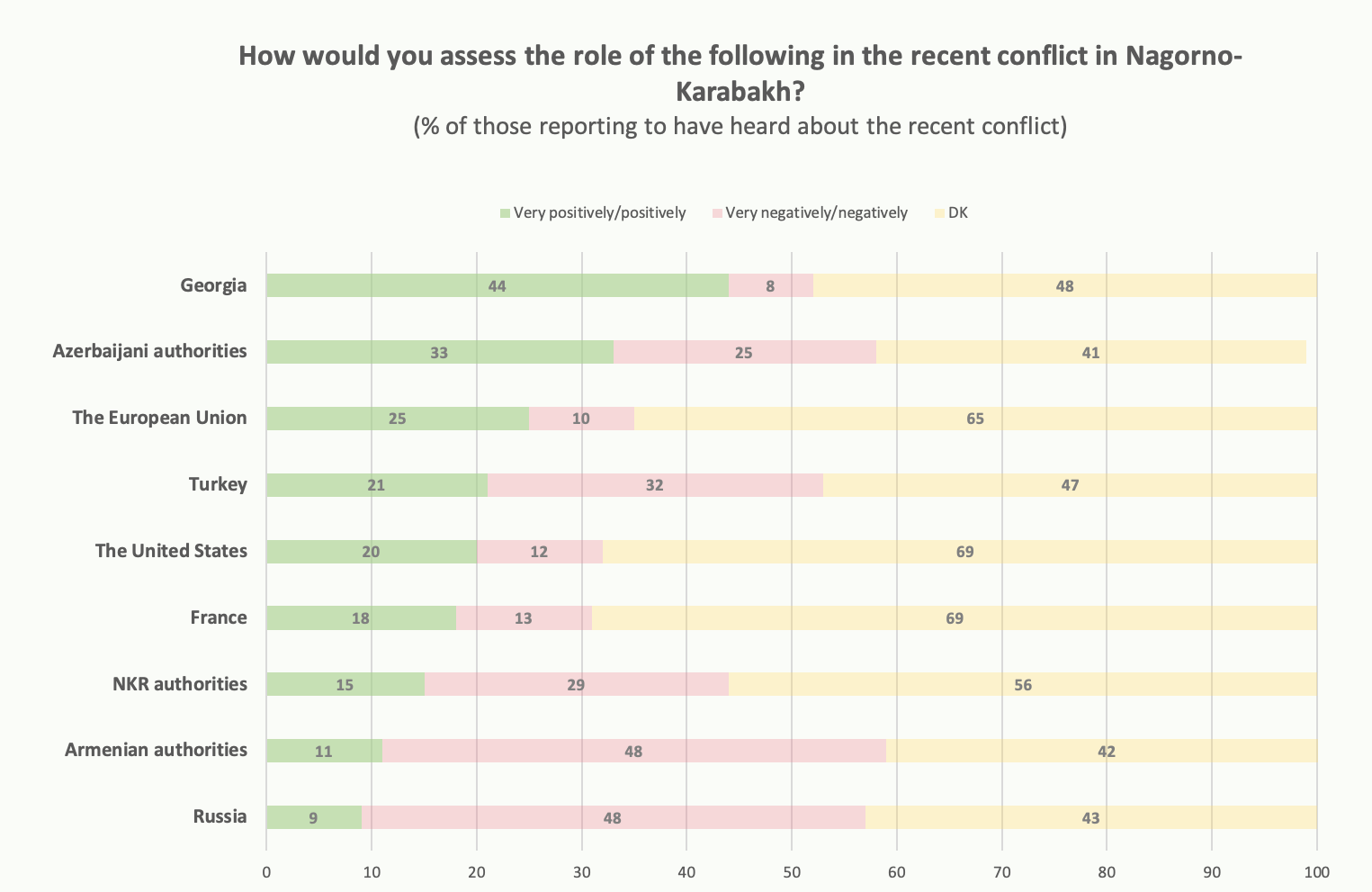 The roles of Russia and the Armenian authorities were assessed most negatively, followed by Turkey and the Nagorno-Karabakh authorities.

While no differences were found in the assessment of the Armenian authorities across different groups in society, the assessment of Russia was associated with respondents’ ethnicity. Ethnic Georgians were 25 percentage points less likely to assess Russia’s role positively compared to ethnic minorities, including both ethnic Armenians and Azerbaijanis.

Although the reasons behind people’s views of the parties to the conflict require further research, more positive assessments of Azerbaijan might be linked to the territorial integrity issues that Georgia itself faces.

Back in 2013, when asked about a possible solution to the conflict in Nagorno-Karabakh, slightly less than half of Georgians who reported they had heard about the conflict either could not answer the questions about the future status of the territory or refused to answer the questions. Of those who did answer, more were in favour of having it as a formal part of Azerbaijan rather than of Armenia.

The data shows that although the assessment of parties involved in the recent conflict in Nagorno-Karabakh varies, an important share of the public is unable to make any assessment.

The data used in the article can be found on CRRC’s online data analysis tool.

The analysis of whether the roles of Armenia, Azerbaijan, Russia and Georgia were assessed positively or negatively was carried out using logistic regression. The regression included the following variables: sex (male or female), age group (18–35, 35–55, 55+), ethnic group (ethnic Georgian or other ethnicity: Armenian, Azerbaijani, or other), settlement type (capital, other urban, rural), educational attainment (secondary or lower education, or higher than secondary education), employment situation (working or not), IDP status (forced to move due to conflicts since 1989 or not), frequency of internet use (every day, less often, never), trust in media (distrust, neither trust nor distrust, trust).

The views expressed in the article are the author’s alone and do not reflect the views of CRRC Georgia, or any related entity.