Each government of Georgia has had a wide range of successes; but how do the public see these successes from Shevardnadze’s time to the present?

When Eduard Shevardnadze’s government is mentioned in Georgia today, it tends to be connected with the dark times Georgia experienced in the 1990s. Yet, his government also saw the introduction of the Georgian Lari, resulting in a stable exchange rate.

The United National Movement is credited with fighting petty corruption, and oversaw a period of relatively high economic growth, while at the same time failing to avoid the disastrous 2008 war with Russia.

The Georgian Dream government too is seen as having had some success, for example, in reducing the prison population, from what was among the highest in the world. At the same time, incidents like the Gavrilov Nights and issues around election integrity are often cited as failures.

While outside observers frequently point to a wide variety of successes and failures, what does the Georgian public think?

Newly released data from a CRRC Georgia survey conducted in partnership with the Levan Mikeladze Foundation and Carnegie Europe provides a picture of the public’s views of the largest successes and failures of government.

This post looks at the successes, while another post also published today (available here) looks at the failures.

Who has something nice to say about Shevardnadze?

The data says relatively few people in Georgia have something nice to say about Shevardnadze: a third of the public reported they could not name a single success of his government. The second most common response was ‘don’t know’, suggesting less approbation than the previously noted response, but still a lack of a clear success coming to mind.

The relatively high share of ‘don’t know’ responses may in part stem from a lack of memory of government during this time, particularly for younger respondents.

Among responses that were actual successes, gaining international recognition of Georgia’s independence (12%) and building the east-west energy corridor and related responses (5%) were the most commonly named options. Other responses were named by 3% or less of the public. 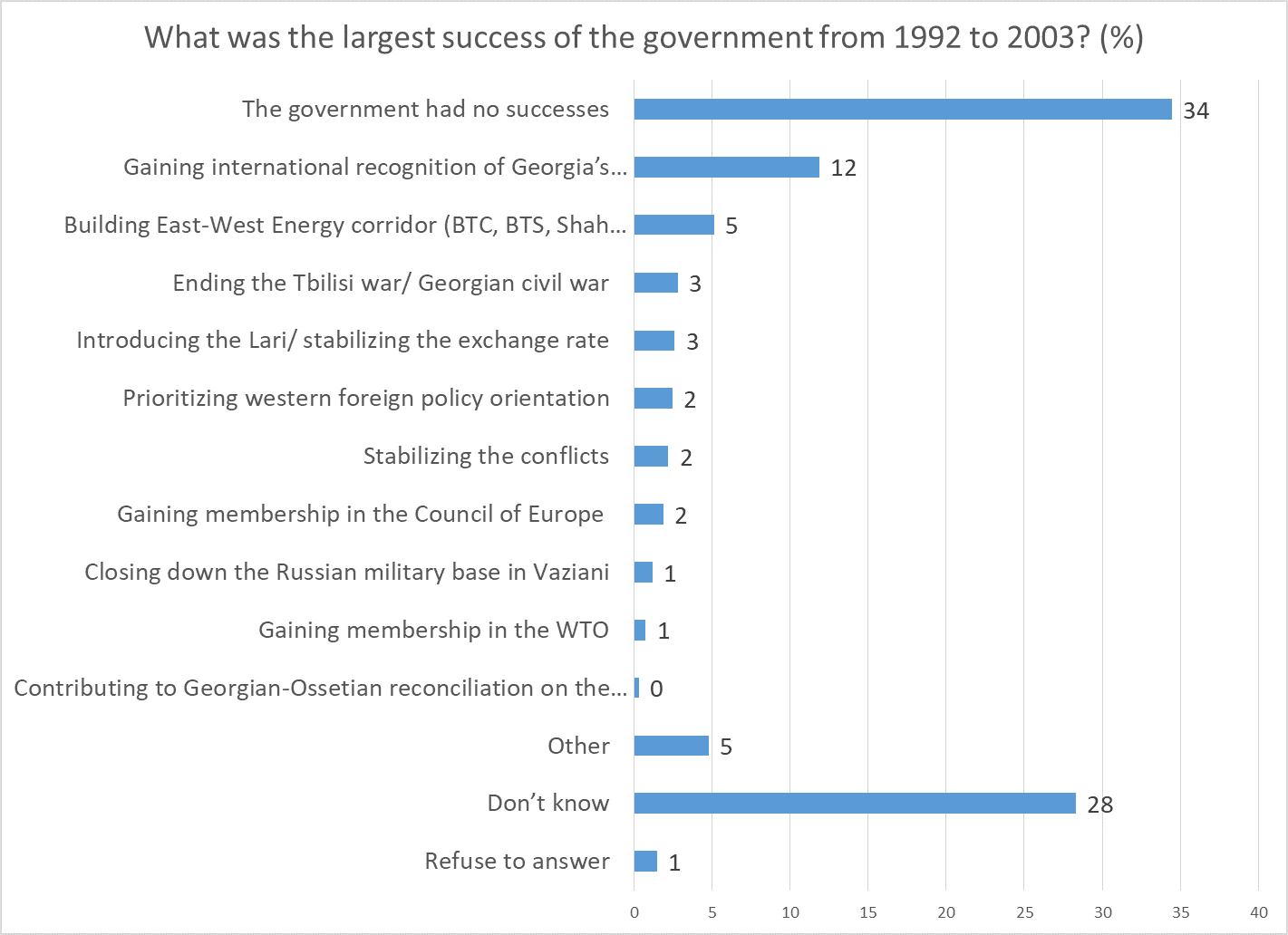 CAPTION: Note: The questions about the successes of each government in Georgia were asked as open questions, which interviewers selected a corresponding category for from a list of potential response options. If the respondent’s response did not match with any of the categories among those available, the response was coded as other and specified. These responses are quite diverse and available in the dataset, here.

The data indicates that ethnic Georgians, older people, people in Tbilisi, and working people were more likely to be able to name some success of Shevardnadze.

Supporters of different political parties were no more or less likely to name a success. However, those who responded that they did not know which party was closest to their views were less able to name a success of Shevardnadze. This may signal less awareness of politics more generally, and in this sense is unsurprising.

The data suggested there were no significant differences between wealthier and poorer households, the internally displaced and not, and people with different levels of educational achievement. 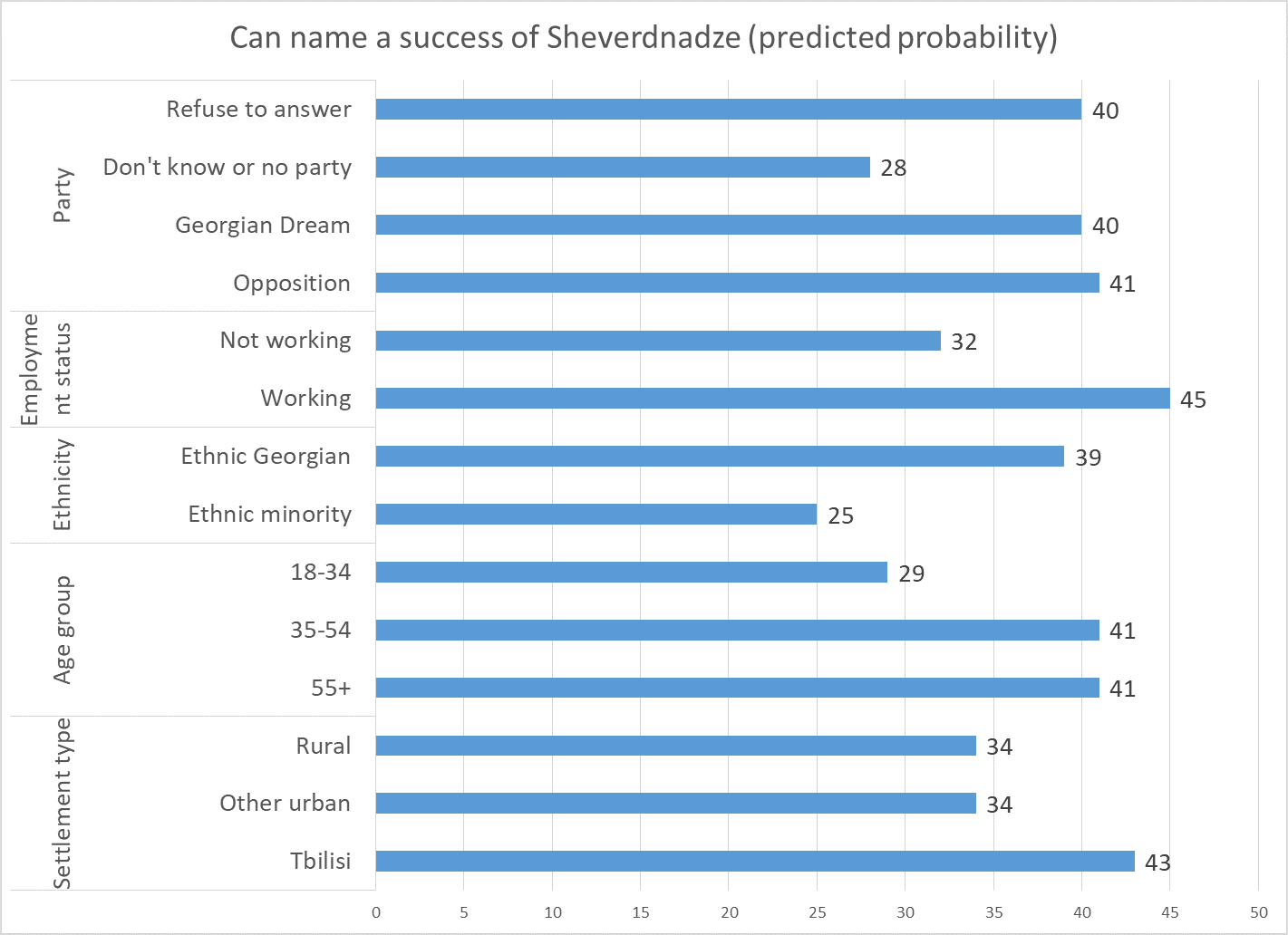 The public’s views of the UNM in power

The United National Movement Government received praise internationally for its anti-corruption measures, and the country’s economy grew at a rate of between 5%–12% annually outside of the 2008–2009 great recession. Given this, it is perhaps unsurprising that when asked what the largest successes of the government were from 2004–2012, a quarter of the public replied fighting crime/law and order (24%) and another quarter economic growth (23%).

Improved public services, elimination of petty corruption, and Georgia growing closer to the EU and NATO were each named by 5% of the public, as was that the government had no successes. 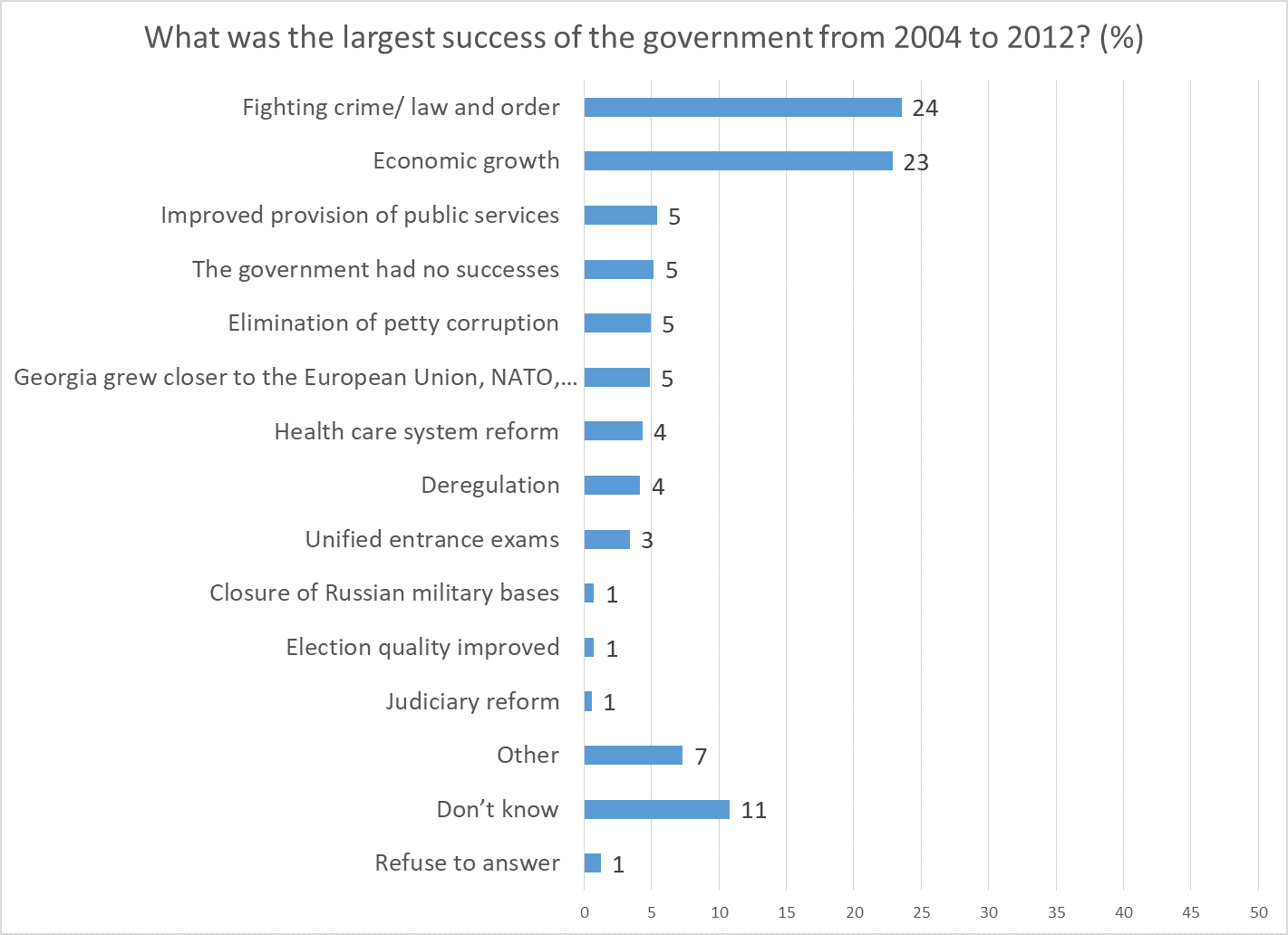 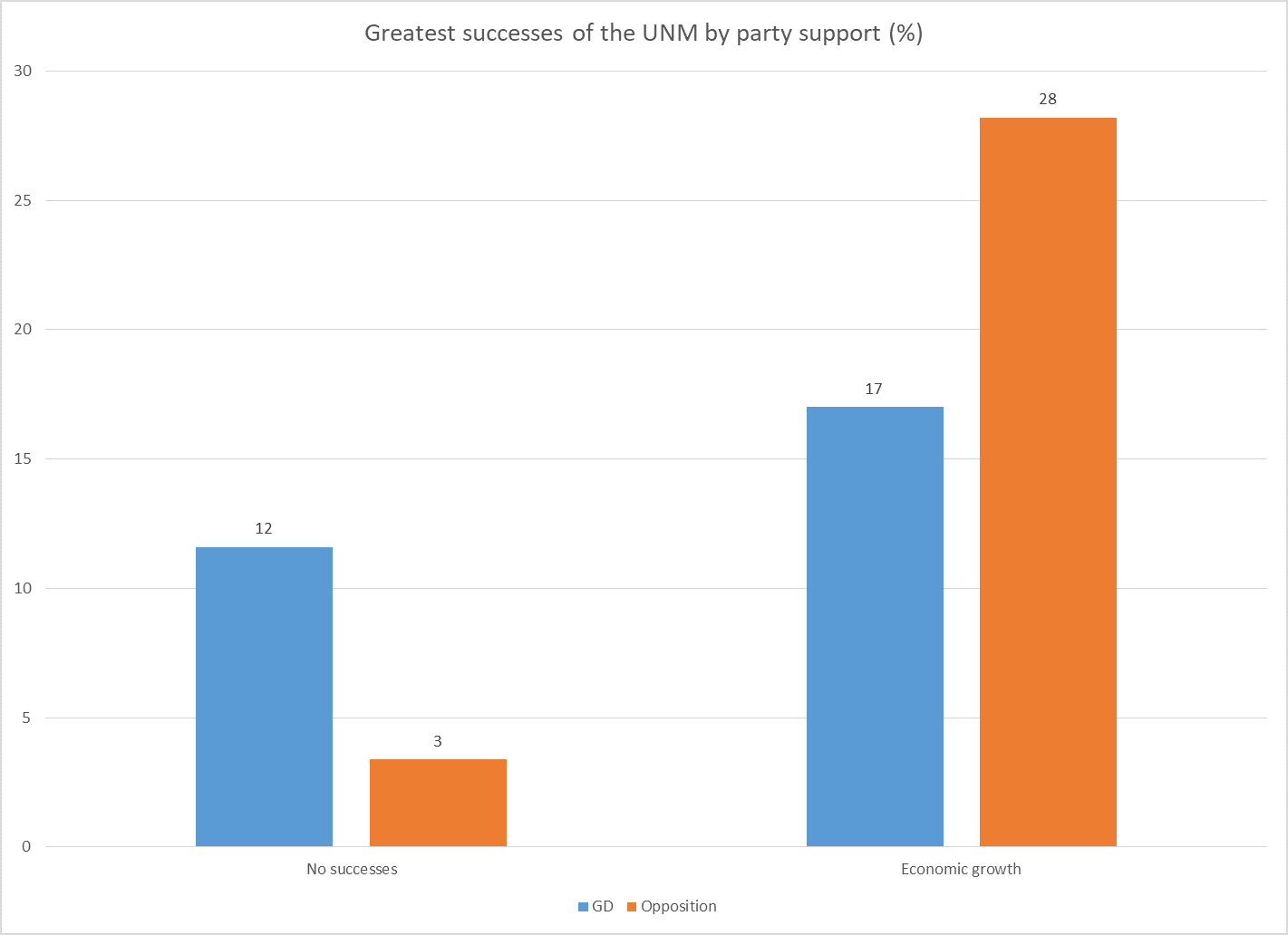 While more people could name a success of the Georgian Dream than Shevardnadze’s government, a mix of uncertainty and thinking the government had no successes was common.

Among actual successes, the public most frequently named improved human rights protections (11%), effective mitigation of the COVID-19 pandemic (9%), and introduction of the universal healthcare programme (9%).

Visa-free travel to the EU (7%) and the implementation of the Hepatitis C programme (5%) were also commonly named. 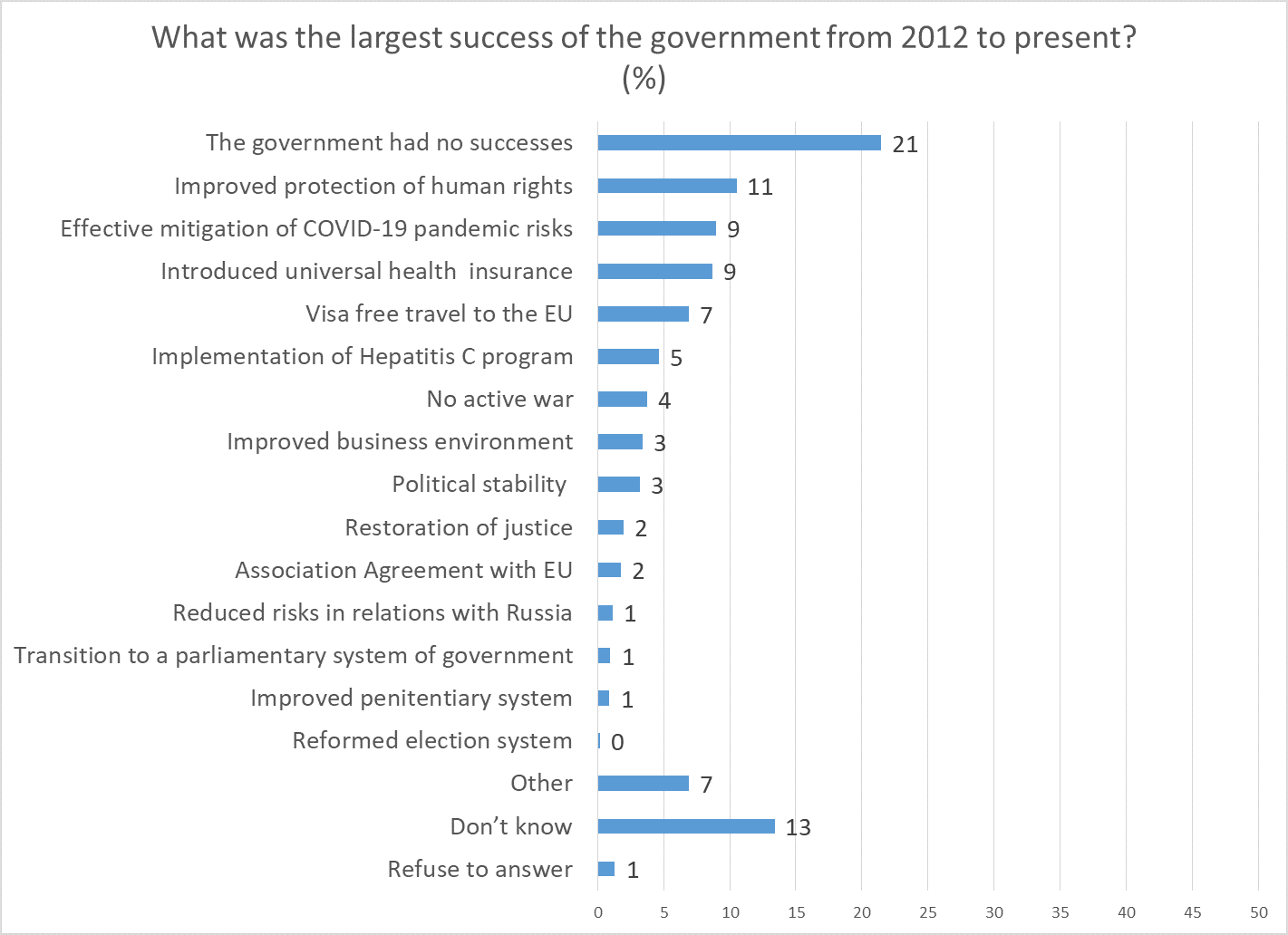 People who were not aligned with any political party were significantly more likely than Georgian Dream supporters, but less likely than opposition supporters, to say that the government has had no successes.

Among Georgian Dream supporters, the protection of human rights was named more often than among other groups. 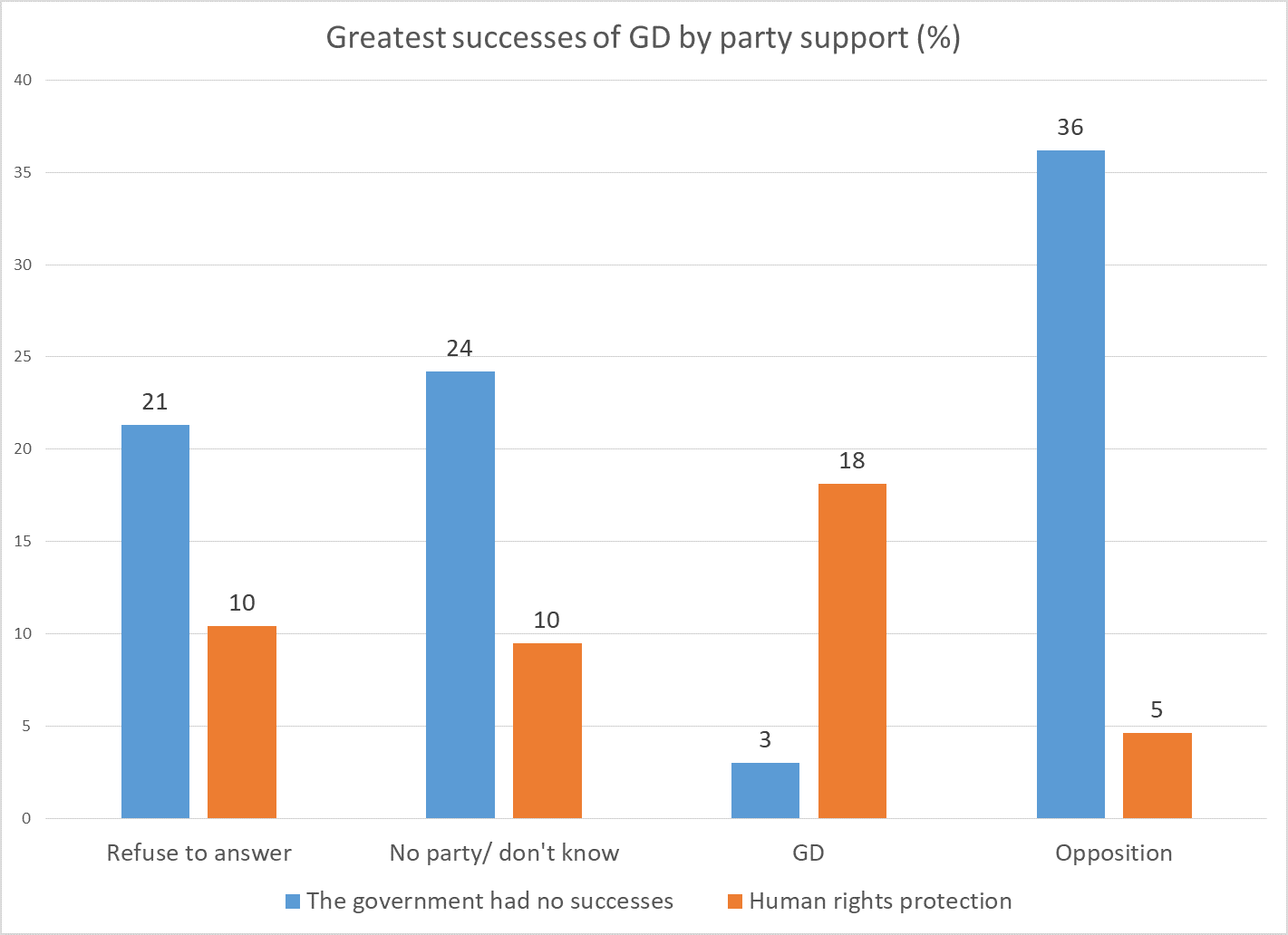 According to the Georgian public, Shevardnadze’s largest success, among those who could name one, was gaining international recognition of Georgia. Yet, three times as many people report his government had no successes.

For the UNM, the public remembers its anti-corruption efforts as well as the country’s economic growth during this period.

For Georgian Dream, people have more difficulty naming a concrete success than with the UNM, though more people can name a success for Georgian Dream than for Shevardnadze.

Views about the UNM and Georgian Dream were divided along partisan lines, with people in opposing camps less willing or able to name a success of the opposing party.

Note: The data analysis of who can name a success for Shevardnadze’s government presented in this article is based on regression models controlling for respondent age group (18-35, 36-55, 56+), employment situation (working or not), party support (Georgian Dream, Opposition party, no party/don’t know and refuse to answer), education level (secondary or less, vocational education, or tertiary education), sex (female or male), settlement type (capital, other urban, or rural), and IDP status (IDP or not). The data used in this article are available here.