While each Georgian government has had a range of successes, as described in another post published today, they have each had their own spectacular failures.

From Shevardnadze’s failure to establish state power outside Tbilisi, to the human rights abuses under the UNM and Gavrilov’s Nights under Georgian Dream, every government has had significant shortcomings.

While these are some of the most memorable, little research has been conducted on what the public thinks are the largest failings of each government. Data released on Tuesday from a CRRC Georgia survey conducted in partnership with the Levan Mikeladze Foundation and Carnegie Europe provides a picture of the public’s views of the largest successes and failures of government.

This article looks at the failures, as well as political divisions over them for supporters of the opposition and Georgian Dream.

When it comes to Shevardnadze’s failures, the most common failure named, by 21% of the public, was the country’s economic collapse. One in nine (11%) consider his government’s largest failure to be not preventing the wars in Abkhazia and South Ossetia.

Electricity shortages (9%), ineffective governance (7%), crime (6%), and the 1998 fighting in Gali (6%) were also commonly mentioned. Still, a fifth of the public (22%) were unable to think of a particular failure. 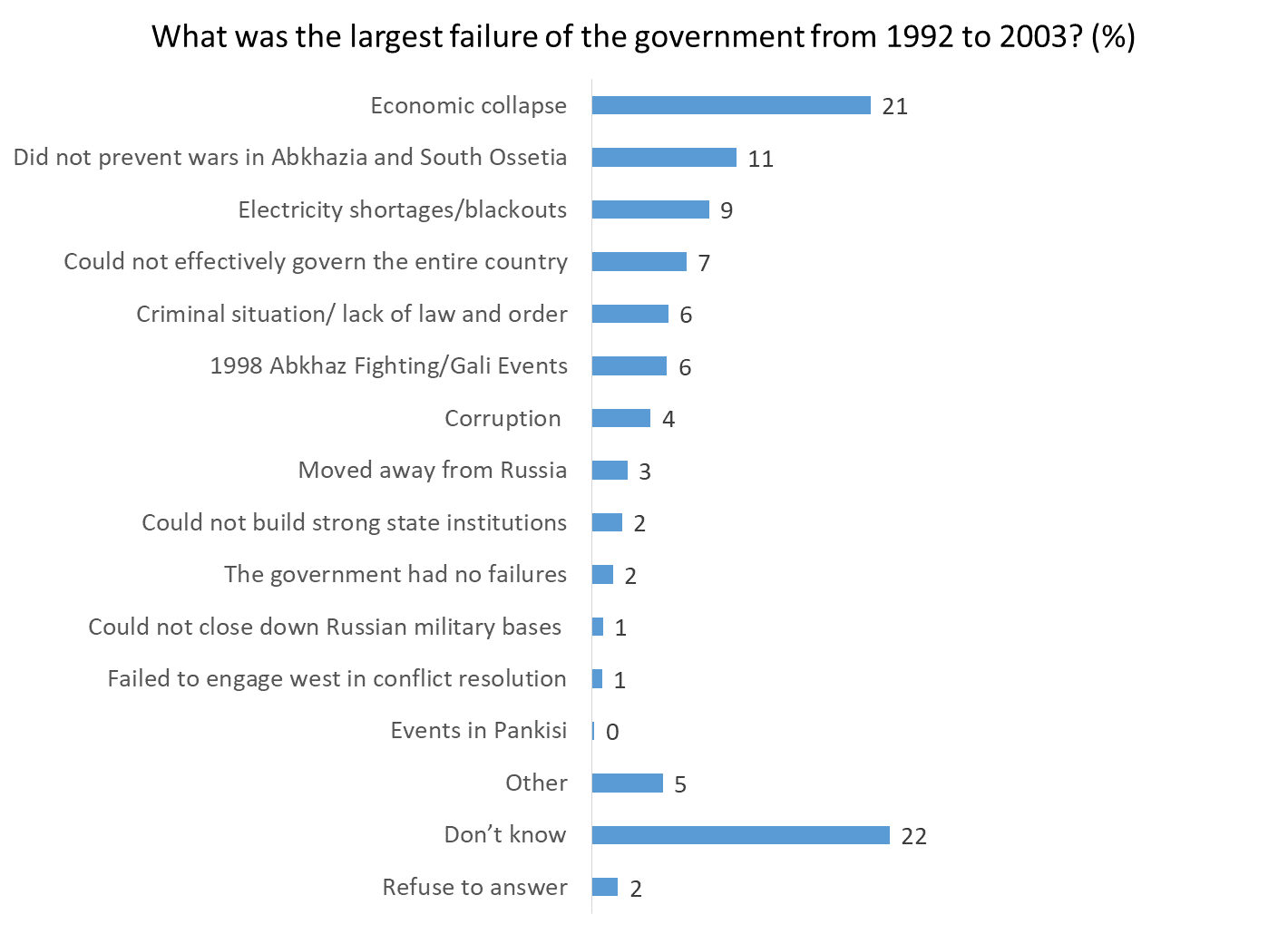 Note: The questions about the failures of each government in Georgia were asked as open questions, which interviewers selected a corresponding category for from a list of potential response options. If the respondent’s response did not match with any of the categories among those available, the response was coded as other and specified. These responses are quite diverse and available in the dataset, here.

The data suggests that people in rural areas, ethnic minorities, and younger people were less capable or willing to name a failure, controlling for other factors. Young people being less likely to name a failure may stem from young people not remembering the time Shevardnadze was in office. 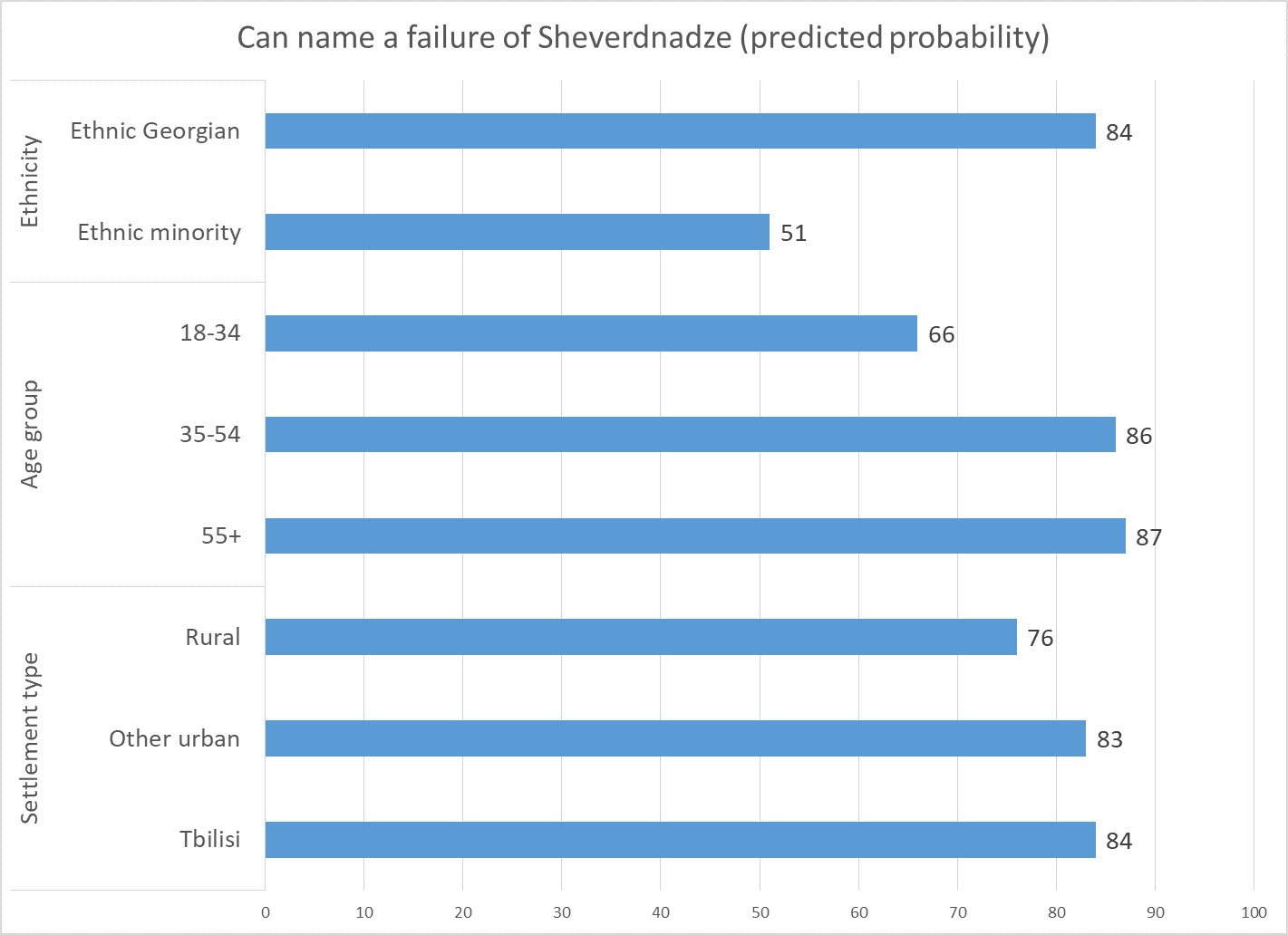 When asked about the UNM, the public tended to say that human rights abuses (27%) and not preventing the 2008 August War (25%) were the government’s largest failures.

Not listening to the public (8%) and crackdowns on protestors (6%) were both also named relatively commonly.

Seven percent answered that the government had no failures. 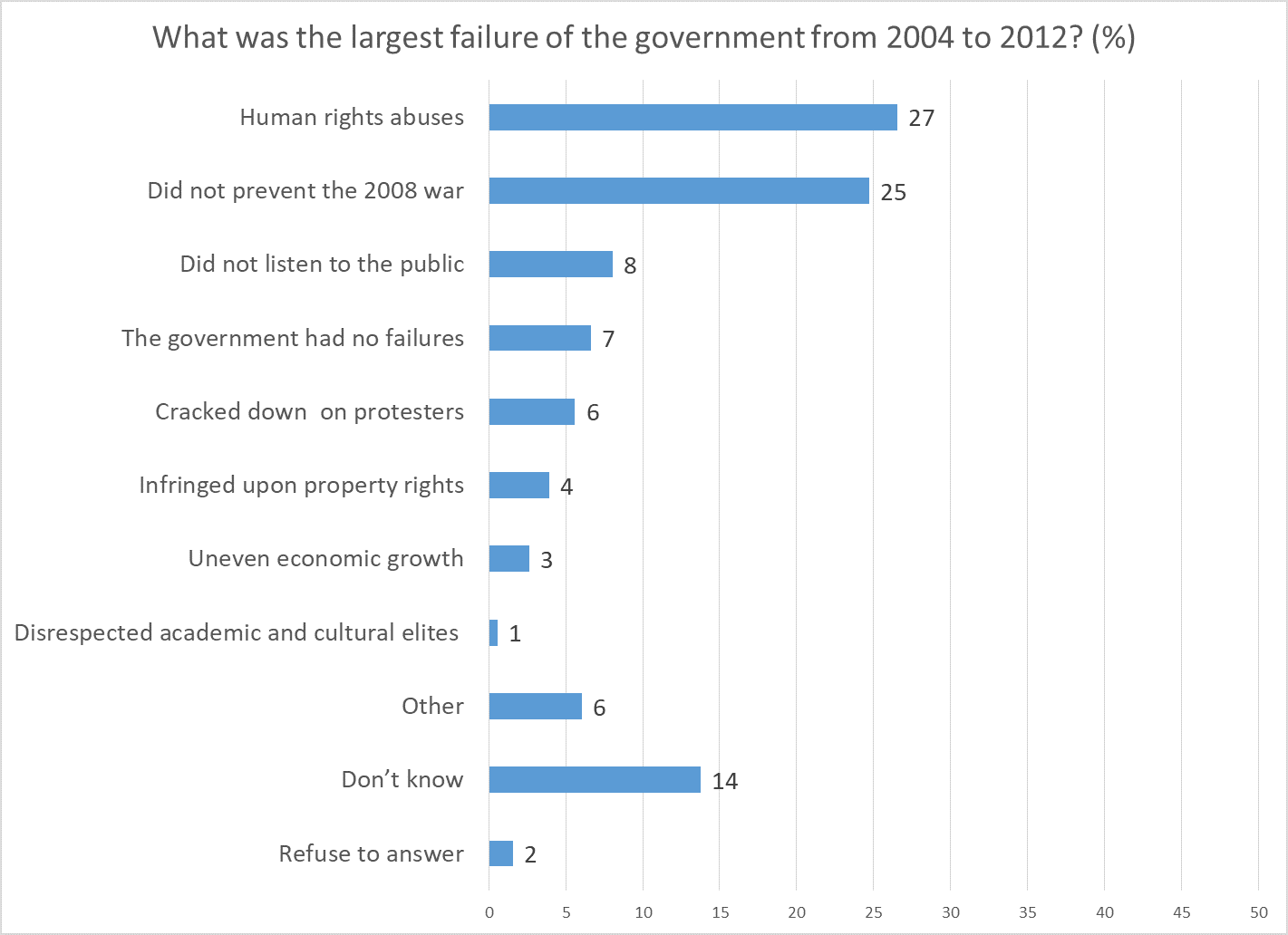 Views of the UNM’s failures varied by party support. Supporters of the opposition were much more likely to think that the UNM government had no failures.

In contrast, Georgian Dream supporters were significantly more likely to report that the violation of human rights was the UNM’s greatest failure. 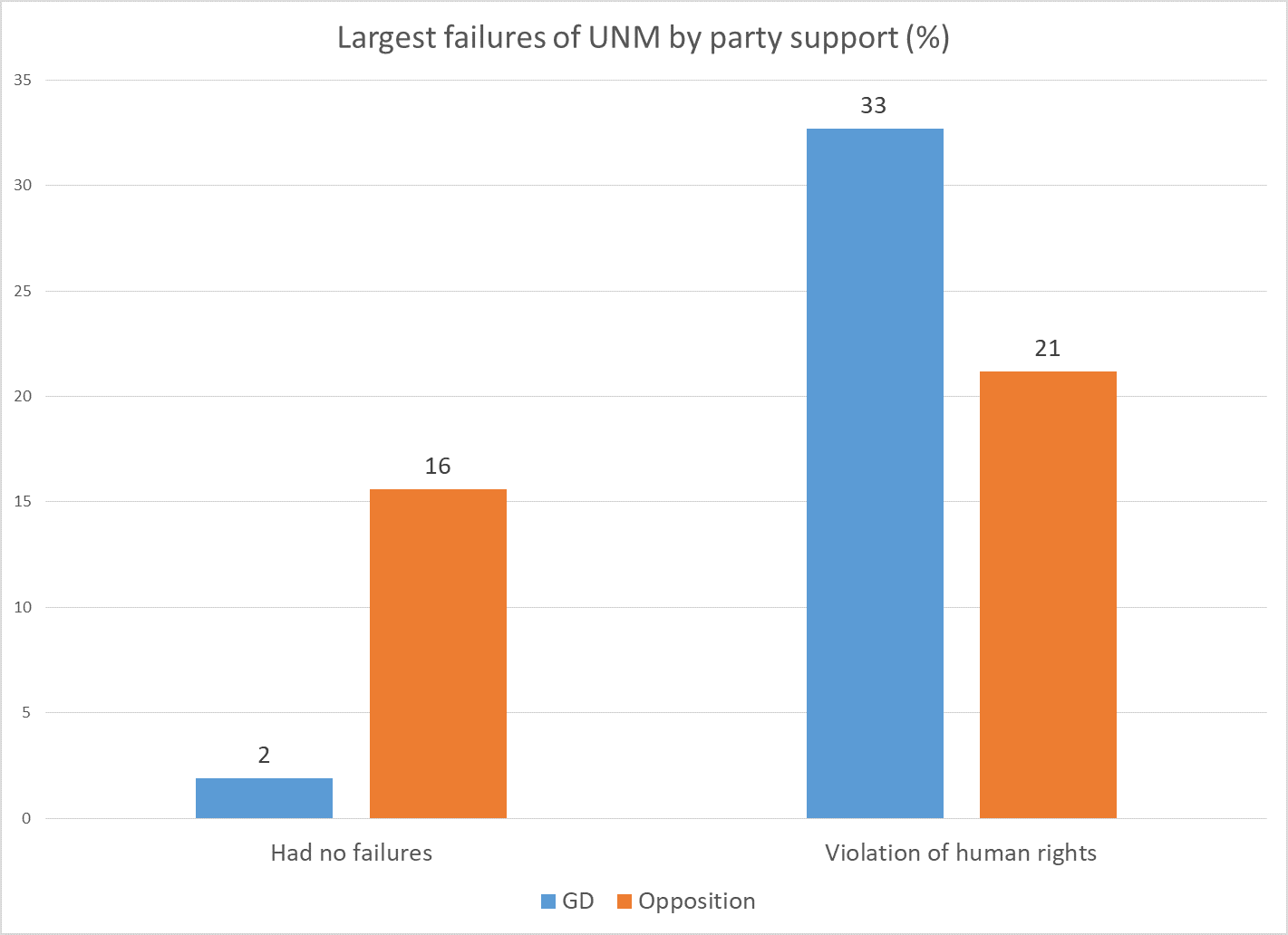 With regard to the failures of the Georgian Dream government, weak economic growth was most commonly mentioned, with a quarter of the public naming this issue.

The next most common response was ‘don’t know’, with one in five not being able to provide a largest failure.

Failure to deliver on pre-election promises (9%), Gavrilov’s nights (9%), and failure to accomplish the restoration of justice (8%) were also named somewhat commonly. One in twenty in Georgia believed at the time of the survey that the government had no failures. 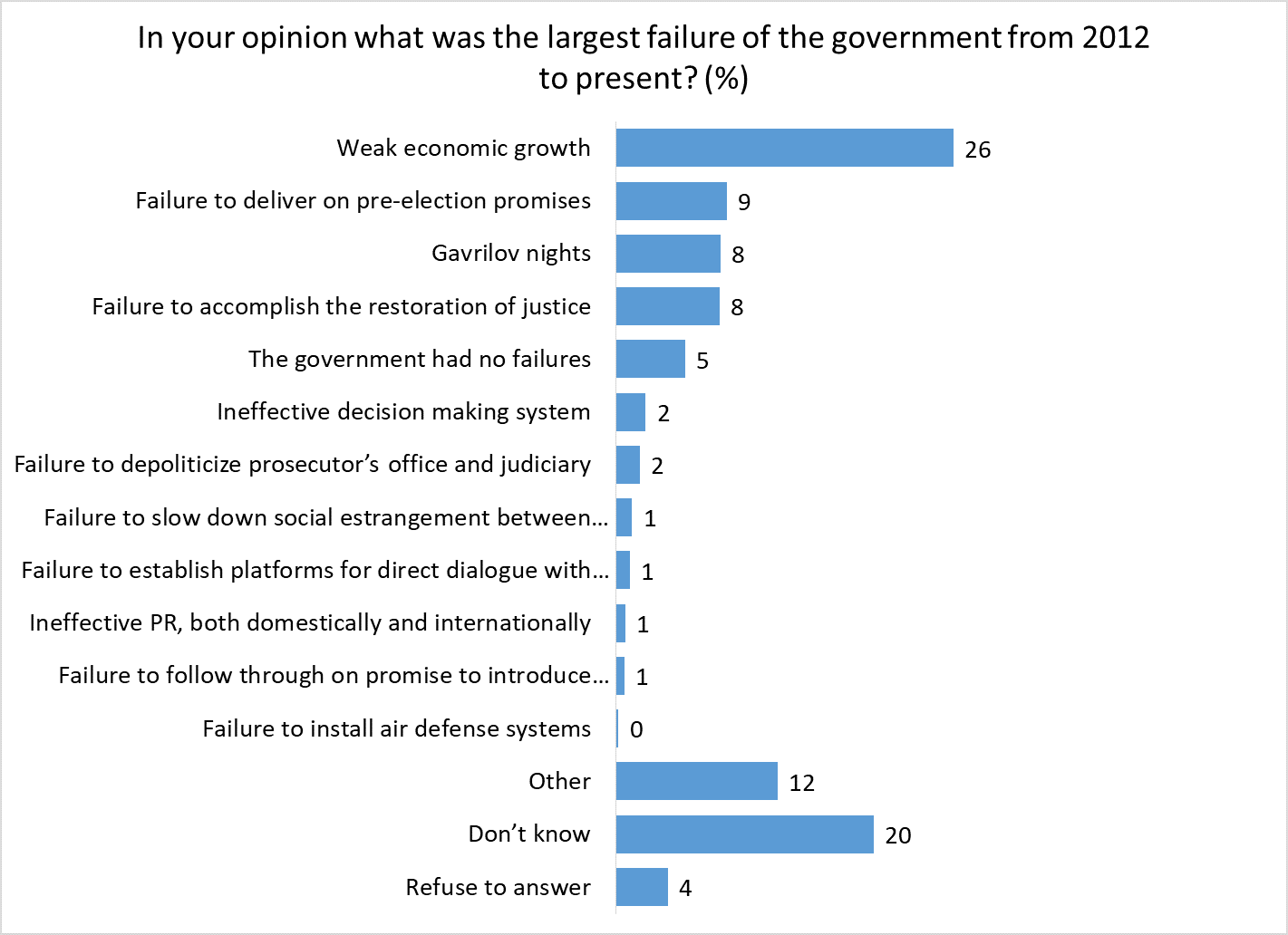 While there was not a partisan difference in terms of whether or not people believed the Georgian Dream government had no failures, Georgian Dream supporters were less likely to report they knew which failure was largest.

In contrast, slow economic growth was the most common response for non–Georgian Dream supporters. They were also more likely to name a failure to deliver on election promises more frequently. 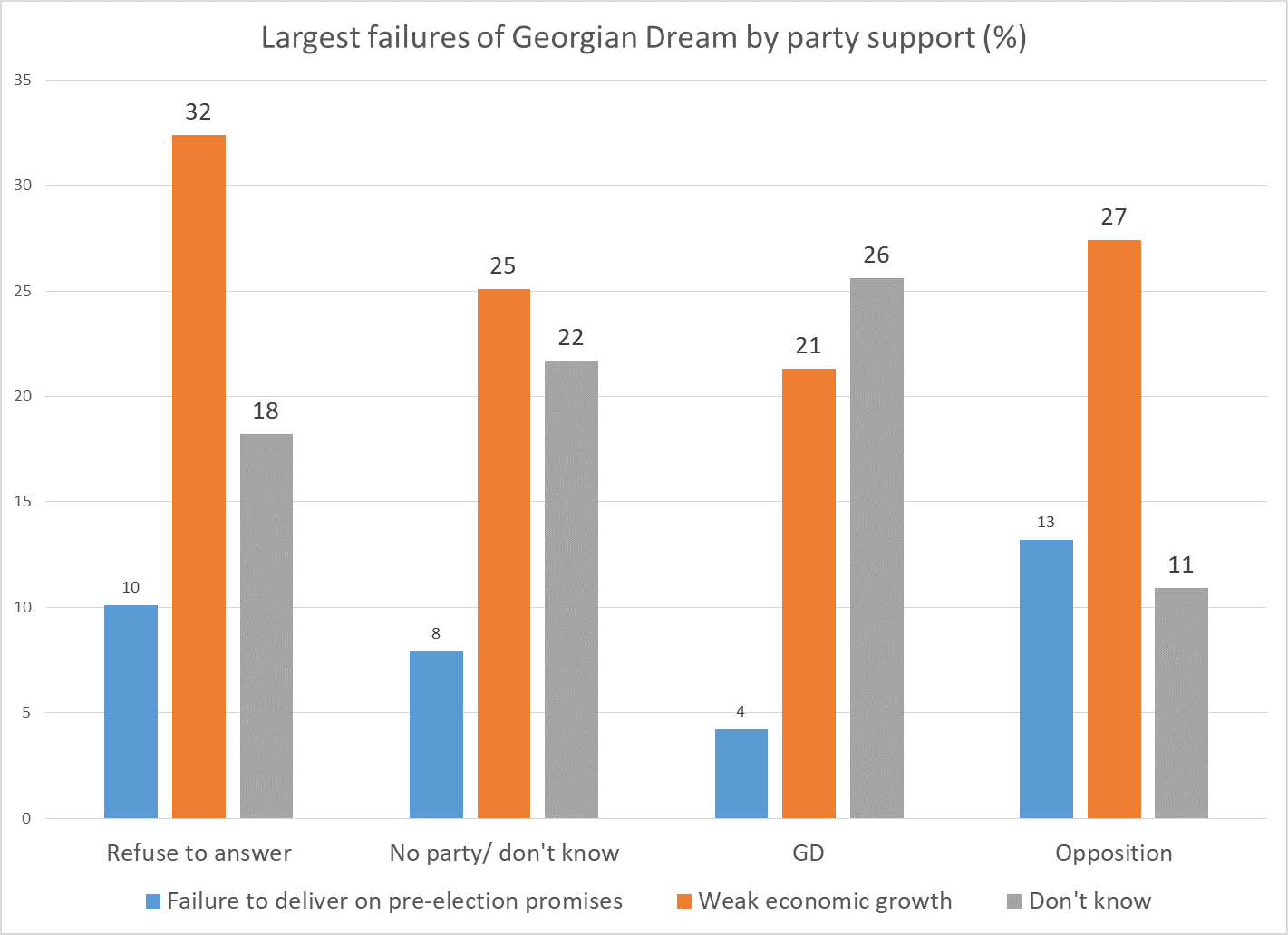 With these failures, the opposing camps of Georgian Dream and opposition supporters tend towards differing interpretations of their party’s failures.

Note: The data analysis presented in this article about Shevardnadze’s failures is based on regression models controlling for respondent age group (18-35, 36-55, 56+), employment situation (working or not), party support (Georgian Dream, Opposition party, no party/don’t know and refuse to answer), education level (secondary or less, vocational education, or tertiary education), sex (female or male), settlement type (capital, other urban, or rural), and IDP status (IDP or not). The data used in this article are available here.