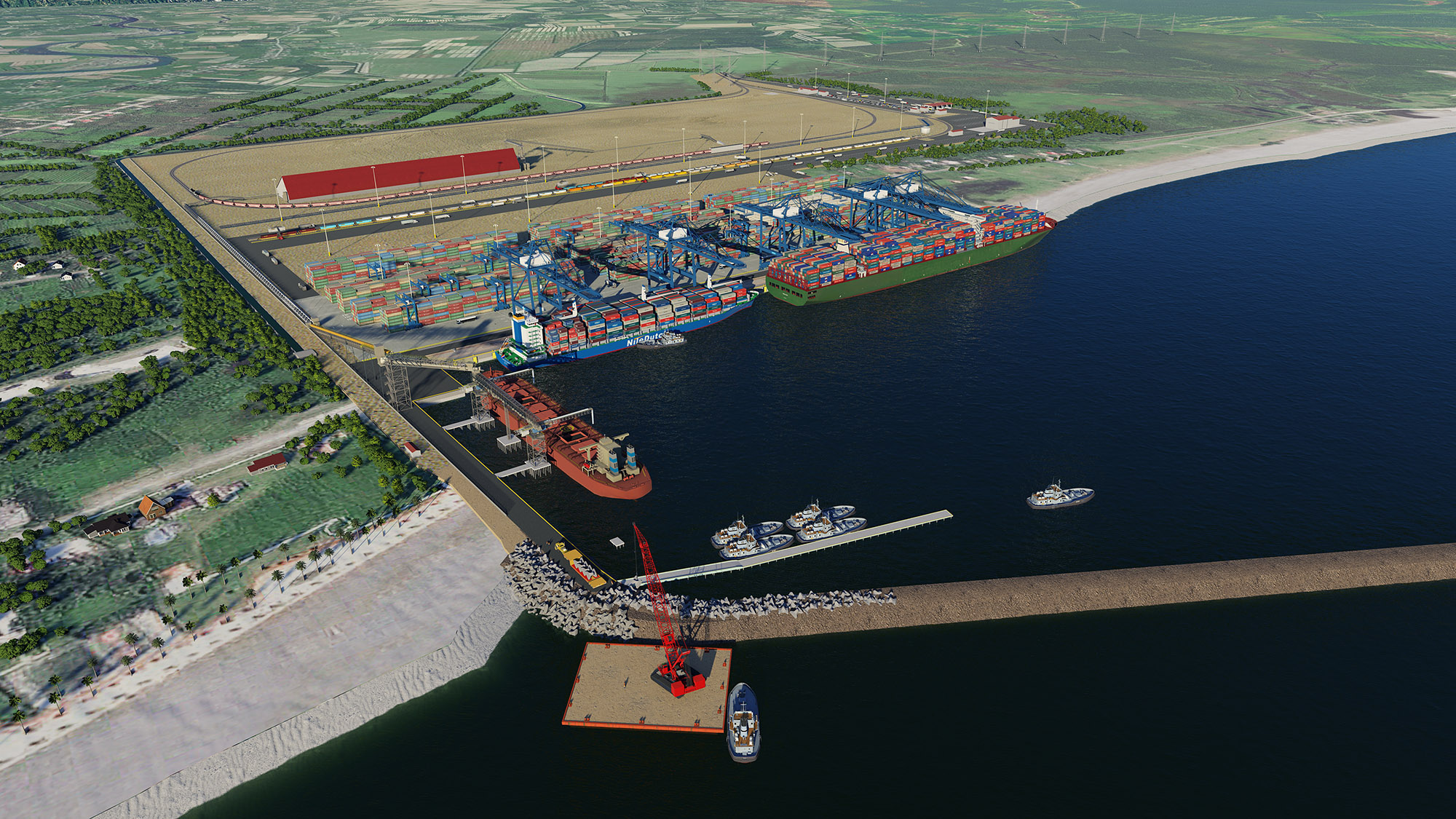 The Georgian government has announced that bidding to take over development of the Anaklia deep sea port will ‘soon’ begin. The government pulled the contract with the Anaklia Development Consortium, who were previously developing the project, earlier in January.

On 21 January, Economy Minister Natia Turnava confirmed the government was to announce a new tender to replace Anaklia Development Consortium (ADC), a group of local and international companies responsible previously for the port project.

She insisted that the $2.5 billion project would have an ‘unprecedented’ cargo capacity and insisted it was the government’s ‘priority’ to make sure it was completed.

Turnava’s assurances were seen by many government critics as damage control after the government announced the cancellation of ADC’s contract on 9 January.

The cancellation was followed by Roman Kakulia, an influential MP in the ruling Georgian Dream party, stating that the Anaklia project, if completed, could complicate future relations with Russia.

Russia’s Novorossiysk port is currently the primary destination on the Black Sea coast for trade cargo from China and Central Asia.

The Ministry of Regional Development and Infrastructure of Georgia told OC Media the date for a new tender would be announced soon.

The small town of Anaklia, located close to Abkhazia, saw fighting during the 1990s. It was further bombed and temporary checkpoints set up in the town by the Russian military during the August 2008 War.

The town’s port, Georgia’s largest infrastructure project, has been marred in controversy and political uncertainty since the departure of Prime Minister Giorgi Kvirikashvili in June 2018.

The government has claimed to have extended the deadline for the Anaklia Development Consortium to meet their financial obligations several times.

The latest extension was announced by Infrastructure Minister Maia Tskitishvili on 16 October, two months after one of ADC’s main shareholders, US-based Conti International, pulled out in August. Tskitishvili called it ADC’s ‘last chance’, telling the consortium it had until the end of the year to meet its financial obligations.

The ministry told OC Media that ADC had failed to submit documents demonstrating that they had $400 million in loans from international financial institutions and $400 million of their own capital available.

ADC, which is currently dismantling construction equipment to clear the site by February, accused the government of ‘undermining’ their efforts to save the project.

Levan Akhvlediani, the consortium’s CEO, told OC Media on 22 January that they would ‘pursue all legal remedies […] including international arbitration in Geneva’.

‘ADC considers that [the government] has wrongfully terminated the investment agreement. The next steps are being consulted with our legal team’, Akhvlediani said.

The port, which was planned to eventually be transformed into the largest harbour on the eastern shore of the Black Sea, was planned to begin operation by the end of 2020.

In May last year, Chinese Foreign Minister Wang Yi visited Georgia. Chinese conglomerate CEFC China Energy owns 75% of the Poti Free Industrial Zone, around 35 kilometres south of Anaklia, which is seen as an alternative to the Anaklia project.

China views Georgia as a potential partner in its Belt and Road infrastructure initiative.

During a visit by Prime Minister Mamuka Bakhtadze to the US in June, US Secretary of State Mike Pompeo expressed ‘hope that Georgia completes the [Anaklia] port project’.

‘Those pretended friends do not have Georgia’s best interests at heart’, Pompeo remarked, referring to Russian and Chinese economic interests in the region.

The day after Pompeo’s remarks, the Georgian government extended the deadline for the Anaklia Port Consortium.

In October, US Chargé d'Affaires to Georgia Elizabeth Rood reiterated the US’s support for the Anaklia project, stating that her government ‘would be happy to see it happen through American investment'.

The Russian government has not explicitly condemned the Anaklia project, though Pompeo’s tone towards Russia and China was criticised by Deputy Foreign Minister Grigory Karasin. However, Russian state-run media has waged a disinformation campaign against the project since 2016.

Much of Georgia’s opposition as well as local civil society groups have expressed scepticism of the government’s claims they are committed to the Anaklia project.

Doubts grew when news that the Georgian government had greenlit construction of an expansion of the Poti port by Dutch company APM Terminals Poti became public in May.

Following public backlash, Economy Minister Natia Turnava revoked the document, which she insisted was not a building permit.

The project became an especially contested political topic in February last year when Georgian banker Mamuka Khazaradze suggested his backing of the port was a factor in the authorities’ ‘deliberate campaign against’ him and his long-time business partner Badri Japaridze.

Allegations by Khazaradze followed the Prosecutor’s Office announcement a month earlier that they had been investigating money laundering charges against Khazaradze and Japaridze.

In February last year, Khazaradze and Japaridze were forced to resign as chair and co-chair of the supervisory board of TBC Bank, which they founded.

The push came from Georgia’s National Bank, which fined TBC and demanded the removal of Khazaradze and Japaridze, for a ‘conflict of interest’ in relation to loans issued by TBC in 2007 and 2008, a case also being investigated by the Prosecutor’s Office.

In July, the bankers also quit their positions as chair and co-chair of the ADC’s Board of Governors.

Khazaradze said their decisions were motivated by their wish not to harm the Anaklia project, something that according to them, the government ‘has sought to torpedo’.

The announcement of their resignations from ADC came days after the Prosecutor’s Office formally indicted both on money laundering charges, and several weeks after Khazaradze and Japaridze announced their intention to enter Georgian politics.

‘Decreased foreign investment not only hurts the Georgian people and their hopes for deeper integration with Western institutions, but it also strengthens Vladimir Putin’s hand in the region’, the US representatives added.

The US Embassy in Tbilisi was also quick to express its ‘concern about the context and timing’ of the charges brought against the bankers soon after their indictment.

Khazaradze goes into politics to ‘save Anaklia’

Khazaradze and Japaridze founded the Lelo for Georgia party in December. The former chair of TBC Bank insisted he would ‘dedicate all his energy to the Anaklia deep sea port project’ and ‘see off’ Georgian Dream founder Bidzina Ivanishvili.

Ivanishvili publicly attacked Khazaradze’s TBC Bank in July 2018, almost three months after he returned to politics as the chair of Georgian Dream.

Ivanishvili’s comeback in late April preceded PM Kvirikashvili’s exit from politics. Ivanishvili accused Kvirikashvili of having failed to strike a ‘balance between the state and business’.

A year after that, former Georgian Dream members Eka Beselia and Davit Chichinadze confirmed that both Khazaradze and the Anaklia project were ‘negatively mentioned’ in a June 2018 party meeting, a day before Kvirikashvhili resigned.

According to most opposition groups, Ivanishvili was unhappy with ADC — co-owned by Khazaradze’s TBC Bank Group and the US-based Conti Group LLC — winning a bid in 2016 to develop the port. ADC was awarded the tender when Kvirikashvili was Georgia’s Prime Minister.

French parliament calls for government to consider sanctions against Azerbaijan

Pope criticised for calling Chechens ‘the cruelest’ troops in Ukraine

Anti-torture watchdog warns that Saakashvili could die without treatment abroad