Georgia’s opposition have refused to concede after preliminary results gave the ruling Georgian Dream party victory in all mayoral races except for the small constituency of Tsalenjikha.

'Elections have been cancelled in this country’, Nika Melia, chair of the opposition UNM Party claimed in the early morning of 31 October while promising to come forward with an action plan in response to the preliminary results.

As polling stations closed at 20:00 on Saturday, both the ruling party and opposition groups celebrated victory based on conflicting exit polls by Gorbi, commissioned by pro-government TV channel Imedi, and by Anova for pro-opposition TV channel Mtavari.

With all ballots counted, Giorgi Kharchilava from the United National Movement (UNM) narrowly defeated Georgian Dream candidate Goga Golordava in Tsalenjikha Municipality with 51% of the vote, making him the only opposition mayor in the country. The municipality in the western Samegrelo Region borders Abkhazia’s Gali District.

Georgian Dream also lost their majority on Tsalenjikha’s municipal council, where 16 out of 27 councillors will be from opposition groups. 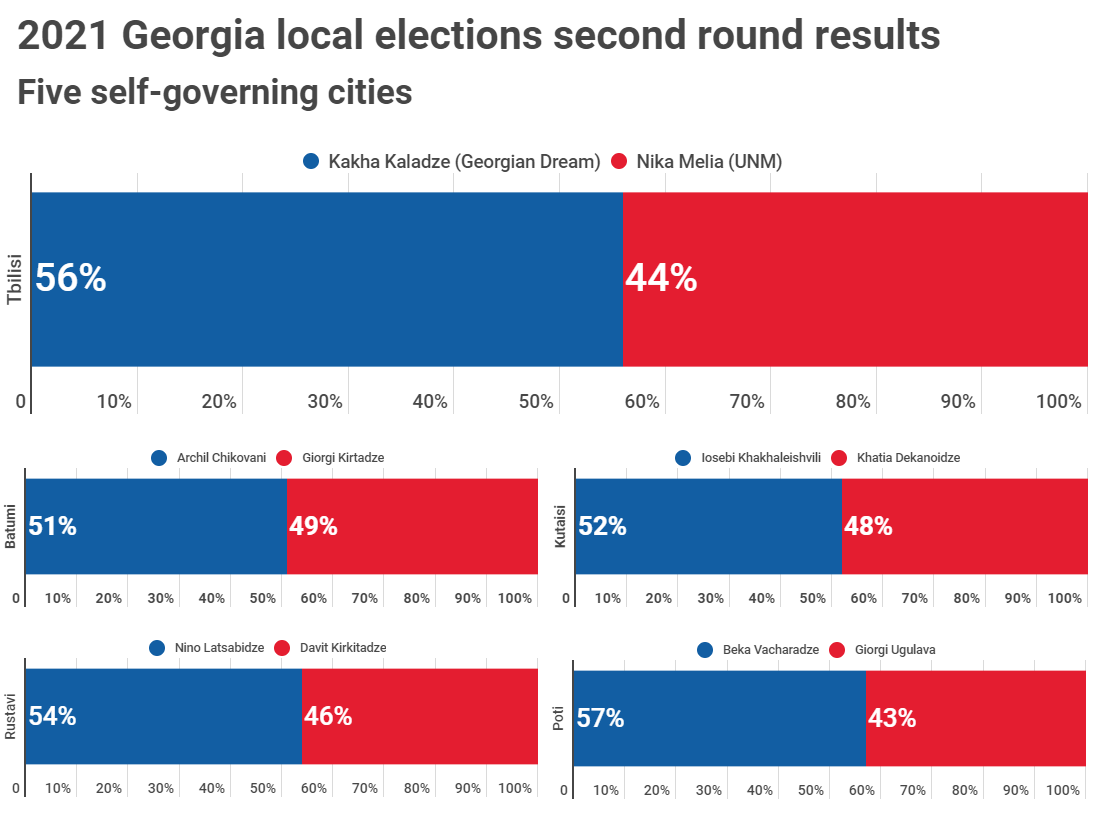 The city of Rustavi is set to have a woman mayor, Nino Latsabidze, for the first time.

In Tbilisi, the incumbent mayor, Kakha Kaladze, was reelected with 56% of votes against UNM chair Nika Melia’s 44%.

Melia had named the leaders of Girchi, Lelo, and Droa as his would-be deputies in an attempt to persuade those on fence to vote for a ‘pluralistic’ alternative to Kaladze’s City Hall.

The municipal elections were the first in which Georgian Dream founder Bidzina Ivanishvili remained tight-lipped, and did not publicly campaign for the party he founded 10 years ago.

The municipal elections also saw the electoral debut of the For Georgia Party, founded by former Ivanishvili ally and former PM Giorgi Gakharia, who won 8% of the proportional vote in the first round. Gakharia attempted to distance himself and his party from the UNM throughout the campaign.

In the second round, his party was competing for 11 majoritarian council seats and one mayoral runoff race. The party is set to win six out of those majoritarian seats, all in Western Georgia.

The voter turnout in the second round was 49%, 3 points less than in the first round.

The 30 October vote was marred with repeated reports of violations, including attacks on journalists.

‘During the second part of the voting day, an intensified tension hindered the voting process in several polling stations’, the Georgian Young Lawyers’ Association reported as polls closed.

The International Society for Fair Elections And Democracy (ISFED), a Georgian election watchdog, reported that their observers were interfered with in multiple locations throughout Georgia.

Commenting on the vote, US Ambassador to Georgia Kelly Degnan also claimed that embassy observers had reported attacks on journalists and observers.

The Ministry of Internal Affairs has launched investigations into at least nine incidents, including four against journalists, and one person has been arrested.

One of the most serious incidents took place in Zugdidi, where five people involved in a fight were briefly detained by police. According to local media, the conflict took place between Zugdidi majoritarian MP Irakli Chikovani from Georgian Dream and observers from Giorgi Gakharia’s For Georgia Party.

Police also launched an investigation into alleged death threats made against a municipal candidate from the UNM.

Police across the country also launched investigations into claims of party activists keeping lists of voters, physically or verbally abusing election observers, and gathering closer to polling station than is allowed.

One of the last reported violations occured when Nika Melia was attacked by an unknown man in Vazisubani District in Tbilisi.