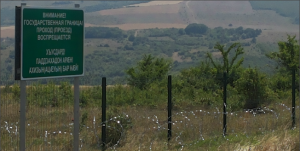 Georgia’s State Security Service reported that the two were illegally detained, and have already complained to the EU Monitoring Mission in Georgia about the case. ‘The central government of Georgia is working to release these people’, they announced.

Detentions along the ‘Administrative Boundary Line’ (ABL) between Georgia and it’s breakaway republics have become common for Georgian citizens, especially those living close by, following the 2008 Russo-Georgian War.

Usually detainees are released after paying a ₽2000 ($30) fine. Georgia frequently raises the issue of detentions during regular meetings of the Incident Prevention and Response Mechanisms, facilitated by the EU Monitoring Mission in Georgia, in the village of Ergneti, near the ABL.