Armenian Prime Minister Nikol Pashinyan and Azerbaijani President Ilham Aliyev have agreed to a peace deal to end the war in Nagorno-Karabakh.

According to the deal, Armenia will hand control of several territories to Azerbaijan but the final status of Nagorno-Karabakh is undefined.

Read all of our coverage of the war including our Voices for Peace series.

An extraordinary meeting of parliament was not held in Yerevan today as the parliament did not meet quorum.

The crowd of protestors outside the Armenian parliament is dispersing after one of the members of the 17 parties who called for the protest called on them to go home.

‘Go home, thank you’, said Armenian Revolutionary Federation member Artsvik Minasyan. ‘We are going to the office and will work, tomorrow we will gather again.’

In an address given today, Nagorno-Karabakh President Arayik Harutyunyan has said that Armenia ‘as a nation’ ‘betrayed’ its soldiers.

He also called out Armenian opposition politicians. ‘The politicians who are trying to find traitors today, let them present information about the participation of their children, their relatives’, he said.

He described chaos on the frontline during the fighting, with reserve troops coming ‘some for several hours’ and ‘some for several days’, in one case, he said, a colonel ‘who was supposed to lead two battalions from Armenia’ refused to ‘take part in the operation planned for the defence of Shushi’.

‘We were obliged to sign a ceasefire at the end because our soldiers were in danger of being surrounded as Stepanakert did not have defenders’, he said.

Harutyunyan called on residents of Nagorno-Karabakh not to ‘stay away from those political uprisings’ and ‘not participate in those processes in the streets of Yerevan’.

Instead, he asked residents to return to Nagorno-Karabakh. ‘Today we are solving infrastructure problems and social issues. There are enough resources to ensure a normal life’, he said.

‘Be sure that we will live better in Artsakh than anywhere else because they are not waiting for us anywhere else’, he concluded.

Armenia’s opposition has announced that they have gathered enough signatures for an extraordinary session of Armenia’s parliament. It is scheduled for 20:00 tonight.

The session has been called for by both opposition parties in Armenia’s parliament, Bright Armenia and Prosperous Armenia. The two parties, alongside extra-parliamentary opposition, have called for the resignation of Prime Minister Nikol Pashinyan and have denounced the recent peace deal.

The leaders of today’s protests in Yerevan have stated they are giving Prime Minister Nikol Pashinyan an ultimatum to resign by 12:00 tonight.

Opposition leader and head of the Homeland Party Artur Vanetsyan has been summoned by Armenia’s National Security Service (NSS). Earlier in the day, Vanetsyan spoke at the opposition rally at Freedom Square where a group of 17 parties called for Prime Minister Nikol Pashinyan’s resignation.

Vanetsyan previously served as the head of the NSS from 2018 to 2019 before leaving the post after a falling out with the Pashinyan administration.

‘We are now entering the National Assembly building and we are starting the process of convening an emergency session. We are waiting for our colleagues from the (opposition) Bright Armenia party’, Prosperous Armenia MP Naira Zohrab reportedly said.

‘Dear My Step bloc lawmakers we are waiting for you in parliament’, she added, addressing Pashinyan’s ruling parliamentary bloc.

Armenpress reports that of the total of 129 protesters detained during the opposition rally at Yerevan’s  Freedom Square today, 41 have been released.

Earlier, police reportedly warned the protest organisers that because martial law is still in force in Armenia, large gatherings are prohibited.

In the statement, they describe the deal as one which ‘has ended the fighting but leaves the region short of a clear and stable peace.’

They also call on the parties signatory to the deal and ‘foreign stakeholders’ to ‘ensure that the ceasefire holds; they also should take steps to ensure that the new regional order has benefits for all involved’.

They also express ‘serious concern’ for ‘the safety of thousands of ethnic Armenians remaining in the region’.

‘An end to fighting reduces some of the risk to civilians, but the deal makes no provision for safe evacuation of the ethnic Armenians who want to leave Nagorno-Karabakh or the adjacent territories’, they write. ‘While those in Stepanakert may be able to depart via the Russian-patrolled corridor, those in other parts of Nagorno-Karabakh or of Lachin that are not contiguous with the corridor, as well as those in Kelbajar, will need guarantees of safe passage if they choose to leave and of protection if any decide to stay.’

They place emphasis on the role of Russia in ensuring the success of the peace deal. Russia, they state, ‘should both cement and clarify the agreement’.

‘If Nagorno-Karabakh, or part of it, is to become a de facto Russian protectorate, it will be up to Moscow to negotiate a viable governance and security plan with both Armenians and Azerbaijanis.’

They conclude by stating that ‘an imposed peace that leaves a generation of Armenians resentful is no recipe for peace’.

‘In a way, it would be a mere mirror image of the reality with which Azerbaijanis have lived for the last three decades. Coupled with the accusations of war crimes coming from both sides, which will also emanate for years to come, it could plant the seeds of the next stage of conflict.’

Kalbajar (Karvachar) resident Alexander Kanayan has published a Facebook post claiming that Russian peacekeepers are removing local residents from their homes and expelling them from the region.

In an interview with Russian state-owned news outlet Sputnik, Nagorno-Karabakh Presidential aide David Babayan said that Kanayan’s statements ‘do not correspond to reality’ as Russian peacekeepers are not currently present in Kalbajar.

Protest leaders currently at Yerevan’s Freedom Square are demanding that Nikol Pashinyan resign as Prime Minister and that a Council of National Salvation be formed. They are also demanding that the lands ‘sold by traitors’ be ‘saved’.

Protestors at Yerevan’s freedom square are attempting to break through the police line in front of the Opera building. There appear to be over 1,000 protestors present at the moment.

Russian authorities have released a map showing the new Nagorno-Karabakh line of contact according to the recent peace deal. The map also shows peacekeeper positions and patrol routes. 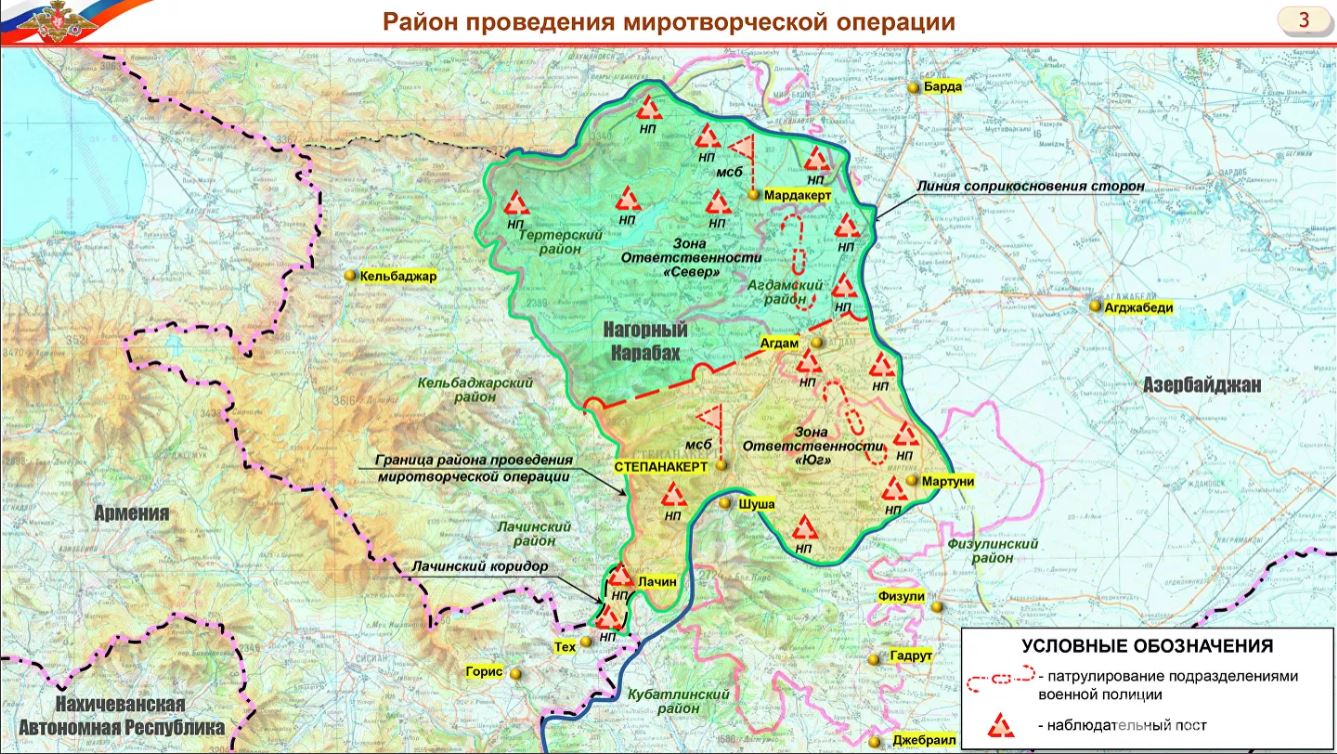 Several opposition leaders have arrived to the protest in Yerevan, including from the Prosperous Armenia Party and Armenian Revolutionary Federation. Protesters have entered the city’s Freedom Square.

There are others on the sidelines of the demonstration chanting ‘shame’ at the protesters.

There is a heavy police presence and several people have already been arrested.

A video shared on Telegram appears to show a group of men breaking into the office of the Open Society Foundation (OSF) in Yerevan. That same night several dozen protesters also attacked the offices of Azatutyun, beating up several journalists.

The OSF in Armenia has, in recent years, been opposed by a number of far-right groups in the country, who have accused the organisation of being complicit in an anti-Armenian conspiracy.

3. Pashinyan confirms the city of Lachin to be handed to Azerbaijan

Pashinyan confirms the city of Lachin to be handed to Azerbaijan