The leader of the opposition Nykhas Party, Alan Gagloyev, has come first in the first round of South Ossetia’s presidential election, surpassing the vote count of incumbent president Anatoly Bibilov.

On Sunday night, state-run news agency RES reported that with 95% of ballots counted, Gagloyev had received 37% of votes (10,705) while Bibilov trailed on 33% (9,706), citing the Central Election Commission (CEC).

A run-off between the two is expected to be held on 24 April.

In the early hours of Monday morning, President Bibilov conceded that a run-off was inevitable.

‘As a presidential candidate, I am happy to have a rematch in a runoff with Alan Eduardovich Gagloyty [the Ossetian version of Gagloyev’s surname] because two ideologies are to compete in the second round. I presume you all understand what ideologies I am talking about’, Bibilov wrote on his Telegram channel, without specifying further.

According to the local authorities, in addition to six electoral districts in South Ossetia, over 39,000 South Ossetians were eligible to cast their ballots in two polling stations in Vladikavkaz, in the Russian Republic of North Ossetia, and in Sukhumi (Sukhum) and Moscow.

Gagloyev, then an employee of the local KGB, first ran for president in 2017, though he failed to win more than 10% of the vote. In addition to losing, he was accused by several rivals of abusing his office to mobilise votes.

The vote was condemned as illegitimate by a number of countries and organisations, including the Georgian government, the EU, NATO, the USA, Azerbaijan, and Ukraine.

Observers from Russia, Venezuela, Abkhazia, and the Luhansk People’s Republic oversaw the voting.

Gagloyev endorsed by other candidates

Several opponents of President Bibilov voiced concern about allegations of vote-buying in Vladikavkaz.

Among those gathered were three of the presidential candidates, former MP Dmitry Tasoyev, Deputy Speaker Aleksander Pliyev, who was nominated by the Popular Party, and MP Garry Muldarov. All three have endorsed Gagloyev in the second round. 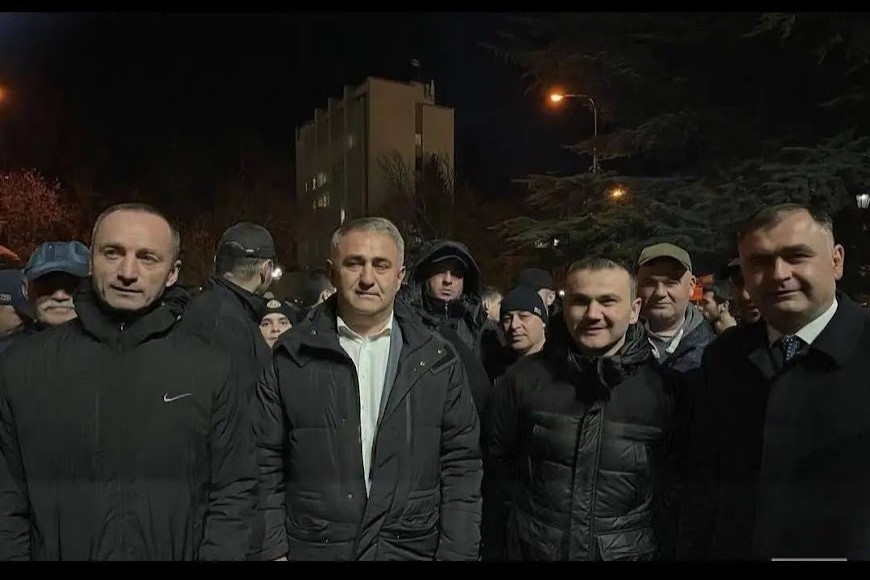 The electoral authorities denied 12 other prospective candidates to run for the presidency. These included two key opposition figures — Ibragim Gassiyev, who served as South Ossetia’s Defence Minister under Bibilov until recently, and MP David Sanakoyev.

Among those calling to gather in central Tskhinvali was the Civil Platform, a group born of the protests over the 2020 death in custody of local resident Inal Dzhabiyev. Dzhabiyev’s death triggered months of political unrest in South Ossetia.

The perceived lack of investigation into Dzhabiyev’s death was among several scandals that have damaged Bibilov during his latest term.

Bibilov was also criticised for failing to ensure that South Ossetian soldiers sent to take part in Russia’s military assault against Ukraine were properly equipped.

In a twist of events several days before the vote, South Ossetians were surprised to learn that Bibilov had appointed former South Ossetian president and long-time critic Eduard Kokoity as his representative to oversee a ‘humanitarian mission’ and to ‘provide help’ to South Ossetian soldiers in Ukraine.

In his Monday morning appeal to voters, Bibilov urged supporters to mobilise for the run-off, reminding them that his victory would lead to a referendum on South Ossetia joining the Russian Federation. Bibilov announced his intention to hold the plebiscite on 30 March.

While generally supporting the idea, like other presidential contenders, Alan Gagloyev seemed less than enthusiastic about the latest initiative.

A day before the election, Gagloyev suggested that the move had not been coordinated with Russia and that such one-sided initiatives could ‘discredit’ Russia’s image in South Ossetia.

‘I believe that the current authorities of the Russian Federation, represented by President Vladimir Vladimirovich Putin, are still busy with other issues, I think with more serious ones’, Russian state news agency TASS cited Gagloyev as saying on 9 April.