The EU-Georgia Parliamentary Association Committee has failed to adopt a joint statement after officials from the ruling Georgian Dream party rejected critical amendments. A copy of the draft statement seen by OC Media revealed criticisms of the Georgian Government from MEPs in several key areas.

At the committee in Strasburg on 12–13 February, MEPs had wanted to include condemnation of the Georgian Government’s ‘politically motivated’ prosecution of opposition leaders, the selection process of Supreme Court judges, the misuse of administrative resources during elections, pressure on the media, the violent dispersal of protests, and more.

MEPs had also wanted to include a call for the government to honour their promise to introduce a proportional electoral system before the 2020 parliamentary elections.

Several MEPs criticised the Georgian government after the document was blocked.

Marketa Gregorova, a Czech MEP from the Greens/European Free Alliance group wrote on Twitter that ‘it is a signal to the Georgian government, that we see the controversies and take them seriously’.

Former Lithuanian Defence Minister and MEP Rasa Jukneviciene told Georgian journalists that the joint statement the Georgian government had wanted to pass was ‘weak’ and didn’t reflect the situation in Georgia.

‘We wanted the text to be more balanced, but it didn’t happen. The Georgian ruling party delegation blocked all amendments and this is frustrating. After all of these official and unofficial discussions, I see that they can’t realise the situation. […] We have the same message for Bidzina Ivanishvili: he is responsible for this situation’, Rustavi 2 quoted Jukneviciene as saying.

Members of the Georgian Dream delegation labelled their statements ‘superficial’ and ‘not alarming’. They went on to blame the opposition for the failure to pass a joint statement, calling their statements at the EP ‘disgusting’.

The conviction of Gigi Ugulava

The initial version of the draft document, which is less critical of the Georgian government, was sent to delegates in February for revision. They received unified proposed amendments by all parties a week later.

Polish MEPs Anna Fotyga and Kosma Zlotowski from the European Conservatives and Reformists Group suggested the document note that the EU-Georgia Parliamentary Association Committee ‘warns that series of politically motivated arrests and judgements, notably in the recent case of Gigi Ugulava, will make any further dialogue between the ruling party and the opposition impossible’.

Lithuanian MEP Rasa Jukneviciene also suggested that ‘efforts to maintain effective dialogue have been seriously undermined’ by the ruling against Ugulava.

‘Gigi Ugulava has already served over three years of jail time; the timing of his current sentencing has all the ingredients of selective justice aiming to undermine the current political dialogue on the electoral law’.

‘Such cases undermine rule of law and democracy in Georgia and may seriously hamper the country’s European integration efforts’.

Jukneviciene’s amendments also urged the Georgian Government to introduce ‘an electoral system ensuring proportionality’ before the 2020 parliamentary elections in order to ‘rebuild trust of voters and Georgia’s EU partners’.

‘Not delivering on this promise made by the chairman of the ruling party Bidzina Ivanishvili to the Georgian people has damaged the citizens’ trust in the political process and has unnecessarily further fuelled political tension’.

Czech MEP Marketa Gregorova suggested the document note that the ‘Georgian government will prepare promised measures to switch to the proportional electoral system in the promised time frame without any further delay’.

Both, Georgian opposition delegates and MEPs suggested that concerns be expressed about the misuse of administrative resources in election campaigns.

Rasa Jukneviciene noted that during 2018 Presidential elections, the ‘process was undermined by the undue advantage enjoyed by the government’.

She criticised the ‘use of violent rhetoric, cases of misuse of administrative resources, undue pressure on voters and intimidation, vote buying, announcement of a massive debt relief offered by a private institution linked to the chairperson of the ruling party, and the negative character of the campaign’.

Anna Fotyga and Kosma Złotowsk recalled the assessment of presidential elections by the OSCE/ODIHR-led International Election Observation Mission and said that ‘this assessment was much more critical than previous ones and shows a significant backsliding in democratic processes’.

Fotyga and Złotowski noted concerns should be expressed about the ‘appointment of 14 new Supreme Court justices for lifetime tenures before their qualifications were fully evaluated’.

Gregorova also suggested concerns be expressed regarding the ‘violent attacks against opposition figures and participants of peaceful rallies by individuals linked to the ruling party; calls on the Georgian authorities to ensure that perpetrators of such attacks are held to account and to ensure that such attacks will not occur in the future, especially considering the upcoming electoral campaign’. 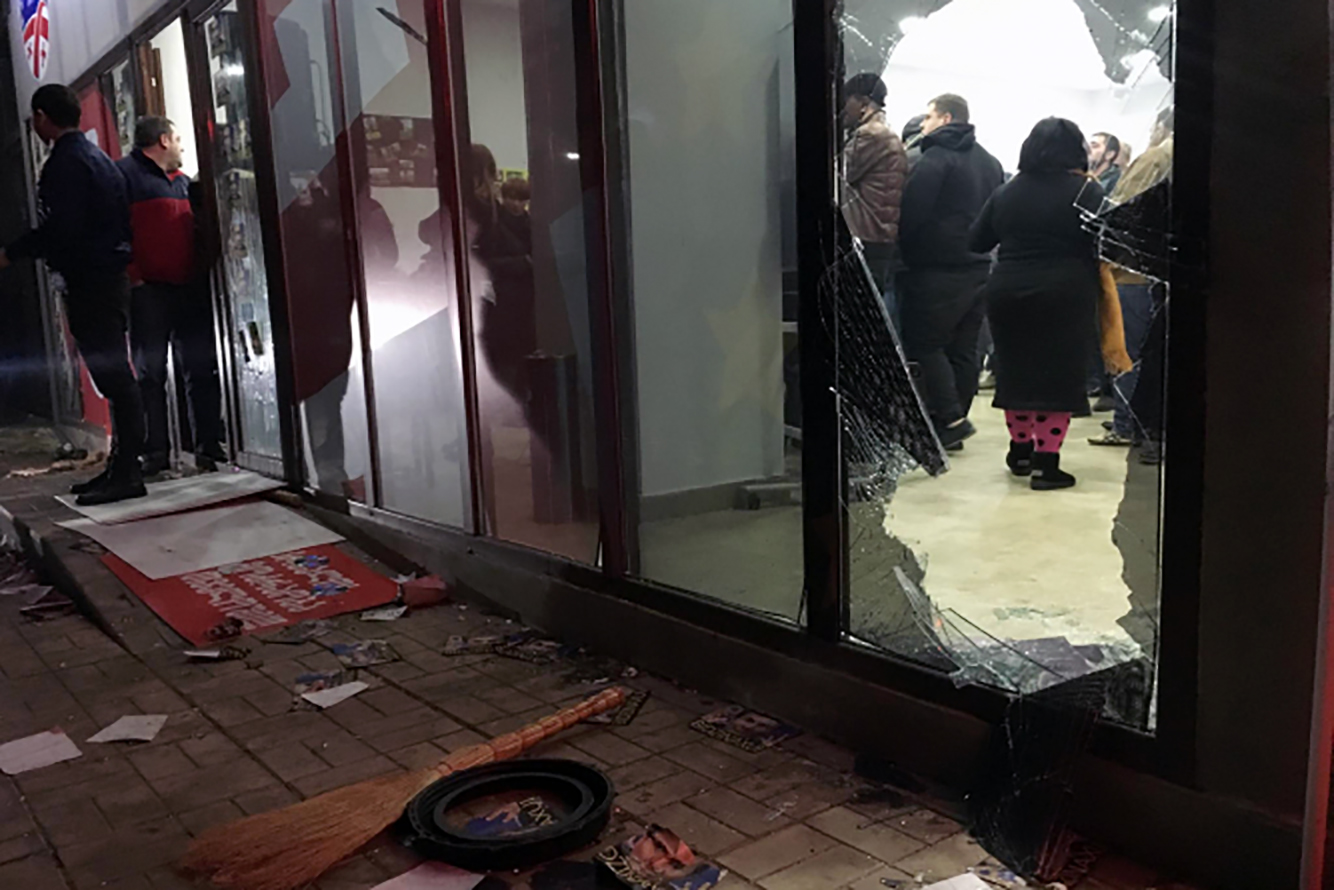 Georgian opposition MPs, Salome Samadashvili from the United National Movement (UNM) and Oto Kakhidze from European Georgia suggested that concerns be expressed over the level of force used in dispersing protesters.

They also think concerns should have been expressed in the document that ‘violent incidents against opposition leaders and peaceful demonstrators is often unpunished’.

‘While any government is entitled to use lawful and proportionate force against violent unrest, violent attacks on peaceful demonstrators and opposition leaders by individuals linked with the Georgian Dream and impunity for such violent acts set extremely dangerous precedent for the upcoming 2020 electoral campaign’, they suggested be written.

In a paragraph that expressed concern over the ‘excessive use of force in the dispersal of what started as a peaceful protest but evolved into a violent attempt’ in Tbilisi, Irakli Beralia, the head of Parliament’s Foreign Affairs Committee suggested condemnations be noted regarding ‘violent attempts managed by certain opposition leaders and their supporters to break into the Parliament building’.

Another topic identified by MEPs identified was development around the Anaklia Deep Sea Port project which was in ‘Georgia’s and the EU’s interests both from economic as well as security prospective’.

The government pulled the contract with the Anaklia Development Consortium, who were developing the project, in January.

Polish MEPs, Anna Fotyga and Kosma Złotowski from the European Conservatives and Reformists Group suggested the document point out that the EU had already provided over €300,000 to the project in the belief that it was ‘an important Trans-European Transport Network Project’.

They also suggested it be noted a need for ‘meaningful participation of representatives and officials of opposition parties in any joint project under this umbrella’.

Another topic raised by MEPs was pressure on the media.

Fotyga and Złotowski noted concerns should be expressed in the document ‘regarding ongoing legal cases against owners and managers of independent TV stations, including Giorgi Rurua — shareholder of Mtavari Channel, Avtandil Tsereteli — owner of TV Pirveli, Nick Gvaramia — director and founder of Mtavari Channel, and Zurab Gumberidze — Director of TV Formula’.

Samadashvili and Kakhidze added that the joint statement should express ‘deep concern that critical media outlets often become subject of pressure from the Government’.

Gregorova expressed concerns over a network of fake pro-government accounts identified and deleted by Facebook and said that they should condemn ‘the governmental links involvement in the disinformation campaign containing hundreds of fake pages and groups on social media involved in the actions of December 2019’.