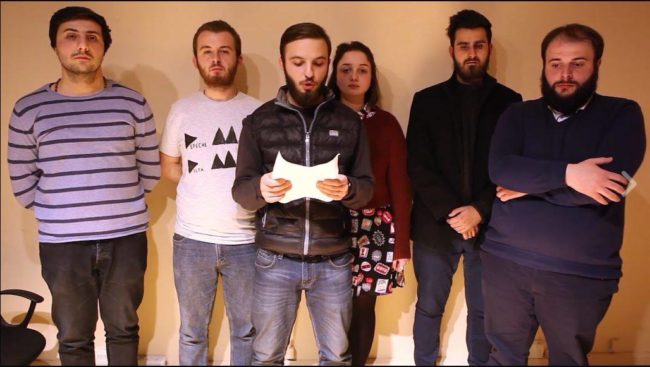 Two employees of popular bookshop chain Biblus, who complained about and campaigned against harsh working conditions and poor overtime compensation, were fired by the company on 15 February.

Their discharge was protested by student movement Auditorium 115, who entered the main Biblus bookstore (Biblus Gallery) on Tbilisi’s central Chavchavadze Avenue. The company called the police, however, the Ministry of Internal Affairs confirmed to OC Media, that there were no violations of the law.

Giorgi Kapanadze, the main speaker in a video posted online by Auditorium 115 on 9 February, told OC Media that he was fired for not being on time to work. ‘The second reason for my discharge was ‘reputational damage’, Kapanadze told OC Media on 16 February. ‘I did not sign the discharge documents, because I don’t consider myself guilty’, he added.

Biblus declined to comment on the firings to OC Media, however, they told InterPressNews, which belongs to the same holding group as Biblus, that the actions of Auditorium 115 were an ‘intrusion’ and had ‘obstructed’ the company's staff, although this was not confirmed by police. The company called the whole campaign against them ‘false’ and ‘defamatory’.

‘Any violation of an employee's contract or internal regulations, abuse of colleagues, or wrongful use of the company’s resources by any employee of Biblus will always be followed by the relevant legal response. Violation of above-mentioned principles was the reason for discharging several employees of Biblus’, their statement read.

According to Giorgi Kapanadze, he worked as a sales assistant and was paid ₾300 ($115) a month working six days a week, ten hours a day, and sometimes he and his fellow assistants had to work not only as sales assistants, but stocking shelves and as janitors or cashiers as well. ‘But we’re not paid for any of those activities’, said Kapanadze in the video, which caused controversy around Biblus.

In a response to the video posted on Facebook, Biblus’s administration denied the allegations and said that working hours in Biblus are eight hours per day, and that staying longer is voluntary, in which case, they claim, employees are paid for overtime.

The company is a leading book retailer in Georgia, and runs 52 shops across the country employing more than 200 people. Despite the claims of low salaries, Biblus argues that employees are given bonuses, which, according to them, sometimes exceed the original salary. However, employees stress a lack of transparency in the bonus system.

As OC Media reported, the case comes at a time when labour rights in Georgia have become a critical issue, with several activist groups describing the situation as a ‘social crisis’. Georgian supermarket chain Fresco was investigated two weeks ago for alleged exploitation and forced labour, and more than 300 people were fired from a nitrogen plant in Rustavi, a town 20 km south of Tbilisi. Additionally, the Georgian Public Broadcaster (GPB) is planning to shut down all talk-shows, which will result in the mass dismissal of employees.

Protest rallies and demonstrations are planned to protest against Biblus and Fresco, and to support employees of the Azoti nitrogen plant and GPB.

5. Explainer | What happened in Armenia and Azerbaijan on 13–14 September?