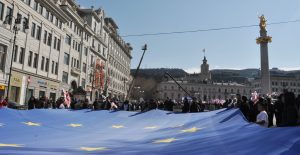 Georgian President Giorgi Margvelashvili congratulated Georgian citizens on the EU Parliament’s final decision to offer them visa free travel to Europe. He remarked that people living in the de facto republics of Abkhazia and South Ossetia will also be able to travel to Europe without a visa.

Prime Minister Giorgi Kvirikashvili also commented during a press conference that Abkhazians and South Ossetians can easily take advantage of this if they obtain Georgian biometric passports.

‘We are particularly happy that our Abkhaz and Ossetian fellows will be able to enjoy all the privileges of strong relations with Europe — visa free movement in European countries, access to the European market for businessmen, taking part in EU education programmes and many others,’ Margvelashvili said.

Abkhazia’s Foreign Minister published a statement explaining that Abkhazians won’t be able to enjoy the visa free movement granted to Georgia, as they are citizens of Abkhazia.

‘When the plan for the so-called neutral passports failed, the Government of Georgia decided to use more of a trap for Abkhazian citizens, which is visa liberalization with EU Member States. Undoubtedly, these new attempts by Tbilisi are doomed to fail’, the statement reads.

Abkhazia has called for the EU to stop supporting Georgia’s ‘isolation policy’.

Georgia’s Minister of Euro-Atlantic Integration, Vitkor Dolidze, said on Friday that the ‘occupation regime of Vladimir Putin’ is behind the statement from the Abkhaz foreign minister.

He told journalists that everything written in the statement comes from the Putin regime, and not Abkhazia.

‘Still, we will continue taking the same measures as we have before’, he remarked.

On 2 February, the European Parliament abolished the block’s visa regime for Georgians visiting the Schengen Area, with 553 MPs voting for, 66 against, and 28 abstentions.

The visa free regime will come into force as soon as a suspension mechanism, which would allow EU states to suspend visa free travel if necessary, is enforced.

In 2011, the Georgian government introduced ‘neutral passports’ — a form of document for people from Georgia’s breakaway regions that did not explicitly state that they were Georgian citizens. This was meant to be a humanitarian type document to help people in Abkhazia and South Ossetia receive social services from Georgia and to more easily travel abroad.