With the pandemic still raging and accompanying economic restrictions still in force, Georgians are unsurprisingly pessimistic about their economic future. This holds true especially for supporters of the opposition United National Movement Party, above all other party supporters.

COVID-19 restrictions have impacted people’s economic activity heavily. This is reflected in key economic indicators such as GDP, which declined by 5.9% year on year between January and November 2020.

The survey, conducted in December 2020, shows that people’s expectations of their financial futures tend towards pessimism and uncertainty. Only around 1 in 10 Georgians said they expected their family to be better off financially in one year’s time; 29% said they would be in the same situation financially and 37% said that they would be worse off.

Around a quarter of people said they were uncertain of what their financial situation will be like in one year’s time. 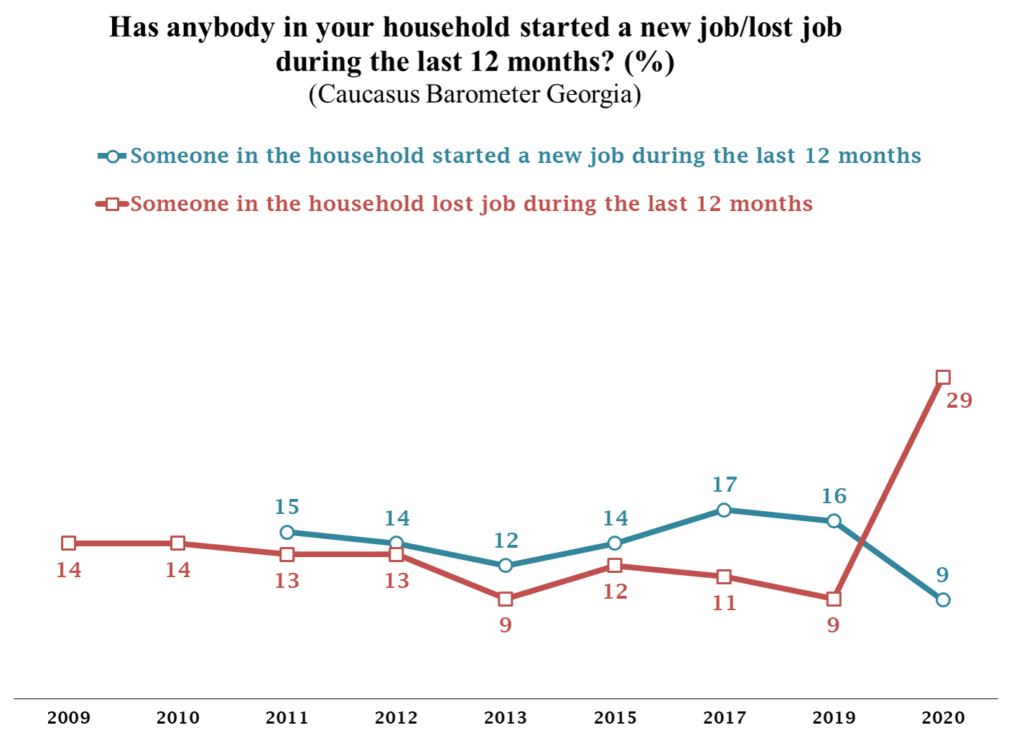 Analysis of the data showed differences in people’s attitudes depending on their age, and party affiliation. There were no significant differences between people of different sexes, settlement types, education levels, employment statuses, or economic situations.

People aged 35–54 were 1.3 times more likely to say that their household would be worse off in a year’s time compared to younger people and those over 55.

The data showed that supporters of the United National Movement (UNM) were significantly more pessimistic about their future financial situation than supporters of other parties.

People who named the UNM as the party closest to them were 1.9 times more likely to have negative expectations than those who prefered Georgian Dream.

In general, UNM supporters were also more likely to report losing a job than people who supported other parties.

Nevertheless, the link between party support and financial expectations holds whether or not someone in the household lost a job or not.

The data showed that more than a third of Georgians were expecting their financial situation to be worse in one years’ time. Around a quarter were uncertain of the near future.

Expectations were worse for people aged 35–54 years old, those whose family members had lost a job during the last 12 months, and UNM supporters.

For more data on people’s attitudes towards various issues see the Caucasus Barometer 2020 dataset on CRRC’s online data analysis tool. The views expressed in the article are the author’s alone, and do not reflect the views of CRRC Georgia, the National Democratic Institute, or any related entity.

2. Is an interconnected Caucasus on the horizon?

3. Abkhazia is preparing for a tourist bonanza

5. Kadyrov causes outrage in Daghestan with comments on Imam Shamil

Abkhazia is preparing for a tourist bonanza

Opinion | In Azerbaijan sex is a weapon

Abkhazia is preparing for a tourist bonanza

Is an interconnected Caucasus on the horizon?

Datablog | Why do Georgians not want to vaccinate?