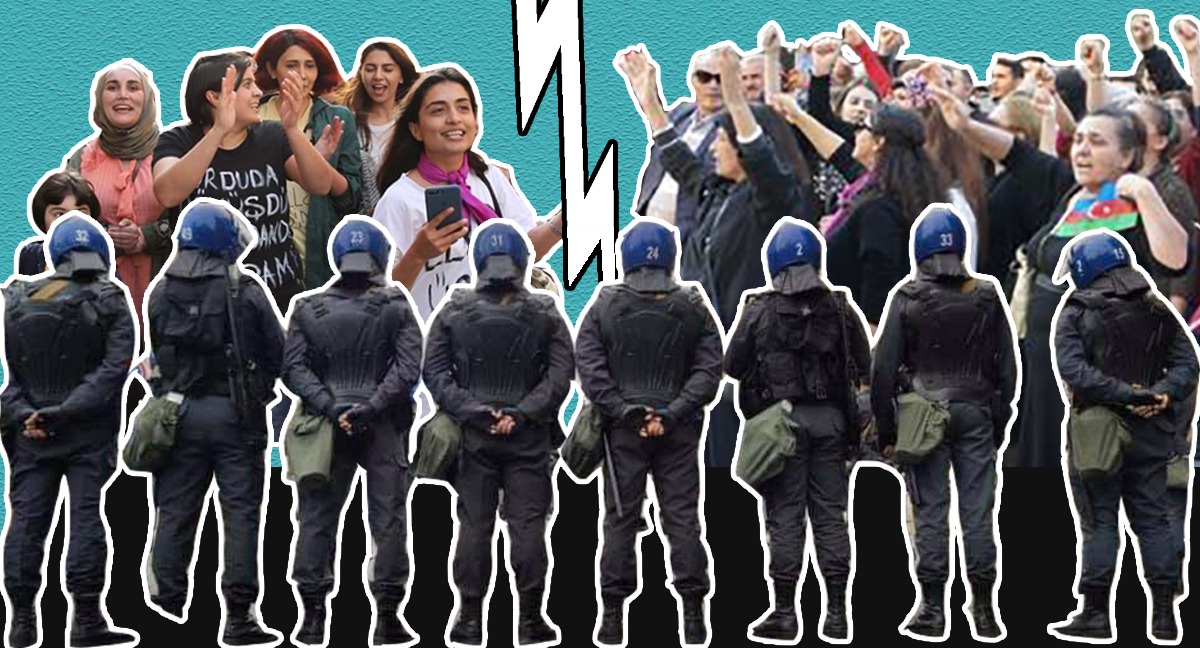 Recent protests in Azerbaijan suggest that, after a long period of stagnation, the nature of protest is changing. However, for a radical transformation of the political landscape to take place, the country’s traditional opposition parties need to reach out and appeal to the more progressive youth movements.

On 19 October, thousands of Azerbaijanis took to the streets of central Baku in the largest protest since 2013. The protest was organised by the National Council of Democratic Forces, an opposition coalition spearheaded by the Azerbaijani Popular Front Party (APFP).

The APFP is one of Azerbaijan’s ‘traditional’ opposition parties. Founded in 1992, the party has fought for decades for democratic change — but without changing their tactics or even their slogans.

The protests in 2013, on the contrary, were organised by Nida, a far younger movement comprised of young, progressive-minded Azerbaijanis.

Although several important changes have taken place over the past year — many prominent activists have been released and there have been several cases of mass mobilisation for one reason or another — it is the mass rally on 19 October that has changed the agenda and opened a new page in the country’s political life.

However, has a radical transformation of the political struggle in Azerbaijan happened? No, not yet. But the possibility for such a transformation has finally appeared.

For it to happen, Azerbaijan’s traditional opposition parties must connect with and harness the energy and ambitions of the new, progressive youth opposition.

To the brink and back

With their nationalist slogans and militarist rhetoric, traditional opposition parties have done a lot to alienate young progressives. As has their behaviour in general.

A few weeks before 19 October’s protest, Azerbaijani social media was ablaze after Seljan Yaghmur, the daughter of the then–deputy leader of the APFP, accused her father of domestic violence.

She accused her father, Fuad Gahramanli, of physically abusing her and her mother. The accusations shook the reputation of the APFP.

Faced with marginalisation, many members of the party exacerbated the situation with absurd attempts to defend Gahramanli.

Despite these setbacks, the 19 October protest seems to have rescued the party’s reputation, to an extent.

The brutality which the authorities used to apprehend members of the APFP, including party leader Ali Karimli, who was beaten by police, not only returned respect to the party, but also increased Karimli’s authority.

March of the ‘third force’

The organisers of the protest on 19 October have previously put forward both political demands — that is, aimed at changing the political order — and social demands — demands within the existing political system — but at the rally itself, primarily social slogans were voiced.

These social slogans clearly reflected the economic demands of the participants themselves: higher pensions, more jobs, and the introduction of social security.

The next day, on 20 October, a second protest took place, organised in response to reports of that 12 women had been murdered by their domestic partners in a week. Feminists and progressive youth took to the central street of Baku to speak out against domestic violence and femicide.

In the case of both protests, the authorities responded with severe repression, despite these protests not directly challenging them. The irrationality of such repression is not a sign of strength from the authorities. What has been seen time and time again, most notably in the Arab Spring, is that such repression only engenders further social discontent.

[Read on OC Media: Anti–domestic violence march goes ahead in Baku despite attempts by police to disperse it]

The above represent two different types of protest — though they have one commonality, both tackle social questions and both are devoid of political demands insofar as they do not aim at ‘changing power’. The first one can be called a ‘popular protest’, while the second can be called a ‘protest of the progressive youth’.

In reality, in a country where politics has become a marginal arena, protest can, for now, only be social in nature. Neither the 2013 protests nor the massive anger and frustration at the beginning of 2019 about the hunger strike of blogger Mehman Huseynov were of a political nature.

Formal politics is an arena that has been seized by the state and is thus illegitimate in the eyes of the majority of the population.

The protest of the progressive youth is a small force on the public stage. It is a force that has until now felt alienated from the traditional opposition. Far from the nationalist slogans of the opposition and the desire for militarisation, these progressively-minded young people, whether they were listeners of techno music or feminists and queer activists, for many years found their niche in cultural and educational discourses. It is only now that they have begun to protest for specific political changes.

Despite their size, they have altered the binary equation that has for so long dominated Azerbaijan.

The equation as it was before is as follows: On the one hand, there is a hegemonic and authoritarian discourse of power that rejects any political alternative and struggle as such; on the other, the opposition discourses of parties that either have a pronounced nationalist tone with a bias towards trying to politicise the public through basic economic demands, or are aimed at a political victory in dysfunctional and authoritarian electoral system.

The march of feminists on 8 March and the protest on 20 October in central Baku against violence against women, organised by the protesting feminist community, proves that progressive forces are capable of holding their own protests, not associated with any established political force in the country.

The presence of a protest-minded ‘third force’ gives a working counter-example of how oppositional politics can operate in the coming years.

With intellectual and creative resources and good representation in the Internet media, their appearance gives hope that the stagnant nature of political struggle will change. New topics can be challenged, a wider public addressed, closed-minded binaries opened, and old out-dated methods (electoralism) jettisoned.

The onus is now on the traditional, party opposition to connect with this new protest movement and to learn from it. If it succeeds, then there is a chance to transform Azerbaijan’s disunited but socially discontented masses into subjects of democratic struggle and systemic change.