Here is a summary of the latest developments:

Read the updates from 18 March here.

That’s it for today’s updates, but join us tomorrow for the latest on the coronavirus crisis in the Caucasus.

Several cases of people being forcefully quarantined by the authorities have been reported by local media. Several patients had reportedly refused to voluntarily self-isolate after returning from abroad.

Armenia’s Health Minister Arsen Torosyan has announced on Facebook that there are another eight confirmed cases of the coronavirus in the country. All eight were already quarantined.

This morning, speaker of Azerbaijani Parliament Sahiba Gafarova announced that parliamentary committee and commission sessions would be suspended.

Entry to the Azerbaijani capital Baku, the neighbouring city of Sumgait, and Absheron District will be prohibited from 19 March until 29 March, the Operational Headquarters under the Cabinet of Ministers has announced.

Vehicles registered in other regions of Azerbaijan and their passengers will not be allowed to enter, except for ambulances, emergency recovery vehicles, rescue services, and freight.

Passenger vehicles including buses, minibuses, and taxis registered in Baku, Sumgait and Absheron will also be prohibited from transporting people from other regions of Azerbaijan into the area.

All railway passenger traffic and internal flights from the regions to these destinations will also be suspended.

Travel between these three administrative areas will still be possible, however, the government urged people not to do so unless absolutely necessary.

The government said that ‘appropriate legal measures’ would be taken against anyone violating the new rules.

Tbilisi City Hall has announced that from tomorrow, the cable car connecting Tbilisi's Rike Park with the Narikala Fortress will stop functioning until further notice.

The city hall also announced that bus conductors would not be working from tomorrow, but would continue to receive their salaries.

Tbilisi Mayor Kakha Kaladze has confirmed that the ban on minibuses will include buses travelling between towns and cities.

Other measures announced on Tuesday include the closure of all gyms and spas.

Total number of confirmed cases rises to 64 in Armenia

Twelve more cases have been confirmed in Armenia, bringing the total number of infected to 64.

Georgian bus drivers to be isolated from passengers

More on the minibus ban in Georgia: Tbilisi Mayor Kakha Kaladze has confirmed that the ban will extend across Georgia.

However, a government spokesperson told OC Media they were unclear if this would extend to inter-city minibuses, which are the only form of transport to many towns and villages in the country.

The mayor also said that from 18 March, drivers of larger buses would be isolated from the rest of the bus. People will only be able to enter and exit buses from the back doors in order to avoid contact with the driver.

He reiterated that buses and metro carriages would be disinfected daily.

Daghestanis advised to greet people collectively from a distance

In one hospital in Daghestan, a poster was put up advising people to refuse individual greetings and to instead greet people collectively from a distance. 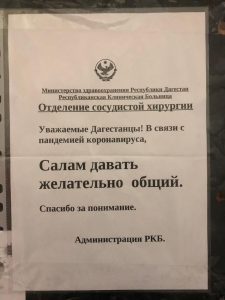 In the Karachay-Circassia, the authorities have banned all events involving more than 50 people since 16 March.

From today on, schools across the republic have closed until further notice.

There are no confirmed cases of infection in Karachay-Circassia as of yet.

The Imam of Karachay-Circassia, Ismail Berdiyev, said that reducing the numbers of Friday prayers in mosques, as recommended by the Spiritual Administration of Muslims of the North Caucasus, was premature for the republic.

General education and pre-school institutions in Ingushetia have been closed since Tuesday according to a decision by the Coronavirus Prevention Headquarters.

The closure is expected to last until the end of March. It is not yet known whether lessons with children will be carried out remotely.

‘In addition to introducing a high-readiness regime, public events and other mass events are prohibited till 1 May 2020, allowing the possibility of holding only extremely important and urgent events’, head of Ingushetia Makhmud-Ali Kalimatov said.

Azerbaijan announced 3 new confirmed cases on Tuesday morning, bringing the total to 28. Six people have recovered and one has died so far.

The three new people diagnosed were placed in hospitals operating under a special regime. According to the Operational Headquarters under the Cabinet of Ministers, they feel normal and their condition is stable.

The Ministry of Culture of Daghestan has announced a ban on cultural events involving over 50 people from 17 March to 10 April.

Theatres cancelled plays today and one law college has switched to distance learning.

The Government of Daghestan together with consumer protection watchdog Rospotrebnadzor are discussing whether to close schools until 28 April, as in the neighbouring North Caucasian republics of Chechnya, North Ossetia, and Ingushetia

Priests in mobile ‘blessmobiles’ were seen driving through Tbilisi’s streets today spraying holy water to take on the coronavirus.

‘We will divide into three groups and go to every neighbourhood to spray this water and ask God to protect this country’, ON.ge quoted Orthodox priest Shalva Kekelidze as saying.

‘You can see how powerless we are against this disease. Thus, the Patriarch has issued a blessing to pray together, to ask God for his help to survive this disease.’

At a plenary session of the Azerbaijani parliament on Tuesday, a new article was added to the Criminal Code for violating the quarantine regime.

The new article outlaws violations of the sanitation, hygiene, and quarantine regime that lead to the spread of a disease or provoke a real threat of this.

If similar actions lead to the death of a person or other ‘serious consequences’, punishments include imprisonment of three to five years.

Georgia to introduce penalties for violating self-isolation and quarantine

He added that stricter measures were needed for violating the rules of self-isolation.

‘The recommendations the government issues should become obligatory to fulfil. We will have a concrete decision tomorrow regarding sanctions and fines in this regard’, said Gakharia.

The speaker of the Georgian Parliament, Archil Talakvadze, said that sanctions were to follow for violating quarantine rules.

‘We need a tough, smart, and professional response to every risk of spreading the infection’, said Talakvadze, adding that these sanctions could include ‘administrative or other measures’.

Georgia currently has 34 confirmed cases of coronavirus infection, 1008 people are quarantined, and 64 are under inpatient treatment.

The Georgian Government has banned minibuses (marshutkas) from operating in the capital Tbilisi.

Prime Minister Giorgi Gakharia announced the decision Tuesday afternoon, which will be enforced from Wednesday.

Larger busses and the Metro will continue to operate and undergo disinfection. There is no word yet if the ban will extend to inter-city minibuses.

Gakharia added that there was no need to announce a state of emergency yet, but that the government would do so in the future if needed.

Kabardino-Balkaria’s state university started distance learning on 16 March. Students and teachers were also asked not to travel to countries where there are already confirmed cases of infection.

There are no confirmed cases yet in Kabardino-Balkaria. However, local residents report that there are no masks or sanitizers in pharmacies.

According to the Minister of Health Arsen Torosyan, the majority of cases have no symptoms, some cases have exhibited high fevers and in rare cases pneumonia (two in Armenia).

On 16 March, the Catholicos of All Armenians Karekin II issued a statement regarding the spread of COVID-19 in Armenia, urging priests and parishioners to be cautious and avoid public gatherings.

Liturgies will be conducted without the people’s participation, wedding ceremonies will not be performed, while baptisms will be performed when necessary. The Catholicos also urged people to avoid organising large funerals (the State of Emergency dictates no more than 20 people).

Armenia has postponed a constitutional referendum scheduled for 5 April on reforming the constitutional court due to the state of emergency declared yesterday.

According to the law, the referendum will take place no sooner than 50 and no later than 65 days later after the emergency situation has been lifted.

One new case confirmed in Georgia

Two new cases was confirmed in Georgia on Tuesday. According to Marina Ezugbaia, the director of the Hospital of Infectious Diseases, the patient came into contact with the three latest patients and their health condition remains serious but stable.

There are now 35 confirmed cases in Georgia in total. One patient has recovered and was discharged on 16 March to self-isolation. No one has died.

Welcome to OC Media’s coronavirus live updates. We will be bringing you the latest news on the pandemic around the Caucasus.

Here is a summary of the latest developments: