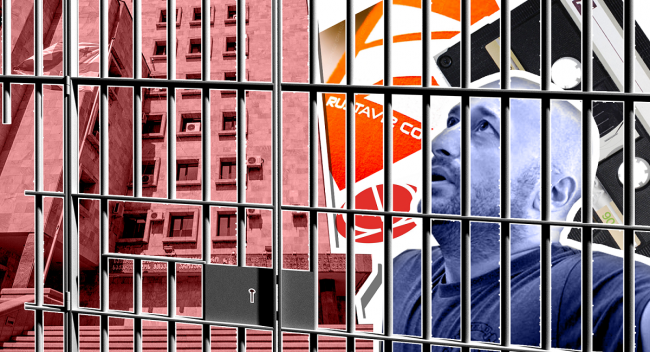 When Georgian Dream swept to power in 2012, they did so on the back of popular anger at the justice and security apparatus under the then ruling United National Movement (UNM).

Outrage over the 2012 prison rape scandal drove tens of thousands of people into the streets — and into the polling stations.

But recent scandals suggest that officials at the highest levels of government may be resorting to the same tried and tested methods of abuse.

Allegations include kidnap and torture by investigators to secure convictions; pressure and coercion on businesses and media; and selective justice; all extremely serious.

These are allegations the authorities have failed to adequately respond to, casting doubts over which direction Georgia is headed in its democratic development.

In them, Subeliani, apparently unhappy over his detention and a deal he made to take the fall for the government, reminds his interlocutor he has ‘terabytes of kompromat’ on leading current and former members of the government.

The main reason Subeliani seems to be upset is the testimonies he and former Tbilisi Prosecutor Mikheil Shakulashvili gave to the parliamentary commission into the investigation.

The commission questioned Subeliani on 22 July in prison, while Shakulashvili was questioned a day later, giving contradictory testimony.

On the tapes released by Rustavi 2 Subeliani allegedly says that ‘somebody’, presumably from the government, failed to come up with the one consistent testimony for both of them to tell the commission.

Subeliani allegedly says on the tape that he was confused during the questioning because no one visited him in prison to tell him what to say, and he is upset that he will be accused for giving the false testimony.

Subeliani also allegedly says he wanted to speed up the trial, and to serve his ‘one-year prison term’ and then be ‘left alone’ of the media focus.

Subeliani’s trial continues, and the commission has suggested he face additional charges.

‘We kidnapped and fucked people up’

Subeliani worked as a prosecutor in Kvemo Kartli during the rule of UNM and was accused by some of prosecuting participants of May 2011 anti-government protests on political grounds.

His appointment in 2013 was controversial.

In the Rustavi 2 tapes he allegedly talks of his role under Georgian Dream’s rule in torturing suspects and pressuring witnesses — especially in the cases of former UNM officials — all on the orders of senior officials. ‘We kidnapped and fucked people up’, he says.

Subeliani allegedly claims to have recorded evidence of his superiors’ complicity in this. ‘What do you think? When they were sitting in meetings giving out shitty orders I was dumb enough not to protect myself from them?’

He then tells Japaridze to remind Interior Minister Giorgi Gakharia of the ‘conditions agreed’ with him.

In the latest recording published by Rustavi 2 on 17 October, Subeliani allegedly speaks of blackmailing former Corrections Ministers Kakha Kakhishvili with an incriminating  wiretapped recording of him in 2013.

In this latest recording too, according to Rustavi 2, Subeliani allegedly claims he had agreed with the authorities to go to prison, but met then Corrections Minister Kakhishvili before his imprisonment and demanded special treatment during his pre-trial detention.

Subeliani allegedly claims the government offered he leave for France with ‘2 million’, but chose to stay. But he allegedly says he sent his phone with the secret recordings compromising the authorities to Germany, to have them authenticated.

Japaridze has not denied that the conversations took place. Instead, Georgian Dream has tried to dismiss the allegations as the rants and ravings of a desperate man under pressure.

But there are flaws in their story that they have not adequately addressed.

It is unclear why were the two key potential witnesses of a scandalous tape aired by the media, which the authorities claim to be investigating, were allowed to meet and talk again in prison the following day.

The Prosecutor’s Office claimed they are also independently investigating the claims heard in tape. However, the authorities did not mention if they were treating Subeliani and Japaridze as witnesses.

It has been reported that the two have met five times throughout the year: on 6 July, 20 July, 10 September, 11 October, and 14 October.

It is suspicious that MP Japaridze, who claims that in July Subeliani told him about his intention to make ‘false’ accusations against the authorities, kept meeting him and did not report or make this public before the scandal broke.

Georgian Dream have offered no explanation whatsoever as to why one of their MPs was discussing such issues with Subeliani in detention at all. Japaridze himself said he did so simply because they were fellow Svans.

Two days later, after Japaridze again visited Subeliani in prison, the Prosecutor’s Office released another tape, also apparently of the two. They claimed the tape was recorded in July.

But the contrasts between the two are clear:

All of the subjects brought up in the original are dismantled one-by-one in a quick-fire fashion that seems a little too convenient.

The original recording is an hour and twenty minutes long, with the two going back and forth alluding to numerous cases.

In the tape released by the Prosecutor’s Office, which is just seven minutes long, Japaridze sounds stilted, speaking as if he were reading from a script.

The tapes conflict with each other, as in the tapes released by the Prosecutor’s Office, Subeliani allegedly claims that he would lie about having ‘kompromat’ against the government, to which Japaridze acts as if he knows nothing about this.

In the Rustavi 2 tapes released two days earlier — three months after the Prosecutor’s Office tape supposedly takes place — it is Japaridze that allegedly brings up the issue of the ‘kompromat’, assuring Subeliani that other, unnamed parties, are aware it is secure in Europe.

In the Rustavi 2 tapes, Subeliani allegedly confidently speaks about owning ‘terabytes’ of ‘kompromat’ which he says he could use in order to ‘fuck over the country’ while in the Prosecutor’s Office tapes he allegedly says he doesn’t but that he could lie about it.

Additionally, in the Prosecutor’s Office tapes, Subeliani allegedly says he was receiving information about ongoing Khorava Street murder protests from Tbilisi’s central Rustaveli Avenue, while the protests ended in early June, about a month prior to when the tape was allegedly recorded.

Commentators online and in the media have been quick to suggest it was staged.

The Prosecutor’s Office did not explain why they informed the public that they had opened an investigation into tapes ‘recorded and obtained by coercion’ only after the tapes damaging them were aired on 14 October.

It is also unclear why the Prosecutor’s Office would release to the public a recording they themselves said is ‘unverified’. These are questions that need answers.

The Omega tapes: demands ‘from Ivanishvili’

In the Omega tapes, the first of which was aired on 10 September, senior government officials, including Georgian Dream Chair Bidzina Ivanishvili, stand accused of extorting money and cars from the head of Georgian conglomerate Omega Group, as well as trying to seize control of Omega-owned TV station Iberia TV.

On 16 October, Iberia TV said they had stopped broadcasting news and political TV shows due to financial pressure over overdue tax payments.

Okuashvili says that when Kipiani tried to verify that the demands really came from Ivanishvili, Kipiani was kidnapped and threatened with rape, something Okuashvili alludes to unchallenged in the recordings.

Okuashvili says he eventually met with Ivanishvili, who demanded ₾4 million ($1.5 million) from him.

He says he handed over the money, withdrawing it from TBC Bank out of the bank’s usual working hours, with now Interior Minister Giorgi Gakharia ensuring TBC allowed this to happen.

Much of the story has been confirmed. Kipiani admits he was present when the cash was withdrawn and handed over to armed men, a transaction caught on camera, but says he does not know what happened to it afterwards.

Ivanishvili confirmed the meeting with Okuashvili took place, but insisted he was simply offering ‘business advice’.

While both participants of the conversations confirmed they took place, the Prosecutor’s Office announced the recordings were doctored.

The tapes in which Kipiani delivers demands to Okuashvili, according to Kipiani, were staged for the benefit of Omega Group’s foreign partners, to convince them the company was under pressure and cut it some slack.

Okuashvili responded to this rather outlandish story the same day, stating that Omega Group did not have any debts with its partners.

Since then, the authorities have not provided public with any updates about the investigation.

In each of these cases, the official stories have left many holes and contradictions.

Rather than fully addressing allegations and outlining a clear and logical series of events, officials from Georgian Dream have often resorted to shooting the messenger.

They have lashed out at the country’s leading NGOs for raising these issues. They have continued to label media reports raising the issue politically biased.

On 17 October, Rustavi 2 director Nika Gvaramia announced that the State Security Service was planning to release recordings of conversations between him and former President Mikheil Saakashvili, in an effort to discredit Rustavi 2.

Also on 17 October, the Prosecutor’s Office announced they were charging four former UNM officials with planning the murder of tycoon Badri Patarkatsishvili, based on recordings obtained in 2016.

The timing of these, and the fact it involved alleged misdeeds by the previous government, seem an obvious attempt at deflection over the allegations they themselves are facing, rather than face them head on.

If the government fails to adequately explain and investigate what has happened in each of theses scandals, and to hold accountable anyone found to have been involved in abuse — no matter who they are — suspicions will remain that the dirty politics of the past is here to stay.