As Easter celebrations approach in Georgia, a study by CRRC Georgia suggests that a large number of Georgia’s Orthodox Christians still intend to celebrate at Church. The survey of Facebook users found that around 40% of people who usually celebrate Easter in Church intended to do so again this year despite the pandemic.

With Easter celebrations approaching, quarantine rules have become even stricter: driving of private cars has been forbidden and movement in and out of the four largest cities of Georgia has been restricted.

While most organisations are closed or are working digitally, the Georgian Orthodox Church has continued traditional services. Moreover, the church has refused to call on believers to celebrate Easter at home, and the government seems unwilling to enforce emergency rules on the Church.

This is not the first time government officials have used subtle suggestions, or nudges, with the goal of altering people’s church-going habits.

‘I would like to address Christian believers. Let’s protect our mother-Church, and our priests, by praying at home and not going to church.’

While such nudges often succeed in changing people’s attitudes and even behaviours, CRRC Georgia’s research shows that in the current situation, this approach may not be working.

The tool disseminates two or more announcements which will randomly show up in Facebook users’ news feeds. In this case, Facebook users were randomly shown advertisements to fill out one of the two versions of a questionnaire: one included Imnadze’s statement as an introduction to the survey, while the other did not. The two surveys were identical in every other respect.

Of the 7,560 adults, 42% read or saw Imnadze’s statement before filling out the questionnaire. Analysis of the results did not show any impact from the nudge.

Yet the nudge played no role: regardless of being in the treatment or control group, about 60% of respondents who usually would celebrate Easter in Church reported they would stay home this year, while about 40% still planned to go to church.

Importantly, there was no effect of the nudge across different demographic groups (e.g. men and women, older and younger people). 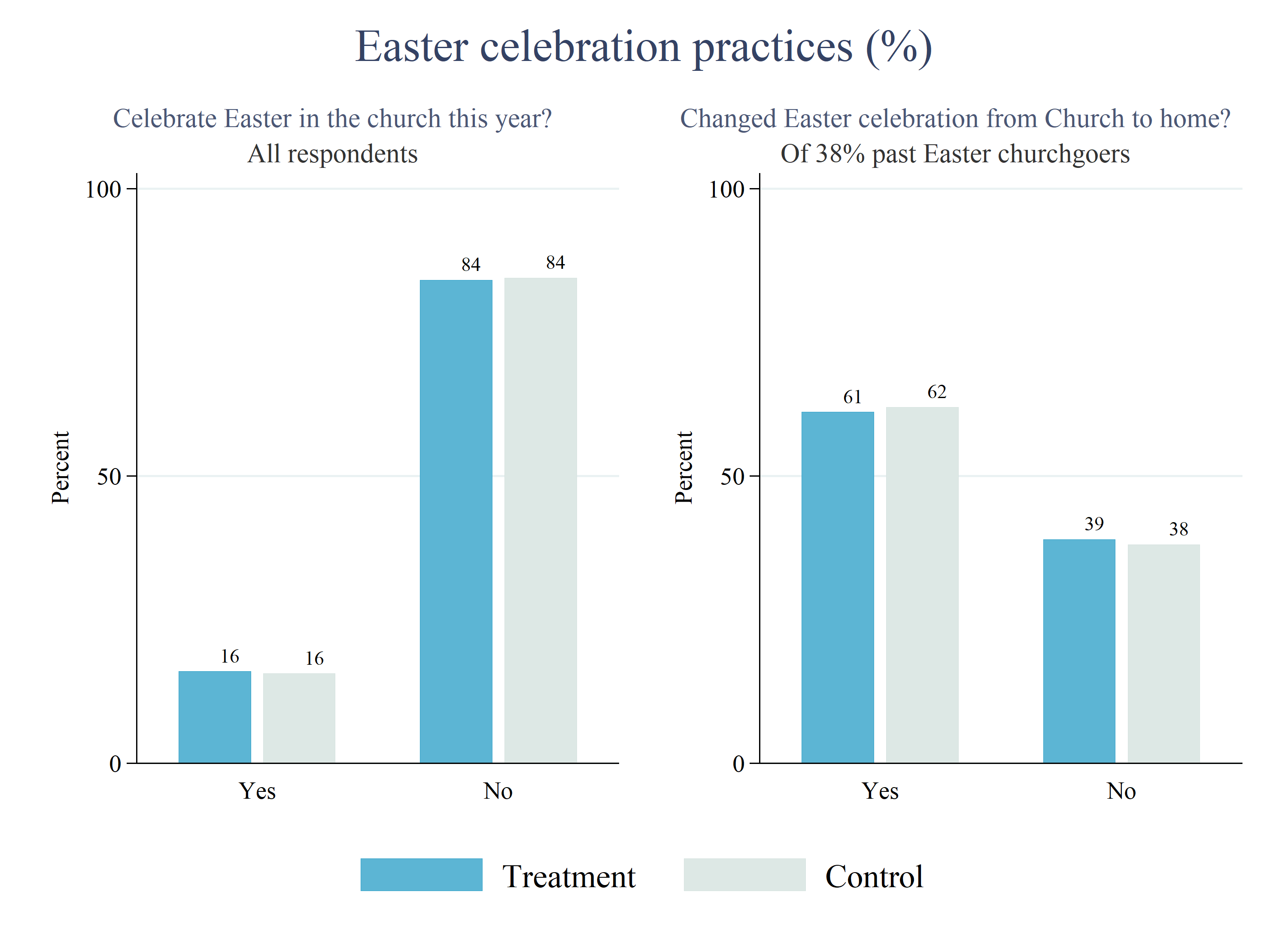 Further analysis looked at different factors that correlate with whether people changed their choice to celebrate Easter at the Church.

Respondents’ religiosity shows an unsurprising pattern. Frequent churchgoers and respondents who consider religion important in their lives were more likely to stay loyal to their past practise of celebrating Easter in the church than less religious respondents (i.e. those who go to church less frequently and consider religion less important).

Women, people with tertiary education, and older respondents are also more likely to move Easter celebrations from church to home, whereas employed respondents are less likely to change their past practice of celebrating in the church. 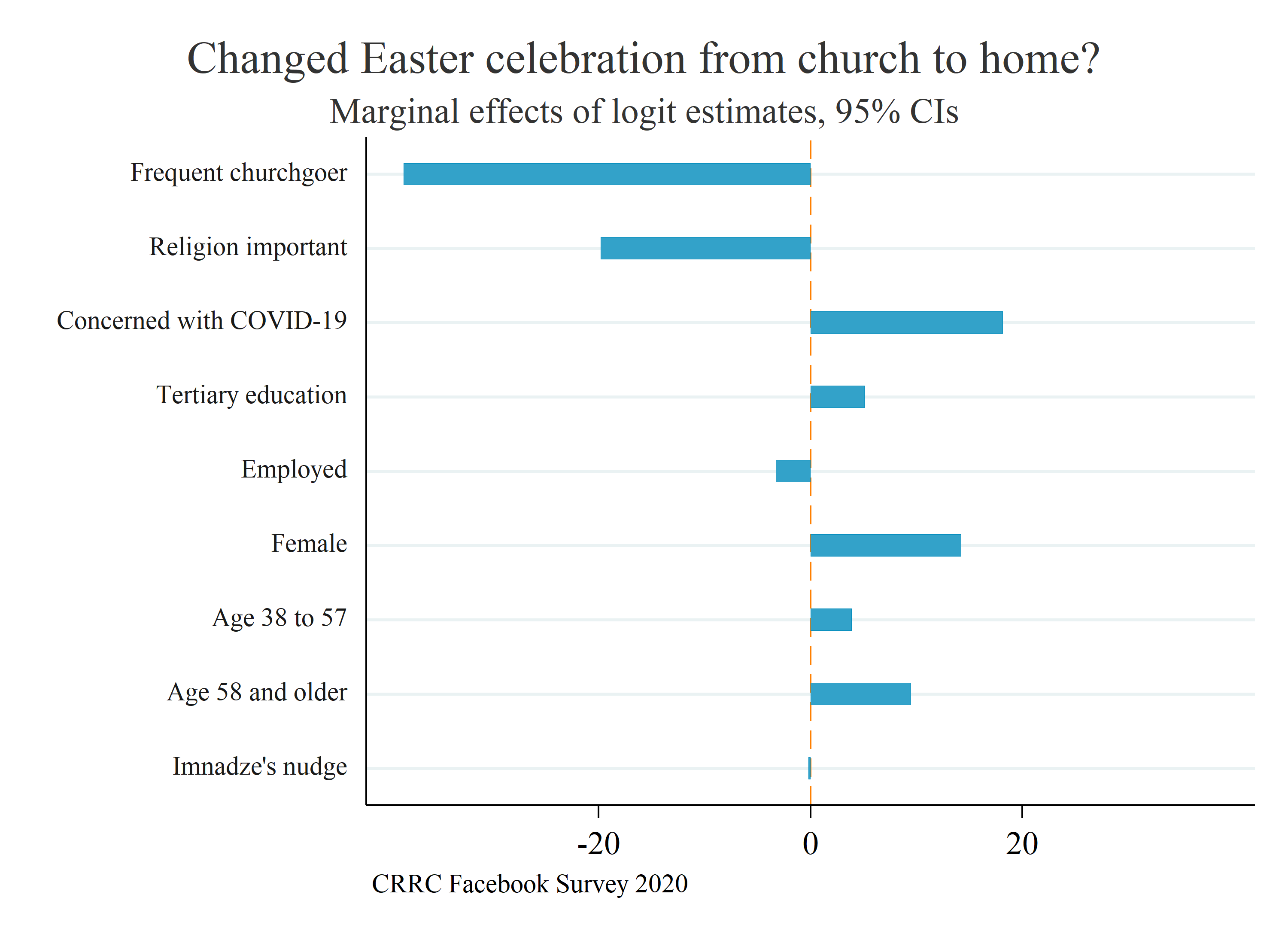 While the survey gathered a large number of responses, the results should be read with caution.

The survey is clearly not representative of the population of Georgia, which is reflected in a different demographic profile of the Facebook respondents.

Unlike nationally representative surveys, the Facebook sample overrepresented women (82%), the employed (61%), the university-educated (65%), and younger people (the average age was 37). Moreover, it is hard to say whether the survey represents Facebook users in Georgia, since respondents self-selected into the survey.

Nevertheless, the group that saw and did not see Imnadze’s message on the survey were very similar, with identical demographic profiles. Hence, if the treatment and control groups answered the Easter celebration question differently, this could be attributed to the reminder of Imnadze’s nudge.

While it is not possible to exclude the possibility that the tested and similar nudges already impacted the respondents before they completed the Facebook survey, the findings still suggest that subtle suggestions are not sufficient to change people’s Easter holiday plans.

While a significant share of respondents changed their usual ways of celebration, a reminder of Imnadze’s suggestion did not change this.

Religiosity seems to be an obstacle towards adaptation to the current situation: while many believers and frequent churchgoers reported they would celebrate from home, many are still unconvinced and will likely help spread the virus this Sunday unless emergency rules are enforced on the Church as elsewhere in the country.