Despite initial praise as a model case of handling the pandemic, Georgia is now seeing record numbers of COVID-19 cases and related deaths. Both health and economic data now suggests that the country has not fared well compared to its neighbours.

In early August 2021, Georgia was among the worst countries in the world in terms of COVID-19 case counts and deaths. Indeed, over the last week, over 1% of the adult population had COVID-19 at the same time.

At the start of the pandemic, headlines in international media praised Georgia as a, ‘Coronavirus success story’, and officials declared that they had ‘managed to stand ready to cope with the virus’. However, circumstances took a turn for the worse in the late autumn and the situation has not been assuring since.

Despite the quickly deteriorating situation, government officials have been resistant to introducing measures aimed at preventing the spread of the virus. In July, public health officials said that their decisions and methods of tackling the pandemic had been successful. Moreover, polling from June 2021 suggests that 60% of the population is very satisfied (13%) or somewhat satisfied (47%) with the government’s response to COVID-19.

But official health and economic data suggest Georgia has fared poorly compared to its neighbours, with the potential exception of performance on testing. 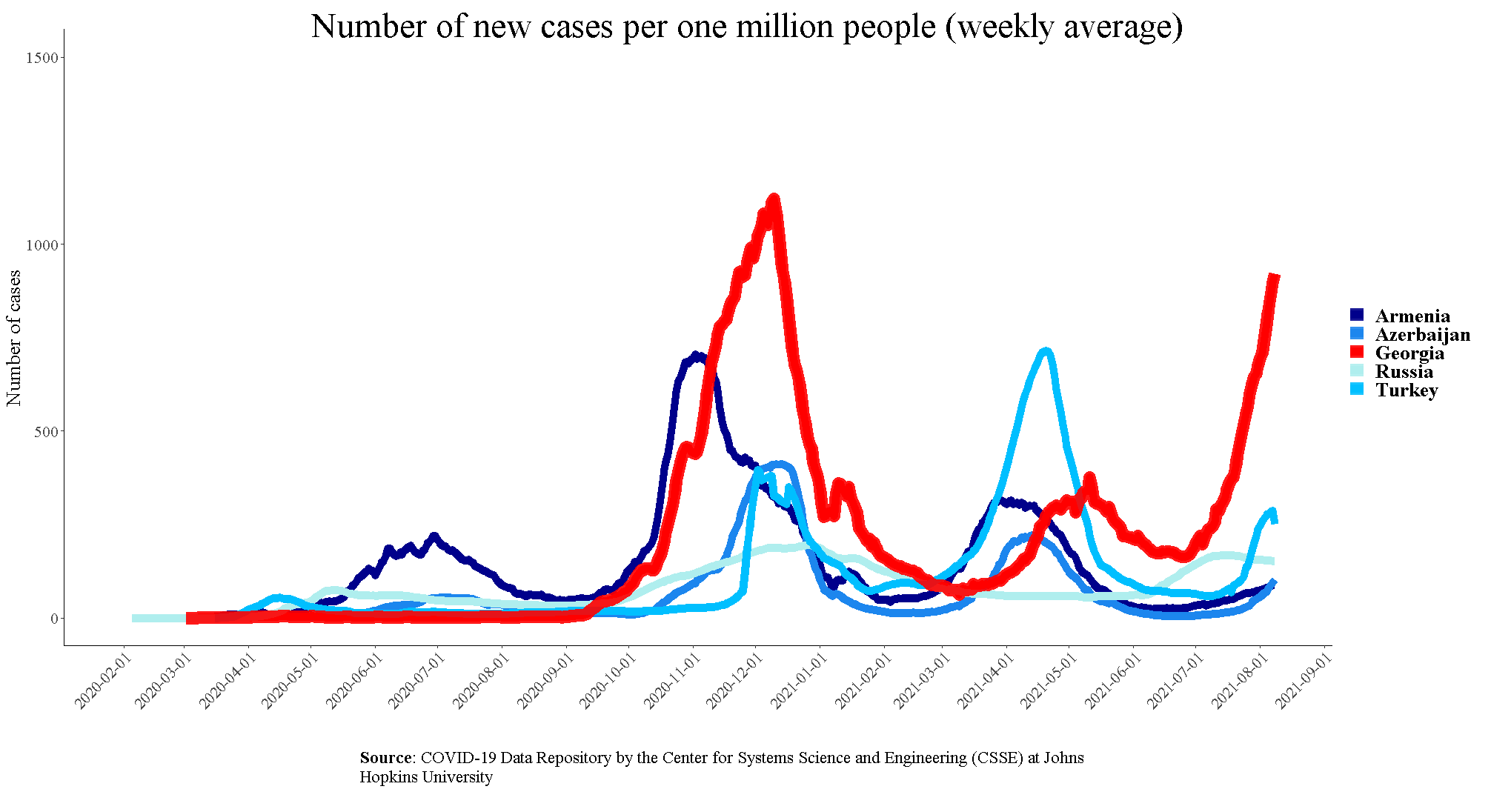 COVID-related deaths probably are the single most important indicator of how the country has handled the crisis. Georgia’s cumulative COVID-19 deaths per capita are the second-worst in the region, following Armenia. 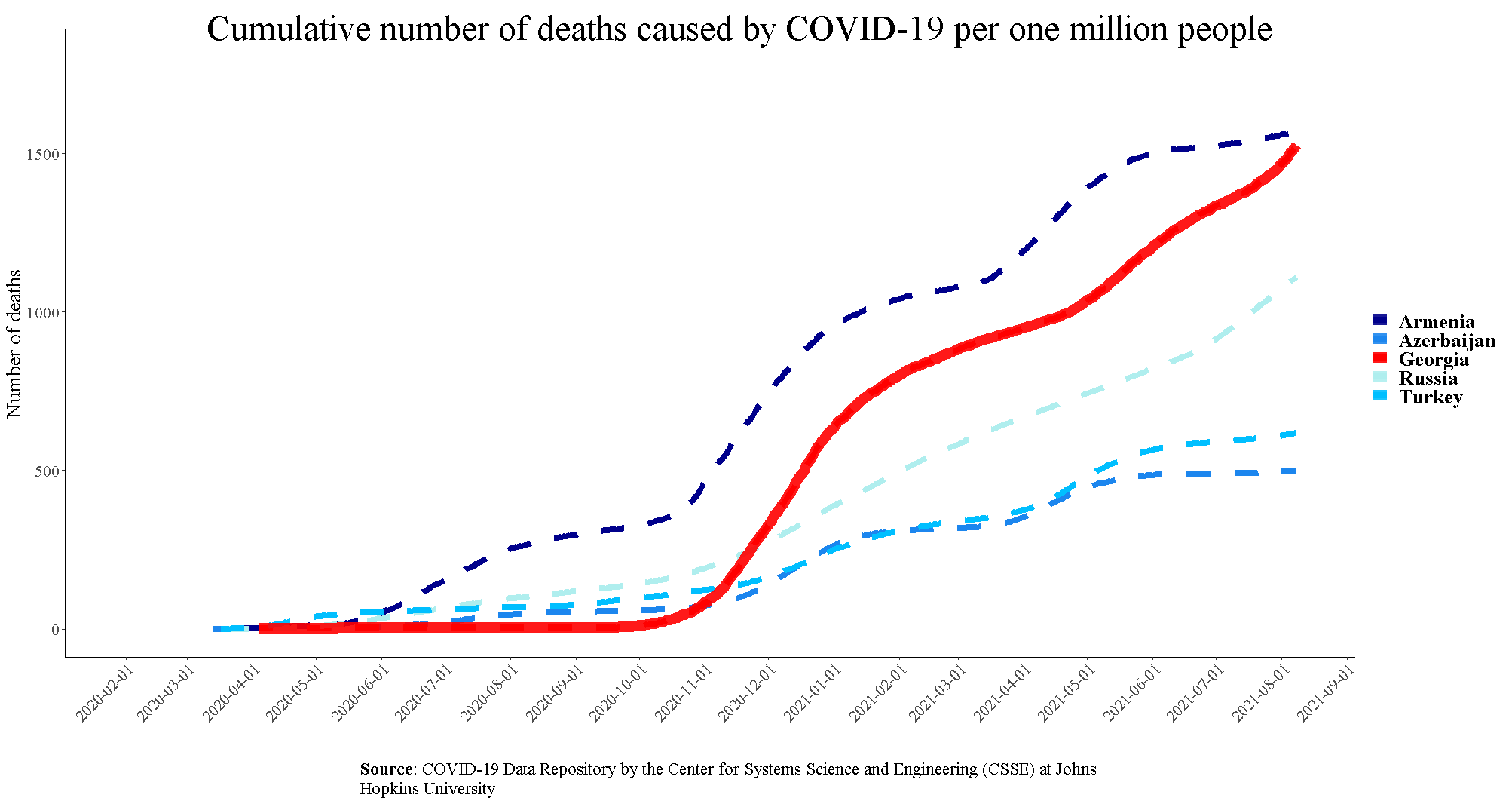 Since late autumn 2020, Georgia has consistently fared the worst among its neighbours in COVID-19 deaths per capita. The exceptions in this regard are in the late spring of 2021 and a couple of weeks in July. 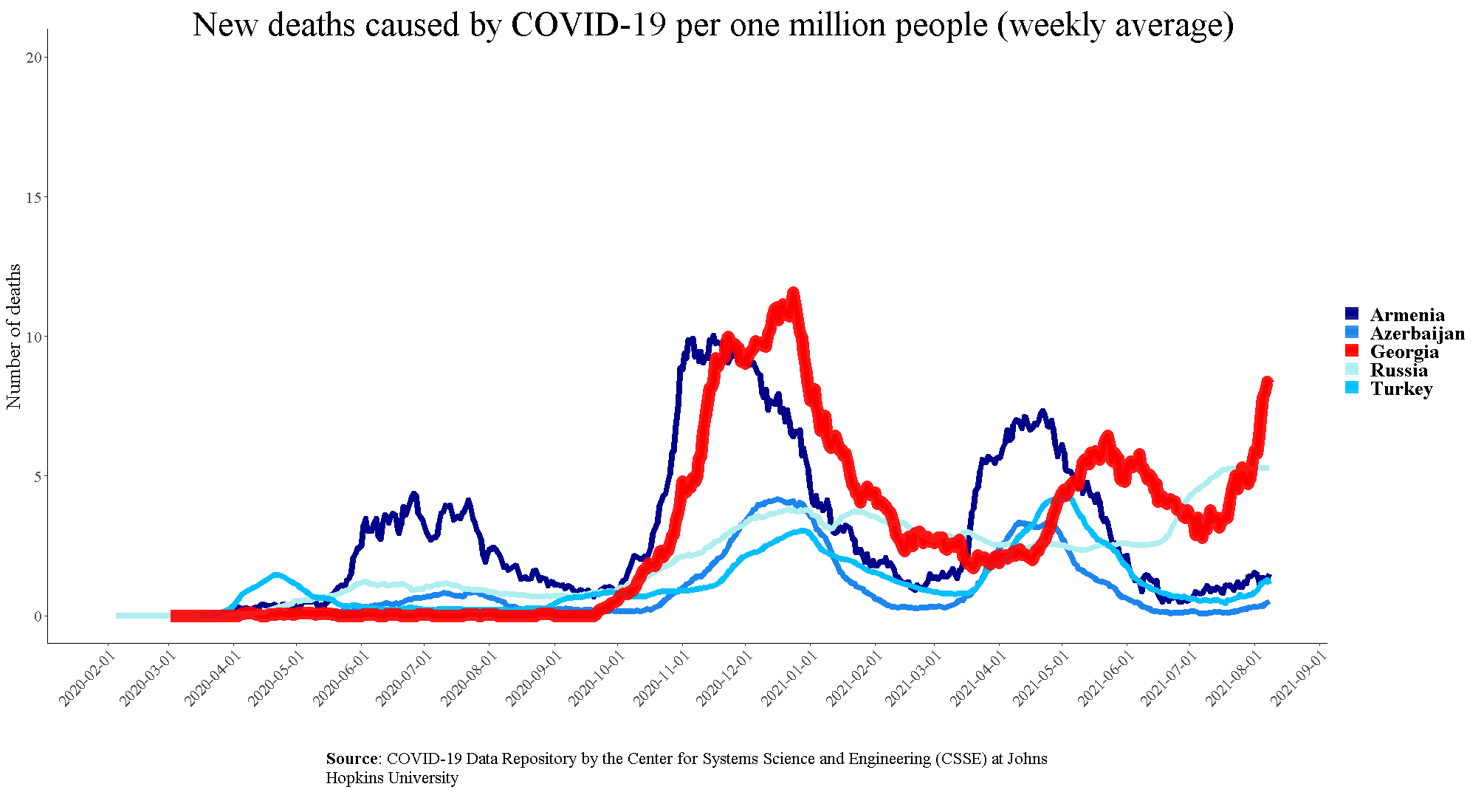 Georgia also lags behind its neighbours when it comes to vaccination, with only Armenia further behind.

While Georgia tends to lag behind its neighbours on many pandemic related indicators, Georgia is outperforming them on testing and tracking the virus in general. As of 9 August, 1,955 tests per thousand people have been conducted in Georgia since the beginning of the pandemic.

The figure is significantly lower in neighbouring countries, especially in Armenia and Azerbaijan. However, this data might be misleading because Georgian officials decided to add antigen tests to the test count in December 2020, while Azerbaijan, Russia, and Turkey report only PCR tests (see here).

Moreover, Georgia registered the lowest number of excess deaths throughout 2020.

However, data is not available for 2021 and hence, cannot portray the full picture.

Considering that in August 2021 Georgia tops the neighbourhood in terms of new cases as well as new deaths, it is likely that excess mortality figures have substantially deteriorated as of summer 2021.

The fact that Armenia and Azerbaijan engaged in military conflict in autumn 2020 further complicates the task of drawing unequivocal conclusions regarding the countries’ efforts to track the virus. 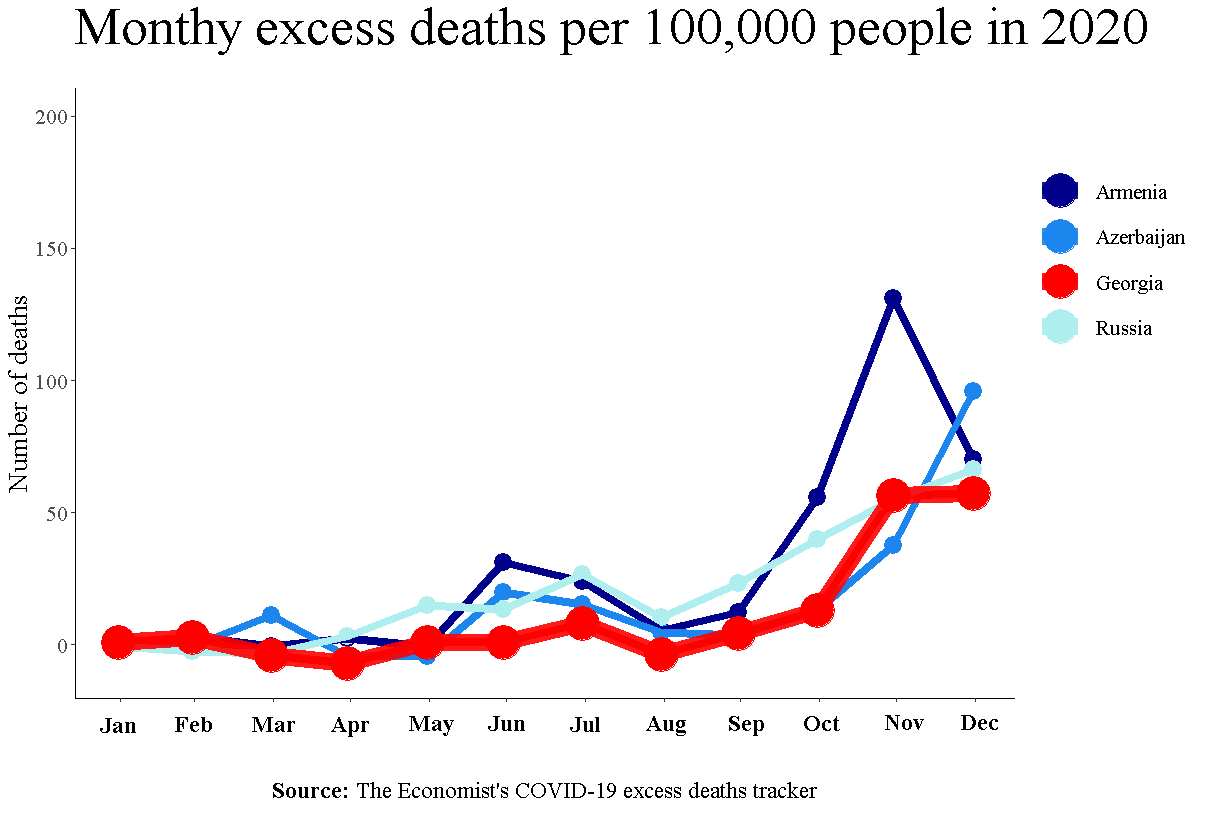 The economy of Georgia has also suffered. According to data from the World Bank and International Monetary Fund, Georgia had the second-highest inflation rate, the second-worst recession, and Georgia’s debt to GDP ratio is the second-largest in the neighbourhood. 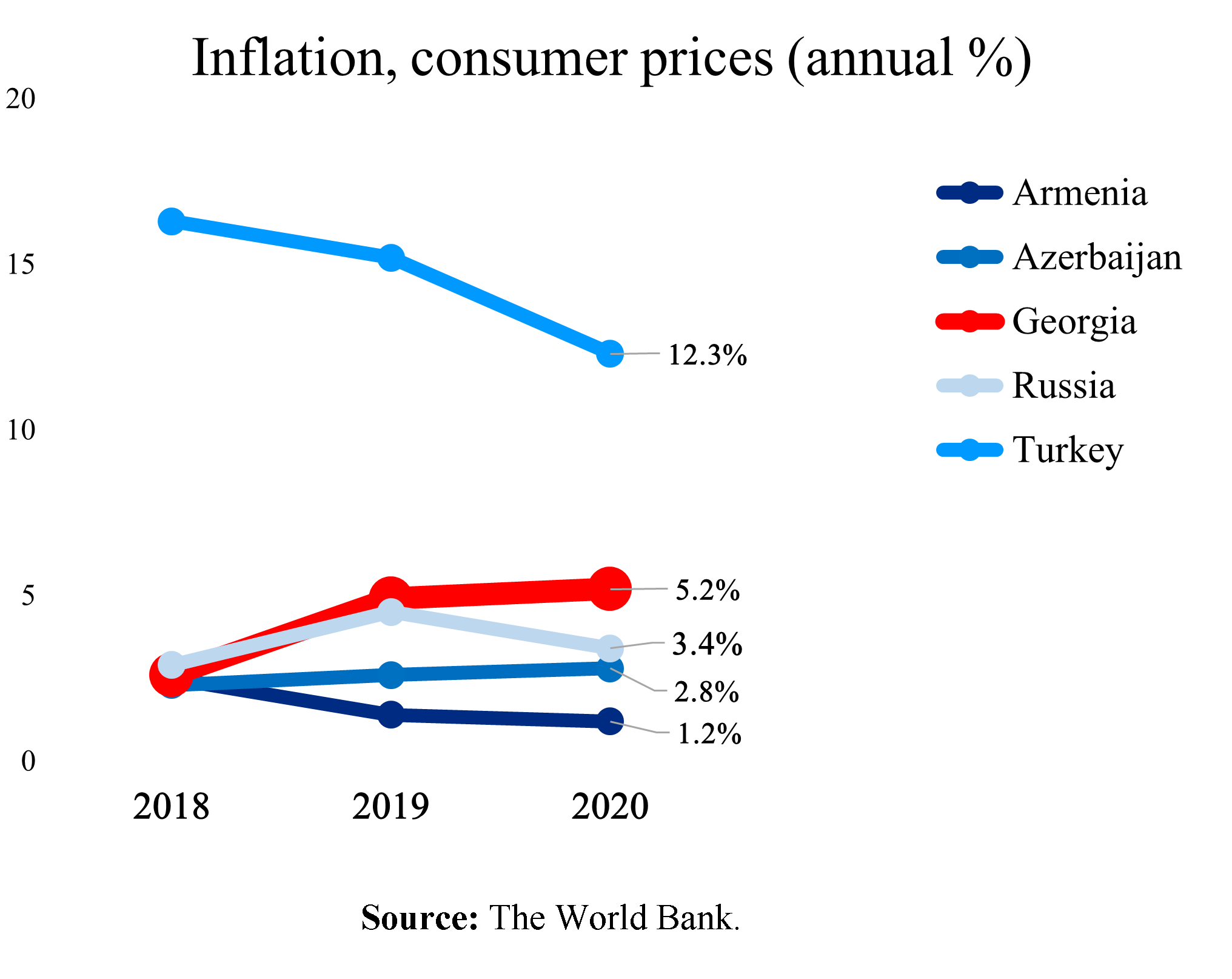 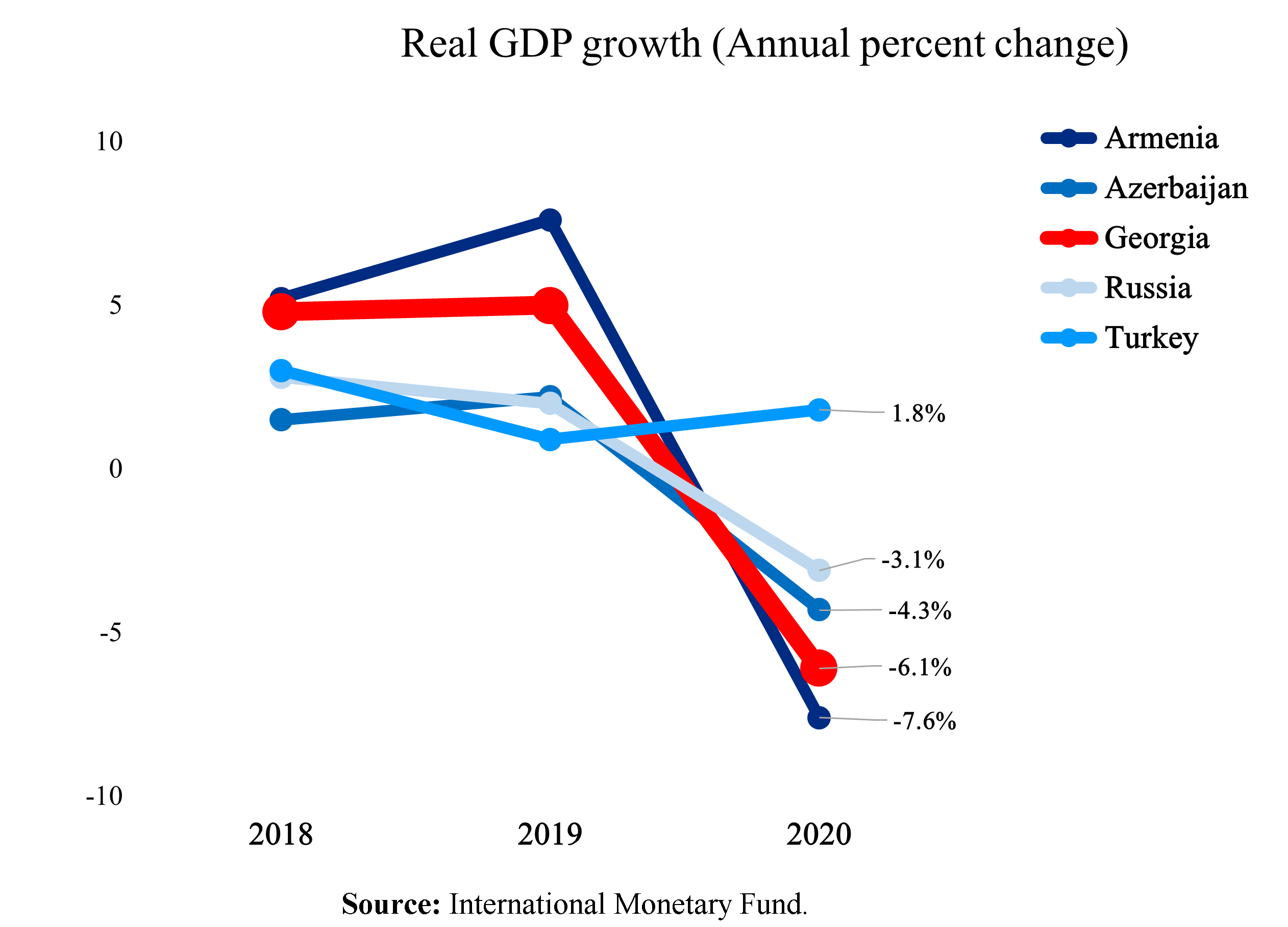 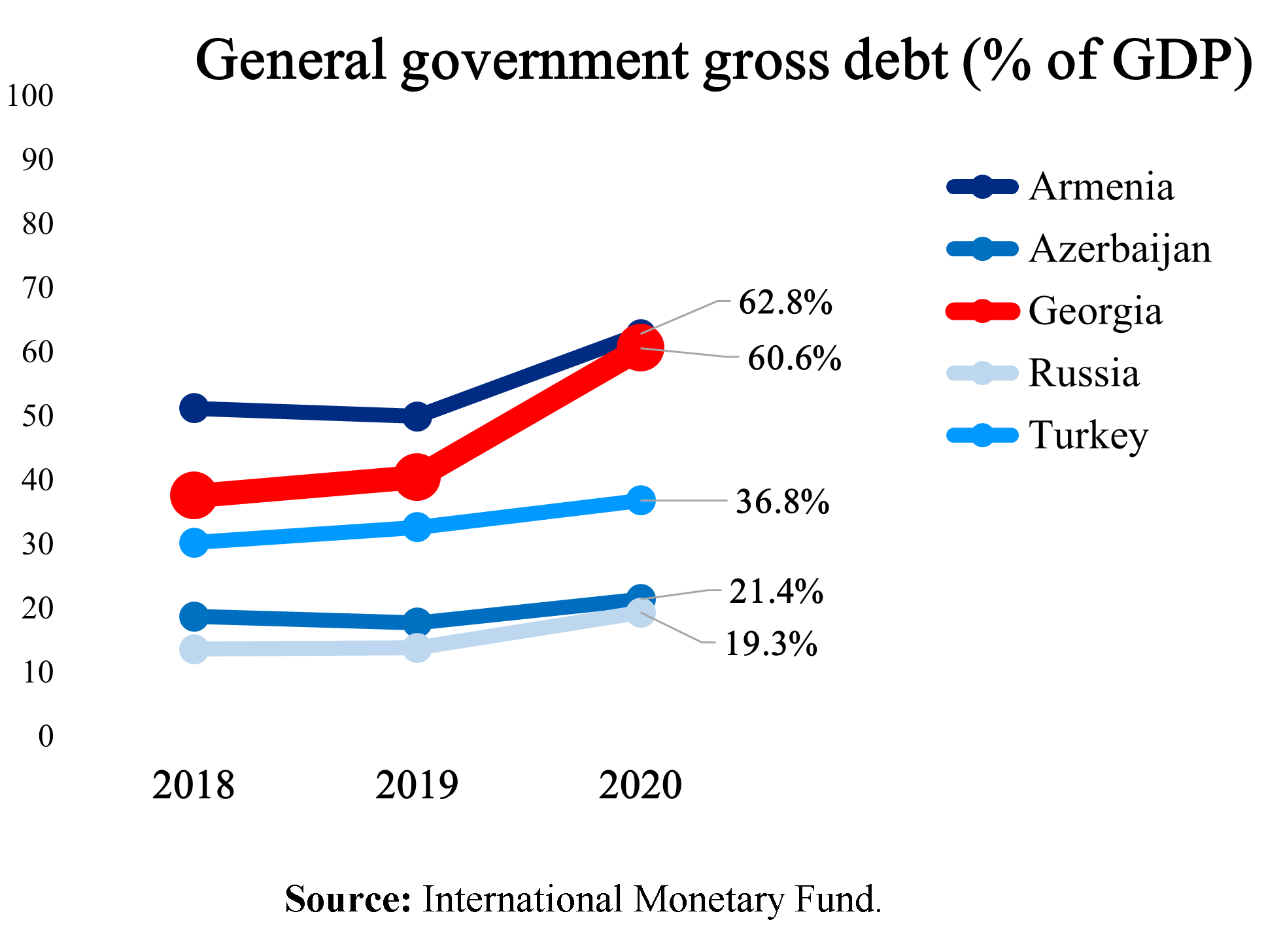 Official data suggests Georgia has not done well in comparison to its neighbours in terms of managing the epidemic, with the exception of testing and tracking the virus, at least in 2020.

Despite the initial success in containing the virus, since autumn 2020 Georgia has been the worst-hit country in the neighbourhood.

That Georgia lags behind in terms of vaccination is perhaps the most concerning part of this. Vaccination is considered to be the only way to substantively reduce hospitalisation and fatality rates.

Had the economic figures looked encouraging, one could have argued that the country prioritised minimising economic hardship. Yet, if that was the case, the country failed, with the second-highest inflation rate and the second-worst economic recession in the region. What is more, among its neighbours, only Armenia has a larger debt ratio to its economy than Georgia.

The views expressed in this article are those of the author’s alone and do not in any way reflect the views of CRRC Georgia, or any related entity.