A recent survey suggests that Georgians tend to believe that poverty, crime, and corruption have increased in the last decade, while affordable healthcare has become more accessible. However, available public data does not always match these assessments.

Recent public opinion surveys suggest that Georgians feel increasingly worried about where the country is headed. As of August 2022, less than a quarter of the electorate believed that Georgia was going in ‘the right direction’.

While the overarching assessment is quite negative, the public’s views on specific issues is more variable, adding nuance to the picture.

The August 2022 CRRC/NDI survey asked respondents how they thought things had changed over the last decade in Georgia, in nine key policy areas. According to the data, at least half of the public think poverty, crime, and territorial integrity have worsened over the last decade.  In contrast, the public was most positive about progress in terms of affordable health care and freedom of speech, with roughly a third of the public believing the situation had improved for both issues.

While two thirds of the public think that poverty has worsened, World Bank data suggests that poverty in Georgia has declined over the past decades. Although there are ups and downs in the data over the years, there has been a decline in the share of Georgians living on under $6.85 (converted into purchasing power parity) a day, from 66% in 2012 to 58% in 2020. The percentage of Georgians living in poverty did, however, increase in 2020, likely in response to the pandemic. A similar trend is present for the $2.15 poverty line (converted into purchasing power parity), with declines from 11% to 6%. 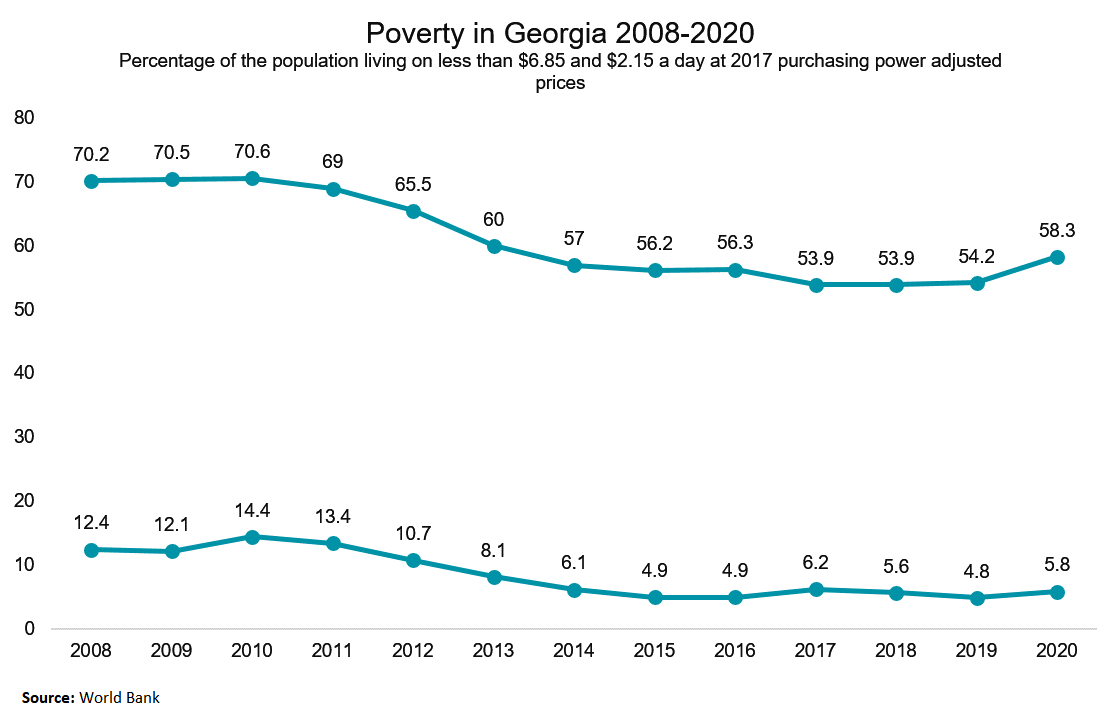 Roughly three in five Georgians (57%) believe that crime has worsened over the last decade. Official statistics seem to confirm people’s negative views, with Georgia registering 56,300 crimes in 2021, compared to less than 40,000 ten years prior. However, in 2018 the Ministry of Internal Affairs changed its crime recording methodology in a way that meant that a greater range of crimes were recorded. As a result, it is not possible to unequivocally claim that crime has substantially increased over the last 10 years. 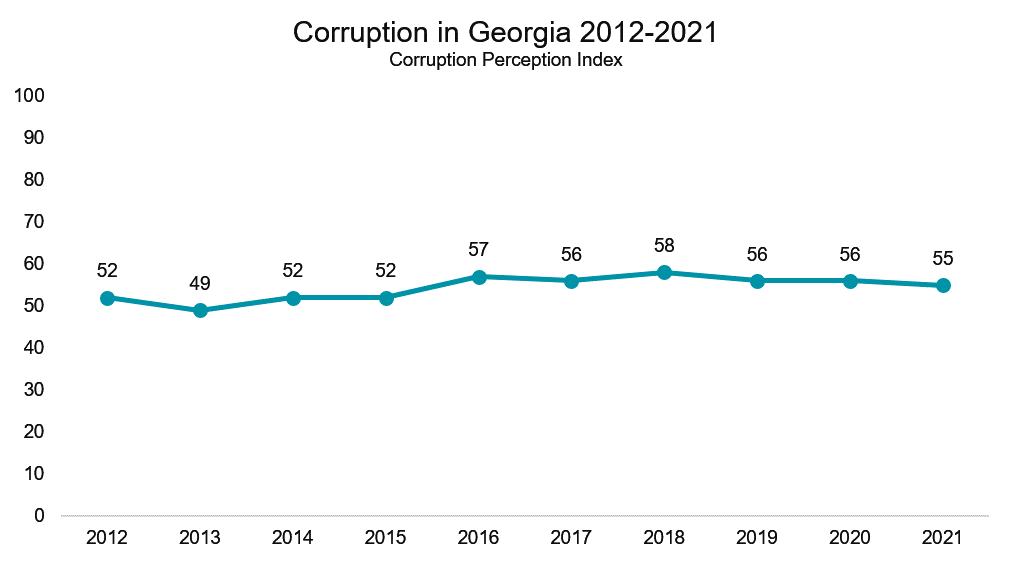 With regards to education, 40% of the public feel it has worsened. But data from the Programme for International Student Assessment (PISA), a study intended to evaluate national education systems, suggests that Georgia has slightly improved its scores in the last decade, albeit with a slight decline since 2015.

Some of the most positive public assessments were for affordable healthcare. About a third of the public (36%) believe that the situation around affordable healthcare has improved in the last decade. Data from the World Health Organisation appears to corroborate this, as it suggests that domestic private health expenditure in Georgia has declined as a share of total health expenditure from 77% to 59% of spending. However, it must also be noted that lesser private and greater public expenditure is no guarantee of better quality health care services. 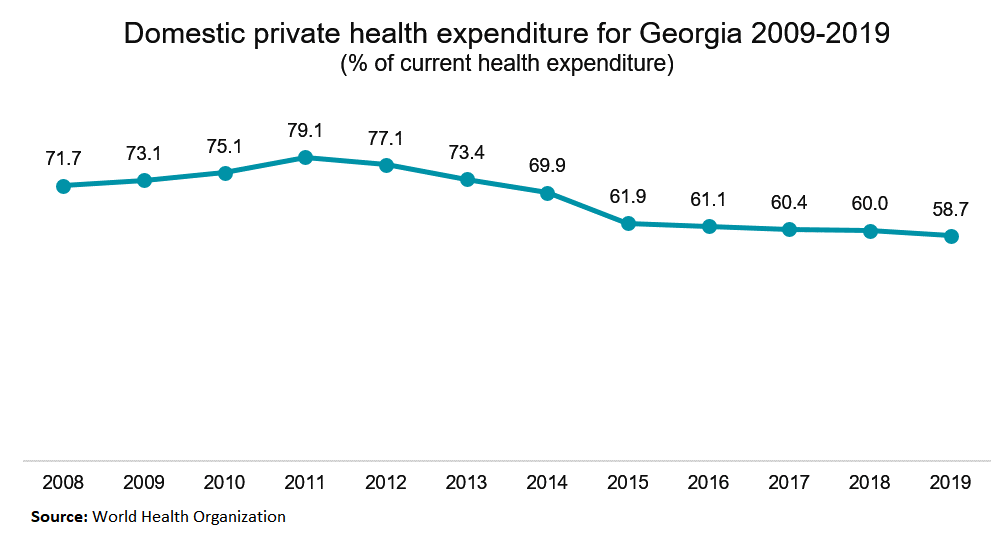 In terms of freedom of speech, a third of Georgians believe that it has improved over the last ten years. Data from the Varieties of Democracy project suggest that Georgia’s scores did improve in 2012-2013, but have declined since 2016. 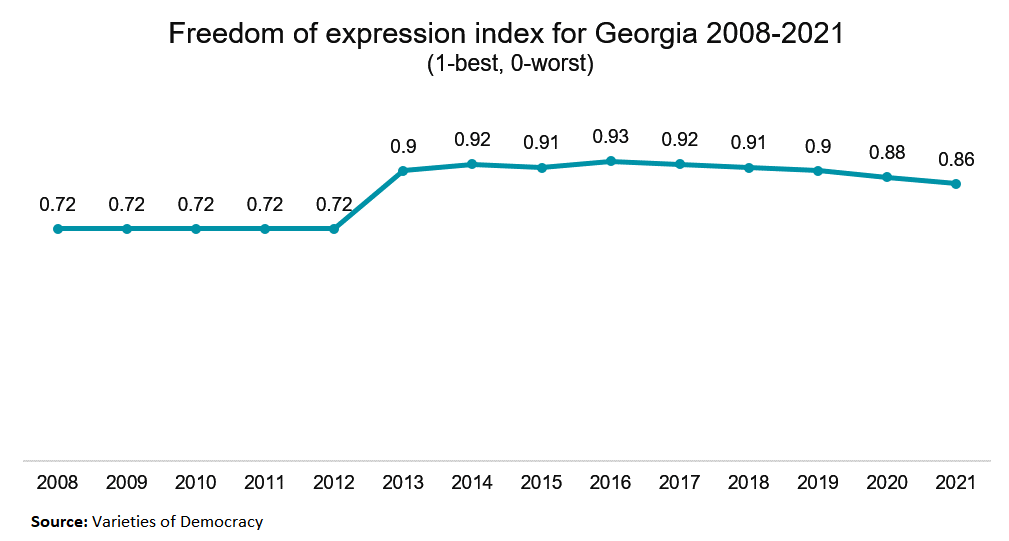 As for the court system, roughly one in three people (31%) think it has worsened over the last decade, but the Varieties of Democracy project suggests that Georgia’s score on the rule of law index has not changed since 2008. 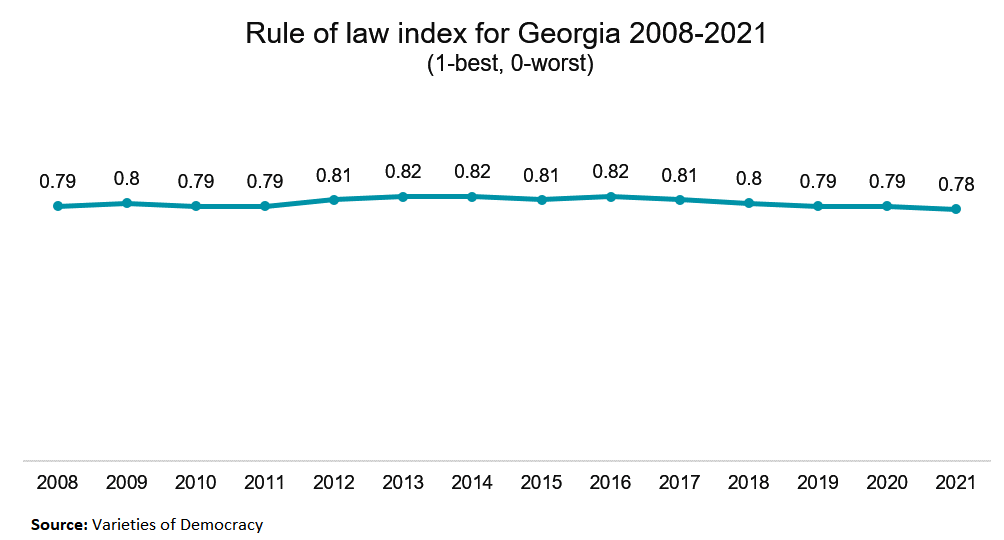 The public tends to think that the situation in Georgia in terms of poverty, crime, and territorial integrity has worsened over the last decade, while feeling most positive about freedom of speech and access to affordable healthcare. However, these sentiments are not reliably supported by publicly available data on the issues.