Political campaigning takes a wide range of forms, from digital advertising to door knocking. Generally, campaigning is believed to both mobilise voters to actually go out to vote as well as win over voters, but which is most relevant in Georgia?

Data from the August CRRC Georgia and NDI public opinion poll indicate that people who wanted to be contacted by campaigners also appeared more partisan than others. This may suggest that campaigning in Georgia will be more effective at turning out partisans than persuading the undecided.

The data also indicates that despite the pandemic, most of the voters that wanted to be contacted wanted that contact to be in person.

Respondents on the August 2020 survey were asked what the best way would be for parties to get in touch with them. The most common responses were contact through small scale public meetings close to home and large scale meetings. Approximately a third of the public (31%) did not want to be contacted. 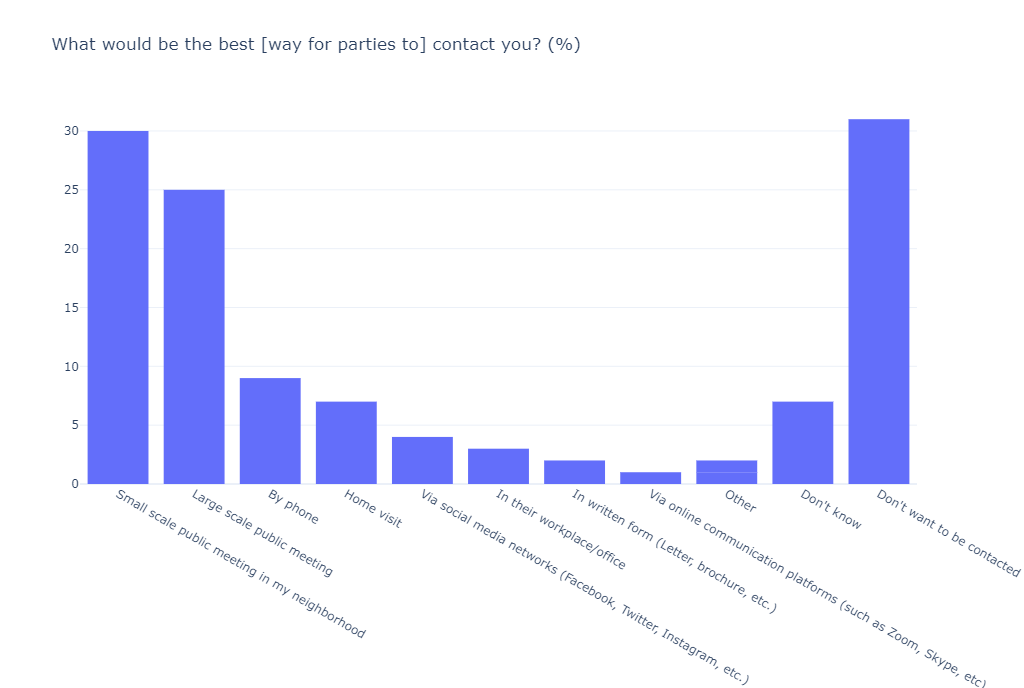 If voters want to be contacted, they may reasonably want more information about their different choices at the ballot box. Alternatively, they may want the parties to excite them (and others) to go to the polls. The data indicates that turning out supporters is likely easier in Georgian elections than winning over undecided voters, because the less partisan voters were, the less likely they were to want contact.

A regression model suggests people in urban areas outside Tbilisi were eight percentage points more likely to be interested in being contacted. Men and women, people in wealthier and poorer households, those in different age groups, and those working and not did not report significantly different rates at which they would like to be contacted.

Regressions using political preferences suggest that partisans and those actively engaged in politics wanted to be contacted at greater rates than less engaged individuals.

With regard to party, the data indicate that UNM and Georgian Dream supporters were more likely to want to be contacted than supporters of other parties and those that support no party in particular.

Likely voters were substantially (31 percentage points) more likely to want to be contacted than those who did not intend to vote. 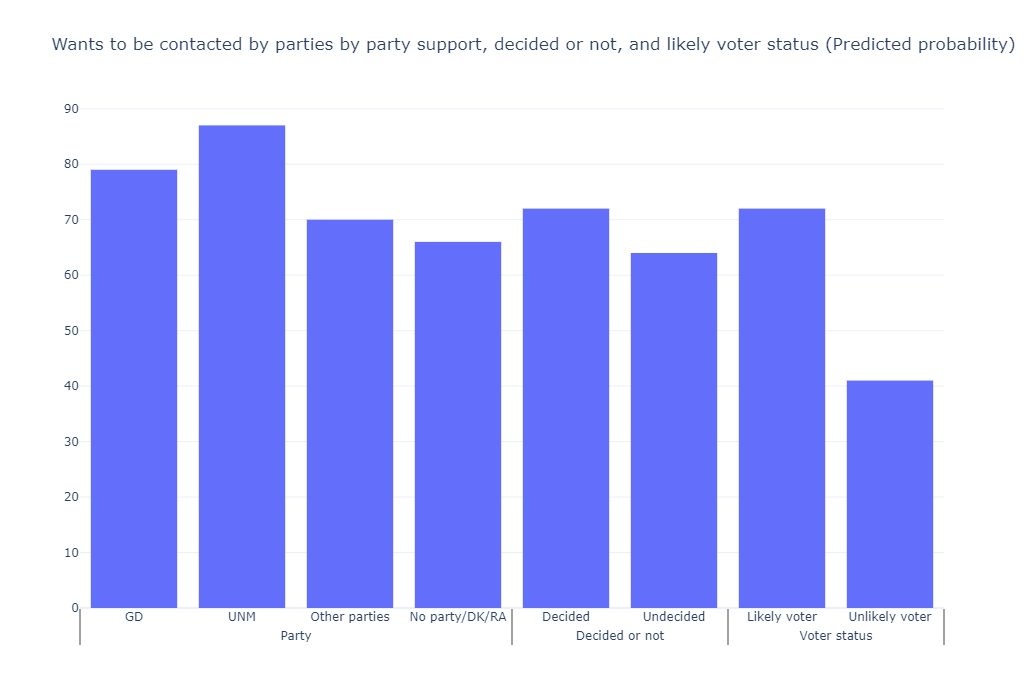 In August, the COVID-19 case count was rising, though extensive restrictions on activity were not in place. Despite the rising case count, among those that wanted to be contacted, most wanted some form of in-person contact.

Demographics aside, people who supported an opposition party aside from the UNM were less likely to report they wanted to be contacted in person. Likely and unlikely voters did not vary significantly on whether they wanted in-person contact or not. Similarly undecided and decided voters had similar views, controlling for other factors.

The above data suggests that during political campaigns in Georgia, people prefer in-person contact, even in the face of the pandemic.

The people who wanted to be contacted during political campaigns were more likely to be political partisans and engaged in politics. In turn, this suggests that campaigns likely have an easier time turning out supporters than creating them.

The data used in this article is available here.

The results of models looking at how people want to be contacted are multinomial regression models. The first contains demographic variables only. The remaining models included one of the following variables: party support, decided voter or not, and likely voter or not.

The results of models looking at who wants to be contacted are logistic regressions. The first contains demographic variables only. The remaining models included one of the following variables: party support, decided voter or not, and likely voter or not.

The views expressed in this article do not represent the views of CRRC Georgia, NDI, or any related entity.