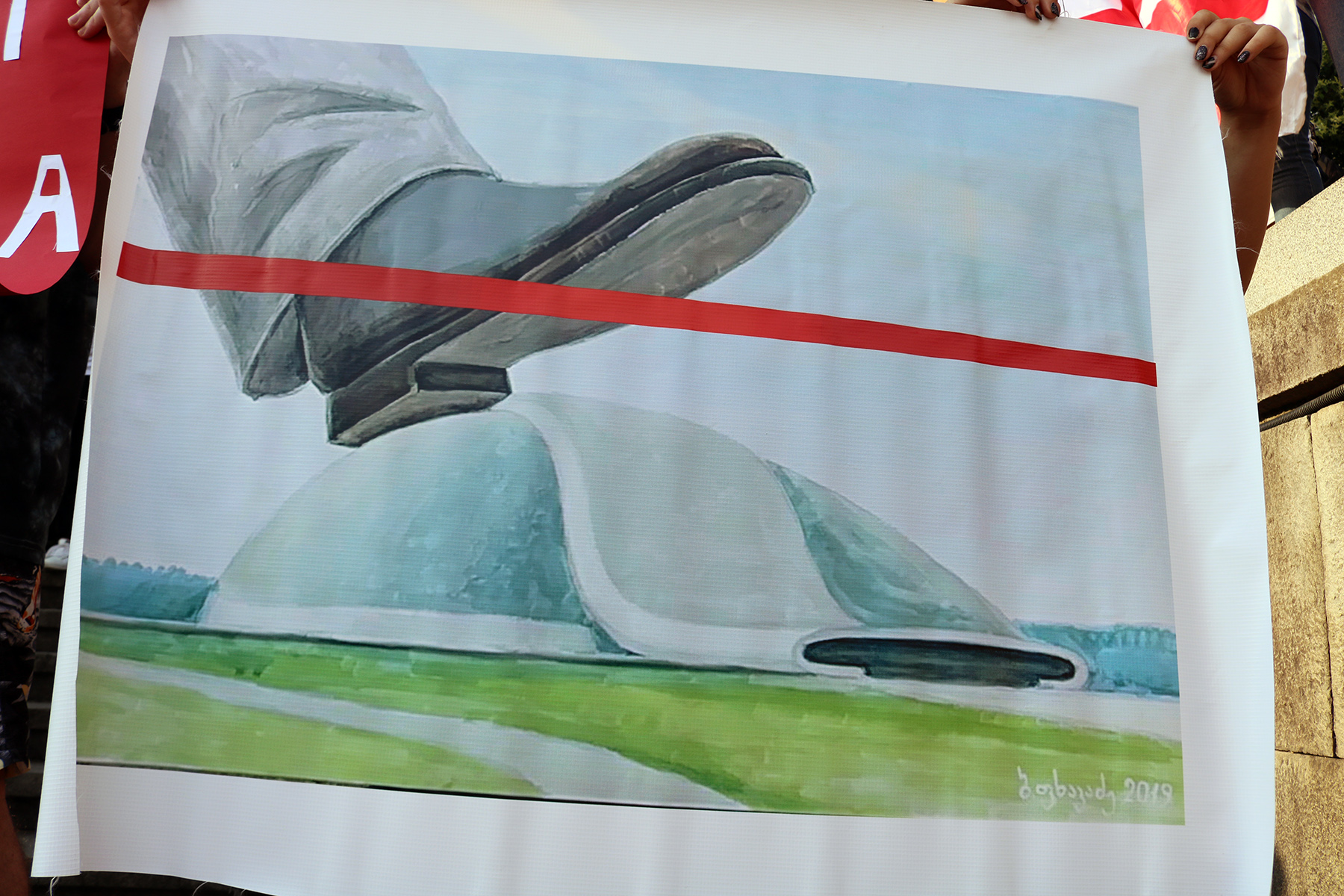 The newly created civic movement ‘Leave Parliament in Kutaisi’ is fighting to bring the Georgian parliament back to Kutaisi, after a series of broken promises have left the city reeling.

She says that LPK will not allow any political party to run a successful election campaign in Kutaisi unless they declare that the parliament will return to the west-Georgian city.

The LPK claim that the 2018 decision by the ruling Georgian Dream party to return Georgia’s parliament to Tbilisi, will lead the city into terminal decline. One more broken promise in a string of broken promises, which have saddled the city with abandoned architectural eyesores and left it mired in poverty.

‘We’re not saying that everyone would work in the parliament and it would [fully] solve the unemployment problem’, Pkhakadze said. ‘But having the parliament here [in Kutaisi] would automatically bring about positive changes’.

A parliament for Kutaisi

On 26 May 2012, Georgia’s Independence Day, the country’s new parliament was inaugurated in Kutaisi to great fanfare. It is a massive six-storey glass dome, that, according to the Institute for the Development of Freedom of Information (IDFI,) had a price tag of around ₾326 million ($110 million). The building is perhaps the grandest architectural symbol of the transformative and controversial rule of Georgia’s third president, Mikheil Saakashvili.

It was under his initiative that the parliament was moved 220 kilometres from Tbilisi to the comparatively small west-Georgian city of Kutaisi. The authorities at the time assured the public that transferring state agencies from the capital to the regions would help a process of decentralisation and contribute to economic development in the regions.

But, it soon became clear that the parliament would not remain in Kutaisi for long. In October that year, Saakashvili’s United National Movement (UNM) party lost the parliamentary elections and the Georgian Dream coalition came to power.

Informal as well as official discussions soon began about moving parliament back to Tbilisi.

Some opponents of the Kutaisi parliament argued that the real reason the UNM moved it from Tbilisi to Kutaisi was to reduce the political power of the legislature. This, they argued, isolated parliament from the business and diplomatic elites that were still overwhelmingly concentrated in the capital.

Georgian Dream officials simply stated that it was inefficient if not impossible to work in two buildings across two separate cities after the government moved parliamentary committee hearings back to Tbilisi in 2013, while plenary sessions continued to be held in Kutaisi.

There were also reports of structural problems with the parliament building itself. The transparent glass exterior effectively turned the inside into a greenhouse as air-conditioning struggled to keep up.

It has recently emerged that the Ministry of Internal Affairs plans to use the Kutaisi parliament building as the location for a regional police hub.

Snakes in the grass

Eka Pkhakadze says that shortly after the parliament started operating in Kutaisi, the government stopped maintaining the building’s premises.

The area became littered with rubbish, the grass was rarely cut, and locals frequently noticed snakes in its vicinity during the summer months.

An artificial lake where children used to bathe dried up while the path in front of the parliament developed cracks and potholes as a result of parliamentary deputies parking their cars on the path.

Inside, rain would often leak through the roof of the parliament building.

Like the parliament, the House of Government building in Kutaisi also suffered an unfortunate fate. It opened in November 2011 but ceased working only a year later, after the UNM lost power in October 2012. According to the IDFI, the building cost around ₾21 million ($7.2 million).

The former House of Government is now locked up and neglected. It continues to deteriorate on a daily basis.

OC Media asked the Partnership Fund, a state-owned fund and the legal property owner of the House of Government building, about ongoing upkeep costs as well as future plans for the building. The Partnership Fund replied with a brief statement in which it only acknowledged that the fund considers the building ‘an investment property’.

According to an employee of the Kutaisi parliament building, the House of Government building has also sustained water damage due to rain. The Partnership Fund did not allow OC Media to enter the premises, but when looking in from the outside, it was visible that the interior was not maintained — it was dusty and filled with rubbish.

During the Soviet era, Kutaisi was a bustling industrial city. But when the USSR collapsed, so too did the planned economy. Kutaisi’s giant factories fell silent overnight.

Today, many local people say the city’s main problem is unemployment, as well as the poverty and outmigration it engenders.

As it began to move government functions back to Tbilisi, the Georgian Dream party made a new promise to Kutaisi, one, that could perhaps fill the void left by the movement of the country’s legislature. In March 2016, a few months ahead of the parliamentary elections, they announced a massive new construction project.

‘Dream City’ was to be a €270 million ($300 million) recreational complex built near the parliament building. It would consist of several multifunctional structures, including hotels, casinos, a trade centre, and a swimming pool.

Aia Entertaiment LLC was the company chosen to implement the project. Despite the project’s scope, the company was inexperienced and had only been created the previous year.

According to one of the company’s directors, Vakhtang Gagnidze, construction would start no later than 90 days after Kutaisi Municipality transferred the future territory of Dream City to the national government. The transfer took place, but construction never started.

Today the area is nothing but an empty field.

Nika Kamushadze of the Economy Ministry’s National Agency of State Property told OC Media that they knew nothing about the company or why they did not carry out the project, as no contract had been signed. ‘Land was transferred to the Ministry of Economy and after that nothing has happened’, he said.

Aia Entertainment is still listed in the public registry, however, no phone number is indicated and the email address listed is inactive.

In April 2017, Georgian Dream made another promise to the people of Kutaisi: a new railway hub that would connect trains coming from the east and west of the country to Kutaisi Airport.

But in July 2019, only two years after the triumphal announcement of the project, Deputy Economy Minister Akaki Saghirashvili told the Georgian Public Broadcaster that the new railway hub will no longer be built. He added that rehabilitation of the existing Kutaisi railway station — located two kilometres away from the airport — is in the works.

On 6 April 2019 Georgian Prime Minister Mamuka Bakhtadze made the latest grand promise to Kutaisi, announcing the construction of an electric car factory which is set to produce up to 40,000 cars per year.

But the legacy of broken promises has left residents of Kutaisi sceptical.

‘If they implement [the factory] it will be good,’ local resident Pridon Asatiani tells OC Media. ‘But if not, then that will be very sad, because we need production and employment like a patient needs medicine.’

Not all the promises have been broken, however — at least not completely. In Mukhrani Forest, on the outskirts of Kutaisi, a new university is being built.

The Kutaisi University Complex (then called the Kutaisi Technological University) was announced in September 2016 in a ceremony attended by a number of ministers as well as Bidzina Ivanishvili, the Chair of Georgian Dream.  Constructed with funds from Ivanishvili’s Cartu charitable foundation, the new university was slated to receive its first intake of students in 2019.

However, the administration of the Kutaisi University Complex told OC Media that the opening date has been postponed until 2020.

‘In 2020 we plan to receive at least 1,000 students, the number will increase dynamically each year and in the long-term, the university plans to host 60,000 students’, a representative of the university administration told OC Media.

Nugzar Kokhreidze, the chair of the Research-Intellectual Club — Dialogue of Generations, a local NGO, thinks that the Technological University project is an important investment but is doubtful if it can help turn the fortunes of the city around.

He cites the example of the Akaki Tsereteli State University in Kutaisi, which has roughly 11,000 students. Kokhreidze says the city has not felt any positive economic effects from this quantity of students.

Considering that the Kutaisi University Complex will be on the outskirts of the city, Kokhreidze fears that the student body and its economic impact will be insulated within the university campus.

‘What was real has been taken away, and what they promise is not real yet’, he says. ‘We citizens are the victims of decisions made by one person, the same as it was in the past. No one asked us about moving the parliament here and no one asked us about taking it away either. Today we have only promises.’

Lana Kokaia is a multimedia journalist originally from Gali District. She has been a journalist since 2015.

5. After one year of inaction, alleged rapist of young Azerbaijani activist arrested