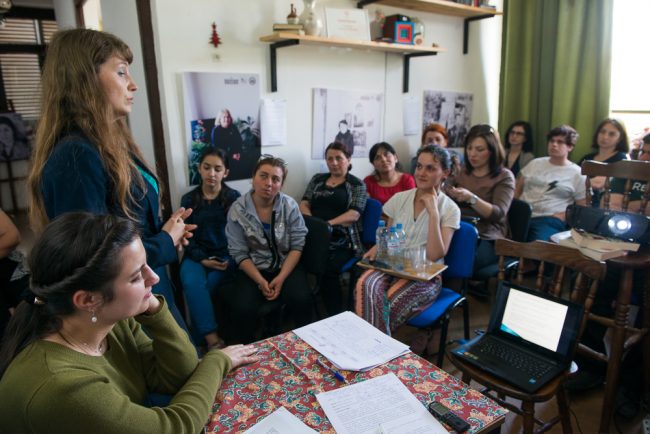 When Aleko Gamkhuashvili first came to Anika, he didn’t engage in any of the activities available at the centre. Anika is a Tbilisi-based NGO that runs a day-centre for people with disabilities and supports them in finding employment.

‘He was our most passive member; he would stay in one place and never move, stating that he couldn’t and wouldn’t do anything’, says Irakli, a member of staff at Anika. Irakli, who uses a wheelchair, works with people with disabilities like Aleko to help them gain confidence and move forward in life.

Now Aleko works as a broadcast scheduling manager at Georgian video-portal myvideo.ge. Every day he is taken to Anika in a specially adapted vehicle and works from there. This September, he plans to enrol in college to study graphic design. It will be his first time in formal education.

As a wheelchair user in Georgia, Aleko never had the opportunity to go to school. Before he was referred to Anika by a social worker, he had little interaction with others at all.

Aleko was lucky. He got his job after his employers contacted the centre to offer a placement for two people with disabilities. Unfortunately, the overwhelming majority of employers are a different case.

According to disability rights groups, employers often turn down candidates on the grounds of accessibility. In the absence of even basic accessibility provided by the state, employers refrain from taking the social responsibility to create the necessary environment. For the jobseekers that don’t require accessibility, other arguments are used — that it’s too difficult to communicate with a person with an intellectual disability, or an epileptic’s condition will interrupt the work.

Irakli from Anika says employers see employees with disabilities as a risk they are unwilling to take, even though a person’s disability does not determine their efficiency. ‘Those who do take the risk are more than satisfied with the performance of the candidates’ he says.

To encourage employers to take on more employees with disabilities, the government offers a number of incentives. These include tax exemptions for people with disabilities on any single source of income of up to ₾6,000 ($2,400) per year, and subsidising 50% of an employee’s salary for the first four months, provided they are offered at least a six-month contract thereafter. The subsidy also applies to seasonal jobs and focus group research from the Public Defender suggests that employers are more likely to hire people with disabilities for this type of work in order to have their costs subsidised and appear more socially responsible.

The Supported Employment scheme is the government’s main programme for helping people with disabilities into employment. The scheme currently employs 9 employment support specialists for the whole country, although they hope to increase this number to 15.

Many people with disabilities complain that this is not enough to meet demand, given that each specialist is responsible for supporting at least 10 jobseekers a month and the process of helping them find employment takes time.

‘The main issue we have with job seekers is that they don’t know what they’re capable of. It’s hard to decide what you want to do in just one month when you’ve spent most of your life unemployed’, says Nutsa Bakhsoliani, one of the Social Services Agency’s employment support specialists.

Nutsa and two of her colleagues manage all applications in Tbilisi. Many applicants are unskilled and lack a good education due to accessibility problems. If a candidate is not qualified for a professional role, they can apply for an internship, where they will receive a stipend of ₾200 ($82) a month. Another option is training, but there are limited courses offered by professional colleges. If there are no suitable programmes available, candidates can be referred to NGOs like Anika which can help them with training and match them with job opportunities. The organisation has so far helped 29 people with disabilities find work, while 120 are still on the waiting list.

‘These are people who are working hard to fulfil their right to employment. But the misconceptions [around disability] are a major obstacle’, says Nino Gorgadze, a job coach with Anika. ‘Neither jobseekers nor employers fully understand who qualifies as a person with disabilities, or what an adapted working environment means’. 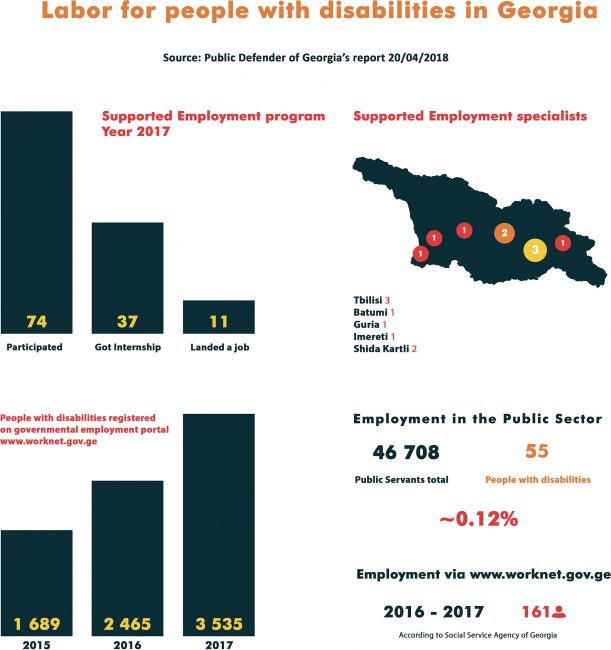 A major factor discouraging people with disabilities from applying to work in the public sector is that they would no longer qualify to receive state disability assistance.

‘The purpose of this social assistance is to compensate for the absence of important services […] for people with disabilities. These remain an issue regardless of someone’s employment status. Besides, there is no logic to applying this policy only to those employed in the public sector’ argues researcher Lela Gvishiani, from rights group EMC. The group has fought for employees in the public sector to be allowed to keep their disability assistance.

Although the public defender confirmed that the policy amounted to discrimination, the problem remains unresolved. Many people with disabilities, especially those whose families receive social assistance for being under the poverty line, prefer to rely on the stability of state aid rather than risking an unstable employment situation and the loss of their benefits. The government is currently drawing up a plan for a new policy which would allow people with disabilities to keep their social assistance even if they are employed.

‘To this day, I had no idea what my daughter’s rights were’

The problem is even more acute in the regions. ‘Who here has heard of the government programme to support the right to work?’ — Esma Gumberidze, a visually impaired activist, asks at a local meeting of people with disabilities and their parents in Tsnori, a village in Kakheti Region. The room is silent.

With only one employment support specialist in the entire region — located 60 km away from Tsnori — most of those present could not imagine people with disabilities in employment, especially when the basic needs of people with disabilities are ignored and disability remains a taboo. Tamta Kusrashvili from the Union of Parents of People with Disabilities for Signaghi recalls how people reacted negatively when she tried to deliver information leaflets about intellectual disability. ‘When we celebrated Down Syndrome Day, parents would tear up the leaflets in front of me and shut the door’, she says.

Organisations like Tamta’s try to reach a community that is often kept behind closed doors. With their help, Nino Kajrishvili, who has an intellectual disability, will start a trial period at the local children’s entertainment centre. The job was arranged through a private contact.

According to Olga, what little statistics there are suggest there are fewer women than men with disabilities in employment, which goes against the global trend.

She explains that as men have a higher social status in Georgia, a man with disabilities has a higher chance of getting married than a woman. This she says, is one of the reasons families are often more reluctant to register their daughters as disabled. ‘We don’t even know how many women are out there, hidden from sight’, Olga says.

A major obstacle to integrating people with disabilities into society is that they are still treated as patients. Esma Gumberidze still can’t officially register her organisation since the government does not recognise the signature of a blind person.

Blind people can only sign a contract through someone else with power of attorney, in the presence of two witnesses, neither of whom can have family or work connections with the person. Such complex bureaucracy can scare away employers, making blind people one of the least employed groups.

Esma cannot print out the organisation’s charter either, as braille printer at the House of Justice can only print simple documents. After years of writing complaints, Esma is taking her case to court to have her signature recognised by the government.

Despite ratifying the UN convention on the rights of persons with disabilities in 2014, the government has no clear deadlines for implementing its responsibilities.

Different aspects of disability rights are addressed in a number of strategies and bills, but they most prominently feature within the directives of the EU–Georgia Association Agreement. The government’s new employment strategy 2018–2020, for example, will bar discriminatory job ads, preventing employers from advertising for employees based on gender, age or social status.

New legislation on the rights of people with disabilities currently being developed by the Ministry of Health, Labour and Social Affairs and the Ministry of Justice, in consultation with several NGOs, includes a suggestion for quotas. Under the new model, people with disabilities would no longer be simply disabled, but would have the option of having their capabilities assessed by a team of specialists.

Irakli Sheperteladze, from Anika says a lot of jobs require medical checks if a candidate has a disability. Sometimes employers demand a reference from an applicant’s doctor confirming they are fit to perform certain tasks. Furthermore, they may ask an NGO to take responsibility for the employee’s health. The process of obtaining a basic medical reference can be discriminatory too. Irakli recalls a consultation with a doctor that had to take place in the corridor of the clinic since the door of the consultation room was not adapted for a wheelchair. ‘She actually asked me to get up’, he says.

This article was prepared with support from the Friedrich-Ebert-Stiftung (FES) Regional Office in the South Caucasus. All opinions expressed are the author’s alone and do not necessarily reflect the views of FES.