Fighting between Armenian and Azerbaijani forces in Nagorno-Karabakh is continuing for a second day.

The biggest developments from yesterday and last night:

[Read the full coverage of yesterday's events as it happened: First day of clashes between Armenia and Azerbaijan]

The report is based on the account of two unnamed fighters who claim that they were deploying to Azerbaijan to fight in the ongoing clashes with Armenian forces in Nagorno-Karabakh. Previously active in Turkish-controlled territory in northern Syria, the fighters said their transport and deployment was coordinated with Turkey.

Colonel Vagif Dargahli, a spokesperson for Azerbaijan’s Ministry of Defence, has reported that Armenian Armed forces fired at villages the of Yukhari Agjakend and Garamusaly of the Goranboy District.

He added that Azerbaijan’s Army reacted by ‘taking adequate countermeasures’.

In a recent statement released by the CSTO, the Russia-led military alliance of which Armenia is a member, Secretary-General Stanislav Zas expressed ‘grave concern’ over the ongoing clashes in Nagorno-Karabakh.

‘It is necessary to immediately restore the ceasefire and return to the negotiation process’, the statement reads. ‘The resolution of the conflict in Nagorno-Karabakh is possible only by political and diplomatic methods.’

Citing the security situation Armenia’s State Revenue Committee has urged drivers to avoid the Bagratashen customs point when travelling to Georgia, and instead to use the Bavra customs point.

The Bavra crossing point, which connects to the Georgian region of Samtskhe-Javakheti, is considered by Armenian authorities to be ‘a safer route’ — likely due to its further distance from the border with Azerbaijan.

The European Court of Human Rights has reported that they received a request from Armenia to indicate interim measures to Azerbaijan to ‘stop indiscriminate attacks’ and the targeting of civilians and settlements.

Interim measures are ‘urgent measures which, according to the court’s well-established practice, apply only when there is an imminent risk of irreparable harm’.

During these trying times, access to unbiased information is more crucial than ever. Our team is currently working overtime to keep people up to date with the latest reports about the conflict.

If you appreciate our work, please consider supporting us. 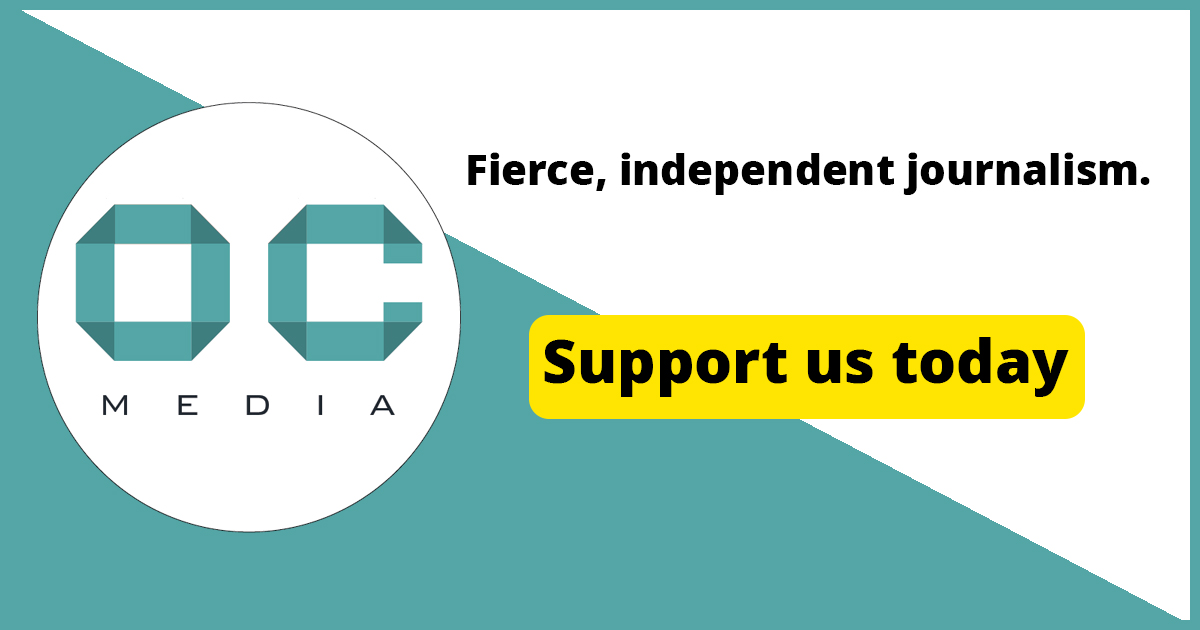 Heydar Aliyev International Airport has announced that they will reduce the number of flights for the coming days.

According to the report, several international flights scheduled until 4 October have been cancelled.  Flights to Nakhchivan will cease entirely until 30 September.

Bahruz Samadov, an activist from Azerbaijan’s Nida Civil Movement, told OC Media that Ibrahimov was perhaps the only person to openly criticise the war online.

Azerbaijan denies disproportionate presence of ethnic minorities on the frontline

Azerbaijan’s Conscription and Mobilisation Service has denied allegations that casualties among Azerbaijani forces have been disproportionately from ethnic minorities, calling the claims ‘absurd and slanderous’.

‘When it is necessary, reservists, regardless of their ethnic origin, will be called to local structures of The [Conscription and Mobilisation] Service according to the law’, they said.

Since the beginning of military actions on Sunday, several statements have appeared on social media about the deaths of soldiers from the country’s Talysh and Lezgi communities.

Talysh activist Rahim Shaliyev told OC Media that the Azerbaijani Ministry of Defence should provide more information about which units of the army were being sent to the frontline. He also criticised the government for not providing details about Azerbaijani losses, the ‘majority of which’ he believed were Talysh.

On Tuesday, a group claiming to be the leaders of ethnic minority communities in Azerbaijan released an open letter stating that Azerbaijan was their ‘homeland’, and that ‘the Republic of Azerbaijan is our state’.

They accused Armenia of disrupting relations between the peoples of Azerbaijan and ‘creating artificial conflicts on ethnic and religious grounds’.

They also condemned what they said was ‘another slanderous campaign by Armenia’, saying that they always part of the ‘holy war of Azerbaijan to liberate its territories’.

Shaliyev told OC Media that he was doubtful that the letter’s authors spoke for the Talysh. ‘Talysh people abroad don’t want the war. And they don’t treat either Azerbaijanis or Armenians as enemies’, he said.

Abkhazia and South Ossetia call for an end to ‘Azerbaijani attack’

On Sunday, the Abkhazian and South Ossetian foreign ministries called on the international community to intervene to stop the conflict over Nagorno-Karabakh. Both identified Azerbaijan as the assaulting side.

In their statement, the South Ossetian Foreign Ministry also urged international actors to ‘immediately make all possible efforts to […] prevent military intervention by third countries’. Their Abkhazian counterpart underlined the role of the OSCE Minsk Group in the peaceful resolution of the conflict.

In a speech delivered today, Turkish President Recep Tayyip Erdogan has criticised the OSCE Minsk Group for failing to prevent conflict in Nagorno-Karabakh, stating that Russia, France, and the United States ‘have done everything in their power not to solve this problem’. He has called on Armenia to ‘withdraw from Azerbaijani lands’, and that ‘only then would peace and stability prevail in the region’.

Caucasian Knot has reported that Lusine Karakhanyan, Nagorno-Karabakh’s Minister of Education, has announced the closure of all schools and educational facilities in the region.

The Nagorno-Karabakh Security Council has announced the deaths of 28 more service members on the Armenian side, bringing the total to 59.

‘My condolences to the family and friends of those who lost their life in battle while defending Artsakh [Nagorno-Karabakh] borders. Impossible to break the spirit of people who can unite in a matter of hours’, he tweeted.

My condolences to the family & friends of those who lost their life in battle while defending #Artsakh borders. Impossible to break the spirit of people who can unite in a matter of hours.

Azerbaijan has yet to release any casualty figures. However, footage released by the Nagorno-Karabakh Defence Ministry showing the destruction of military vehicles and bodies identified as Azerbaijani soldiers suggests they have taken losses.

Pro-Azerbaijan demonstration in in Tbilisi

Around a dozen Azerbaijanis are holding a demonstration in Tbilisi and marching to the Embassy of Azerbaijan.

The demonstrators are holding Azerbaijani and Turkish flags and posters stating ‘Karabakh is Azerbaijan’, ‘End the Armenian occupation’, and ‘We are with you, Azerbaijan’.

Former Georgian president Mikheil Saakashvili has weighed in on the conflict, stating on Facebook that Nagorno Karabakh is part of Azerbaijan’s sovereign territory.

‘My position is absolutely clear and it is based on the principle of state unity, and so Nagorno Karabakh is a part of the Republic of Azerbaijan’s sovereign territory and nothing can change this.’

‘Of course, at the same time, everyone who was displaced from this region has the right to return to their homes and those who already live there have the right to live peacefully and their rights should be protected’, he said.

He added that Georgia wanted there to be friendly, brotherly relations between Georgia, Armenia, and Azerbaijan, adding that their future should be like the three Baltic countries.

Azerbaijan has accused Armenian forces of targeting civilians, killing two children in Naftalan District. Yesterday Azerbaijan reported the death of 5 people from one family in Naftalan.

Assistant to the President, Hikmat Hajiyev, reported that the city of Tartar had also been under fire since the morning, with a carpet factory in the city being hit.

Azerbaijan’s General Prosecutor’s Office reported that one civilian has died and three others injured in Tartar.

The General Prosecutor’s office said that one person was also killed today in Aghdam District.

The General Prosecutor’s office said the total number of injured civilians was now 27.

The Head of the Georgian Parliament’s Defence and Security Committee, Irakli Sesiashvili, has offered to mediate the conflict if there was an interest from Armenia and Azerbaijan.

‘Unfortunately, today there are no signs of this’, he told journalists. He also said that Georgia was ready to provide humanitarian assistance.

‘You know that Georgia holds a somewhat neutral position and our neighbours perfectly understand this and they care for our neutrality. We can become proactive any time and if there is a desire from both sides we are ready to engage in the peace process’, he said.

‘I hope and am practically sure that the bigger players won’t engage in this process [the conflict] because everyone perfectly understands that this will bring us to international crisis and it will have an influence not only in the region but on the world.’

During a press briefing on Monday morning, Artsrun Hovhannisyan from Armenia’s Defence Ministry said that Armenian forces had 200 wounded, 80 of which have been moved to hospitals in Armenia’s capital Yerevan.

He denied Azerbaijani claims that there are hundreds of fatalities on the Armenian side. He also dismissed rumours that people were being evacuated from Nagorno-Karabakh.

Hovhannisyan reconfirmed that the Armenian side had regained several military positions the previous night and promised to provide additional information throughout the day.

He also stated that they had taken no Azerbaijani prisoners but that the bodies of several dozen Azerbaijani soldiers had been recovered on the Armenian side.

Hovhannisyan also said that the Azerbaijani side was continuing to bombard the city of Martakert and other civilian settlements.

Some on social media have pointed out a discrepancy between the reporting of Sputnik’s Azerbaijani and Armenian services.

Sputnik is a Russian state-run news agency with branches in several countries.

Sputnik Armenia has focussed on amplifying messages from the authorities in Armenia and Nagorno Karabakh while Sputnik Azerbaijan has done the same for Azerbaijan. Neither site’s coverage has offered significant coverage of the opposing side.

Azerbaijani Major General Mayis Barkhudarov has told Report.az that there is currently ‘very heavy fighting’ taking place on the frontline.

On Monday morning, the Azerbaijani Ministry of Defence claimed to have ‘cleansed several favourable heights’ around the village of Talish, in Nagorno-Karabakh. Talish was the site of some of the most fierce fighting during the April 2016 four day war.

However, at 09:00 the Nagorno-Karabakh Security Council said they had retaken ‘several military positions lost to Azerbaijan earlier’, without specifying if the areas around Talish were among them.

After a long silence on the issue, the US State Department issued a statement last night calling for an immediate ceasefire and a return to negotiations.

Asked about the situation during a press conference, President Donald Trump said the US was ‘looking at it very strongly’.

[Read more about US commentary on the ongoing clashes: Trump on Nagorno-Karabakh fighting: ‘We’ll see if we can stop it’]

Clashes continued overnight. The Defense Army of #Artsakh/#NagornoKarabakh has restored a number of military positions lost to #Azerbaijan earlier.

Armenian forces confirmed the deaths of 15 more service members, bringing the total to 31.