Major fighting between Armenian and Azerbaijani forces in Nagorno-Karabakh is continuing for the third day.

The biggest developments from yesterday and last night:

[Read the full coverage of events as they happened: Sunday and Monday]

Vladimir Zhirinovsky, leader of Russia’s far-right Liberal Democratic Party, known for his flamboyant and inflammatory rhetoric, suggested 'including Nagorno-Karabakh into Russian Federation' as one of the options to solve the conflict, Russian state-run news agency Regnum reported today.

‘In this case, both Azerbaijanis and Armenians would calm down', he reportedly said today.

As an alternative solution, Zhirinovsky also suggested annexing both Armenia and Azerbaijan into the Russian Federation.

Amnesty International has released a statement expressing concern about internet access being cut in Azerbaijan, which Azerbaijan’s Ministry of Communications justified as being to prevent ‘provocations’.

‘This would be a disproportionate measure and violate the right to freedom of expression’, the statement reads.

‘Even more disturbing is the arbitrary detention of Giyas Ibrahimov in retaliation for his peaceful, anti-war views violating his right to free expression.’

They also urged all sides to ‘fully respect’ international humanitarian law, ‘particularly the prohibition of direct attacks on civilians and civilian objects, and of indiscriminate attacks’.

The renewed hostilities in Nagorno-Karabakh have received a mixed response from Georgia’s ethnic Armenian and Azerbaijani communities.

Vagif Dargahli, a spokesperson for Azerbaijan’s Ministry of Defence, has denied Armenia's claim that a Turkish F-16 shot down an Armenian Su-25 calling it a ‘lie’ and a ‘fantasy’.

The Armenian Ministry of Defence has announced that this morning a 'Turkish F-16' violated their airspace and shot down one of their Sukhoi-25 fighter bombers. The pilot did not survive.

The Armenian MOD had made claims in the past several days that Turkish F-16s had been active in the fighting in Nagorno-Karabakh. The Azerbaijani military has denied having F-16s in their arsenal.

While meeting his counterpart Nikos Dendias in Greece, the US Secretary of State Mike Pompeo said that both had discussed the conflict in Nagorno-Karabakh, ‘where both sides need to stop the violence and work with the Minsk Group co-chairs and return to substantive negotiations as quickly as possible’.

The USA co-chairs the OSCE Minsk Group, set up in 1992 to facilitate peaceful solutions to the conflict, together with Russia and France.

Azerbaijan has started to send reservists to the frontline

Azerbaijan’s Mobilization and Conscription Service has announced that buses with reservists are being sent from different structures of the Armed Services throughout Azerbaijan to the frontline.

Kremlin spokesperson Dmitry Peskov condemned statements ‘about military support or action’ in the ongoing hostilities between Armenia and Azerbaijan stating that they ‘add fuel to the flames’.

Peskov was responding to an inquiry over Russia’s possible intention to help Armenia militarily within the framework of the Collective Security Treaty Organization (CSTO).

‘The Kremlin, above all, is guided by the need for an immediate ceasefire and the end of hostilities', state-run Russian news agency Tass quoted Putin's spokesperson as saying.

Peskov’s comment followed the claim by Turkish Foreign Minister Mevlut Cavusoglu who said earlier today that Turkey was ready to ‘support Azerbaijan both at the negotiating table and on the field of battle’.

The Azerbaijani Defence Ministry has reported that S-300 long-range surface-to-air systems have departed from Yerevan heading to Nagorno-Karabakh.

She said the Armenian side may be forced to employ ‘pieces of equipment and munitions designed to engage wide-area targets, intended for large and indiscriminate destruction of manpower, and static and mobile property alike

TASS: Turkey voices support for Azerbaijan in negotiations and ‘on the field of battle’

‘We are ready to support Azerbaijan both at the negotiating table and on the field of battle’, Russian news agency TASS reports the Turkish MFA as stating.

One civilian was killed in the Vardenis region of Armenia as a result of shelling by Azerbaijani armed forces, Armenia’s Foreign Ministry reports. 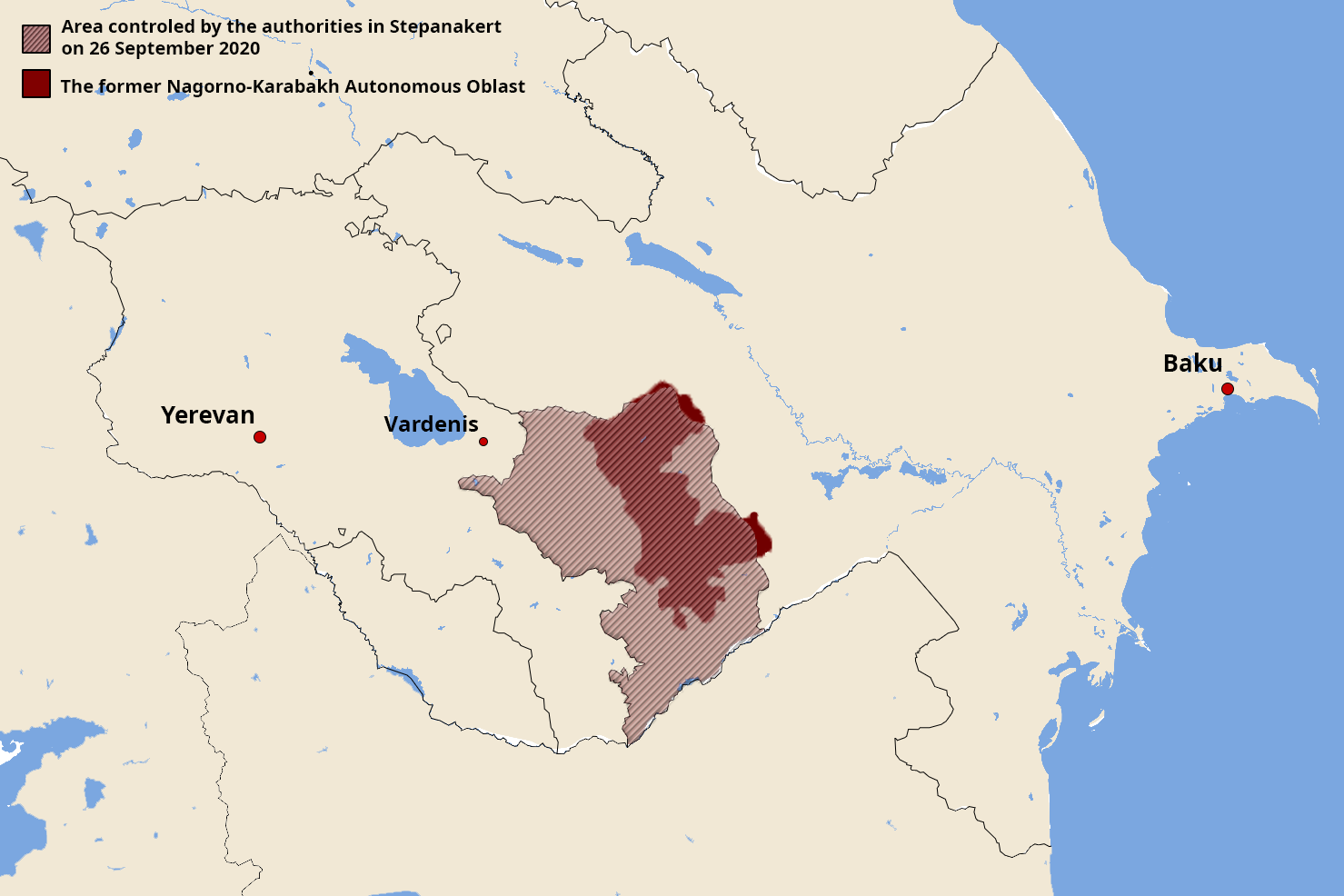 ‘Azerbaijani armed forces have fired upon the military and civilian infrastructure of the region (Vardenis) and upon its peaceful population’, a spokesperson for Armenia’s Ministry of Foreign Affairs has claimed. They have also said that there are deaths among civilians — they did not say how many.

Vardenis is not in Nagorno-Karabakh and is part of the territory of the Republic of Armenia.

Azerbaijan’s Foreign Ministry and Chief Prosecutor’s Office have stated that 10 Azerbaijani civilians have been killed and 30 injured so far.

Azerbaijan’s Public TV also reported that their car came under fire in Tartar, a district of Azerbaijan located on the frontline with Nagorno-Karabakh.

The UN Security Council will hold an emergency session behind closed doors on the situation in Nagorno-Karabakh at 1 am on Wednesday. The session was requested by Belgium.

A spokesperson of German Embassy in Azerbaijan told Azerbaijani Trend News Agency that the session will be ‘informative in nature’.

Azerbaijan reports on start of fighting for Fuzuli

Azerbaijan’s Ministry of Defence has reported that since the morning hours, fighting has started for the city of Fizuli (Varanda).

Fizuli has been a ghost town since the war in the 1990s.

A civilian bus in Vardenis has been hit by fire from an Azerbaijani UAV, Armenian Defence Ministry spokesperson Artsrun Hovhannisyan wrote in a Facebook post, alongside a photo purportedly showing the burning bus.

The municipality of Vardenis is outside of Nagorno-Karabakh and is on the territory of the Republic of Armenia.

This morning the Azerbaijani Defence Ministry claimed that Armenia shelled the Dashkesan region with artillery stationed in Vardenis. Armenia has ‘categorically’ denied the accusation.