Civilian casualties have been reported on both sides as Azerbaijani military forces stage a military action across ‘the entire line of contact’ in Nagorno-Karabakh.

Nagorno-Karabakh’s Human Rights Defender Artak Beglaryan has reported that two civilians had been killed.  Meanwhile, videos purportedly showing the shelling of Stepanakert and surrounding areas have spread on social media in Armenia.

The Azerbaijani Ministry of Defence has reported that civilians have been killed and wounded as a result of shelling by Armenian forces in a number of villages along the line of contact — they have not released any specific numbers.

The Azerbaijani government has also limited internet access throughout the country in order to prevent ‘provocations’. ‘We hope that the citizens of Azerbaijan will show understanding in connection with the restrictions’, a statement by the Communication Ministry reads.

Azerbaijan said they had deployed tanks and artillery units as part of the offensive. On Sunday morning, they confirmed that a helicopter had been shot down.

The escalation comes at a time of increased tensions. On Monday, the Azerbaijani State service for Mobilisation and Conscription announced that soldiers and officers in the reserves had been called for military training and inspection, and unspecified ‘special gatherings’.

Azerbaijani authorities also impounded a number of civilian pickup trucks for military use.

On Thursday, the US embassies in Armenia and Azerbaijan issued security warnings. The embassy in Baku urged for US citizens not to travel outside of the Absheron Peninsula.

This story will be updated as it develops.

The General Prosecutor’s Office has told Azerbaijani news outlet Report.az that five civilians from a single family have been killed in the Naftalan District of Azerbaijan ‘as a result of artillery fire by the Armenian armed forces against the civilian population’.

The Prosecutor’s Office earlier reported that 14 civilians had been injured since the beginning of the escalation.

The websites of several Azerbaijani government agencies including the Ministry of Defence, Interior Ministry, Foreign Ministry, Mobilisation and Conscription Service, and the General Prosecutor’s Office are currently offline.

Azerbaijan’s Ministry of Defence has stated that they have taken ‘visual control, as well as firearm and artillery control’ over the Vardenis-Martakert (Aghdara) highway connecting Nagorno-Karabakh and Armenia.

The false report was widely cited by Azerbaijani news organisations.

Armenian Prime Minister Nikol Pashinyan has had a conversation with Russian President Vladimir Putin about the fighting in Nagorno-Karabakh.

According to the Kremlin’s official Press Service, Putin ‘expressed serious concern over the resumption of large-scale armed clashes. It was noted that now it is important to take all the necessary efforts to prevent further escalation of the confrontation, and most importantly, it is necessary to stop military operations.’

In a television address delivered earlier today, Armenian Prime Minister Nikol Pashinyan called on the OSCE Minsk Group, as well as the international community, to understand the ‘seriousness of the situation’ claiming that an outbreak of a large-scale war in the region can spill over and threaten international security and stability. 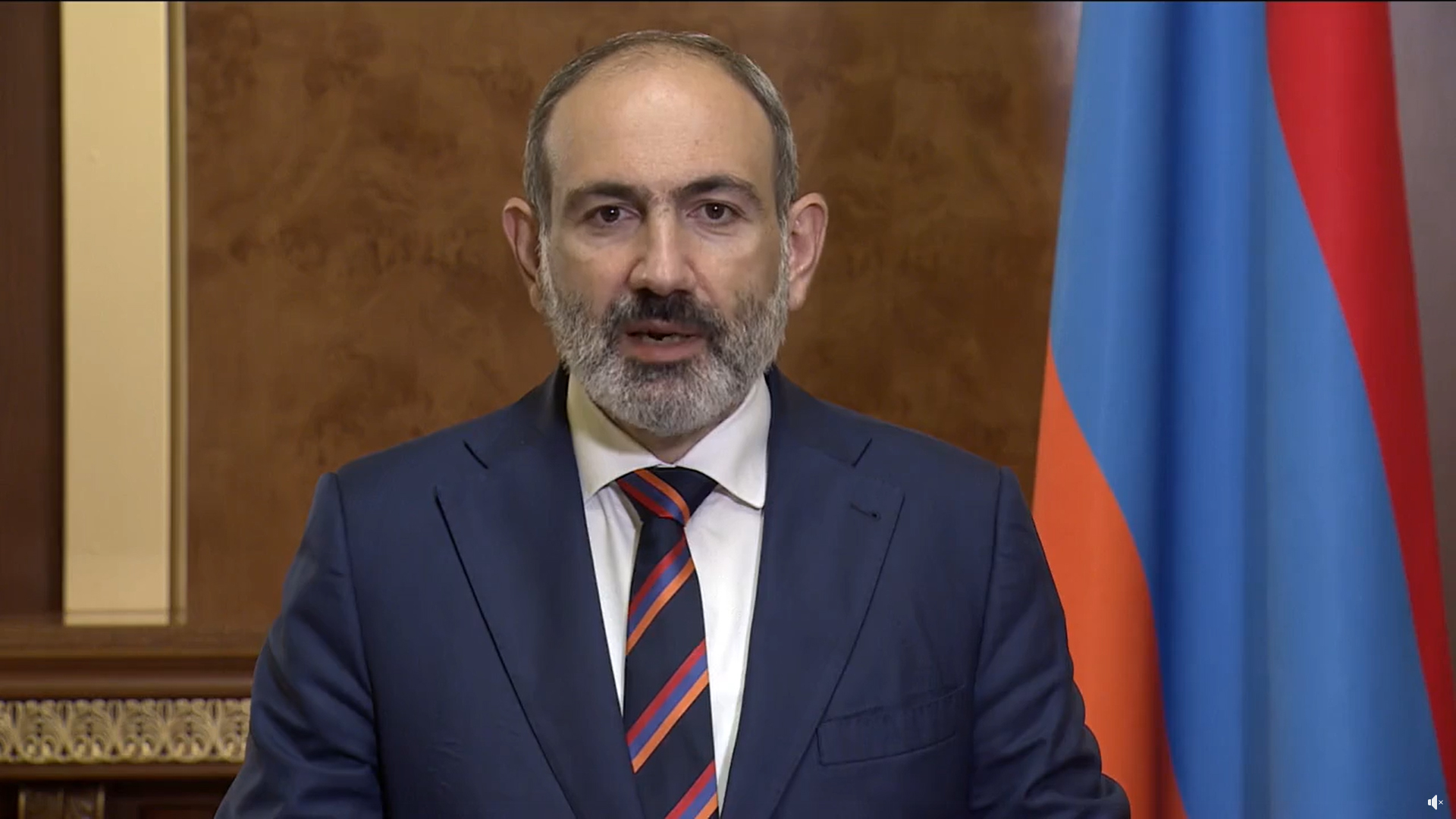 He also urged them to prevent a possible intervention by Turkey which could ‘have devastating consequences for the South Caucasus and the wider region’.

"According to preliminary data, the Armenian side has 16 killed and more than one hundred wounded" Artur Sargsyan, Deputy Defense Minister of the Republic of Artsakh

Azerbaijan has so far remained silent on their losses.

There have been several reports from Azerbaijanis on social media that the internet has been restored.

Grandma just called me via WhatsApp messenger. So social media is now accessible in Azerbaijan.

According to news agency Trend, a curfew will be in force in Baku, Ganja, Goygol, Yevlakh and ‘in a number of other cities’.

Opposition parties in Azerbaijan have reacted to the clashes with messages of support for the armed forces.  The Musavat and Popular Front Party stated that they stood with the army.

The leader of the ReAl party, Ilgar Mammadov, praised President Ilham Aliyev saying that they support ‘not only the words, but also the actions’ of Aliyev on the Nagorno-Karabakh conflict.

‘It needs to be continued. Shusha must be liberated, it can never be an Armenian city’, he said.

Olesya Vartanyan, a senior South Caucasus analyst at the International Crisis Group has said the escalation appeared to have been planned in advance by Azerbaijan,

‘Unlike in July 2020, this is clearly a well-prepared attack, which can turn into a bigger escalation than in April 2016’, she tweeted on Sunday morning.

1/4 Since morning large-scale attack in #Karabakh conflict zone. Videos from spots show that it takes place along the whole frontline with tanks and infantry.

Unlike in July 2020, this is clearly a well-prepared attack, which can turn into a bigger escalation than in April 2016

‘The attack was coming. There were numerous signals, all saw them and did nothing for weeks. There was a need for a pro-active international mediation. Many found reasons to OK this attack. If they stay silent now, expect a real war.’

Turkish President Recep Tayyip Erdogan expressed his support to Azerbaijan saying that Turkey ‘stands with its Azerbaijani brothers with all its means, as always’.

Earlier he called on ‘all the world’ to ‘stand by Azerbaijan’.

The Co-Chairs of the OSCE Minsk Group (Igor Popov of the Russian Federation, Stephane Visconti of France, and Andrew Schofer of the United States of America) condemned the use of force and regretted ‘the senseless loss of life, including civilians’.

Samvel Babayan, Secretary of the Security Council of Nagorno-Karabakh, has denied Azerbaijani claims that they have taken control of villages. He called the earlier statement by the Azerbaijani Ministry of Defence 'disinformation'.

Anar Eyvazov, a spokesperson for Azerbaijan’s Ministry of Defence, told Report.az that Azerbaijani Armed forces have taken control of several villages in Nagorno-Karabakh.

Assistant to the President Hikmat Hajiyev told Azerbaijani Trend News Agency that ‘there are already real results, a number of strategic heights, a number of territories, villages have been liberated from occupation’.

(15:57 - since the publication of this update: Azerbaijani authorities have claimed to have seized a seventh village: Ashaghi Abdurrahmanli)

Georgia’s Foreign Affairs Ministry issued a statement calling on the OSCE Minsk Group Co-Chairs and the international community to make every effort to stop the fighting in Nagorno-Karabakh and ensure a resumption of constructive dialogue.

‘We are watching with concern another military escalation between Azerbaijan and Armenia, which reportedly already resulted in casualties and damage to infrastructure. We hope that a ceasefire agreement will be reached’, the statement reads.

‘On our part, we declare that Georgia is ready to contribute to de-escalation and establish peace in the region in any way.’

Georgia’s President, Salome Zurabishvili, calls for an end to fighting in Nagorno-Karabakh.

Very concerned with the resumption of hostilities between Armenia and Azerbaijan. We call for peace. Stability and peace in our region must be our common cause.

Secretary of Nagorno-Karabakh’s Defence Council Samvel Babyan has announced that 10 Armenian service members have been killed during the fighting this morning.

‘Now by the decision of the government, martial law and a general military mobilization is announced in the Republic of Armenia’, Prime Minister Nikol Pashinyan wrote on Facebook.

Russian authorities have called for an immediate end to the hostilities in Nagorno-Karabakh.

‘It is necessary to move everything to the negotiating table, the fighting must cease.’ Vladimir Dzhabarov, first deputy chairman of the Federation Council's international affairs committee, told RIA Novosti.