The public outrage over Armine Harutyunyan walking down the runway at a Gucci fashion show reveals deep-seated sexism and anti-Armenian sentiment in Georgian society and shows the failures of Georgia’s media.

While the Gucci fashion show on 22 September, in which models dressed in outfits ‘inspired’ by mental illness, could have inspired a discussion about the commodification of a serious social issue, instead it was the appearance of a particular model that caused a firestorm of outrage in Georgia.

It was the presence of Armine Harutyunyan, a Yerevan-based artist, on the Gucci runway that sparked consternation among Georgians online; Harutyunyan was criticised for not being conventionally attractive enough to participate in the fashion industry, much less a Gucci runway show.

But the criticism was not only limited to the young woman’s appearance, it was also deeply charged with anti-Armenian animus,  a deeply rooted issue in Georgian society.

The furore arose after a number of Georgian news articles were published that claimed that Harutyunyan had become the face of Gucci — she had not, she simply walked down the runway in a single Gucci show. The articles did not seem to intend to foment attacks on her, however, by reporting only fragmented information and not reporting the wider context, the emphasis was thereby put on her physical characteristics and her ethnicity.

The article by Fortuna is an archetypical example: the headline reads: ‘A 23-year-old Armenian girl became a model for Gucci’. The rest of the article is focused on the admiration that Harutyunyan has received from Armenians.

‘Armenians write online that Armine is remarkably natural and original in her beauty’, the article reads.

Neither Fortuna nor the majority of articles initially published about Harutyunyan spelt the young woman’s surname correctly — spelling it ‘Arutian’ (არუთიანი) instead of ‘Harutyunyan’ (ჰარუთიუნიანი).  This basic mistake reveals that this news was published not to inform the public, but rather to be cheap sensationalism and clickbait.

‘Is it even a woman?’ read one dehumanising comment from a Georgian social media user.

The overwhelming majority of comments on Georgian social media attacked Harutyunyan’s appearance from a perspective that upheld traditional and sexist beauty standards. Many of the comments underlined the users’ beliefs that an appearance that deviates from traditional norms could be neither beautiful nor feminine.

‘How can someone have a relationship with her?’ read another comment, highlighting the widespread view that a woman’s worth and sexuality is tied to their value and subordination to the desires of men.

While misogyny was certainly a common sentiment in online discussions, there was also a pronounced trend of Armenophobia.

‘Armenians now have someone or something to be proud of’, one comment read.

‘Why does she overshadow the Milan Fashion week and not Ararat’, read another comment, notably combining both ethnic hatred and sexism.

But it was not just average Facebook users who worked themselves into an angry lather over the issue.

Framing his comments as a defence of freedom of speech, he began his post by writing: ‘Man, this Armenian model girl sure is ugly’.

He continued by stating that sharing this unsolicited opinion about Armine Harutyunyan was not, in fact, ‘bullying’ and that calling it as such was nothing more than ‘political correctness’ ‘gone wrong’.

He further wrote that by becoming a public figure she opened herself up to criticism.

‘Nobody entered the model’s personal space by going to her home in Tsakhnadzor [sic] and taking photographs’, his post read. ‘Her presentation was made public, with a message — see how beautiful and natural she is.’

Despite Gvaramia’s pretension that his post was a social critique, the reality is that it was simply another drop in a deluge of posts that help reproduce harmful attitudes within Georgian society.

Worse still, the post also exhibited a pernicious attitude towards the nature of freedom of speech.

Gvaramia presents himself as a liberal and as someone who stands for the rights of marginalised groups. However, his deployment of the term ‘political correctness’ to criticise what he perceives to be a limitation of freedom of speech creates the notion that liberalism and hateful opinions towards marginalised groups and people can co-exist — so long as such opinions are expressed under the aegis of ‘freedom of speech’.

Considering that Gvaramia is a public figure with a broad audience, his regressive comments have a significant social impact and are a failure on his part to exercise the role which he has carved out for himself, that of a liberal critic of Georgian society.

If he had been responsible and put thought into the matter, he might have written about the toxic norms, control mechanisms, and generally oppressive character of the fashion industry. Instead, he reproduced the body shaming and the anti-Armenian sentiments which are all too common in Georgia.

Gvaramia said Armine was from ‘Tsakhnadzor’, in an attempt to portray her as a ‘provincial’, a ‘villager’. The fact that he could not even spell the name of the town correctly (it is ‘Tsaghkadzor’, not ‘Tsakhnadzor’) combined with the fact that Armine is not even from Tsaghkadzor points to the lack of care and the non-progressive nature of his role as a public ‘progressive’.

While recent nationalist sentiments in Georgia have focused on socially excluding variously the LGBTQ+ community, migrants from the Middle East, and Muslims — the case of Armine Harutyunyan shows that xenophobia towards national minorities still has deep roots.

As ethnic minorities still face systematic and structural oppression in their everyday lives, it is incumbent upon the media and media figures to take up their role and responsibility as a pillar of a fair and democratic society and help stop such injustice instead of simply stoking the fires of hate. 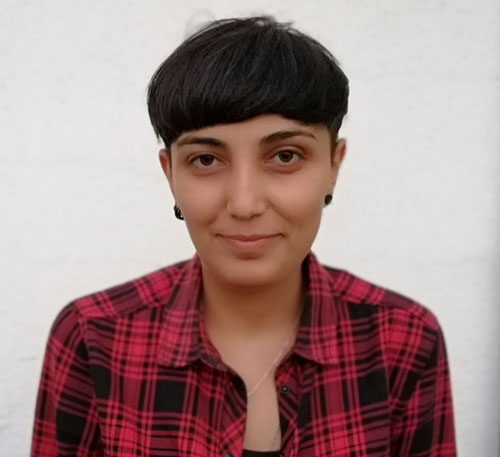 Alla is a gender researcher and activist. She has been a member of the Georgian Young Greens for five years and currently works for the Equality Movement as a project coordinator.