A by-election in Tbilisi’s Mtatsminda District will go to a second round after preliminary results showed no candidate gaining above 50% of votes.

Georgian Dream’s Vladimer Kakhadze gained 41% of votes and Shalva Shavgulidze of the European Georgia and Free Democrats bloc trailing on 37%.

Levan Ioseliani, an activist from the Civil Movement group led by 2017 Tbilisi mayoral candidate Aleko Elisashvili came in third with 7%.

Four-hundred-and-ten polling stations were open on Sunday with over 400,000 Georgians eligible to vote across Georgia to elect five mayors, eight municipal councillors, and one MP.

The Preliminary results showed Georgian Dream winning outright in all five of Sunday’s mayoral races, including a hotly contested contest in Zugdidi. In Zestaponi, Georgian Dream’s Giorgi Goglichidze came just above the threshold for winning in the first round, winning 50.75% of votes.

The mayoral race in Zugdidi, the capital of the west-Georgian region of Samegrelo, saw Sandra Roelofs, the Dutch-born wife of former president Mikheil Saakashvili, running against Georgian Dream’s Gega Shengelia.

Shengelia won 54% of votes according to preliminary results, compared to 43% for Roelofs.

Roelofs was nominated by the United Opposition — Power in Unity, a coalition of 12 opposition parties strongly dominated by the formerly ruling United National Movement. Her nomination on 22 March came several days after Saakashvili endorsed the party's 2018 presidential candidate Grigol Vashadze as the UNM’s new chair.

As polls closed at 20:00, the UNM claimed a ‘convincing victory’ in Zugdidi, and vowed to fight any electoral violations.

Later that day, talking to Rustavi 2, the UNM’s 2014 Tbilisi mayoral candidate Nika Melia appeared to move away from the party’s traditional leadership.

‘Many opposition politicians claim […] they are starting a revolution. The revolution is not happening and voters are becoming even more desperate. Reckless statements like these are unacceptable’, Melia said.

In an earlier statement, after the polls closed, third Georgian President Mikheil Saakashvili called the elections a ‘farce’ and said he supported Sandra Roelofs, who had threatened Georgian Dream with nation-wide protests if she did not win outright.

Following talks with Melia and other UNM leaders, Roelofs claimed she would ‘continue fight’ if there was a run-off.

After the polls closed, Tina Bokuchava, an MP from the United National Movement, was forcibly removed from a polling station in Zugdidi.

The Interior Ministry said they had detained six people and launched two criminal investigations related to violations at or near polling stations. They called for party activists to respect the law.

Gakharia, who later visited Zugdidi, accused the media of ‘attacking’ police and attempting to examine equipment in police pickup trucks. ‘What you did […] could be followed by the respective legal action’, Gakharia told one journalist.

The Central Election Administration (CEC) said they had received 89 complaints by 20:00, including 44 from Zugdidi and 21 from Marneuli.

During the day, the UNM accused the ruling party of having party ‘coordinators’ outside every polling station tracking if voters showed up using voter lists.

Responding to the accusations of ‘election fraud’ with ‘illegally obtained’ lists, Georgian Dreams General Secretary Kakha Kaladze made two media appearances insisting it was entirely legal. He doubled down by encouraging party activists ‘not to be intimidated by journalists’ that inquired about their activities and to keep doing their work.

Soon after, the Central Election Administration (CEC) intervened saying that they provided political parties and observer organisations with ‘a version of the voter list with photos’ upon request, based on Article 31 of Election Code.

They clarified that unlike ‘table voters’ lists’ that registrars use at polling stations to process voters, the version of lists released to political parties and observer organisations as public information ‘did not include voters’ personal data like ID number or registration numbers’.

During the briefing, CEC reminded voters they were not obliged to present their personal identification data with any observer at polling stations.

In his original statement, UNM’s Levan Bezhashvili alleged that lists used by Georgian Dream activists included their place of employment, their ‘supervisor’, and ‘other details’.

Following 2018’s presidential election, the OSCE observation mission criticised the practice of tracking voters outside polling stations, saying it could potentially influence ‘ability of voters to vote free of fear and retribution’.

At 15:00, the Interior Ministry said they had made five administrative arrests and launched two criminal investigations. In a press briefing, Deputy Interior Minister Natia Mezvrishvili called on party coordinators to respect the law near the polling stations and to obey police.

Levan Bezhashvili from the UNM insisted those arrested, including one minor, were their activists who ‘had tried to prevent fabrication’.

As well as in Zugdidi, mayoral elections were also held in Zestaponi and Chiatura, industrial towns in Imereti region, in Adjara’s Khulo Municipality, and in Marneuli, a city 20 kilometres south of Tbilisi with a large ethnic Azerbaijani population.

According to watchdog group the International Society for Fair Elections and Democracy (ISFED), one voter was seen putting four ballots in the box at one polling station in Marneuli before running away after being confronted.

CEC did not confirm the incident.

ISFED also complained that election observers were restricted from monitoring the voting at the same precinct in Marneuli.

On 19 May, European Georgia's mayoral candidate in Marneuli, Ahmad Imamguliyev, accused the spouse of Zaur Darghalli, Georgian Dream’s candidate, of bribing voters with rice and oil.

According to the preliminary results, Darghalli won 79% of the vote, followed by UNM candidate Agil Mustafayev on 11% and Imamguliyev on 8%.

Irakli Jorbenadze, the UNM candidate for Khulo's mayorship, was initially unable to vote on Sunday morning after discovering at the polling station he had left his ID card at home.

Several of the seats up for election were vacated after their former holders were involved in scandals.

The most prominent cases included the June 2018 arrest of Marneuli Mayor Temur Abazov after footage emerged appearing to show him forcing a man to wipe his own urine on his face for insulting officials from the ruling Georgian Dream Party.

Another scandal involved Zugdidi, where in September last year, Mayor Lasha Gogia and his deputy Gia Gulordava were arrested and charged for taking bribes.

The mining city of Chiatura lost its mayor, Paata Nadiradze, in September 2018 after he resigned following a restaurant fight with other officials.

‘Zugdidi and Adjara must be brought to a tipping point’

Around 13:00, Georgian Dream’s parliamentary chair Archil Talakvadze convened a press conference where he aired an audio recording of two ‘close associates of Saakashvili and Roelofs’ saying that whether UNM wins or loses, Zugdidi and Adjara must be ‘brought to a tipping point’.

Talakvadze said they expected ‘provocations’ from the opposition and that the recording has been sent to police.

Nika Gvaramia, director of the opposition-leaning TV channel Rustavi 2, was personally reporting from Zugdidi. He announced on the day of the vote that a ₾1,000 ($360) reward would be given to anyone who could provide proof that someone had attempted to buy their vote or proof of any other involvement in fraud or voter pressure.

At one point, Gvaramia, who moved throughout Zugdidi with several bodyguards, was confronted and shouted at by a group of angry men. He accused Georgian Dream of a ‘provocation’.

Turnout in Tbilisi’s Mtasminda District was the lowest of the day at just 34%.

The election in Tbilisi was for the single-mandate parliamentary seat — one among 73 majoritarian mandates — that was vacated by independent MP Salome Zurabishvili in order to run for president.

Twenty candidates were registered on the ballots in Mtatsminda, with Georgian Dream's Vladimer Kakhadze, a physician, and Shalva Shavgulidze of the European Georgia and Free Democrats bloc seen as the frontrunners.

‘I am sure Mtatsminda voters will make the right choice between justice and injustice’, Shavgulidze told journalists after coming out of a polling station early in the day.

Shavgulidze is a prominent lawyer who replaced Irakli Alasania as leader of the Free Democrats party in early 2017 after the party failed to win any seats in 2016’s parliamentary elections. The UNM did not field a candidate in Mtatsminda District as a quid pro quo for European Georgia not contesting Zugdidi’s mayoral election.

Shavgulidze is known for taking the high profile murder case of Sandro Girgvliani to the European Court of Human Rights, the verdict of which undermined claims of abuses of power under Saakashvili in 2011.

He was criticised by Kakhadze and other members of Georgian Dream for allying with former UNM officials in European Georgia who were ‘responsible’ for human rights violations like Girgvliani’s case.

‘The swamp, the one that dared to tell us that an executioner is a victim, must end’, fourth Georgian President Giorgi Margvelashvili stated after voting in the morning.

Margvelashvili, who fell out with Georgian Dream and its leader Ivanishvili soon after his election in 2013, referenced the ruling party’s recent suggestions that judges that made controversial rulings during Saakashvili’s rule were victims of his power.

The chair of Georgian Dream and former Prime Minister Bidzina Ivanishvili voted earlier at Mtatsminda District in Tbilisi, shortly saying to media afterwards that he was confident in his party’s win in all the day’s elections ‘with a big advantage’.

However, he added that ‘runoffs are possible in two districts’, without specifying which.

Ex-President and former UNM head Mikheil Saakashvili, who is currently outside Georgia and wanted on several counts of abuse of power, was active throughout the day, addressing party supporters and their opponents through Facebook live video broadcasts.

Georgian President Salome Zurabishvili shared one of Saakashvili’s live video recordings to her personal Facebook page, reprimanding him for saying that he ‘wouldn’t wait six months for electoral observers’ if the voting was rigged.

‘Calling for disorder and unrest is an offence to the state, a crime when your territory is occupied!’, she wrote. 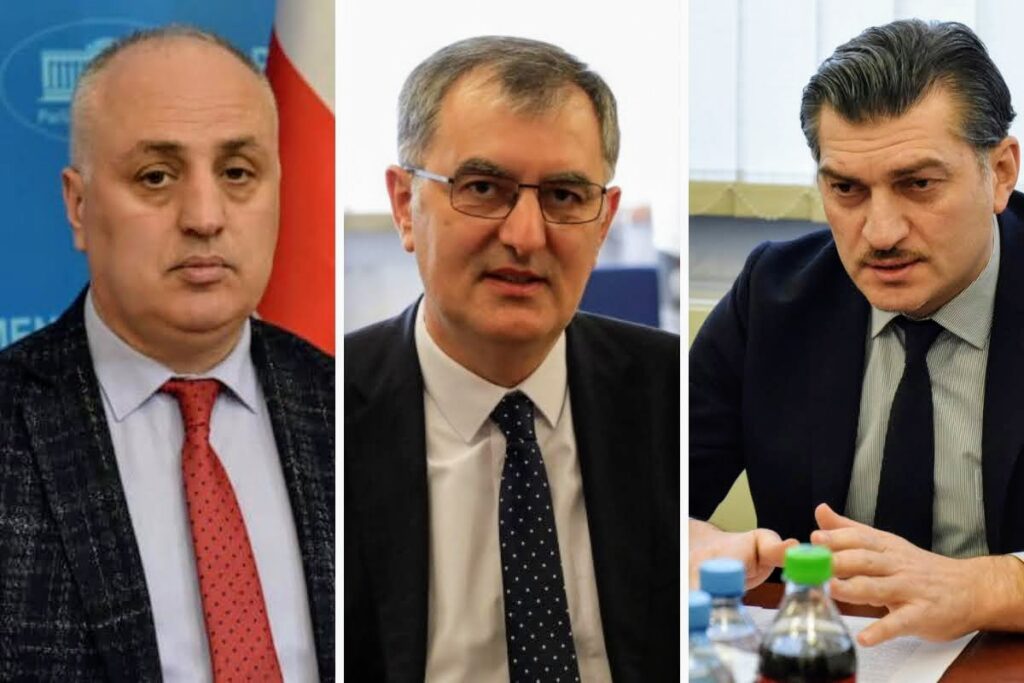