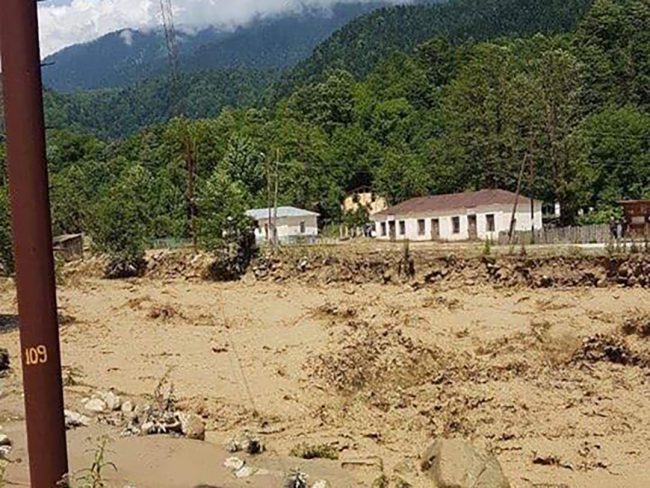 Several villages were flooded in Chuberi, in Georgia’s historic Svaneti region on Thursday after the river Nenskra swelled, reportedly due to a landslide. Videos posted online showed muddy waters destroying bridges and flooding houses. Several bridges were washed away, cutting off ten villages. Despite speculation from local people, the company constructing the Nenskra Dam on the river has denied their work was connected to the flooding.

The Emergency Services said on Thursday that nobody had been reported injured. Their statement said they were working on the ground to combat the flood.

The trustee of Chuberi, Nino Vibliani told IPN that 10 villages in the Chuberi Valley were cut off and and five bridges had been destroyed. She said the population had already been evacuated.

The flood has revived discussions on whether construction of the Nenskra hydropower plant on the river is justifiable.

‘There was heavy rain yesterday. The Nenskra flooded and came with a strong force. The water level is not rising right now. Unfortunately, they are going to build the Nenskra dam on this river’, Zaza Vibliani, a local resident and member of Mestia Municipality Assembly told Liberali.

Nenskra Hydro, the company building the dam, denied the construction has anything to do with the flooding adding that ‘preparatory work has been completely put on hold since the start of 2018’.

‘This work only consisted of rehabilitation of existing roads and bridges. Besides, the natural disaster developed 5 kilometres below the construction site in the direction of the river. Therefor, the current situation has nothing to do with the construction of the Nenskra dam’, their statement said.

The Nenskra project includes a planned 130-metre high dam on the River Nenskra, a 3 square kilometre reservoir, and a 280-megawatt hydropower plant in Mestia Municipality. The project launched in 2015 and has since faced numerous protests by local people and rights groups.

Local people have held numerous demonstration against the dam’s construction. On 26 April dozens gathered in the village of Chuberi to once again protest against the construction of the dam. Protesters said it posed a threat to the people, culture, and environment of Svaneti, and vowed to prevent construction from going ahead.

[Read more about the protest in Chuberi on OC Media: Video — Dozens protest in Svaneti village against hydropower plant]

They plan to raise 70% of the $1.1 billion cost of the project from international financial institutions. The EBRD is to cover $214 million, 20%, while both the European Investment Bank (EIB) and the Asian Development Bank are considering financing the project.

In 2017, local environmental group Green Alternative filed a complaint with the EIB claiming that the assessment of natural geological hazards connected to the Nenskra project was ‘inadequate’; the EIB is still considering the complaint.

Green Alternative has claimed that the environmental and social impact assessment of Nenskra failed to recognise Svans as indigenous peoples, and argued that this judgement is ‘arbitrary and contrary to the United Nations’ definition of indigenous peoples’.

In addition, the ESIA concluded that only 80 families in two gorges would be ‘directly impacted’ by the project and that therefore the social impacts are not significant, the Green Alternative reported.

They estimate the project’s impacts will be ‘much broader and encompass segments of the population for which the social consequences have not been accounted for, such as women, the elderly, and internally displaced people’.

According to the Green Alternative, the project will flood up to 267 ha of forests and communal lands in adjacent areas.

Additionally, an 8.7-metre high dam and 12.4-kilometre diversion tunnel will be built to bring water from the Nakra to the Nenskra reservoir, which, Green Alternative claims will ‘considerably reduce the environmental flow of the Nakra river, leaving just 10 percent of average annual flow downstream regardless of seasonal fluctuations’.