`Shoppers surge after state of emergency declared in Georgia

`Shoppers surge after state of emergency declared in Georgia

Georgia’s parliament has voted to approve the state of emergency declared by President Salome Zurabishvili earlier today. Parliament also approved the president’s decree limiting the constitutional right to freedom of movement, freedom of assembly, and access to public services.

The measures were voted for by 115 MPs, with only two voting against.

Several MPs expressed concern that churchgoers would be deprived of the right to gather in the church.

Emzar Kvitsiani of the Alliance of Patriots Party suggested the state of emergency, end before Easter, cutting it 10 days shorter.

The State Commission implementing and overseeing Armenia’s emergency response has announced that several business establishments will be forbidden from operating from Sunday until the end of the state of emergency to prevent the spread of the coronavirus in the country.

Two people in the Russian republic of Kabardino-Balkaria who recently returned from abroad have been diagnosed with COVID-19, the head of the republic, Kazbek Kokov has confirmed. 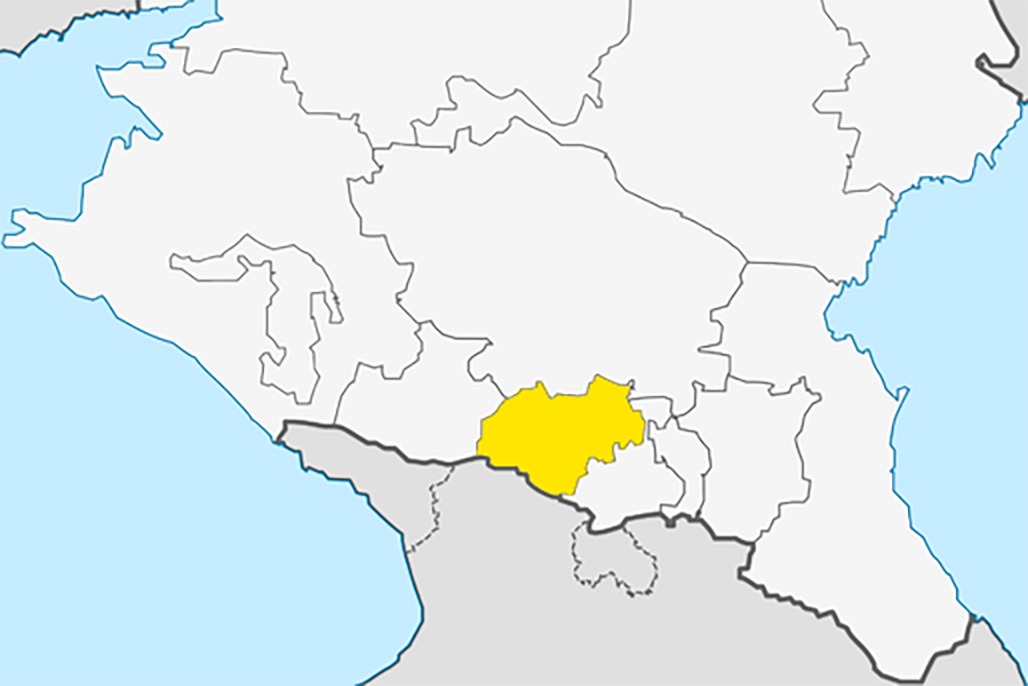 Those who came into contact with the infected people are being isolated and remain under the supervision of doctors, Telegram channel Patriot KBR reports.

The Aukh Public Council of Dagestan’s Akka Chechens has decided to postpone a rally calling for the restoration of the Aukh District due to coronavirus.

The rally was to be held tomorrow. The Ministry of Justice of Dagestan has previously denied permission to the council to hold a rally.

Shoppers surge after state of emergency declared in Georgia

The minister of Agriculture of Georgia, Levan Davitashvili, has reiterated that freedom of movement has not been restricted by the state of emergency, commenting on the surge of shoppers.

‘What’s currently happening in the shops is totally unacceptable. This creates problems for the supermarkets’, said Davitashvili, adding that some products may disappear from shelves for several hours, which is ‘groundless, because stocks are in place’.

‘The risks of epidemics grow in such crowded conditions’, said Davitashvili.

Azerbaijani banks and companies have transferred millions of manats to the state fund to support the fight against Covid-19, founded by Azerbaijani President Ilham Aliyev on 19 March.

Some have transfered over a million of manats.

Services in Tbilisi’s Sioni Cathedral have continued to go ahead as normal despite the government banning gatherings of 10 or more people.

Prime Minister Giorgi Gakharia clarified that the ban would include churches.

Anyone caught violating the state of emergency could face fines of up to ₾3,000 for individual or ₾15,000 for companies or organisations. Repeat offenders could face up to three years in prison.

The Georgian Orthodox Church published the protocol of yesterday’s Holy Synod’s meeting earlier today — after the state of emergency was declared.

The Holy Synod decided in the meeting not to change the practice of using a common spoon for Holy Communion despite warnings from health officials that it could spread the coronavirus.

Several Church officials told journalists that the announcement of a state emergency was unexpected for them.

The Headquarters under the Cabinet of Ministers reported that nine more people have been infected with Covid-19, bringing the total to 53.

North Ossetia’s Health Minister has become the first health minister in the North Caucasus to give a coronavirus briefing on Instagram.

Other measures announced in the republic include that Friday sermons in the Sunni mosque of Vladikavkaz will be limited to 10 minutes instead of the usual 30 minutes from next week.

A woman who returned from Italy to North Ossetia has tested negative for COVID-19.

The Human Rights Education and Monitoring Centre (EMC), a local rights group, have said they believe the declaration of a state of emergency in Georgia was a response to the Georgian Orthodox Church.

Yesterday, the Church’s ruling body, the Holy Synod, decided not to change the practice of using a common spoon for Holy Communion despite warnings from health officials that it could spread the coronavirus.

In their statement, EMC said the Holy Synod’s decision put the public’s health at risk and openly contradicted public order.

They also criticised the Church for lacking ‘solidarity’.

‘The decision of the Holy Synod lacked solidarity. Among other things, it failed to mention the needs of groups doing even worse because of the current situation, such as homeless people, workers, the elderly, people with disabilities, unemployed people, and tens of thousands of those left without a minimum income.’

The group said the Holy Synod’s decision put the Church in open competition with the state and was a bid to strengthen its own power.

EMC called on the government to negotiate with the Church authorities to prevent willful gatherings and resistance to state restrictions on religious motives.

It also called on religious figures to follow restrictions put in place and to prevent gatherings in churches in a bid to save the lives and the health of their followers and others.

The press service of the office of the mayor Nalchik, the capital of Kabardino-Balkaria, has reported that the weekly agricultural weekend market on Abkhazia square was cancelled.

At the market, villagers usually have the opportunity to sell their produce directly to consumers. Meanwhile, the city markets ‘Dubki’ and ‘Zelyoniy’ where retailers buy wholesale from the villagers continue to function without restrictions.

Georgian President Salome Zurabishvili has declared a state of emergency across the country to help prevent the spread of the coronavirus.

‘I have made the decision to declare a state of emergency across the whole territory of Georgia. The decision comes to force immediately’, Zurabishvili said.

‘I will also issue a decree restricting rights guaranteed by the constitution, including freedom of movement, freedom of assembly, and access to public services.’

Read the full story: Georgia to declare state of emergency

Georgia to declare state of emergency

The Georgian government is to appeal to the President to declare a state of emergency across the country later today.

According to Georgia’s constitution, a state of emergency grants the president — with the agreement of the prime minister — the right to issue decrees restricting a number of constitutional civil rights.

These include the rights to liberty, freedom of movement, privacy and private communication, free media, public information, and private property.

Read the full story: Georgia to declare state of emergency

Head of Karachay-Cherkessia promises to provide masks and antiseptic

The head of the Russian republic of Karachay-Cherkessia, Rashid Temrezov, promised to provide all the republic's pharmacies with face masks and antiseptic agents by the end of March.

There have been chronic shortages of both in Karachay-Cherkessia and Kabardino-Balkaria, and a number of local residents have turned to making improvised masks or going without.

According to the state of emergency, social media users and media outlets face fines for posting unverified news and information on the spread of the virus.

Media outlets and individual users online were previously only allowed to refer to reports on the spread of the virus from the State Commission implementing and overseeing Armenia’s emergency response.

The new amendments will also allow people to refer to comments by public officials, heads of state and government bodies, and international organisations accredited in Armenia.

The National Assembly also discussed amendments that would introduce administrative or criminal liability for those who do not comply with the requirements of quarantine or self-quarantine.

The bill includes possible imprisonment from three months to five years, depending on how many people are infected with the virus as a result of breaking quarantine.

The bill was passed during its first hearing; the second hearing will take place on Monday.

The Armenian Unified Infocenter announced this morning that an additional 24 cases have been confirmed in the country in the last 24 hours, bringing the total number to 160.

Asymptomatic cases were already being treated in other hospitals.

Torosyan claimed the number of hospitals being used to treat the virus was likely to increase. However, he said the strategy in dealing with the virus would probably change, taking into account the extent that hospitals could be overwhelmed with coronavirus patients.

According to Torosyan, 11 of those diagnosed with the virus are also suffering from pneumonia. He said that three of them were in intensive care that their condition was not life-threatening.

Torosyan said that there will come a point when they will no longer be able to isolate patients and all those they have come into contact with.

There are currently over 600 people in quarantine in different regions of Armenia and, according to Torosyan, the country is nearing the end of its capacity of quarantining people. The state will soon resort to self-isolation.

Azerbaijan’s Pasha Holding has allocated €3 million to create a laboratory to detect the coronavirus in Azerbaijan.

The multi-billion-dollar firm has also donated ₼2 million ($1.2 million) to the state fund to support the fight against COVID-19. The fund was created on Thursday by President Ilham Aliyev.

Pasha Holding, which operates in multiple sectors including banking, insurance, construction, and manufacturing, is owned by the family of First Lady and Vice President Mehriban Alyievea.

The company, which also owns the Port Baku Towers and Port Baku Mall, has announced it is providing tenants of its shopping malls with a discount on rental payments for March and April, ‘in order to maintain business sustainability, and prevent or minimise job cuts’.

Welcome to OC Media’s coronavirus live updates for Saturday, 21 March. We will be bringing you the latest news on the COVID-19 pandemic around the Caucasus.

Georgia grounded all flights in and out of the country except for those operated by Georgian Airways. Georgia banned entry to foreign citizens on 16 March.

After deliberating for over 8 hours the Georgian Orthodox Church’s ruling Holy Synod decided not to change the practice of using a common spoon for Holy Communion, despite warnings from health officials.

Despite no cases of the virus being confirmed in the North Caucasus, telegram channel ‘SKFO Telegraph’ reported that 1,600 people are under quarantine.

Russia pledged to send more medical aid to Abkhazia to counter the virus.