Researchers often talk about the importance of policies and political leaders, with the importance of each dependent on the political culture of an electorate. So what are the most important factors for people in Georgia when deciding who to vote for?

This issue came to the forefront with the arrival of Mikheil Saakashvili in Georgia ahead of the first round of the 2021 local government elections. Whether this ultimately affected the election results is actively discussed.

While the impact of Saakashvili’s arrival will likely remain unclear, data from an August 2021 ISFED survey, which CRRC Georgia carried out, shows that while policy matters to voters, political leaders are the most important factors in voters’ minds when deciding who to vote for.

The August 2021 ISFED survey on election-related processes shows that around a third of the population see a party’s electoral platform and promises as the most important factor when deciding who to vote for. A similar share reported the same about trust in the leaders of political parties. Every fourth person mentioned trust in specific members of the party as important. Fewer people mentioned the parties’ past performance or the political opinion of other people. 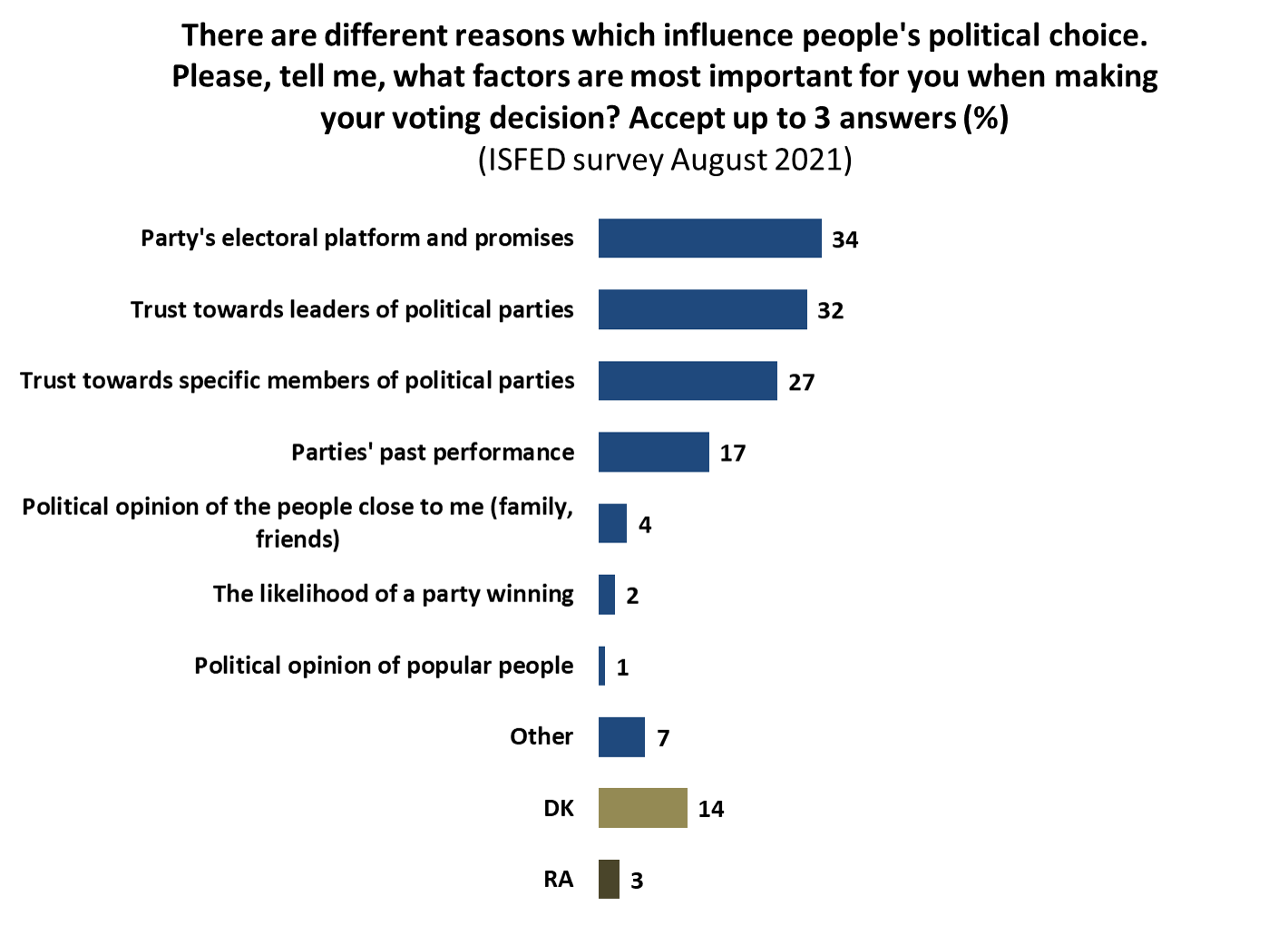 A regression analysis shows that the only factor that predicts whether trust in party leaders is the most important factor for someone is which party they support.

People who support the Georgian Dream or an opposition party are 1.3 and 1.4 times more likely to say that trust in the leaders of a political party is an important factor when choosing who to vote for compared with people who do not report that they support a party. 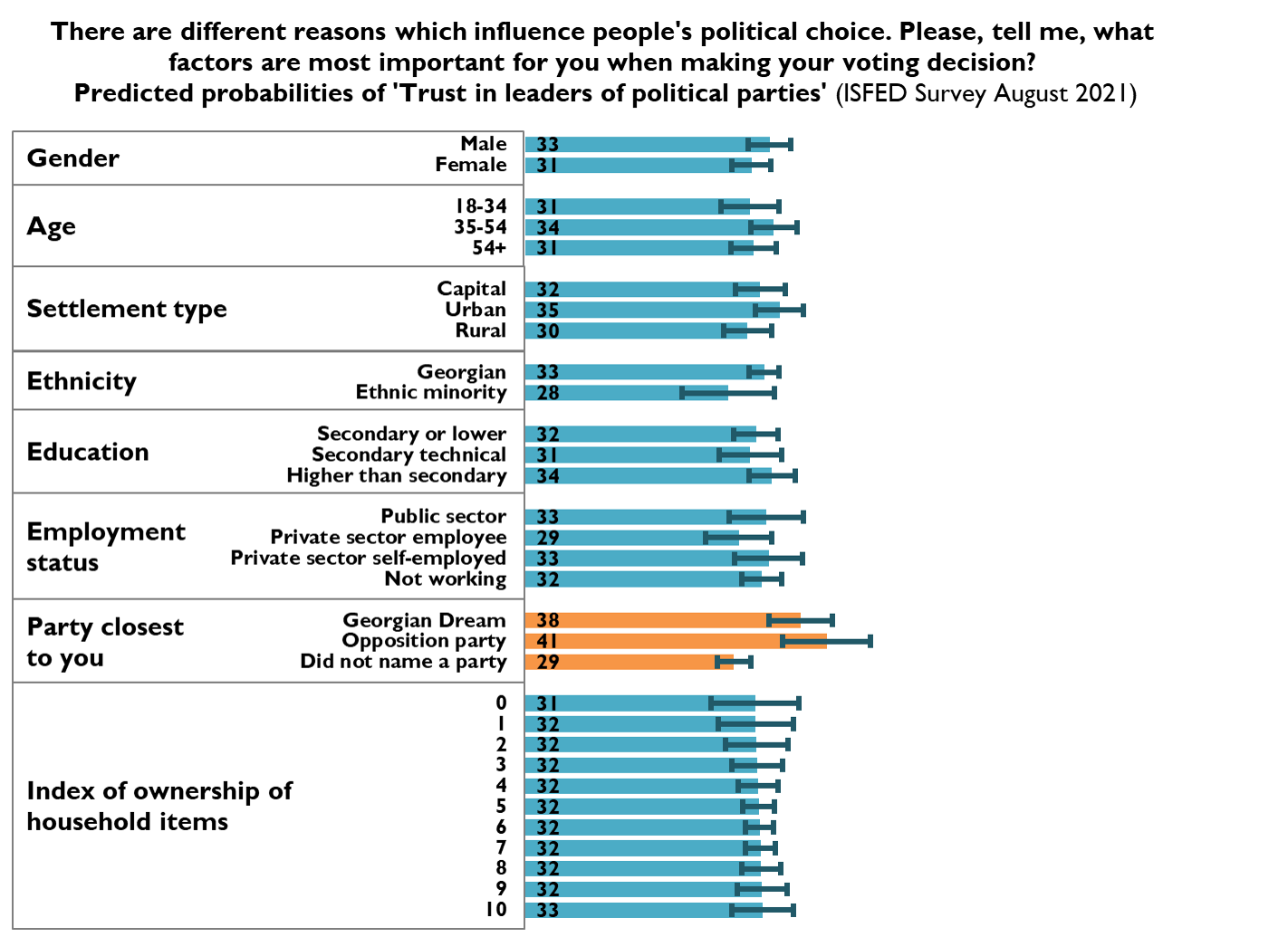 Whether someone names a party’s electoral platform and promises varies by a number of characteristics as well.

People with higher than secondary education were 1.2 times more likely to mention a party’s electoral platform and promises as important than people with secondary or lower education.

People who are not working and people who are employed in the public or private sectors were 1.2 times and 1.4 times, respectively, more likely to mention platforms and promises than self-employed people.

Georgian Dream supporters were 1.2 times more likely to name a party’s platform and promises as important when deciding who to vote for compared to people who do not name any party.

There were no significant differences in terms of gender, age, settlement type, ethnicity, or economic situation, controlling for other factors. 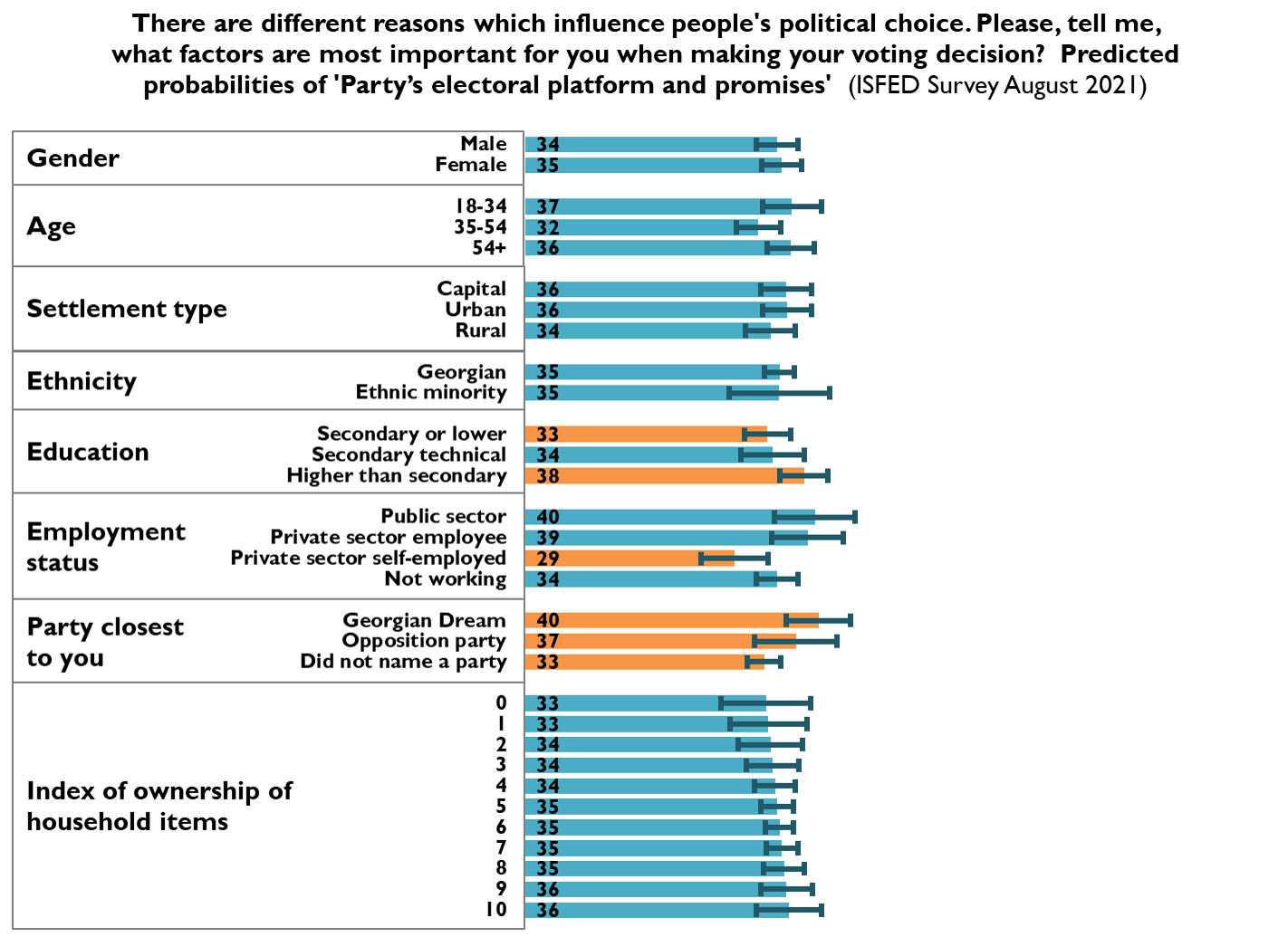 While trust towards the party leaders and a party’s promises were the most important factors, when faced with a choice between the two, people leaned towards trust in leaders.

A number of variables predict which direction people lean in. A regression analysis showed that ethnic Georgians were 1.5 times more likely to choose leaders over promises compared to ethnic minorities.

Lastly, the wealthier a person’s household, the more likely that person was to agree that who the party leaders are is more important.

There were no significant differences between people of different genders, ages, settlement types, education levels, or employment statuses, controlling for other factors. 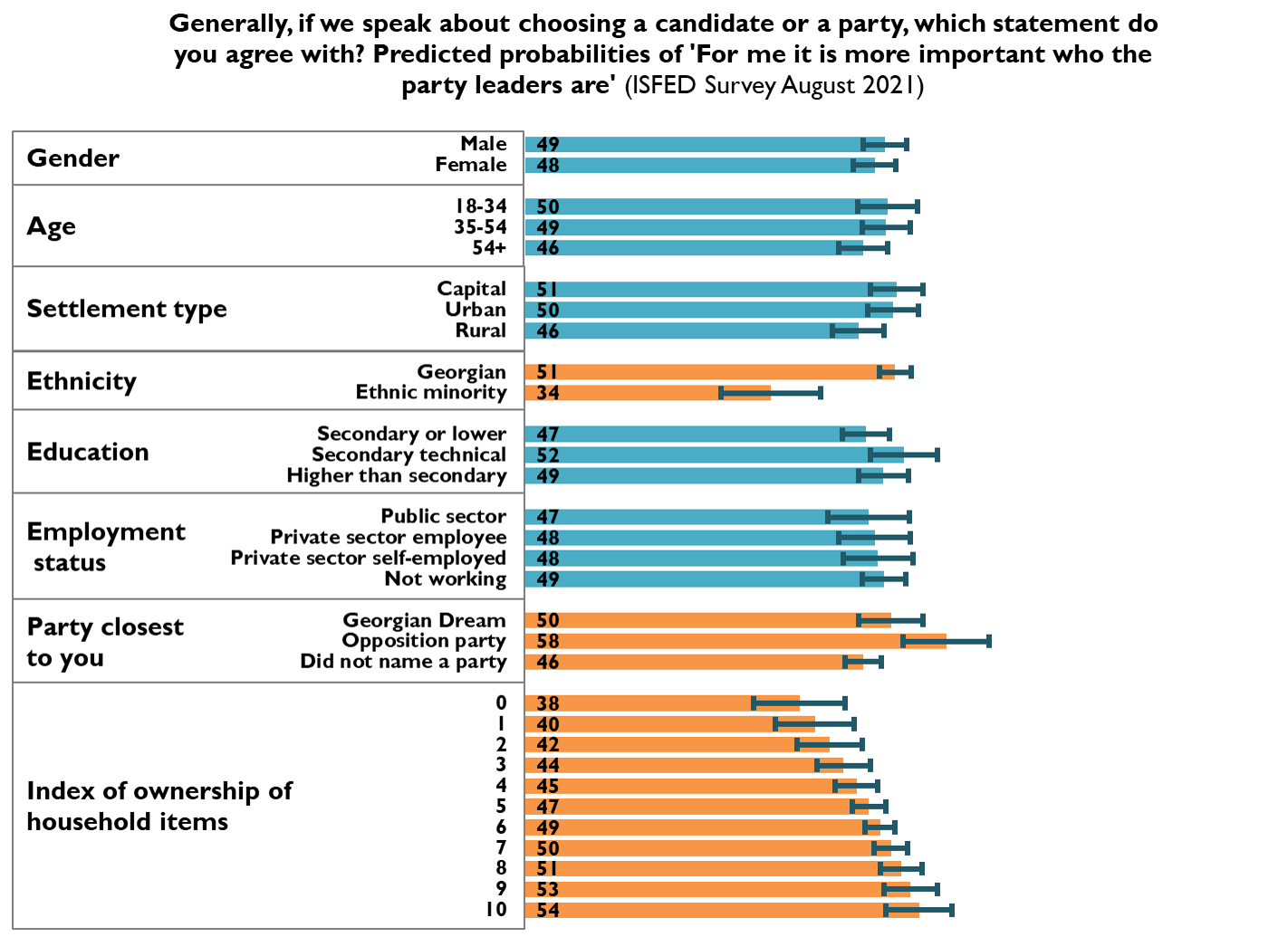 People deem a party’s programme and promises as well as  party leaders important. However, people tend to place more emphasis on leaders. Georgian Dream supporters were more likely to name a party’s electoral platform and less likely to choose leaders over promises. Opposition supporters are most likely to name trust in leaders as most important. Ethnic minorities seem to care less about the leaders compared to ethnic Georgians.