After an initial outbreak in Spring, Armenia, Azerbaijan, and Georgia are once again facing rising coronavirus case numbers.

Georgia braces for strictest curbs as numbers ‘mount to Everest’

The day before new and stricter anti-COVID-19 measures came into force on Saturday, medical authorities have registered a new record-high of 4,780 new cases within the previous 24 hours.

The government’s recently announced plan to curb the spread of the infection, accompanied by some promises of financial assistance for the most vulnerable, found little support among opposition political groups, who have warned it would hit the country’s economy hard.

The phased plan which will last until February includes substantial restrictions on public movement and economic activities, offering a 10-days window bringing back public transport, malls, and markets for the New Year’s Eve shopping, and relaxed rules again in the second half of January.

Georgia is battling with the most significant challenge from the coronavirus amid a post-election crisis.

While major opposition groups have not announced any plans for street demonstrations over what they insist was a ‘rigged’ parliamentary vote, they lambasted Vice Prime Minister Maia Tskitishvili, who on 24 November alleged their ‘irresponsible’ street demonstrations contributed to the high COVID-19 numbers.

Since early September, following an internationally praised initial response to the pandemic in Spring, Georgia has witnessed a steady rise in infection numbers, something that has brought the country’s healthcare system to the brink of collapse.

‘We are ascending to Everest now’, NCDC Deputy Director Paata Imnadze told journalists today, adding that he expected the numbers to stabilise no sooner than two weeks after the lockdown comes into force. 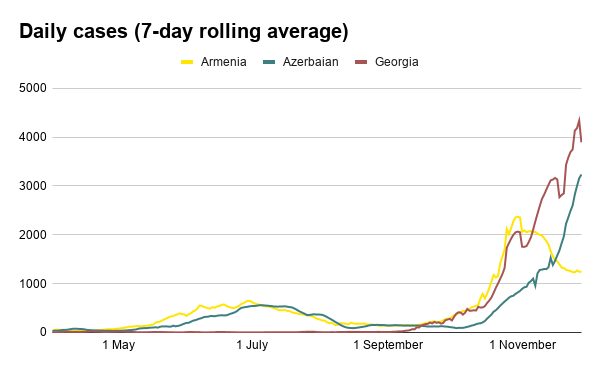 The government, however, has strongly disputed that any of the measures they have enforced since lifting the state of emergency in late May have constituted a ‘lockdown’ — semantics that could have legal ramifications.

Rights groups have been critical of the authorities for overreaching their powers by restricting fundamental rights through decrees, without parliamentary oversight and potentially in breach of the constitution.

According to Azerbaijani authorities, on 27 November, 3,712 people were infected and 1,359 recovered from coronavirus over the past day, 16,402 tests were carried out, and 35 people died.

The total number infected throughout the outbreak now stands at almost 110,000, with 70,000 recoveries. Almost 1,300 people have died in Azerbaijan.

The authorities have temporarily stopped testing asymptomatic contacts of those infected, because the large number of daily tests was causing delays in obtaining results. 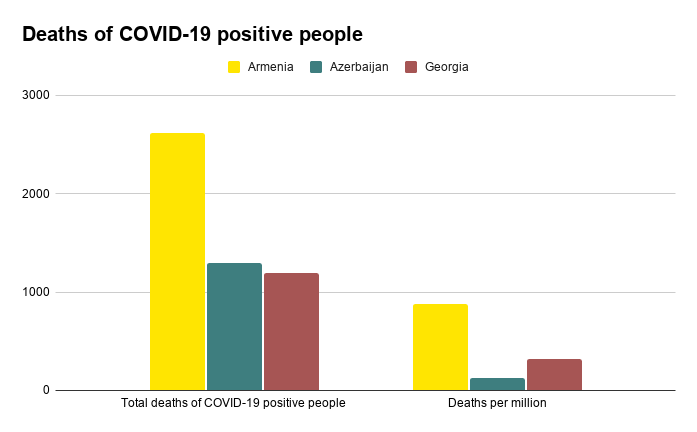 Criminal cases are being launched against anyone COVID-19 positive who breaks the strict quarantine rules.

The press service of the Ministry of Internal Affairs has stated that it is forbidden to take off a mask in order to smoke, drink water, or eat while in crowded places, including in the open air, in front of ATMs, and in queues. Not following this new rule will result in a fine of ₼100.

Taking into account the increase in the number of infected people, the Baku City Executive Power has carried out disinfection of main streets, avenues, and roads in the capital, as well as in the villages of the city.

According to Armenia’s National Centre for Disease Control (NCDC), recent observations have shown that in the past two weeks, the number of COVID-19 cases are especially high in the capital Yerevan and in the province of Kotayk.

Armenia’s coronavirus numbers spiked by 113% in October during the war in Nagorno-Karabakh, due not only to the fighting but also volunteer efforts, an influx of displaced people from Nagorno-Karabakh, and funerals.

According to Romella Avoyan, Head of the Department on the Prevention of Non-Contagious Diseases at the NCDC, within the past two weeks the number of new coronavirus numbers has decreased by 33%.

According to Avoyan, this is due to the end of the fighting, displaced people no longer entering Armenia, and the fact that schools are now open after a 4-week break only for grades 1-4 and grade 12. The rest, as well as universities, have all gone online.

According to the Director of the NCDC Gayane Sahakyan, in October, the country was registering 2,000 cases daily. However, in the past week, it has been registering 1,300–1,400 cases daily (nearly 41% of conducted tests).

There has also been a decrease in the number of patients waiting to be hospitalised. According to Health Minister Arsen Torosyan, while during the war there were over 800 coronavirus patients waiting to be hospitalised, in the past week, this number has dropped to around 350. However, Torosyan has stated that this has still not alleviated the burden hospitals are under.

Armenia declared a state of emergency on 16 March which was lifted on 11 September. Since then, a nationwide quarantine has been enforced which will last until 11 January. Restrictions under quarantine include wearing masks in all indoor and outdoor spaces, maintaining social distancing of 1.5 metres apart, family and entertainment events and ceremonies (weddings and baptisms) are allowed with a maximum of 60 participants.

Protests and strikes are allowed with certain conditions, such as obtaining official permission. However, due to the state of martial law declared in the country on 27 September, protests are altogether banned until martial law is lifted.

On 21 November, Russia’s Health Ministry transferred the first samples of its Sputnik V vaccine. According to Torosyan, the vaccine will be tested on volunteers.

5. Datablog | Young people in Georgia want the government to focus on education