Armenian Prime Minister Nikol Pashinyan and Azerbaijani President Ilham Aliyev have agreed to a peace deal to end the war in Nagorno-Karabakh.

According to the deal, Armenia will hand control of several territories to Azerbaijan but the final status of Nagorno-Karabakh is undefined.

Read all of our coverage of the war including our Voices for Peace series.

The Azerbaijani Prosecutor General’s Office has opened a criminal investigation into a group of people from Abkhazia who they said took part in the war on the Armenian side.

‘At the urging and leadership of Seyran Kocamanyan, Galust Trapizonyan and others living in Abkhazia, Georgia, more than 20 people met with the leaders of the so-called “Nagorno-Karabakh” regime in October 2020 and discussed their participation in hostilities’, they said in a statement.

They said they were bringing charges of aggressive warfare, premeditated murder by a criminal organisation, and illegal border crossing against the group.

Azerbaijani officials have announced that local branches of Azerbaijan's State Security Service (SSS) have started operating in Jabrayil (Jrakan), Zangilan (Kovsakan), Fuzuli. The Shusha (Shushi) city office of the SSS has been established and will reportedly be operational in the coming days.

Azerbaijan’s Ministry of Internal Affairs has stated that the relocation of the Shusha Police Department to the city has started. Azerbaijan’s mobile telecommunications company Azercell has also reportedly  installed a 4G network in the city. 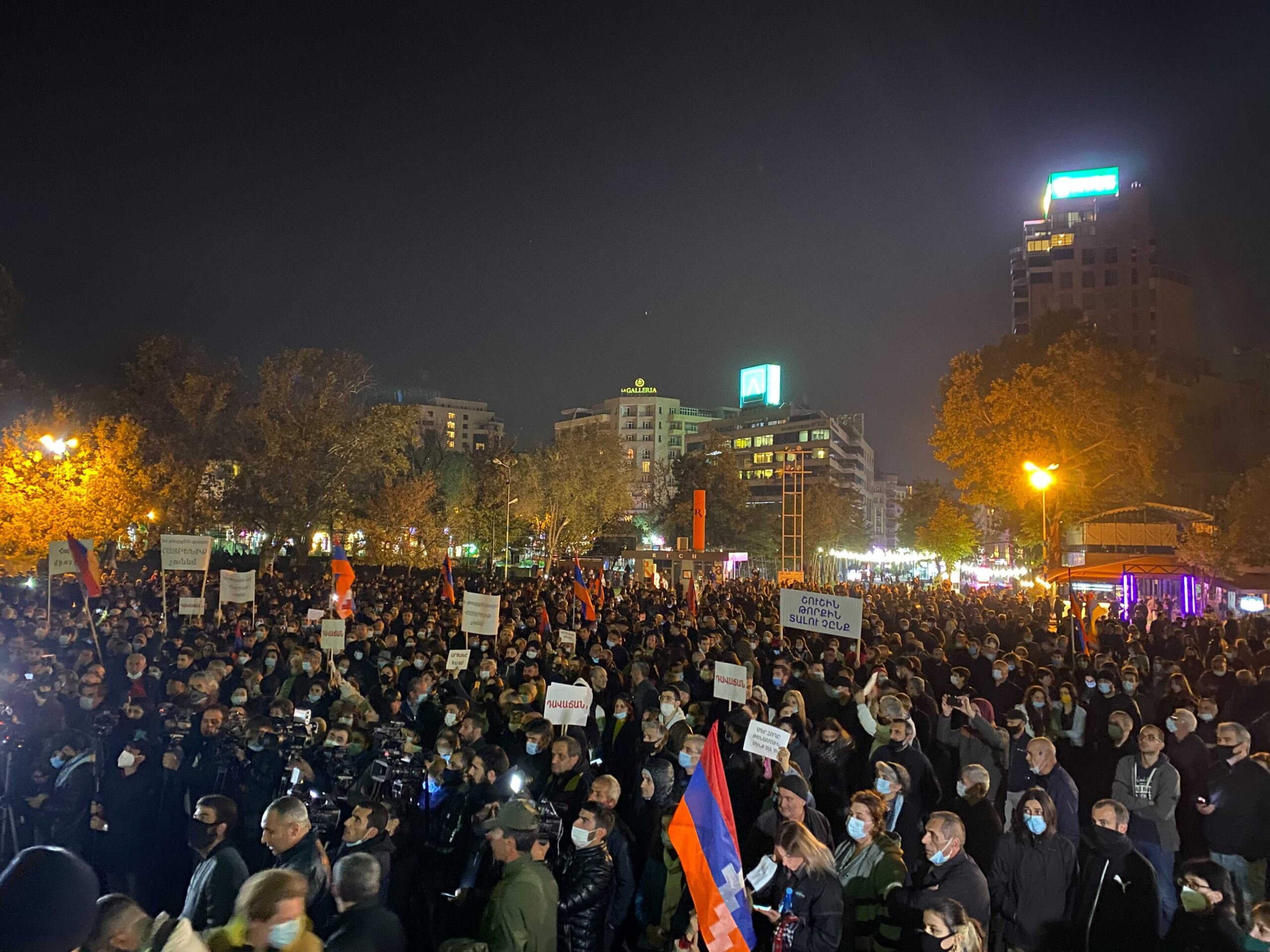 A small protest organised by the opposition Sasna Tsrer party at Yerevan’s Freedom Square was dispersed by police.  A number of protestors were reportedly detained.

A separate, larger protest against is currently taking place in another part of the city.

Armenia’s only two opposition factions in parliament have said they want to remove the Armenian Prime Minister from office, but how would that look in practice?

Read more: Could the opposition oust Nikol Pashinyan through parliament?

A protest by Armenian opposition supporters who demand the resignation of Armenian Prime Minister Nikol Pashinyan and have criticised the recent peace deal is taking place in central Yerevan. At the moment, the protest is several hundred strong and there is a very heavy police presence.

In an interview with Russian news channel RBC, Azerbaijani Ambassador to Russia Polad Bulbul Oglu, said that Turkish peacekeeping efforts will be limited to a joint Russian-Turkish monitoring centre located on the territory of Azerbaijan.

Reproduced below are key translated excerpts from an address given by Armenian Prime Minister Nikol Pashinyan this morning.

On the peace deal:

‘Russian peacekeepers will ensure the stability of the road connecting Stepanakert and Yerevan, including part of that road near Shushi (Shusha).’

On the road connecting Azerbaijan to Nakhichevan through Armenia’s Province of Meghri:

‘Meghri will not be surrendered.  All we are talking about is the opening of regional transport communications. This means unblocking transportation routes from Azerbaijan to Nakhijevan and from Yerevan to Syunik through Nakhijevan, including the railroad to Iran. which can have an important impact on our country’s future economic development.’

On reconstruction in Nagorno-Karabakh:

‘Residents of territories in Karabakh which remain under the control of the Armenian forces and where Russian peacekeepers will be stationed, have to return to their homes as soon as possible. The authorities of Armenia and Artsakh (Nagorno-Karabakh) will do everything possible to restore what was destroyed and create all the conditions for life.’

On the status of Nagorno-Karabakh:

Russia and Turkey appear to disagree on peacekeepers

The text of the peace agreement that has been published by the Kremlin does not make any mention of Turkish peacekeepers being present in the disputed region.

The internet in Azerbaijan, which has had severe restrictions on it since the beginning of hostilities, has been unblocked as of today.

Armenian opposition groups, which had staged a protest yesterday criticising the peace deal and calling for the resignation of Prime Minister Nikol Pashinyan have announced a new protest today for 17:00.

Yesterday, parliamentary opposition parties Bright Armenia and Prosperous Armenia attempted to hold an extraordinary session of parliament, the attempt failed as a quorum was not reached.

Martial law is still in effect in Armenia and mass gatherings remain prohibited.