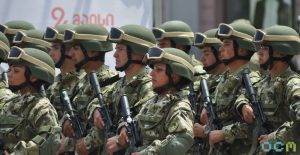 Serving in the army must be mandatory for women as well, according to a legislative proposal being put to the Parliament of Georgia, which would change the law that currently obligates only men to join compulsory military service.

The proposal was registered on 30 January 2017 to the Parliament’s Defence and Security Committee by Irina Barbakadze, a 29-year-old woman from the Georgian town of Rustavi.

Barbakadze argues that Georgia’s law on gender equality must ensure equality on ‘every basis of daily life’, and women need to be obliged to join the army as well. In order to legitimise her legislative proposal, Barbakadze refers to three famous female historical figures, who all contribute to the national identity of Georgia:

According to the documents she provided to parliament, the legislative proposal, if enacted, will ‘strengthen the army and guarantee the territorial integrity of Georgia’.

According to parliamentary procedures, a legislative proposal is defined as a ‘well-reasoned address submitted to Parliament by a subject, not having the right to launch a legislative initiative’. In five days time, after the registration of the proposal, the Parliamentary Speaker or bureau delivers the paper to the committee. After receiving it, the Defence and Security Committee is to discuss the proposal in the next 30 days. If the legislative proposal is accepted, the leading committee will be responsible for launching a legislative initiative, which can result in consideration of a draft law by parliament.

The current legislation in Georgia obligates men aged 18–27 to undergo compulsory military service. On 27 June 2016, former defence minister Tina Khidasheli signed a document that abolished compulsory military service in the Defence Ministry. The document, however, could not abolish compulsory service throughout the country, and it applied to only around a quarter of recruits. The Ministry of Internal Affairs and the Ministry of Corrections and Legal Assistance were still sanctioned to recruit ‘soldiers’. Soon after, Khidasheli was replaced by Levan Izoria in November 2016, who reversed his predecessor’s decision.