The Armenian Government claims to have shot down four Azerbaijani drones

French journalists injured from shelling on the city of Martuni

The Armenian Government claims to have shot down four Azerbaijani drones

French journalists injured from shelling on the city of Martuni

Fighting between Armenian and Azerbaijani forces in Nagorno-Karabakh is continuing for the fifth day.

[The news as it happened: Sunday and Monday, Tuesday, and Wednesday]

The Armenian Government claims to have shot down four Azerbaijani drones in the Kotayk and Gegharkunik provinces of Armenia, including close to the capital Yerevan.

The adversary's UAV in #Kotayk region (very close to capital #Yerevan) was downed by the Air Defense Forces of #Armenia. #StopAzerbaijaniAggression

The fourth UAV is neutralized as well. @NikolPashinyan

Hundreds of ethnic Azerbaijanis in Iran have held a protest in the city of Tabriz in support of the Azerbaijani army.

Protesters chanted ‘Karabakh is ours, will be ours’, ‘We are ready to die’, ‘Russians, the French, and Armenians are the enemies of Azerbaijan’ and other slogans.

The protest came after a joint statement from France, Russia, and the United States calling on Armenia and Azerbaijan to begin negotiations without preconditions.

They also highlighted the ‘inadmissibility’ of the involvement of fighters from ‘other regions’.

‘They reaffirmed their readiness to closely coordinate the actions of Russia and Turkey to stabilise the situation in order to return the settlement of the Nagorno-Karabakh conflict to a peaceful negotiation channel as soon as possible.’

The statement marks a significant change of tone for the Turkish side. President Recep Tayyip Erdogan stated earlier today in a speech to the Turkish Parliament that calls for a ceasefire between Azerbaijan and Armenia were unacceptable.

‘The ongoing calls by the co-chairs for a ceasefire are unacceptable. The solution to the problem will come after the withdrawal of the Armenian Armed Forces from the territory of Azerbaijan. Our brothers in Azerbaijan are forced to solve their problem themselves. We do not care about the calls of countries that ignore the fact of occupation’, he said.

A group of young Azerbaijanis who oppose the continuing violence have written a statement opposing the war.

‘It is long due that we, Azerbaijani and Armenian youth, take the resolution of this outdated conflict into our hands,’ the statement said.

‘It should no longer be the prerogative of the men in suits, whose aim is the accumulation of capital, both economic and political, and not the conflict’s resolution.’

‘We should shed away this ugly cloak of the nation-state, which belongs in the dustbin of history, and imagine and create new ways of common and peaceful coexistence.’

‘For this, it is very important to revive political, grassroots initiatives, comprised primarily of ordinary local citizens, that will re-establish peace talks and cooperation. We, leftist activists in Azerbaijan, by no means support any further mobilisation of the country’s youth into this meaningless war and see restoring dialogue as our primary goal.’

OC Media has republished the statement in full.

The Ministry of Defence has reported that Armenian forces have opened artillery fire on civilian objects in the city Horadiz. 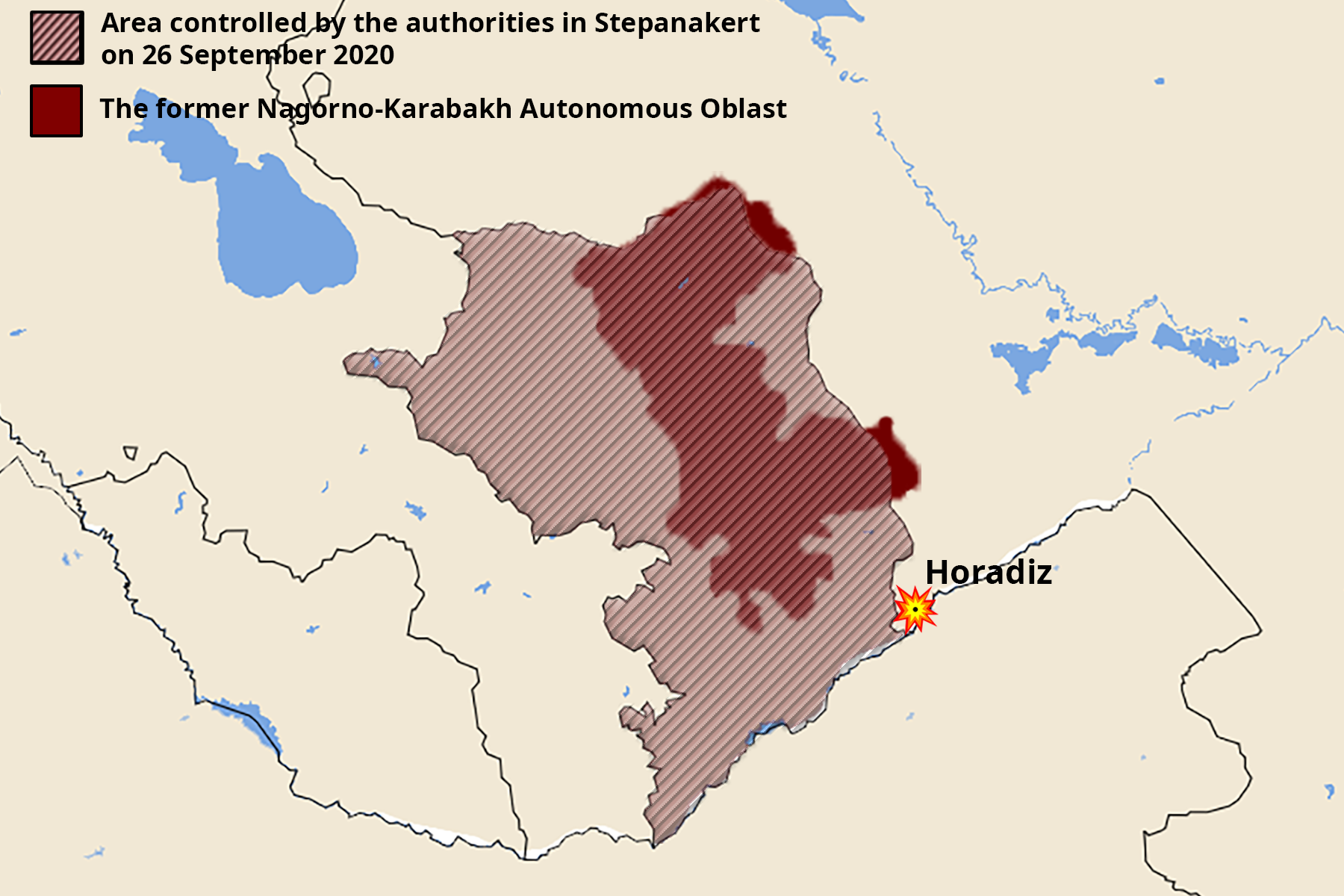 Shortly before, Azerbaijan’s Chief Prosecutor’s Office reported that the nearby village of Chojug Marjanli was under ‘intensive shelling’, and that ‘many’ houses had been damaged.

French President Emmanuel Macron has said that France has confirmed that Syrian fighters are joining the Nagorno-Karabakh ‘theatre of combat.

In an address given today, Emmanuel Macron said that he has received information that makes ‘certain’ that Syrian fighters are heading to join ‘the theatre of combat’ in Nagorno-Karabakh.

Azerbaijan’s Chief Prosecutor’s Office has reported that the total number of civilian deaths on the Azerbaijani side has reached 19, with 55 more injured.

Georgian civil society groups have announced a pro peace demonstration at the government office in Tbilisi on Friday at 18:00.

‘For several days now, we have been observing the commencement of the most intense armed confrontation between Azerbaijan and Armenia in Nagorno-Karabakh in recent years and the extreme escalation of the military situation in the conflict zone’, the organisers write.

‘Despite the critical statements of international organisations and other actors, the signs and readiness to transform military conflict into a political negotiation framework, unfortunately, is not visible so far.’

Earlier the same day, the groups published a ‘Peace manifesto’ calling on the Georgian government to remain neutral in the conflict and made a petition to collect signatures with the same request addressing the government.

Azerbaijan’s Foreign Ministry has released a statement accusing Armenia of ‘grossly violating international humanitarian law’ by organising visits by foreign journalists to the frontline and ‘endangering their lives’.

Two French Citizens, both journalists from Le Monde were injured during the shelling of Martuni (Khojavand)

The ministry said that Azerbaijan had refused to organise similar visits for journalists to the frontline for their own protection.

The Ministry also advised foreign journalists who want to visit the frontline and Nagorno-Karabakh to first apply for permission from the Azerbaijani government.

Turkish President Recep Tayyip Erdogan has said in a speech to the Turkish Parliament that calls for a ceasefire between Azerbaijan and Armenia are unacceptable.

The comments came after a co-statement by the presidents of the US, France, and Russia calling for immediate negotiations without preconditions.

‘The condition for long-term peace in the Caucasus is the liberation of every piece of the occupied lands of Azerbaijan. Turkey perceives Azerbaijan from the prism of the “one nation and two states” principle. We will continue to provide all possible support to our Azerbaijani brothers’, he said.

Erdogan also criticised the work of the Minsk Group of the OSCE.

‘The ongoing calls by the co-chairs for a ceasefire are unacceptable. The solution to the problem will come after the withdrawal of the Armenian Armed Forces from the territory of Azerbaijan. Our brothers in Azerbaijan are forced to solve their problem themselves. We do not care about the calls of countries that ignore the fact of occupation’, he said.

The Armenian Service of National Security has claimed to have arrested an unnamed former high-ranking military officer who they accuse of handing state secrets to Azerbaijan.

They said the man held several positions over a number of years and had access to information about military equipment, objects of high importance, personnel, and reserves.

The statement said he was recruited in Georgia by representatives of the Azerbaijani special services.

According to the statement, the man used his connections in the Armed Forces of Armenia and Nagorno-Karabakh, and periodically met with colleagues, then met in Georgia with representatives of the intelligence services of Azerbaijan.

The ministry said that some of the meetings took place on the territory of the Azerbaijani embassy. In addition to meetings, they stated that he contacted them by phone to transmit information.

A joint statement released by the presidents of France, Russia, and the United States condemns the escalation of violence in Nagorno-Karabakh. The statement also expresses condolences to the families of those who have died in the fighting.

Joint statement being prepared by Russia, the United States, and France

The Kremlin’s press service has reported that Russia, France, and the United States are working on a joint statement about the ongoing fighting in Nagorno-Karabakh.

According to the Armenian Unified Infocenter, two French Citizens, both journalists from Le Monde were injured during the shelling of Martuni (Khojavand).

Armenia’s Foreign Ministry announced earlier today that over 50 international new outlets and nearly 200 foreign journalists have received accreditation by the Ministry, most of whom are already in Armenia and Nagorno-Karabakh.

The Defence Ministry of Azerbaijan has accused Armenia of firing rockets from the ‘Gorus district’ of Armenia. An Azerbaijani name for the territory, the Gorus district refers to the territory surrounding and containing the city of Goris, in Armenia’s Syunik Province.

The city of Goris is the last major settlement on the southern highway connecting Armenia to Nagorno-Karabakh. It is located on the territory of the Republic of Armenia and is not in Nagorno-Karabakh. 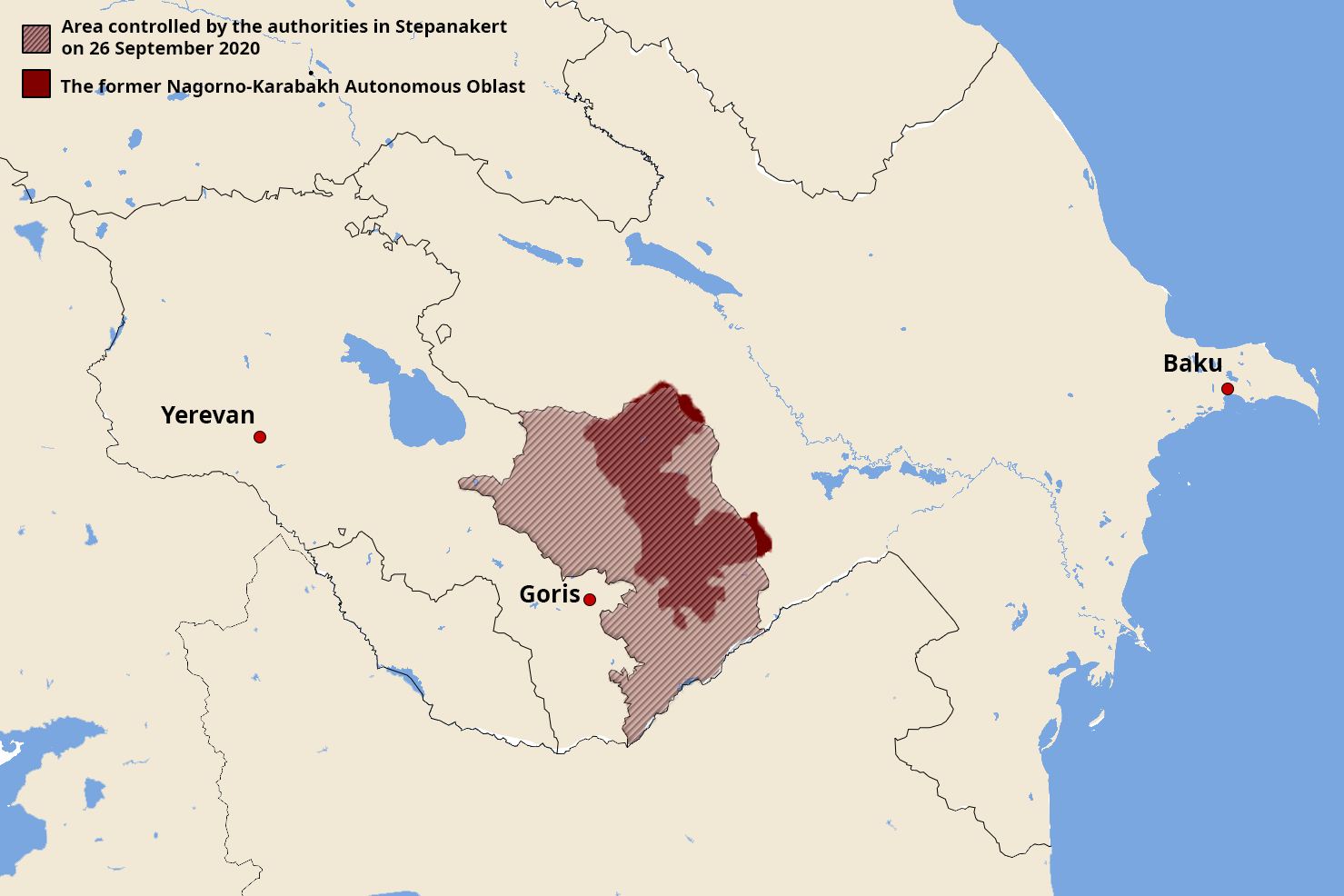 Azerbaijani Defence Ministry spokesperson Vagif Dargyakhly has denied that one of their helicopters was shot down and crashed in Iran, according to Russian state-run news agency Tass.

Seventeen Georgian civil society groups have published a ‘Peace Manifesto’ calling on the Georgian government to remain neutral in the conflict. They urged the government to make humanitarian and other efforts to help civilians in need.

They also urged the Armenian and Azerbaijani authorities to make efforts to stop the military confrontation and seek peace.

‘We, people living in the Caucasus region, have grave experience of brutal wars, conflicts and living in displacement… No nation or ethnic group in the region has attained victory and development as a result of war. Hence, we believe that only peace, and a policy of negotiations and cooperation, can bring stability and development to the region’, the Manifesto read.

Armenia’s defence ministry has claimed to have shot down an Azerbaijani helicopter which crashed in Iran. They said there was ‘no element of intent’.

Today in the SE of the #Artsakh-Azerbaijani conflict zone (Lele Tepe), units of the #DefenseArmy shot down an enemy combat helicopter that crashed in the terr. of #Iran. MoD of the #Artsakh announces that there is no element of intent. Ops take place close to Iran.

The Armenian Ministry of Defence has confirmed the deaths of 104 soldiers in the fighting so far. As of yet, Azerbaijan has not released figures on fatalities among military personnel.

Azerbaijan reports that 16 civilians have died in total. Fifty-five are injured. Earlier today, the Azerbaijani Ministry of Defence reported that Armenian forces were shelling the city of Tartar.