Heavy fighting between Armenian and Azerbaijani forces in Nagorno-Karabakh is continuing for the fourth day.

[The news as it happened: Sunday and Monday, and Tuesday]

Armenia has revoked the honorary doctorate granted to Mikhail Saakashvili by Yerevan State University. The doctorate was granted to the former Georgian president in 2009.

Saakashvili weighed in on the conflict on Monday, stating on Facebook that Nagorno-Karabakh was part of Azerbaijan’s sovereign territory.

‘My position is absolutely clear and it is based on the principle of state unity,’ he said, ‘and so Nagorno Karabakh is a part of the Republic of Azerbaijan’s sovereign territory and nothing can change this.’

What does the ECHR’s decision on Armenia vs Azerbaijan mean?

The European Court of Human rights has granted an interim measure in the case of Armenia v Azerbaijan, ordering both sides to respect the rights of civilians. But what does this decision actually mean, and what are the precedents?

Read more: What does the ECHR’s decision on Armenia vs Azerbaijan mean?

Azerbaijan’s Chief Prosecutor’s Office told Azerbaijani news agency Report that at around 16:00, an artillery shell which fell near a petrol station in Horadiz (Khoratunik), near Fuzuli (Varanda), killed 1 civilian and left three injured.

‘A brief engagement with outcomes decisive enough to allow climb-downs from the soaring rhetoric of Armenian and Azerbaijani leaders in recent days looks increasingly unlikely.’

‘A more protracted conflict raises the scope for ‘proxification’. This is significant since one of the distinguishing features of the Armenian-Azerbaijani rivalry to date has been the inability of the parties to make their claims resonate with, and truly become proxies for, great power agendas. That may now change, but with uncertain outcomes.’

Read more: Analysis | A dangerous turn in a 30-year conflict

The Azerbaijani Ambassador to Russia, Polad Bulbuloghlu, said in an interview with Russian independent media TV Rain that if Armenia recognises the independence of Nagorno-Karabakh, then it ‘will be the last bridge that they would burn’ and that the war would continue until ‘a victorious end’.

During their speech at a special meeting of the OSCE Permanent Council on September 29, the Permanent Mission of Azerbaijan to the OSCE stated that the Azerbaijani side ‘hopes that the OSCE Minsk Group will finally fully understand the seriousness of Azerbaijan's intentions and demand that Armenia withdraw from the occupied territories completely and unconditionally to ensure peace in the region’.

‘Until then, Azerbaijan will continue its legitimate military operations’.

‘The settlement of the conflict is possible only on the basis of full respect for the sovereignty and territorial integrity of the Republic of Azerbaijan within the norms and principles of international law and the internationally recognized borders reflected in the Helsinki Final Act’, the Mission stated.

During a news conference held in Riga, Latvia, France’s President Emmanuel Macron said that Turkey’s ‘warlike’ rhetoric was ‘inconsiderate and dangerous’ and that it was encouraging Azerbaijan to reconquer Nagorno-Karabakh. However, Macron also stated that he had no evidence of direct Turkish involvement.

Macron added that it’s too soon to speak of regional conflict. ‘I say to Armenia and the Armenians, France will play its role,’ he said.

Macron will be discussing the tensions with Russian President Vladimir Putin on Wednesday evening and US President Donald Trump on Thursday before reporting on the situation to the European Council.

Iranian State-run TV Iribnews reported that the allegations and videos widely spread on social media with trucks allegedly transferring arms from Russia through Iran to Armenia are groundless.

Iribnews stated that a correspondent in the field appearing in the video reportage ‘shows that what was referred online as carrying ammunition’ were just ‘a few shipments of trucks that the Armenian government has previously purchased from Russia’.

However, according to the report, to prevent any misunderstanding Iran stopped the shipments from leaving the country through the Nurduz-Agarak border.

‘The positions of the Islamic Republic regarding Azerbaijan have always been clear and transparent, and we have always recognized and respected the territorial integrity of this neighboring country, and we consider the end of the occupation to be a cause of stability in the region’, Vaezi reported as saying.

Earlier today, Azerbaijani MP Sabir Rustamkhanli during the Parliament’s session accused Iran of supporting ‘Christian Armenia’ and ‘bringing serious damage to Islamic world’. He also proposed to open an Azerbaijani Embassy in Israel, which Azerbaijani has not had yet.

According to Armenia’s Defense Ministry spokesperson Sushan Stepanyan, the city of Martakert has been shelled by Azerbaijani armed forces. As a result, three civilians were killed and several injured.

Armenia’s Representative to the ECHR responds to ruling

Yeghishe Kirakosyan, Armenia’s representative to the European Court of Human Rights (ECHR), has responded to the court’s decision to order interim measures to protect civilians.

Kirakosyan said the decision was a success for the Armenian side as it was made based on the request and on the evidence gathered by the Armenian government. He also pointed out that the court had not sent a request to the Azerbaijani government for additional evidence or clarification regarding the situation.

The ECHR passed the decision after a request by the Armenian Government. Their request asked the court to order Azerbaijan to:

In their ruling, the ECHR ordered both Armenia and Azerbaijan to ‘refrain from taking any measures, in particular military actions, which might entail breaches of the European Convention, specifically the rights of the civilian population, including putting their life and health at risk.’

The decision also states that the sides should immediately inform the Court about actions taken by them aimed at ‘complying with the rights of the civilian population.’

Kirakosyan told reporters that in the next several days, the Armenian side would provide additional evidence to the ECHR and present measures taken by the Armenian government per the above-mentioned request of the Court.

Last night, Jnews, a Georgian news site based in Samtskhe-Javakheti, reported that a group of ethnic Armenians in the village of Kartsakhi blocked the road near the border crossing with Turkey, preventing lorries from Turkey proceeding.

They argued that the route could be used to transport weapons to Azerbaijan.

The roughly 1,000 protesters were also demanding that the Ninotsminda-Bavra crossing point between Georgia and Armenia be fully opened so that humanitarian aid they had collected could be sent to Armenia.

The police cleared the road later that night. 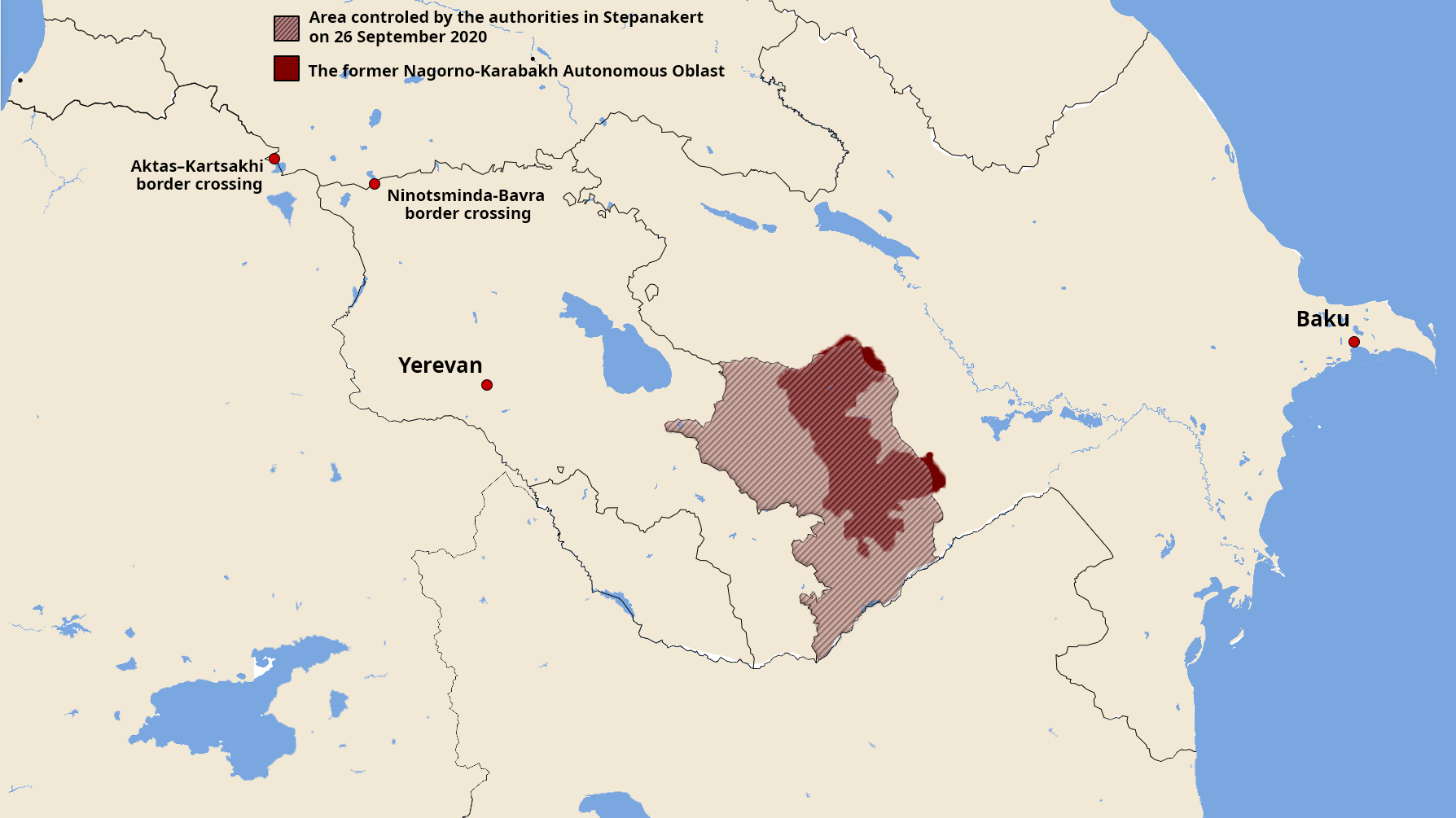 In an interview with Russian Interfax News Agency, Armenian Prime Minister Nikol Pashinyan said that Armenia does not currently consider it possible to hold a trilateral meeting with Russia and Azerbaijan on the resolution of Nagorno-Karabakh conflict.

‘During intense hostilities, it is not very appropriate to talk about an Armenia-Azerbaijan-Russia summit. An appropriate atmosphere and conditions are needed for negotiations’, he said.

He said that Armenia was always ready for peace negotiations, but ‘this does not mean that Armenia or Karabakh are ready to resolve the issue to the detriment of their national interests and security’.

Pashinyan also said that Armenia is also considering the possibility of recognizing the independence of Nagorno-Karabakh.

Pashinyan stated that Armenia does not intend to apply to the Collective Security Treaty Organization (CSTO) as of yet. At the same time, he said Armenia is ready to hold a meeting of Eurasian Economic Union (EAEU) intergovernmental council in Yerevan in early October.

Azerbaijan’s Ministry of Defense has claimed that Armenian Armed Forces have started shelling Goranboy, a city near the frontline on the territory of Azerbaijan.

In a meeting with Russian journalists this morning, Nikol Pashinyan said that Armenia is against the deployment of international peacekeepers to Nagorno-Karabakh. The Armenian Prime Minister stated that ‘Armenia can ensure its own security’.

Here’s the full text of the UN Security Council statement released by the Estonian Mission to the UN. Estonia is currently one of the 10 non-permanent members of the Security Council.

‘29 September 2020 Security Council members expressed concern over reports of large scale military actions along the Line of Contact in the Nagorno-Karabakh conflict zone.’

‘They strongly condemn the use of force and regret the loss of life and the toll on the civilian population. Security Council members voiced support for the call by the Secretary General on the sides to immediately stop fighting, de-escalate tensions and return to meaningful negotiations without delay.’

‘Security Council members expressed their full support for the central role of the OSCE Minsk Group Co-Chairs and urge the sides to work closely with them for an urgent resumption of dialogue without preconditions.’

Armenian Prime Minister Nikol Pashinyan has said that at the moment there is ‘no need’ to make use of the 102nd Russian Army base in Armenia. However, if ‘necessary’ its ‘potential’ will be used, he added.

In a statement released today, Human Rights Watch called on all sides to ‘at all times distinguish between combatants and civilians under international humanitarian law’.

‘All sides should respect the absolute ban against targeting civilians or carrying out attacks that indiscriminately harm civilians’, the statement reads.