Azerbaijan: Number of injured up to 32 in Ganja

Azerbaijan: Number of injured up to 32 in Ganja

Fighting between Armenian and Azerbaijani forces in Nagorno-Karabakh is continuing for the eighth day.

[The news as it happened: Sunday and Monday, Tuesday, Wednesday, Thursday, Friday, and Saturday]

Assistant to the President of Azerbaijan Hikmat Hajiyev has reported that two 300 km medium-range missiles hit Khizi and the Absheron District. 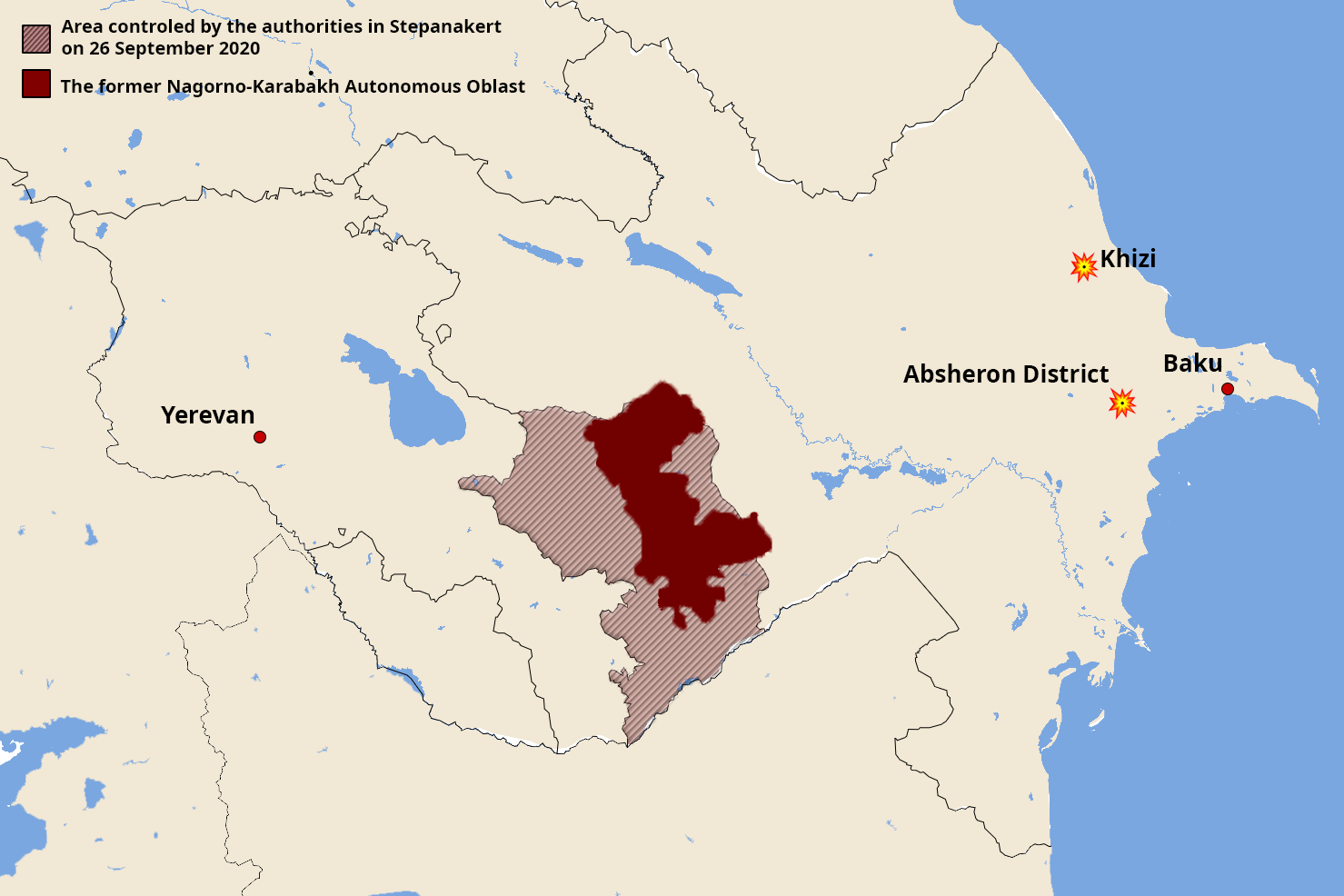 Armenian Defence Ministry spokesperson Shushan Stepanyan has stated that Armenian forces did not fire ‘in the direction of Mingachevir’ and has called statements about this from Azerbaijani officials ‘fake’.

Azerbaijani presidential aide Hikmet Hajiev has said that Armenia launched a missile attack on Azerbaijan’s fourth-largest city, Mingachevir. Mingachevir hosts the Mingachevir dam and hydroelectric power plant, the largest in the South Caucasus, both of which were targetted, according to Hajiyev.

Shortly after that Azerbaijan’s Ministry of Defence stated that the city of Tartar was hit by artillery fire. They report that civilians have been wounded.

Arshavir Gharamyan, a former secretary of the Nagorno-Karabakh Security Council, wrote on Facebook that the target of the attack was a thermal power plant in the city. 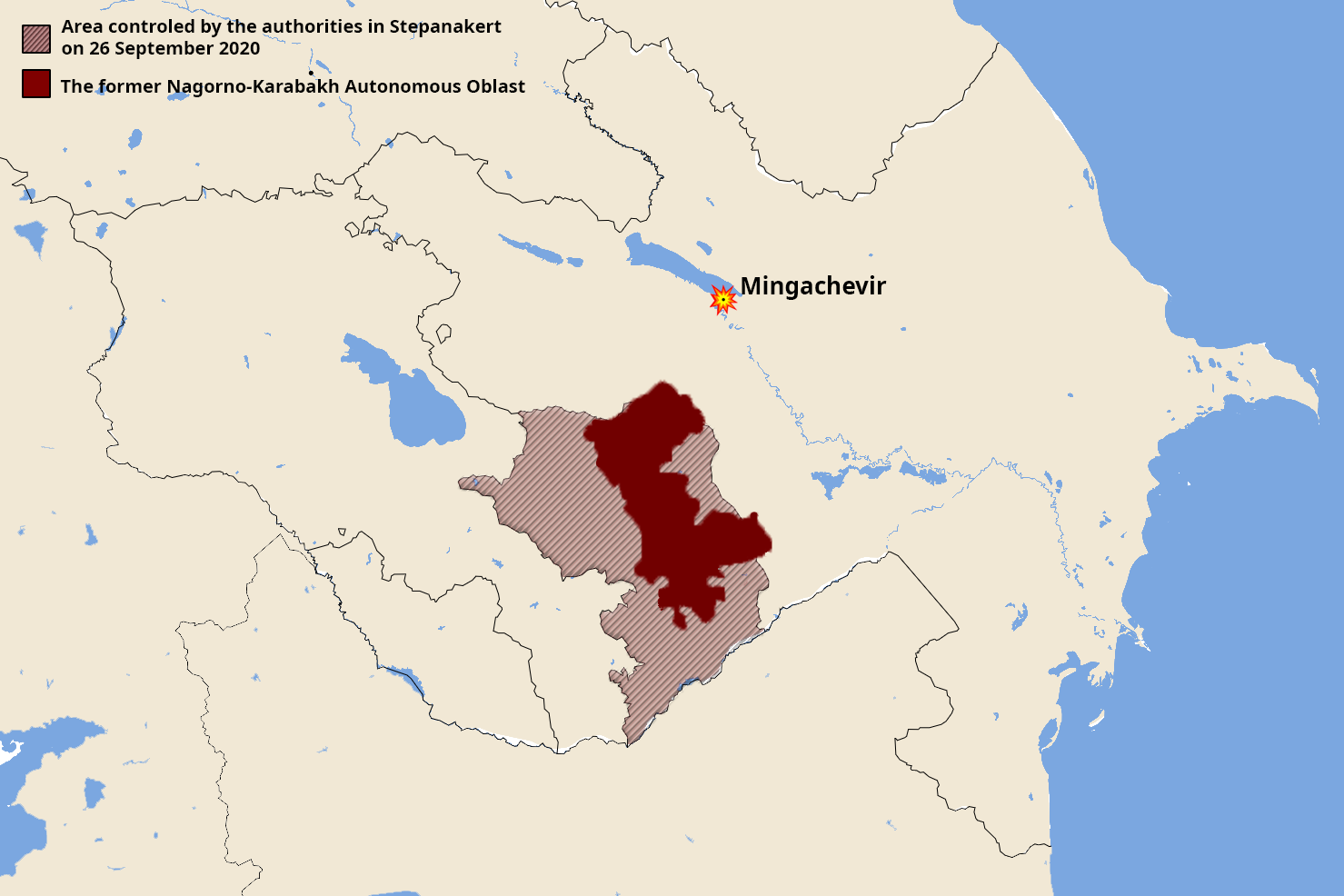 In a press briefing, Armenian Ministry of Defence spokesperson Artsrun Hovhannisyan denied recent claims by Azerbaijani President Ilham Aliyev that Azerbaijan had taken the village of Madagiz (Madaghis) and the city of Jabrayil (Jrakan).

Azerbaijan’s President Ilham Aliyev has stated that the Azerbaijani army has taken control of the city of Jabrayil (Jrakan) and nine nearby villages.

Russia can only station peacekeepers in Nagorno-Karabakh with the consent of both Armenia and Azerbaijan, Russian Presidential Press Secretary Dmitry Peskov told Russian news outlet RBC.

In an interview with Al Arabiya Azerbaijani President Ilham Aliyev said that the conflict with Armenia ‘must be resolved through dialogue, but there must a basis for this dialogue’.

Aremenian Ministry of Defence Spokesperson, Artsrun Hovhannisyan, has reported that the city of Shusha (Shushi) has come under fire from the Azerbaijani military.

Civilians are reported to have been injured and killed.

A video published earlier today appears to show cluster munitions being used by Azerbaijani Armed Forces in the ongoing bombardment of the capital of Nagorno-Karabakh.

In a press conference earlier today, Azerbaijani presidential spokesperson Hikmet Hajiyev also accused Armenian forces of using cluster munitions during today’s strike on the city of Ganja. Neither Armenia nor Azerbaijan have signed or ratified the International Convention on Cluster Munitions.

Azerbaijan’s President Ilham Aliyev published a tweet in which he stated that the Azerbaijani military has ‘liberated’ the city of Jabrayil (Jrakan) and several villages near it.

Armenia's Ministry of Defence has denied the claim.

Armenia has submitted a request to the European Court of Human Rights for interim measures against Turkey, for allegedly assisting Azerbaijan in attacking civilians in Armenia and Nagorno-Karabakh, reports Armenian MP Gayane Abrahamyan.

🔴 #URGENT #Armenia submitted a request with the European Court of Human Rights on applying interim measures against #Turkey, in regard to the assistance to the #Azerbaijani attacks against the civilian population and objects of the Republic of Arstakh and Armenia
..@YeghisheK

Azerbaijan: Number of injured up to 32 in Ganja, one dead.

Azerbaijan’s Chief Prosecutor Kamran Aliyev has stated that the number of injured after the missile strike on Ganja has risen to 32. One civilian was killed. He also said that the city infrastructure and houses were severely damaged.

Armenian authorities in Nagorno-Karabakh have denied claims that Azerbaijani armed forces have taken control over the village of Madagiz (Madaghis).

The General Prosecutor’s Office of Azerbaijan has reported that the civilian death toll is up to a total of 24, with 111 injured.

The Turkish Ministry of Foreign Affairs released a statement condemning the rocket fire on the city of Ganja.

‘The current attacks of Armenia targeting the civilian population in Ganja, the second largest city of Azerbaijan, are a new manifestation of Armenia's unlawful attitude’, the statement reads. ‘These attacks are an indication of the desperation that Armenia has fallen into and that it will not fail to commit crimes against humanity in order to continue its illegal occupation.’

Azerbaijan’s Assistant to the President Hikmat Hajiyev said during a briefing earlier today that Arayik Harutyunyan, the president of Nagorno Karabakh was ‘severely wounded’.

‘Arayik Harutyunyan was not on the front line, he was hiding in a bunker. The Azerbaijani armed forces also found him in the bunker, and as a result of a precise shot Arayik Harutyunyan has been seriously wounded’, he said.

Many online have disputed the claim, as Haratutyan appeared to be broadcasting live at the time of Hajiyev’s briefing.

Azerbaijan’s Ministry of Foreign Affairs has stated that 1 civilian was killed and 4 injured in ‘dense residential areas of Ganja’ as the result of rockets hitting the city.

Azerbaijan’s Ministry of Emergency Situations has stated that according to preliminary information two people have been injured in the rocket strike on Ganja.

According to the statement, ‘the relevant forces of the Ministry of Emergency Situations involved in the area prevented a fire at one address’ and are ‘taking  appropriate measures’ to limit the damage at three other locations.

Azerbaijan’s Ministry of Defence has stated that the information about Armenia striking military facilities in Ganja is ‘provocative and false’ and that only ‘civilians, civilian infrastructure, and historical buildings’ were hit.

Earlier today, Arayik Harutyunyan, the head of Nagorno-Karabakh, said that ‘military objects permanently located in the large cities of Azerbaijan have become targets’.

On Saturday evening, Azerbaijan’s President Ilham Aliyev posted a tweet in which he wrote that the Azerbaijani military ‘liberated’ seven villages.

Following the statement, numerous videos appeared on social networks showing how Azerbaijanis walked out to the streets en masse and held celebrations in spite of a curfew and martial law.

The Armenian Defence Ministry reports that there has been a renewed bombardment of the capital of Nagorno-Karabakh and that civilians have been injured.

The enemy continues targeting civilian settlements, including the capital city of #Stepanakert with banned weapons. pic.twitter.com/kV6MrYDAyp

Azerbaijan: ‘Firing from the territory of Armenia into Azerbaijan expands the combat zone’

The statement came shortly after Azerbaijan's Ministry of Defence reported that Ganja was being hit by artillery fire from the territory of Armenia.

Armenia's Defence Ministry denied that any fire towards Azerbaijan had come from the territory of the Republic of Armenia.

Azerbaijan’s Defence Ministry reports that Azerbaijan’s second-largest city, Ganja, has come under artillery fire ‘from the territory of Armenia’. There is no news yet of any injuries or fatalities among the civilian population of the city.

Earlier,  the spokesperson of the government of Nagorno Karabakh Vahram Poghosyan said that ‘the Gyanja airport [was] blown up’. Arayik Harutyunyan, the head of Nagorno-Karabakh, also said that ‘military objects permanently located in the large cities of Azerbaijan have become targets’.

Armenia’s Defence Ministry has denied firing weaponry at Azerbaijan from the territory of the Republic of Armenia.