Fighting between Armenian and Azerbaijani forces in Nagorno-Karabakh is continuing for the sixth day.

[The news as it happened: Sunday and Monday, Tuesday, Wednesday, and Thursday]

Journalist Igor Zhdanov, from Russia-owned news channel RT, currently in the capital of Nagorno-Karabakh, has said that during the bombardment of the city a military hospital and two residential buildings were hit.

‘All patients are transferred from there to another hospital. We also got into two residential buildings - long four-story buildings. All the people from there now need to look for a new home’, he said.

The capital of Nagorno-Karabakh is under heavy shelling. Armenian authorities have reported that residential buildings have been hit and that ‘many have been injured’, there is no information yet about civilian deaths.

An anti-war rally in Tbilisi

Several dozen people have gathered outside the Georgian Government Chancellery calling for an end to the war in Nagorno-Karabakh.

The demonstration was organised by several civil society groups who called for ‘rejecting the prevailing ideas of ethnonationalism, chauvinism and militarism that have governed the countries of our region since independence.’

‘Recognition of Peace means a renunciation of the logic and politics of violence, subjugation, oppression’

A bus with Armenian and Russian journalists came under artillery fire, according to Artsrun Hovhannisyan, a spokesperson for Armenian Defense Ministry. A humanitarian volunteer from the United States was also present, according to local Armenian media.

Reportedly, there were no casualties.

OC Media contributor Bahruz Samadov has written an opinion piece outlining his thoughts on war, trauma, and the struggle for peace.

‘All of us are members of traumatised communities — and now we have been wounded again, our old traumas have been exposed and new traumas made daily. It is a vicious cycle — the pain of the past fueling the pain of the present and the future.’

‘This trauma cannot be avoided. It is real and we must learn to live with it.’

‘But despite its concrete reality, we must also realise that our current methods of coping with it do not work. Violence will only feed more violence. And a ‘dialogue’ that is moulded by the dominant narrative and monopolised by the state will not bring peace between our nations, at least, not in the near future.’

‘We must demand another way. No matter how hard that is.’

‘But also, we who stand against the war should be ready for compassion. The suffering of both nations will last a long time. And we must understand the suffering of our communities and stand by them, working tirelessly for peace — even if they reject us.’

‘We must demonstrate compassion and patience, and remember: the trauma stays with us.’

Read the full article: Opinion | To stand for peace, in spite of everything

Turkish President Recep Tayyip Erdogan said today that Turkey will stand by  Azerbaijan until Nagorno-Karabakh is ‘completely liberated from occupation’.

‘The Azerbaijani Army, which has been successfully advancing on the frontline so far, has liberated many territories from occupation [...]As Turkey, we are and will be with friendly and brotherly Azerbaijan with all our hearts. God willing, this struggle will continue until Karabakh is completely liberated from occupation’, he said.

‘The calls for a ceasefire, voiced by countries that for years have not been able to find a fair solution to the conflict in Nagorno-Karabakh, are not sincere and far from credible’, he said.

‘There will be a proportionate response’, to the ongoing strikes against Stepanakert (Khankandi) Nagorno-Karabakh President Arayik Harutyunyan is reported as saying. He also stated that ‘the family of the President of Azerbaijan will bear full responsibility’.

Artsrun Hovhannisyan, a spokesperson for the Defense Ministry of Armenia has stated that the capital of Nagorno-Karabakh has been shelled by Azerbaijani forces. The State Service of Emergency Situations and civilian infrastructure have reportedly been damaged and several injuries have been reported.

According to the Human Rights Defender of Nagorno-Karabakh, Artak Beglaryan, this is the heaviest strike on Stepanakert so far.

The latest attempt took place on the night of 29 September in the village of Orozmani, Dmanisi.

‘An unknown person/people came, dug the soil, and cut off fiber optic cables of international importance which comes in from the Black Sea connecting Europe and Asia with Poti-Tbilisi-Bolnisi-Dmanisi-Armenia."

The first case took place in the village of Sadakhlo, in Marneuli Municipality. 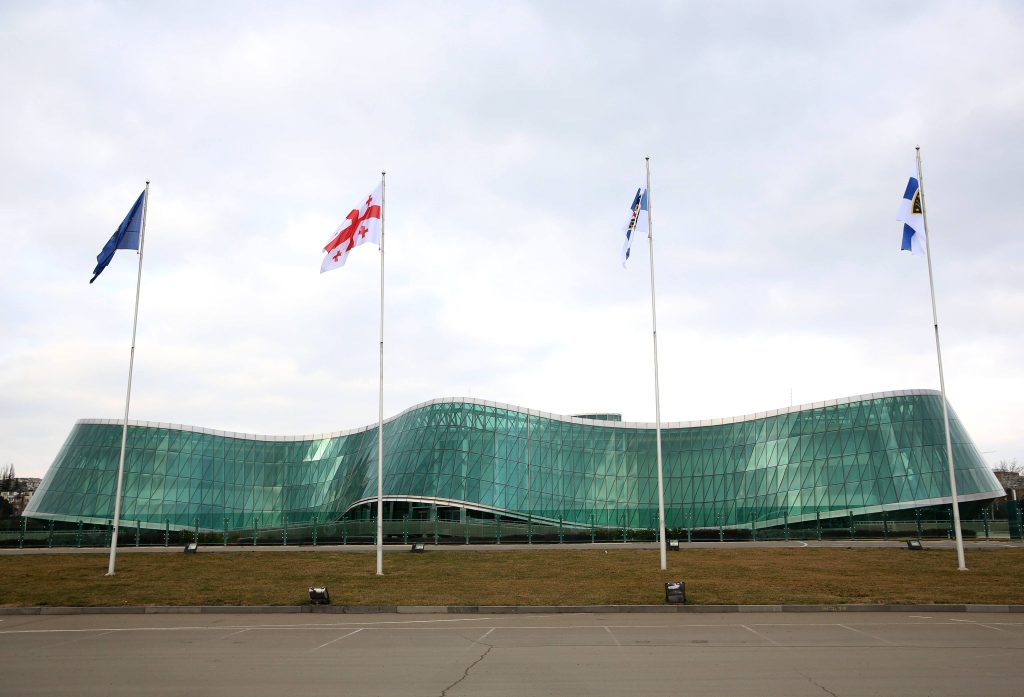 According to the ministry, Georgian telecoms operator Silknet discovered the damaged cable on the night of 28 September after a call from a resident of the village of Sadakhlo, which borders Armenia, about a lack of internet.

‘Company representatives went to the location and discovered that the cable, which goes over an irrigation channel, was cut. This cable provides the local population with internet and it also connects to the Republic of Armenia’, the statement reads.

According to the ministry the cables have been fixed.

The ministry is investigating both cases.

On 28 March 2011, Armenia lost all access to the internet for around five hours after a 75-year-old woman damaged a cable while digging soil looking for copper.

Artsrun Hovhanissyan, a spokesperson for Armenia’s Ministry of Defence reports that the city of Hadrut has again come under fire from Smerch rockets for the second time today.

Five civilians are reported to be injured.

Azerbaijan’s Ministry of Defence has reported that four villages have come under artillery fire, including with rockets.

These included the villages of Aghdam and Sabirkand in the north-west of the country and Amirli and Guzanli closer to the frontline. 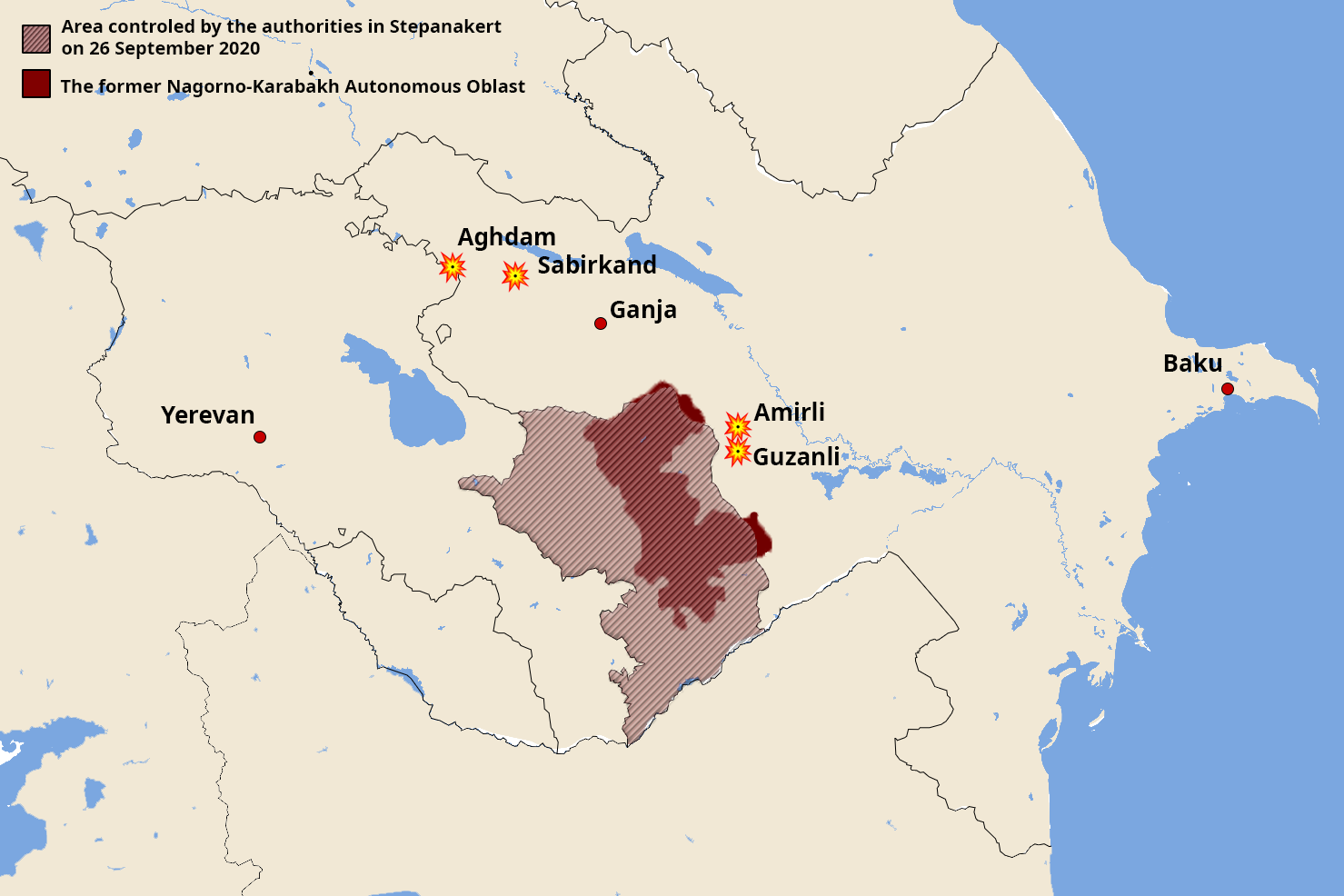 The town of Hadrut in southern Nagorno-Karabakh has come under fire. 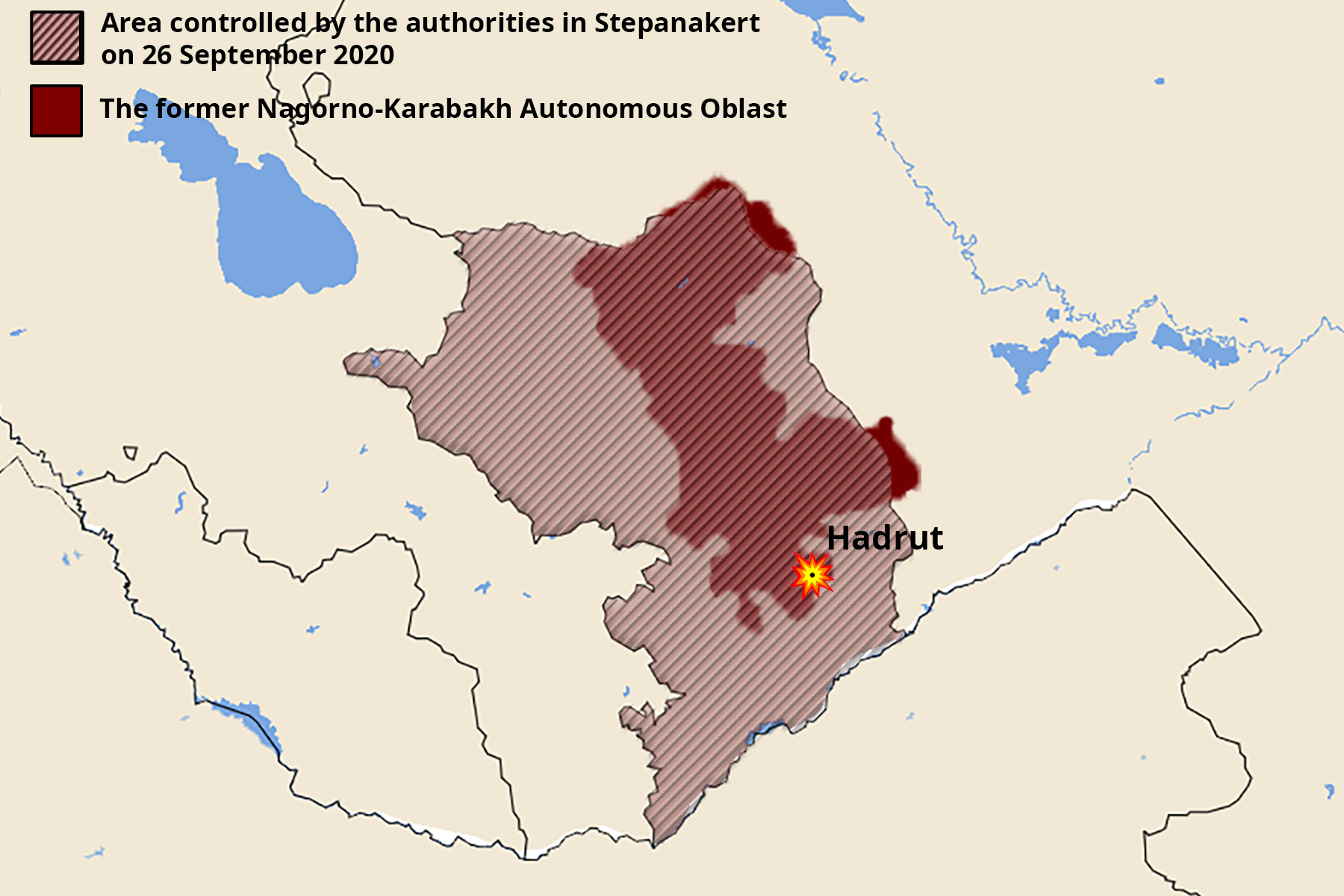 Artsrun Hovhannisyan from the Armenian Defence Ministry announced that the city was hit by an Azerbaijani Smerch weapon — a multiple rocket launcher. Several civilians have reportedly been injured.

Last night, Armenia recalled its ambassador to Israel over their supply of weapons to Azerbaijan.

Israeli journalists have reported that a number of flights operated by the Azerbaijani Defence Ministry and Silk Way Airlines, an Azerbaijani private cargo airline, have landed in the Ovda Airbase in southern Israel before returning to Azerbaijan.

‘Israel and Azerbaijan, we also have extensive trade relations, there are a lot of cargos back and forth, and we also bring fruits, some other vegetables from Israel,’ Hajiyev said.

6 \ During our interview today another Ilyushin 76 cargo plane owned by the Azeri Silk way airlines landed in Ovda base. Israeli analysts believe those plane carry weapons from Israel to Azerbaijan. Israeli officials refuse to confirm this. This is what @HikmetHajiyev told me: pic.twitter.com/LixsSU3PCj

‘We will continue to resolutely counter the aggression against Artsakh (Nagorno-Karabakh), while at the same time being ready to work with the OSCE Minsk Group co-chairing countries to restore the ceasefire based on the agreements in 1994-1995’, a statement just released by Armenia’s Foreign Ministry reads.

Borjomi water to be ‘partially nationalised’