Fighting between Armenian and Azerbaijani forces in Nagorno-Karabakh is continuing for the seventh day.

[The news as it happened: Sunday and Monday, Tuesday, Wednesday, Thursday, Friday]

Stepanakert has come under rocket attack, the local authorities have reported.

Several reporters on the ground said the shelling was followed by air raid alarms and a major blackout throughout the city.

Azerbaijani President Ilham Aliyev has claimed that Azerbaijani forces have captured the town of Madagiz (Madaghis) in the north-east of Nagorno-Karabakh. 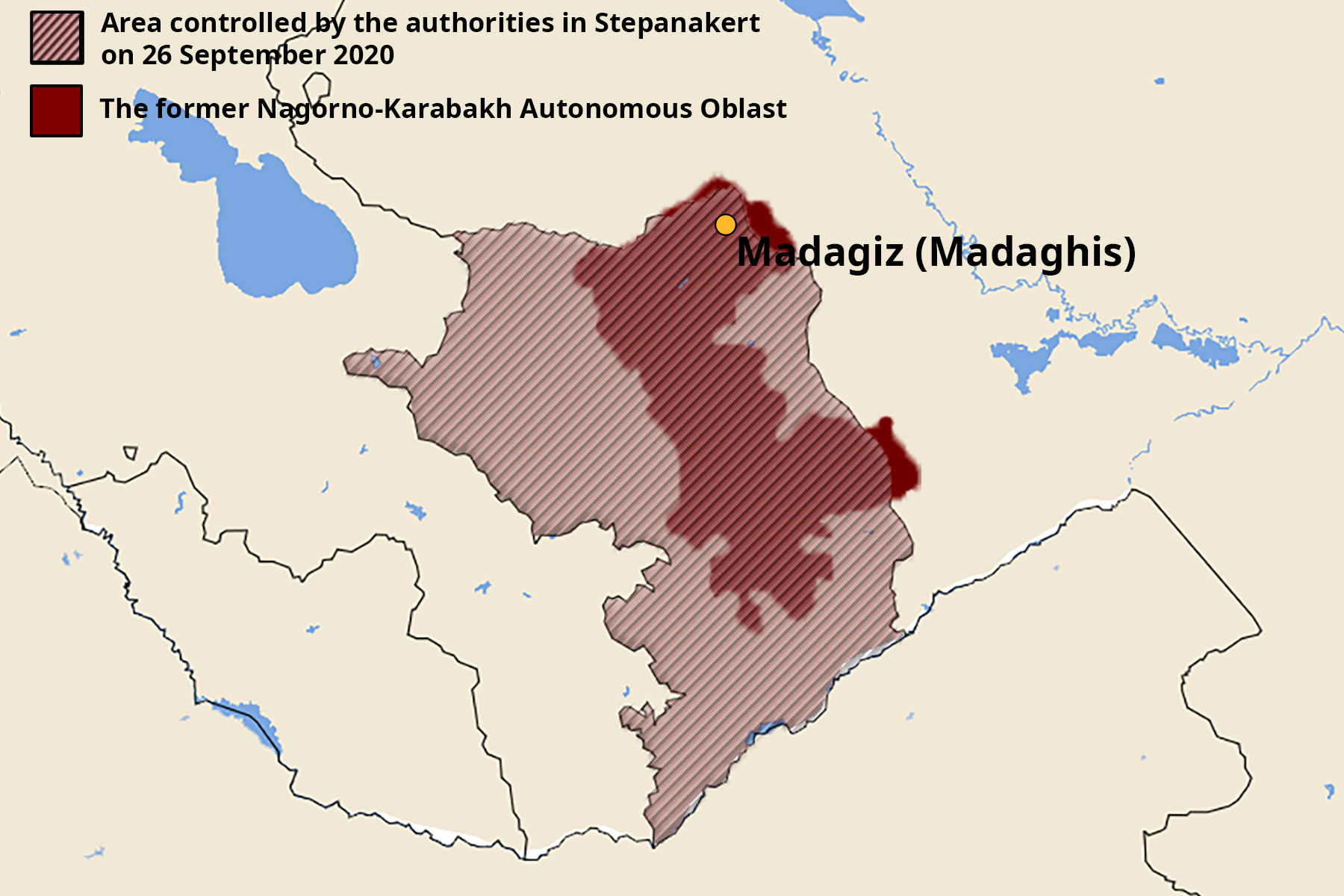 Iran ‘seriously warns’ against breach of their territory

He said they were ‘monitoring movement’ along their northern border ‘with great sensitivity’ and that any violation would be ‘intolerable’.

He said they had ‘seriously warned all sides to take the necessary precautions in this regard’.

The Foreign Ministry of Azerbaijan has accused the Armenian government and Armenian diaspora groups of ‘organising’ ethnic Armenians in third countries — including Syria, Lebanon, Russia, Georgia, Greece, United Arab Emirates and others — to travel to Nagorno-Karabakh to fight.

The ministry also ‘strongly urged’ that ‘origin or transit’ countries prevent such movements.

The statement comes amidst growing reports from international media outlets that Turkish-backed fighters are involved in the conflict on the Azerbaijani side.

The Guardian reported yesterday that they had spoken to a Syrian fighter who was currently fighting in Nagorno-Karabakh on the Azerbaijani side.

‘The 23-year-old from Idlib city said he travelled as part of a contingent of 1,000 Syrian men from the Turkish-backed Sultan Murad, Suleiman Shah and Al Hamza divisions which left the Hawar Kilis border crossing with Turkey for a military base in Gaziantep on 23 September’, they reported.

In an interview with Al Jazeera, Armenian PM Nikol Pashinyan did not rule out Armenia recognising Nagorno-Karabakh’s independence.

‘This situation has created a new military-political reality in our region… That is an item on the agenda, and a decision will be taken, or not taken, depending on a variety of factors’, he said.

The Armenian PM argued that upon coming to power, he offered to involve Nagorno-Karabakh representatives in the negotiation process, which he described as a ‘formula’ to settle the conflict.

He said that in return, the President of Azerbaijan insisted on the principle of territorial integrity which according to Pashinyan, meant returning to the status quo of 1988, something he described as ‘impossible’.

Pashinyan described Aliyev’s leadership as ‘dictatorial’ and accused him of using the issue of Nagorno-Karabakh to ‘justify his dictatorial rule’.

‘Only democratically elected governments are capable of engaging in or proposing mutual concessions’, he said, noting later in the interview that ‘It would be good if Azerbaijan had protests… as Armenia’.

Pashinyan called ‘groundless’ claims by the Azerbaijani government that Armenia was ‘resettling people from diaspora in Artsakh [Nagorno-Karabakh]’ and that such accusations were a ‘provocation’ that contributed to the escalation of the conflict.

The Azerbaijani Prosecutor General has announced that 19 Azerbaijani civilians have died so far with 61 wounded. Of these, eight were in Tartar, five in Goranboy, four in Aghdam, and two in Fuzuli district.

Georgia's State Security Service (SSG) has denied what it called ‘false information disseminated through social media’ that fighters from Syria were transported from Turkey to Azerbaijan through Georgia.

‘This is a lie which aims at escalating the situation in Georgia and the wider region’, Grigol Liluashvili, the head of the SSG stated today.

The SSG also confirmed earlier reports of calls for those living in Georgia’s Samtskhe-Javakheti region to block the Turkish-Georgian route.

On 30 September, a group of local residents briefly stopped Turkish lorries near the border crossing with Turkey in the village of Kartsakhi from entering Georgia, alleging they could have been used for that purpose.

Talking with Al Jazeera today, Azerbaijani President Ilham Aliyev said that diplomacy could work if Armenia complied with international law and started the immediate withdrawal from ‘a part of the territories on a timetable’.

He claimed that Armenia’s actions over recent years, especially those of current Prime Minister Nikol Pashinyan, had provoked the current hostilities.

He said that it was ‘absolutely clear’ that Armenia was provoking Azerbaijan over the last two years and that they 'wanted to destroy completely negotiation process’ and start a new war because they ‘suffered a very serious political crisis’.

Aliyev said they had ‘made some progress’ with the previous two Armenian leaders, ‘we were making step by step progress’, but that Pashinyan had ‘destroyed everything before him’.

He said that Pashinyan’s earlier statement that Nagorno-Karabakh was Armenia made negotiations ‘absolutely senseless’ because, he said, this meant that Armenia had no intention of return even the Azerbaijani regions outside of the former Nagorno-Karabakh Autonomous Oblast that they currently control.

‘If Armenia demonstrated goodwill and acted in compliance with the resolutions of main international organisations, the conflict would have been resolved many years ago’, he added.

Aliyev was also critical of the Minsk Group: ‘some countries should not have a place in this group because of their biased behaviour’.

‘ “We will negotiate, we will help” — We heard it many times, we don’t have time to wait another 30 years. The conflict must be resolved now’, he said.

Georgia’s State Security Council, which held the first meeting since the outbreak of the war in Nagorno-Karabakh on Saturday, said that Georgia had temporarily revoked permission for transiting any military goods in the direction of Armenia and Azerbaijan.

This included by air and overland.

‘Since the escalation of the conflict, Georgia has not and will not impose any restrictions on civil air freight’, the statement published on Saturday added.

The council once again called on the OSCE Minsk Group Co-Chairs and international actors to take all measures to end the violence and resume dialogue.

‘The Georgian side reaffirms its readiness to facilitate the resolution of the situation in any way possible, including, if necessary, to host a meeting of representatives of the parties to the conflict in Tbilisi.’

According to Le Figaro the French president ‘reiterated the calls for a ceasefire and proposed to initiate a process and a methodology allowing for a resumption of negotiations within the framework of the Minsk Group.’

France along with the United States, and Russia, co-chair the OSCE Minsk group and are charged with the mediating this conflict.

International journalists in the capital of Nagorno-Karabakh have reported continued shelling of Stepanakert this morning.

More shelling in Stepanakert this morning. We were watching the elderly and families being loaded onto buses to leave when there was an explosion nearby. People are now trying to stay behind thick walls.

The President of Nagorno-Karabakh, Arayik Harutyunyan, has said he is going to the frontline with the special forces. He said he would be ‘more valuable on the front than on the sidelines’.

The #Armenia'n nation & Homeland are under threat. W/Special Forces I left for the frontline, & call upon the Armenians all over world to unite & defend our inalienable right to live in our own land- #Artsakh #Karabakh - w/o existential threat posed by #Azerbaijan. We will win!

The Armenian and Azerbaijani defence ministries reported fierce fighting overnight along the entire length of the line of contact.

In a statement on recent telephone conversation between Ilham Aliyev and Emanuel Macron, the office of Azerbaijan's President claimed that that as a result of 'successful counter-offensive', the Azerbaijan army had 'liberated part of occupied territories'.

Earlier, the Press Secretary of Armenian Defence Ministry Shushan Stepanyan reported about the 'tough and fierce fights in the northern and southern directions' of Nagorno-Karabakh where they said Azerbaijan had concentrated and 'launched their advance'.