Georgians feel as alienated from those living in Abkhazia and South Ossetia as they do with ethnic minorities living in Georgia.

While the pandemic made ‘social distance’ about physically staying apart from one another, long before that, social distance in the social sciences measured inter-group acceptance, tolerance, and/or prejudice. The same approach is used in post-conflict settings to measure the extent of alienation between conflict divided societies, with studies suggesting that social boundaries grow between people across conflict lines when there is a lack of interaction.

Data from the Caucasus Barometer survey has regularly shown that Georgians are more accepting of doing business with other ethnicities, rather than of marrying them. The data from 2019 suggests a similar trend.

The data also indicates that Georgians feel similarly distant to those living on the other side of the conflict line (i.e. to Abkhazians and Ossetians) as to ethnic minorities living in Georgia (Armenians and Azerbaijanis). 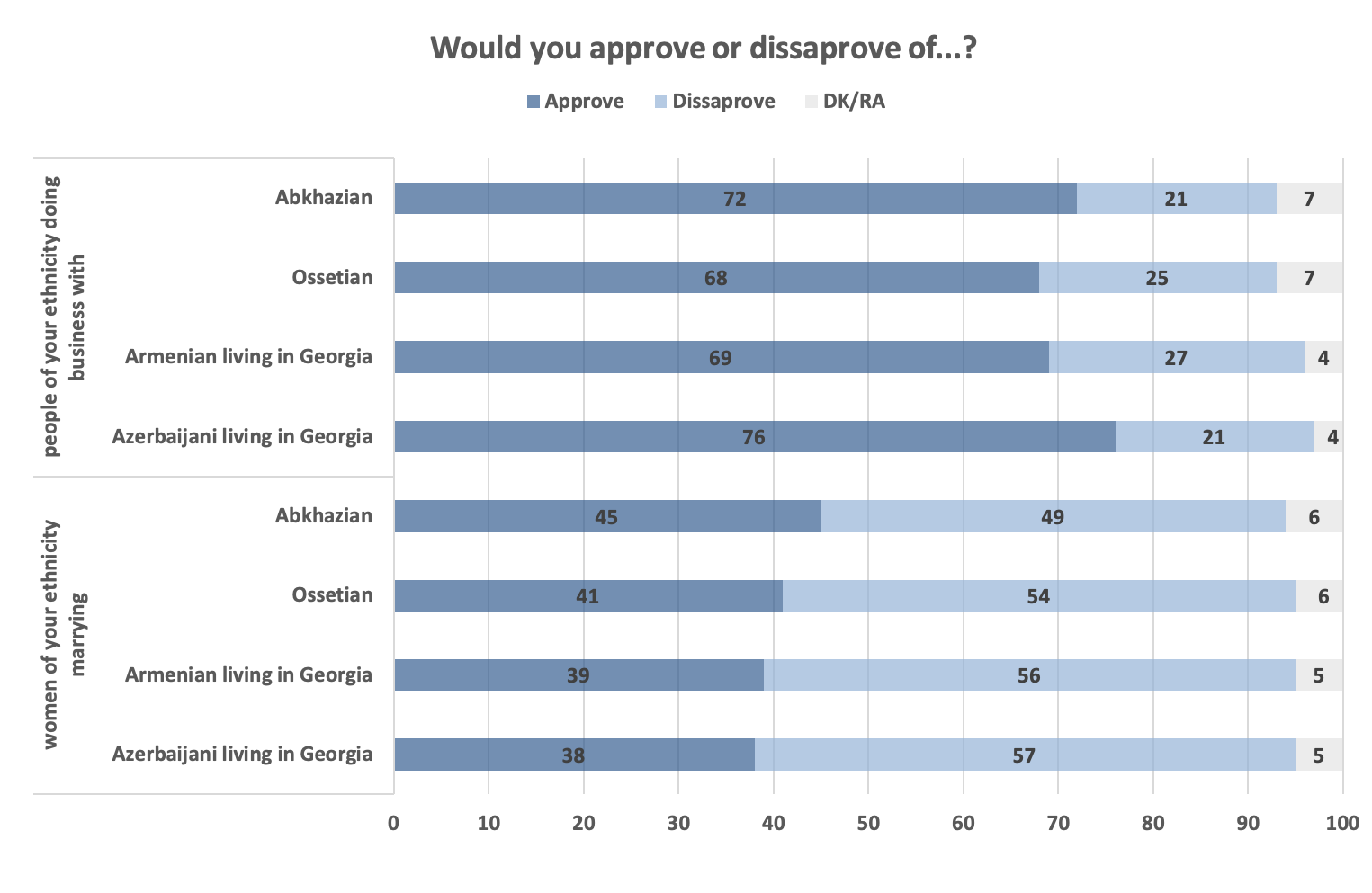 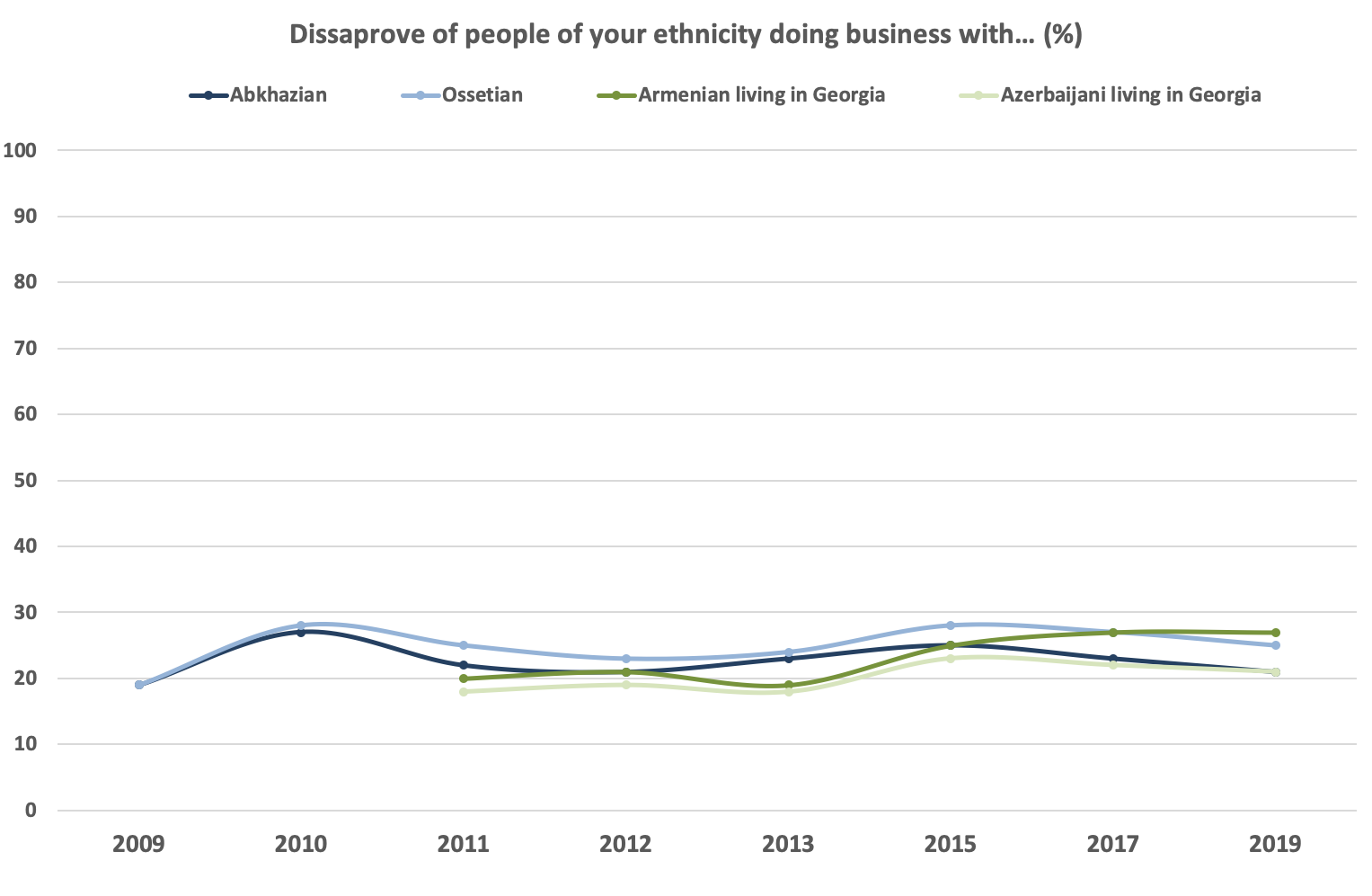 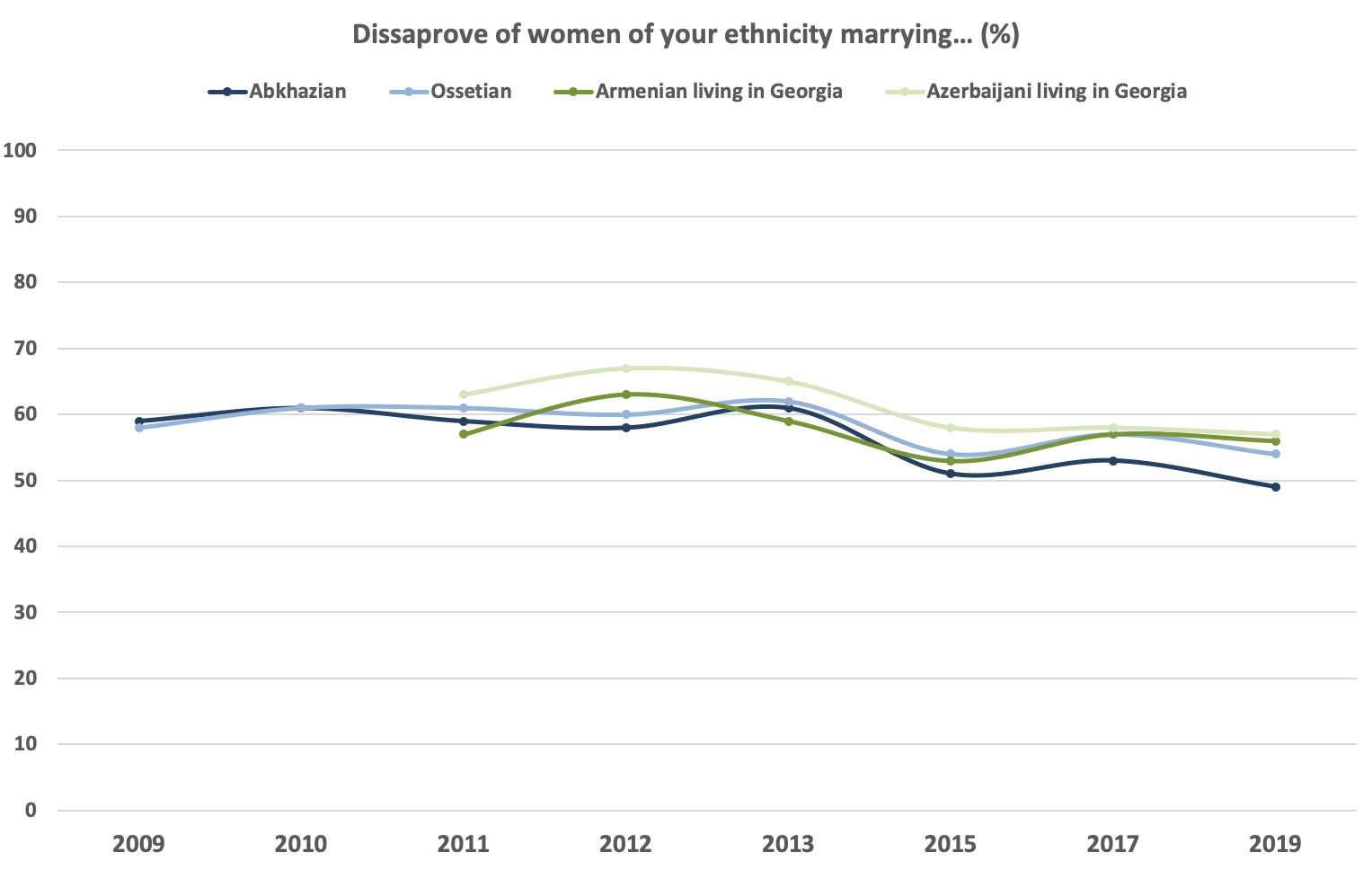 Further analysis suggests that different factors are associated with the acceptance of business and familial relations with different ethnicities.

Trust in others is associated with the acceptance of inter-ethnic business relations. People who are generally trusting are more likely to be accepting of business relations with all groups noted here compared to those who believe that one cannot be too careful in dealing with people.

Age is associated with acceptance of business relations with some ethnicities, with younger age groups being slightly more accepting compared to older age groups.

Gender and ethnicity are associated with acceptance of business relations with some ethnicities. Women and ethnic Georgians appear to be less accepting in this regard.

Religious affiliation, household income, and employment situation are associated only with acceptance of doing business with Azerbaijanis (not presented on the chart below).

Other demographic variables, such as settlement type, educational attainment, several economic well-being measures, the importance of religion in daily life, and interest in permanent emigration did not show any association with approval of doing business with any of the ethnicities noted here. 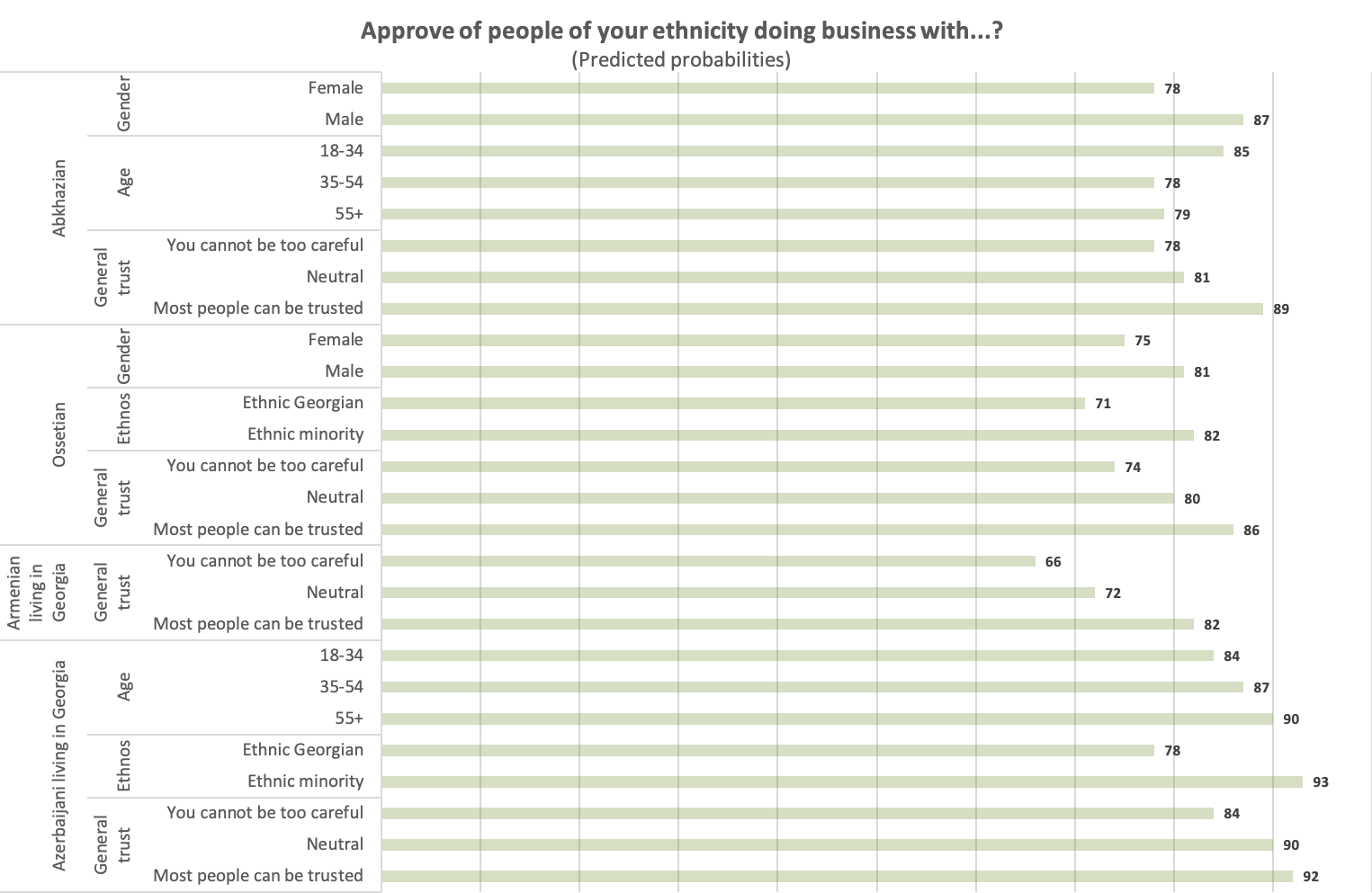 The importance of religion in daily life is associated with acceptance of women marrying all of the ethnic groups considered here. Those that do not find religion important in daily life are notably more accepting of inter-ethnic marriage.

Higher education is also associated with higher levels of acceptance in all cases.

Generalised trust is associated with acceptance of marrying Abkhazians and Ossetians only, with trusting people again being more accepting compared to those who generally have low trust in people.

Age is associated with acceptance of marriage of some ethnicities, with younger age groups again being slightly more accepting compared to older groups.

Settlement type, employment status, and other economic well-being measures are not associated with approval of marrying any of the above mentioned ethnicities, controlling for other factors. 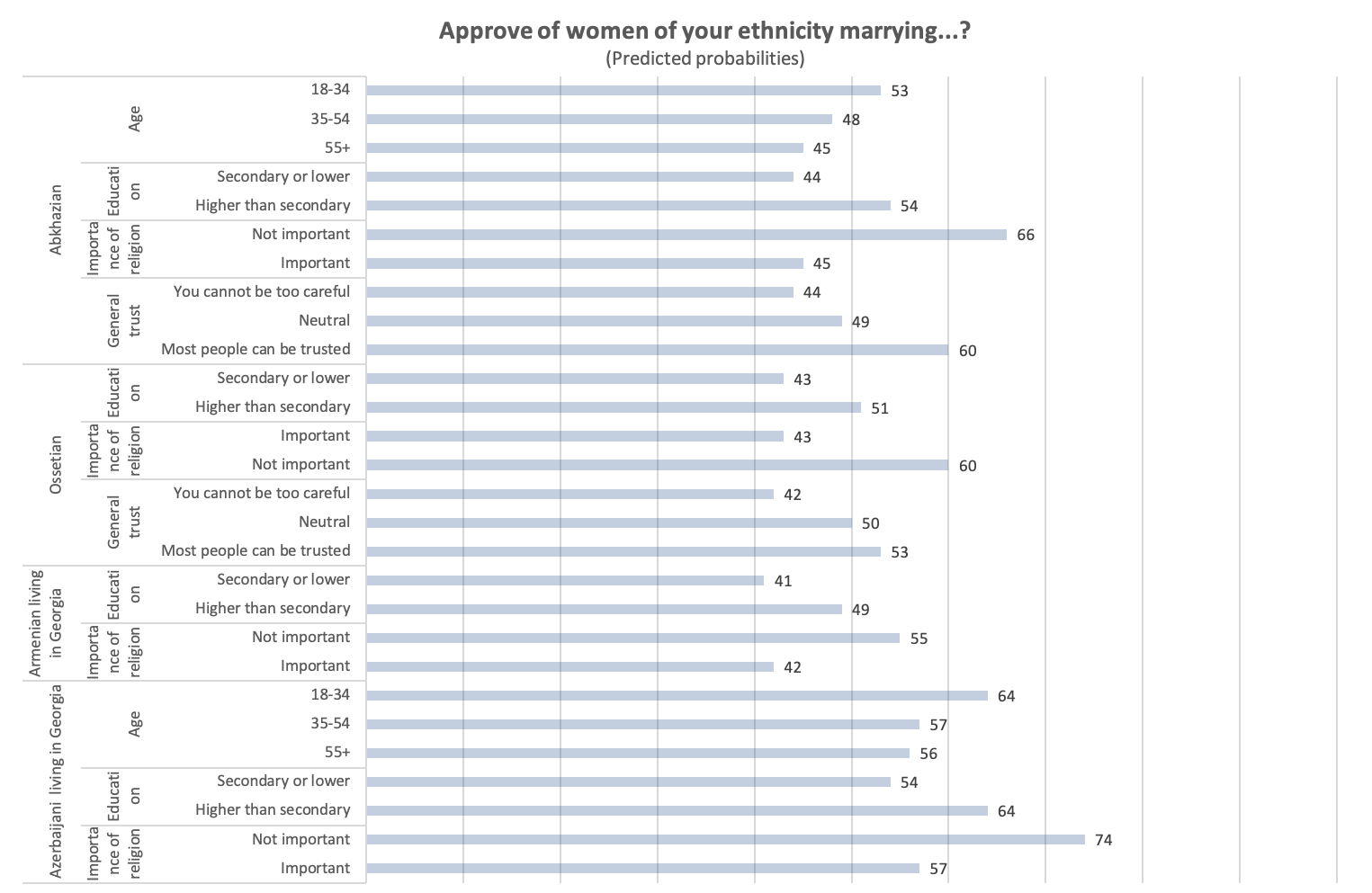 The social distance between the population of Georgia proper and Abkhazians and Ossetians, has changed little over the last decade, at least on the Georgian side of the line. Yet, the data from the last decade shows that the population felt as distant from Abkhazians and Ossetians as they do with Armenians and Azerbaijanis living in Georgia. This demonstrates a challenge for reconciliation with societies on the other side of conflict lines as well as the integration of ethnic minorities into society. While general trust is consistently associated with the approval of inter-ethnic business relations among these groups, the importance of religion in daily life and educational attainment seem to be more important factors in the acceptance of inter-ethnic marriage.

The data used in the article can be found on CRRC’s online data analysis tool.

The analysis of whether people approve or disapprove of doing business or marrying people of another ethnicity was carried out using logistic regression. In all cases, regression models included the following demographic variables: sex (male, female), age group (18–35, 35–55, 55+), ethnic group (ethnic Georgian, another ethnicity), settlement type (capital, other urban, rural), educational attainment (secondary or lower education, higher than secondary education), employment situation (working, not working); economic well-being measures: household total income (medium or high, low or none), how often family does not have money enough for food (often, less often, never); religion related measures: religious affiliation (Orthodox Church, other), frequency of attendance of religious services (frequently, sometimes, rarely, never), the importance of religion in daily life (important, not important); as well as interest in permanent emigration (interested, not interested), generalized trust (you cannot be too careful, neutral, most people can be trusted). These variables were tested independently in separate regression analyses that controlled for the demographic variables.

The views expressed in the article are the author’s alone and do not reflect the views of CRRC Georgia, or any related entity.