Fighting between Armenian and Azerbaijani forces in Nagorno-Karabakh is continuing for the tenth day.

[The news as it happened: Sunday and Monday, Tuesday, Wednesday, Thursday, Friday, Saturday, Sunday, and Monday]

He also reportedly said that Armenia was ‘confident’ that Russia would defend them if necessary.

The European Court of Human Rights (ECHR) has extended interim measures to protect civilians in the conflict to ‘all States directly or indirectly involved in the conflict, including Turkey’.

Armenia requested the measure on 4 October.

On 29 September, after a request from Armenia against Azerbaijan, the court applied interim measures on Azerbaijan and Armenia calling on both to ‘refrain from taking any measures, in particular military actions, which might entail breaches of the [European Convention on Human Rights] rights of the civilian population, including putting their life and health at risk.’

‘It also called upon both parties to comply with their engagements under the Convention, notably in respect of Article 2 (right to life) and Article 3 (prohibition of torture and inhuman or degrading treatment or punishment).’

Read more on the previous ruling: What does the ECHR’s decision on Armenia v Azerbaijan mean?

The heads of nine prominent Azerbaijani NGOs including several human rights organisations have released an appeal to Amnesty International protesting what they called a ‘biased’ statement on Azerbaijan’s use of cluster munitions in Stepanakert (Khankendi).

‘Your position as a human rights organisation on the importance of protecting civilians within the framework of humanitarian law, as well as international human rights is commendable. However, unfortunately, your statement feels biased’ they said.

The statement went on to say that Amnesty International’s statement was mostly about the bombardment of Stepanakert (Khankendi) and Shusha (Shushi), while the shelling of the Azerbaijani cities of Ganja, Tartar, Mingachevir, Barda, Beylagan, Aghjabadi, and Khizi by Armenian forces was not mentioned.

Azerbaijan’s Ministry of Defence has stated that Armenian forces have opened fire on three Azerbaijani districts — Yevlakh, Goranboy, and Beylagan. 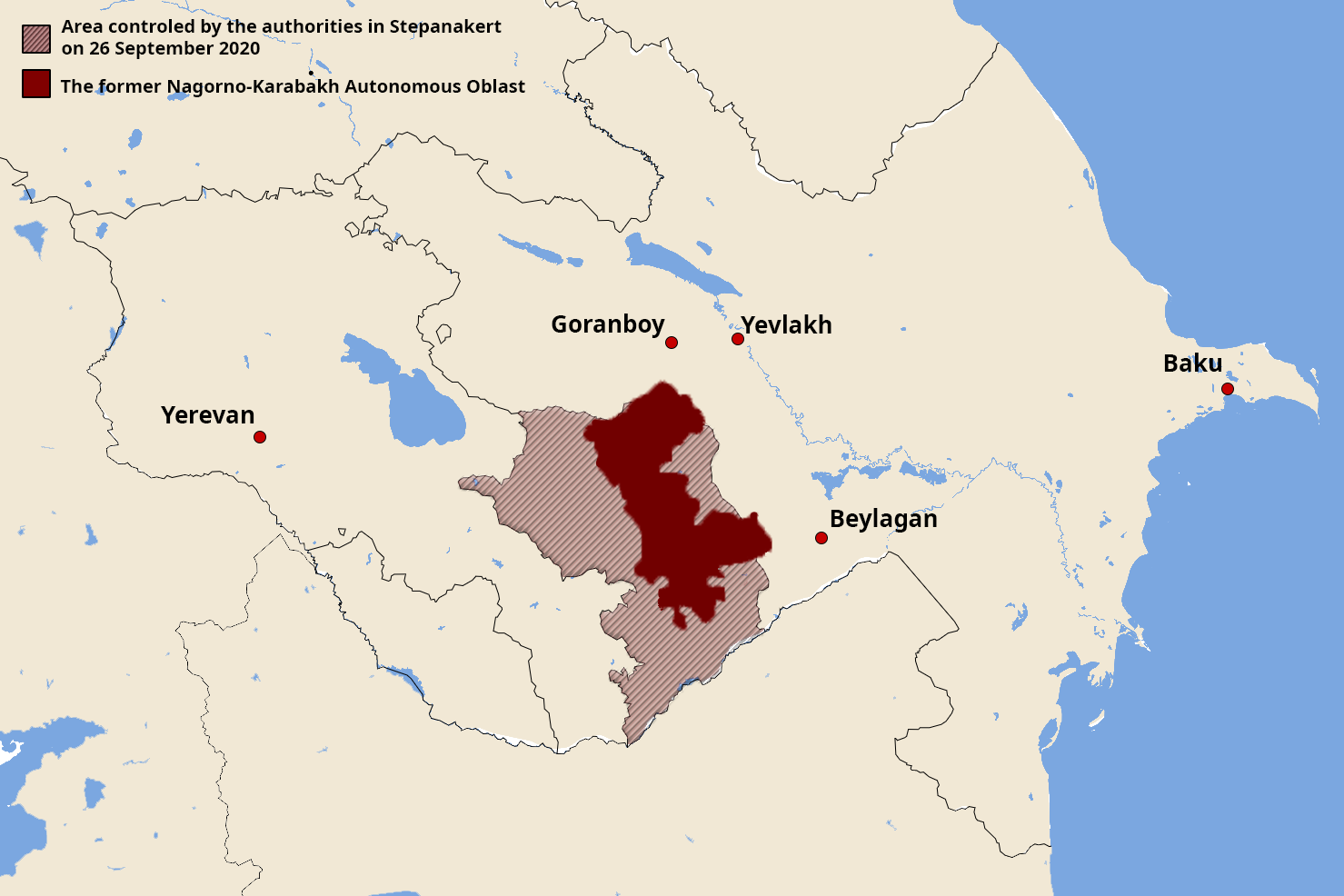 Members of Georgia’s ethnic Armenian community gathered at a stadium in Georgia's southern city of Akhalkalaki today in support of Armenia and of peace.

Participants of the rally held portraits of Armenian soldiers killed during the war and gathered money to donate to the Hayastan All-Armenian Fund as well as aid to send to Armenia.

Those gathered went to Surb Khaj Church after the demonstration to pray together.

The Armenian Embassy in Tbilisi also warned ethnic Armenians in Georgia about ‘disinformation spread online’ that Georgia was preventing humanitarian aid from being delivered to Armenia.

‘Our experts have identified the use of highly destructive cluster bombs and Smerch missiles by the Armenian armed forces against all targets, including civilian and strategic facilities, which are internationally prohibited. Photos and videos proving this are also attached to the appeal’, he stated.

Director of Russia's Foreign Intelligence Service Sergey Naryshkin warned that the South Caucasus region could become a 'new springboard for international terrorist organisations' since, according to him, the conflict around Nagorno-Karabakh has already attracted mercenaries.

It is a matter of ‘hundreds and even thousands of radicals’, Naryshkin claimed today.

The Russian foreign intelligence chief also stated that mercenaries from groups like Jabhat al-Nusra, Firqat Al-Hamza, and Sultan Murad Division, as well as Kurdish extremists ‘are flocking to the conflict zone'.

Sergey Narishkyn noted that it has been ‘the first time that Turkey so openly and unequivocally took Azerbaijan's side’, another ‘fundamentally new factor’ over Nagorno-Karabakh.

A journalist from Russian State news agency Sputnik who is in Stepanakert (Khankandi) has reported that shells have hit near the offices of the Red Cross (ICRC).

Armenian’s Defence Ministry claimed earlier in the afternoon that the Azerbaijani army had launched a large-scale attack in the south of the line of contact.

According to the Ministry, the offensive involved ‘large amounts of military equipment, including tanks and artillery’.

Hundreds of people from Armenia, Azerbaijan, and throughout the world have signed a statement calling for peace in Nagorno-Karabakh. We have republished their statement in full.

In a meeting today, Azerbaijani Minister of Defence Zakir Hasanov stated that the Azerbaijani military will continue combat. The Azerbaijani Defence Ministry reports that he said to ‘continue the planned, purposeful, and consistent destruction of the enemy forces’.

Since last night, there were reports that there was a lull in the fighting over Nagorno-Karabakh.

During the meeting, Aliyev stated that Turkey’s ‘peace policy in the region and in the world’ is already ‘yielding results in both the Middle East and the Caucasus’.

‘Today's situation in connection with another attack by Armenia once again shows that Turkey has a word both in the region and in the world. Of course, this strengthens and inspires us. Today, both our peoples and the whole world see what the Turkish-Azerbaijani union means’.

‘Today we show and prove it in real life’, he said. ‘I think that the future of this union will be a key condition for ensuring lasting peace in the region.’

Cavusoglu said that Turkey sees the possibility of the ceasefire only through the fulfilment of Azerbaijan’s demands.

‘The world must stand by Azerbaijan and international law. All calls are for a ceasefire. There has been a ceasefire until now and what happened? Shortly afterwards, the Armenians attacked again. Let there be a ceasefire, but what will be the result? Can you tell Armenia to "immediately withdraw from the territory of Azerbaijan"?’

‘We have made every effort to resolve this issue peacefully’, he said.

Azerbaijani news organisation Report.az has reported that villages in the Aghdam region have been shelled, damaging local businesses. No injuries or deaths are reported. They also report that the city of Tartar has also been shelled as a result of which ‘civilian houses and facilities were damaged’.

Armenian officials have denied that Armenian forces fired upon Azerbaijani territory today. ‘No fire was opened from any weapon in the direction of Azerbaijan’ wrote Armenian Ministry of Defence spokesperson Shushan Stepanyan.

She called such claims ‘propaganda’ aimed at ‘preparing ground for the resumption of hostilities.’

Earlier in the day, locals reported that an air-raid siren sounded in Stepanakert, but for the moment there is no information about the city being hit by artillery fire.

Spokesperson for Russian President Vladimir Putin, Dmitry Peskov has told journalists that Putin has no clear plans yet on holding talks with Azerbaijani President Ilham Aliyev and Turkish leader Recep Tayyip Erdogan on the conflict in Nagorno-Karabakh. ‘But there is a war in the region and events are developing quickly, so it is difficult to predict’, he added.

‘If it is deemed necessary, there is no doubt about it —  President Putin, of course, will discuss this topic with his counterparts [...] Depending on how the circumstances develop, the need for dialogue will also be formed’, he said.

Yesterday, the OSCE Minsk Group Co-Chairs, composed of Russia, France, and the United States, issued a new statement in which they ‘condemned in the strongest possible terms the unprecedented and dangerous escalation of violence in and outside of the Nagorno-Karabakh zone’.

The statement, co-authored by the Russian Foreign Affairs Minister Sergey Lavrov, French Foreign Minister Jean-Yves Le Drian, and US Secretary of State Michael Pompeo stressed ‘unconditionally’ that ‘disproportionate’ attacks against civilians ‘both along the Line of Contact and on the territories of Azerbaijan and Armenia outside the Nagorno-Karabakh conflict zone’ are an ‘unacceptable threat to the stability of the region’.

‘Over the last several days, certain allegations have been made regarding Canadian technology being used in the military conflict in Nagorno-Karabakh’, a statement from Canadian Foreign Minister Francois-Philippe Champagne reads.

He stated that the Canadian authorities will ‘investigate these claims’, and in the meanwhile, Canada has ‘suspended the relevant exports to Turkey’.

He also called for immediate action to be taken to ‘stabilise’ the situation and stated that ‘there is no alternative to a peaceful, negotiated solution to this conflict.’

Amnesty International has corroborated the use of cluster munitions in the shelling of Stepanakert (Khankandi) over the past several days.

‘Over the weekend, footage consistent with the use of cluster munitions in the city of Stepanakert, the capital of Nagorno-Karabakh, was published by the region’s de facto authorities’, a statement released by the human rights organisation reads.

They identified the ordinance fired upon the city as Israeli-made MO95 DPICM cluster munitions.

‘The use of cluster bombs in any circumstances is banned under international humanitarian law, so their use to attack civilian areas is particularly dangerous and will only lead to further deaths and injuries’, Denis Krivosheev, Amnesty International’s acting Head of Eastern Europe and Central Asia, is quoted as saying.

‘During the visit, Minister Çavuşoğlu will be received by H.E. President Ilham Aliyev and also exchange views on the present situation in Armenian occupied Nagorno-Karabakh region of Azerbaijan as well as on other current regional and international developments with his counterpart H.E. Minister Ceyhun Bayramov’,  a statement by the Ministry reads.