Fighting is continuing for the 20th day over Nagorno-Karabakh, despite a ceasefire being agreed in Moscow.

During a visit to Yerevan, the Foreign Minister of Greece, Nikos Dendias, called Turkey the ‘common denominator’ in ‘tensions and illegal actions […] in Syria, Iraq, Cyprus, Libya, in the Eastern Mediterranean’, adding that ‘Ankara’s intervention in yet another conflict is really worrisome’.

‘It has raised serious concerns internationally’, he added.

They discussed ‘Turkey’s destabilising expansionist policy’, according to the office of the Armenian PM.

Azerbaijan’s President Ilham Aliyev has tweeted that the Azerbaijani Army has taken control over three villages of the Martuni (Khojavand) district. 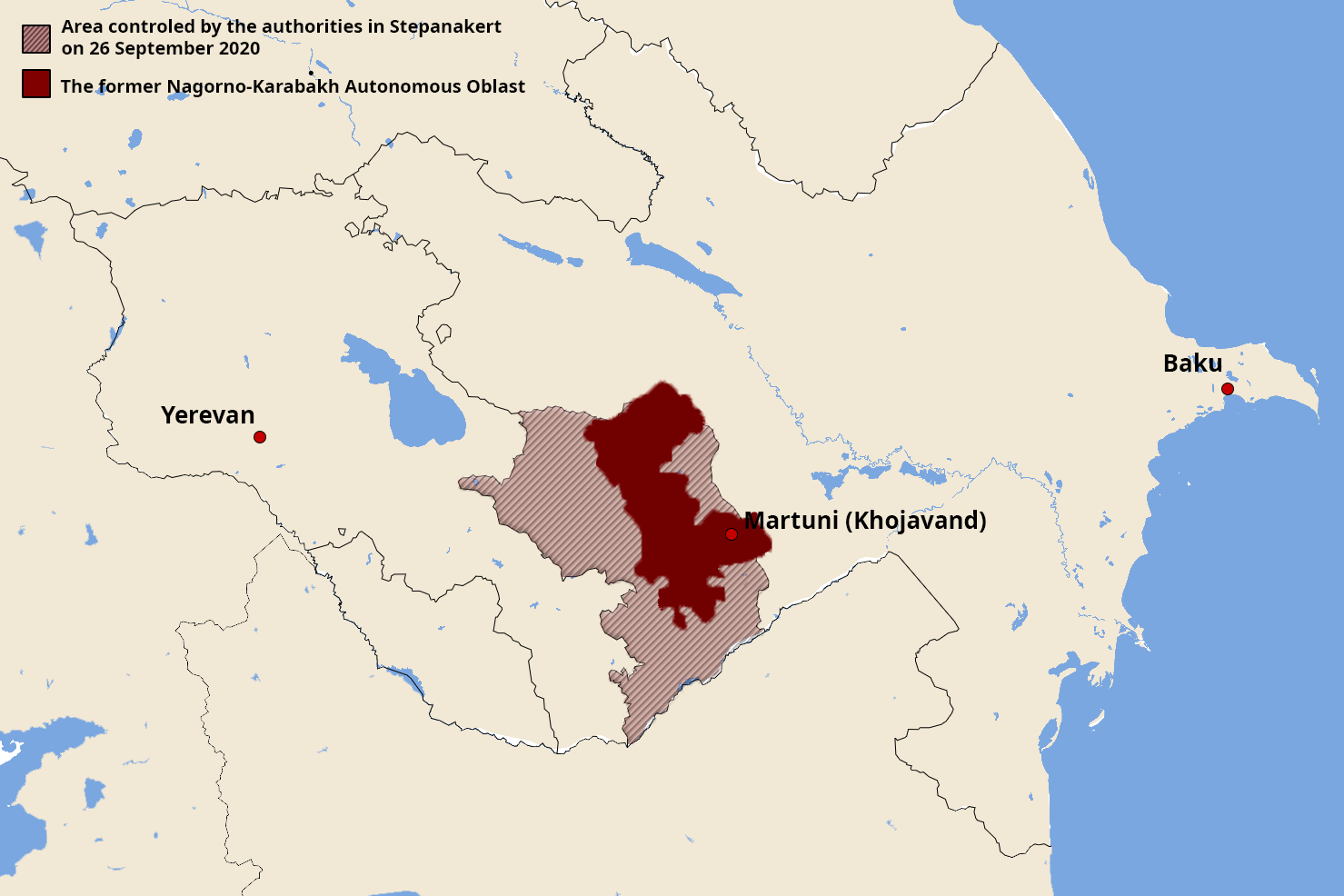 Azerbaijani President Ilham Aliyev and Armenian Prime minister Nikol Pashinyan have outlined the ‘red lines’ for each country in a pair of interviews with RIA Novosti.

Aliyev stated that Azerbaijan ‘will never recognise the independence of Nagorno-Karabakh’.

Pashinyan, said that the right to self-determination of Nagorno-Karabakh was a ‘red line’ for Armenia.

While the Iranian official did not specify which side of the renewed armed conflict his country deemed responsible, Khatibzadeh called the alleged incident ‘unacceptable’.

‘Iran would not remain indifferent in case of a repeat of such attacks’, he warned.

The southern neighbour country of both Armenia and Azerbaijan issued a similar warning on 3 October.

Meeting with the military attache of the Iranian Embassy hours later, Levon Ayvazyan, Head of the Defence Policy and International Cooperation Department at the Armenian Defence Ministry, accused the Azerbaijani armed forces of using the border with Iran as ‘cover’ while carrying out attacks from those areas.

Ayvazyan 'conveyed the warning’ of the Nagorno-Karabakh Defence Ministry that they intended to fire on Azerbaijani armed forces situated at the border unless the situation changed. He said that the military-political leadership of Azerbaijan ‘would be held responsible for the consequences’.

The Armenian Ministry of Economy has drafted a law to prohibit the import of goods of Turkish origin for six months starting from next year.

The ministry named Turkey's ‘open support’ for Azerbaijan during the war as the reason for the move.

The ministry assured the public that the law would not result in shortages of products in Armenia as they would be supplemented with those produced locally and imported from the other countries.

A video circulating online appearing to show Azerbaijani forces executing two captives is the latest evidence of war crimes during the fighting in Nagorno-Karabakh.

An investigation by Bellingcat concluded that the video was likely genuine, and geolocated it to a square in the town of Hadrut, the focus of some of the most intense fighting in recent days.

Both sides have also accused each other of deliberately targetting civilian population centres and infrastructure.

The Evangelical-Baptist Church of Georgia organised a prayer for peace today attended by Armenian and Azerbaijani clergy of different religious denominations.

They read excerpts from the Gospel and the Quran in Georgian, Armenian, Yezidi, and Arabic languages.

According to the Church, the Armenian and Azerbaijani clergy thanked the Peace Cathedral for the initiative and later exchanged words of hope for a peaceful future.

‘We, the Yezidi, Muslim, and Christian clergy gathered at the Peace Cathedral agreed to commit ourselves to observe vigils for peace and reconciliation between Armenia and Azerbaijan every week until the war is over. The vigil will be held at Peace Cathedral every Saturday at 19:00’, reads the statement published after the prayer.

They called on all churches, synagogues, mosques, and temples to offer prayers for peace every Saturday at 19:00 until the war ends.

These included highways connecting France to Spain, Switzerland, Italy and Belgium, Belgium to the Netherlands, the Netherlands to Germany, Luxembourg to Belgium and France, and Germany to Denmark.

Protesters were demanding the international recognition of Nagorno-Karabakh as independent and calling for the condemnation and cessation of the ‘Turkish-Azerbaijani-terrorist aggression’ against Nagorno-Karabakh.

We declare that no missile was fired in the direction of the Ordubad region of #Nakhichevan, this is another lie of the #Azerbaijani military-political leadership, which aims to expand the geography of the conflict.

Azerbaijan’s Ministry of Defence has claimed that Armenian forces have fired on a city in the Autonomous Republic of Nakhchivan.

They stated that a rocket was fired at 10:44 yesterday from an area in the south-west of Nagorno-Karabakh and exploded in the city of Ordubad. 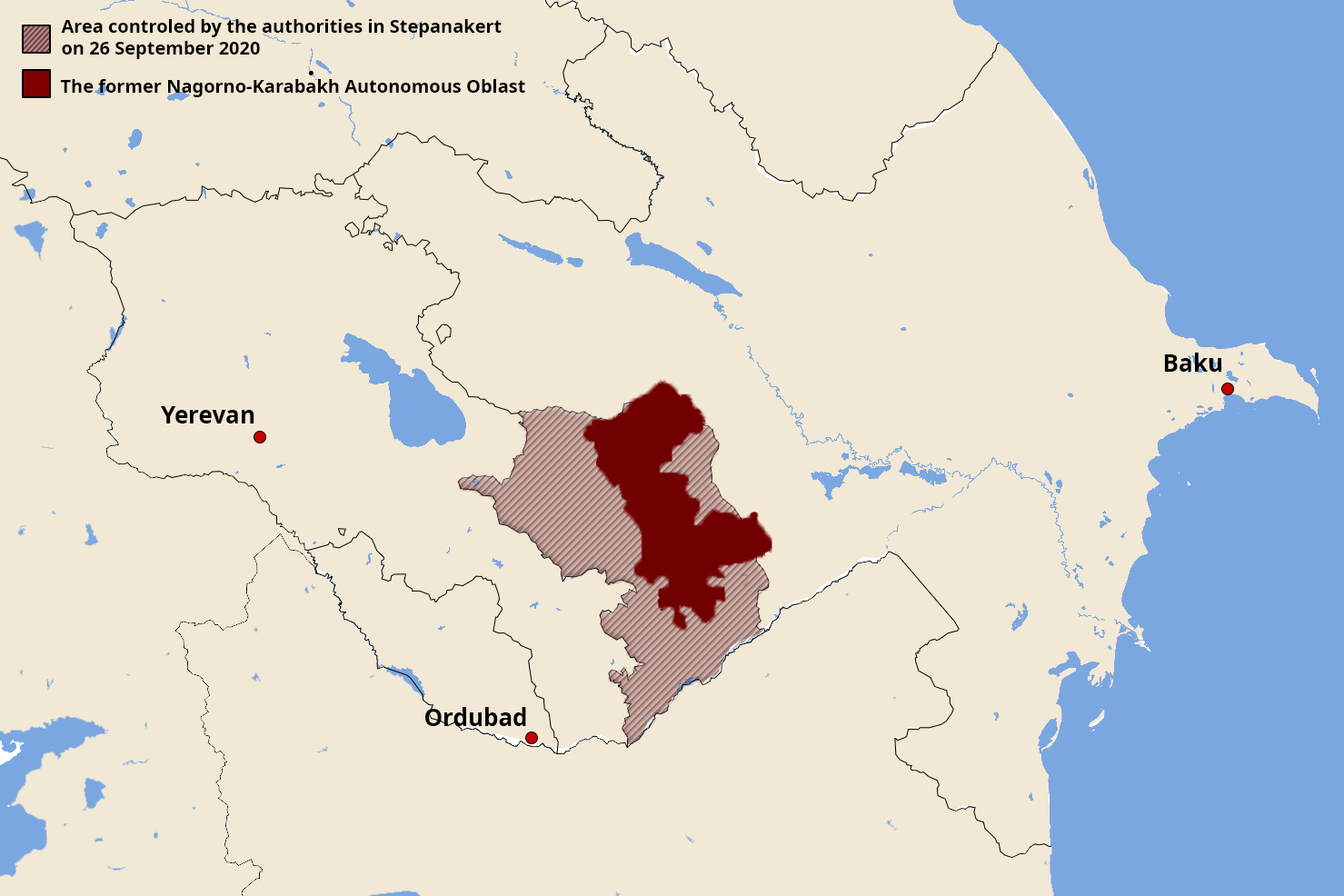 ‘No civilians were injured or civilian objects were damaged’, the statement reads.

Luxemburg’s parliament has condemned ‘any military initiatives’ breaking the 1994 ceasefire clauses. It has also denounced any external support to one of the belligerents, ‘in particular Turkish military support to Azerbaijan’.

Azerbaijan’s Foreign Ministry said today that 3 children had been killed and more than 15 injured since the war broke out.

The Ministry accused Armenia of 'racist and xenophobic policy' for 'targeted attacks on civilians’, including children.

Dozens of civilians on both sides have died in shelling of major population centres.

The Estonian government is to give €100,000 ($117,000) to the Red Cross to help alleviate the humanitarian situation in Nagorno-Karabakh, Estonian Public Broadcasting (EER) has reported.

‘The situation on both sides of the front in Nagorno-Karabakh borders on a humanitarian crisis, which is why we cannot remain mere spectators’, Foreign Minister Urmas Reinsalu reportedly said.

‘We call on the parties to end military action in Nagorno-Karabakh and resolve the conflict peacefully. Third countries should refrain from any interference to avoid a further escalation of the situation.’

Speaking about the conflict with WSB Atlanta US Secretary of State Mike Pompeo has said America was ‘hopeful that the Armenians will be able to defend against what the Azerbaijanis are doing.

‘The resolution of that conflict ought to be done through negotiation and peaceful discussions, not through armed conflict, and certainly not with third party countries coming in to lend their firepower to what is already a powder keg of a situation’, Pompeo said.

‘We – we’re hopeful that the Armenians will be able to defend against what the Azerbaijanis are doing, and that they will all, before that takes place, get the ceasefire right, and then sit down at the table and try and sort through this – that is – what is a truly historic and complicated problem set.’