A new ceasefire agreement reached by Armenia and Azerbaijan is due to come into force at 00:00 on 18 October following 21 days of fighting.

French President Emanuel Macron has welcomed the truce between Armenia and Azerbaijan, according to a statement released by the Élysée Palace.

‘The President of the Republic welcomes the humanitarian truce announced jointly this evening by Armenia and Azerbaijan, following a French mediation conducted over the last days and hours, in coordination with the co-presidents of the Minsk group.’

‘This ceasefire must be unconditional and strictly observed by both parties. France will be very attentive to this and will remain engaged so that hostilities cease on a lasting basis and that credible discussions can quickly begin.’

France, along with Russia and the US, is one of the co-chairs of the OSCE Minsk Group, which was established to mediate the Nagorno-Karabakh conflict.

Armenia and Azerbaijan have agreed to a humanitarian truce to begin at midnight tonight both sides have confirmed.

‘The Republic of Armenia and the Republic of Azerbaijan have agreed to a humanitarian truce as of October 18th, 00h00 local time’, the Armenian Foreign Ministry said in a statement.

The Azerbaijani Foreign Ministry also confirmed they had agreed to a ‘temporary humanitarian ceasefire’ from 00:00 local time on 18 October.

The announcement follows phone calls between Russian Foreign Minister Sergey Lavrov and his Armenian and Azerbaijani counterparts earlier this evening.

According to the Russian Foreign Ministry, during the calls, ‘the need to strictly follow the provisions of the Moscow statement of the Ministers of Foreign Affairs of the Russian Federation, the Republic of Azerbaijan and the Republic of Armenia of 10 October, providing for a ceasefire for humanitarian purposes, was stressed.’

‘The importance of the agreement reached in Moscow on the start of substantive negotiations with the aim of an early achievement of a peaceful settlement based on basic principles through the mediation of the OSCE Minsk Group co-chairs was reaffirmed’, their statement said.

The EU’s External Action Service has condemned a missile strike last night on the city of Ganja.

‘The European Union deplores the strikes on the Azerbaijani city of Ganja during the night of 16–17 October resulting in civilian loss of life and serious injury. All targeting of civilians and civilian installations by either party must stop’, their spokesperson said in a statement.

‘The ceasefire of 10 October must be fully respected without delay.’

The Azerbaijani Embassy in Moscow has sent a note of protest to the Russian Foreign Ministry over the visit of State Duma MP Vitaly Milonov to Nagorno-Karabakh, TASS reports.

‘Such provocative actions of the deputy of the State Duma of the Russian Federation aroused fair indignation both in the Azerbaijani public and the large diaspora in Russia, and are aimed at deteriorating Russian-Azerbaijani relations’, the note reportedly said.

The Georgian Foreign Ministry has vowed a ‘harsh’ response if evidence is found that civilian flights through Georgian airspace are being used for military purposes.

‘In recent days, the media, unfortunately, continues to speculate about possible military shipments through Georgian airspace’, they said in a statement.

‘Georgia has closed its airspace for military flights, which we have publicly stated. As for civilian and humanitarian flights, Georgia is sincerely fulfilling its international obligations in this area.’

‘First and foremost, it is the responsibility of carrier countries to conduct civilian flights in accordance with the principles and standards of the Chicago Convention, which prohibits the purposeful use of civilian flights for military purposes.’

‘In the event of a breach being found and there is solid evidence, Georgia will respond harshly and violators will be held accountable under international law.’

President Ilham Aliyev has claimed that Azerbaijani forces have taken over the city of Fuzuli (Varanda) in southern Nagorno-Karabakh, as well as seven nearby villages. 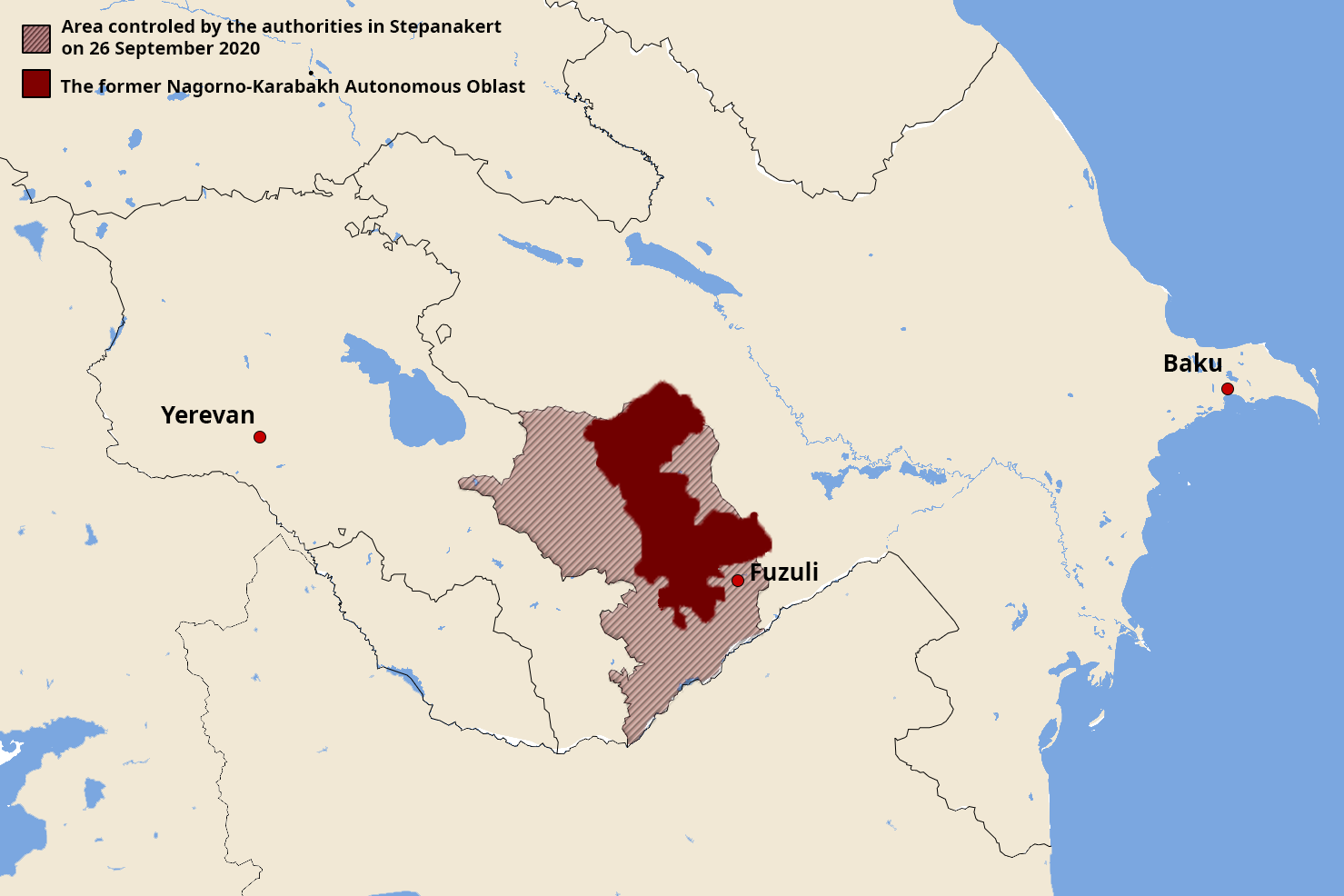 The UN Security Council will hold a closed-door meeting on Monday to discuss the situation in Nagorno-Karabakh, Ria Novosti reports citing a source in the security council.

They reported the meeting was called by Russia, France, and the US, the co-chairs of the Minsk Group, which mediates the Nagorno-Karabakh conflict.

Armenian Defence Ministry spokesperson Shushan Stepanyan reported in the early hours of the morning that two drones had been shot down in Armenian airspace.

Air defense units of the Armed Forces of #Armenia shot down two enemy UAVs in the airspace of the Republic of Armenia.

A missile strike in the early hours of the morning on Azerbaijan’s second-largest city, Ganja, has left at least 10 people dead and 40 wounded, Azerbaijani officials report.

Officials also reported a rocket attack on the city of Mingachevir; no casualties were reported.

There were also artillery strikes overnight on Stepanakert, which has been hit almost daily since fighting begun.